Capturing the now: A catwalk turned into a Metaverse story

What was expected to be a graduation show turned into a 360° immersive experience. This is what happened during Istituto Marangoni Shanghai’s latest event showcasing the most talented Gen Z graduates as part of ZETA. With the 3D CGI (Computer Graphic Imagery) film “ZETA 3022” presented before the “ZETA” 2022 Best Graduate Show, the catwalk warm-up turned into a multimedia performance that placed ZETA as one of the most innovative runway shows on the Bund skyline river, inside the futuristic setting of the Temple of Light. There, 36 looks from 12 collections were presented on a physical catwalk, while other creations were unveiled in the most amazing movie you have ever seen. 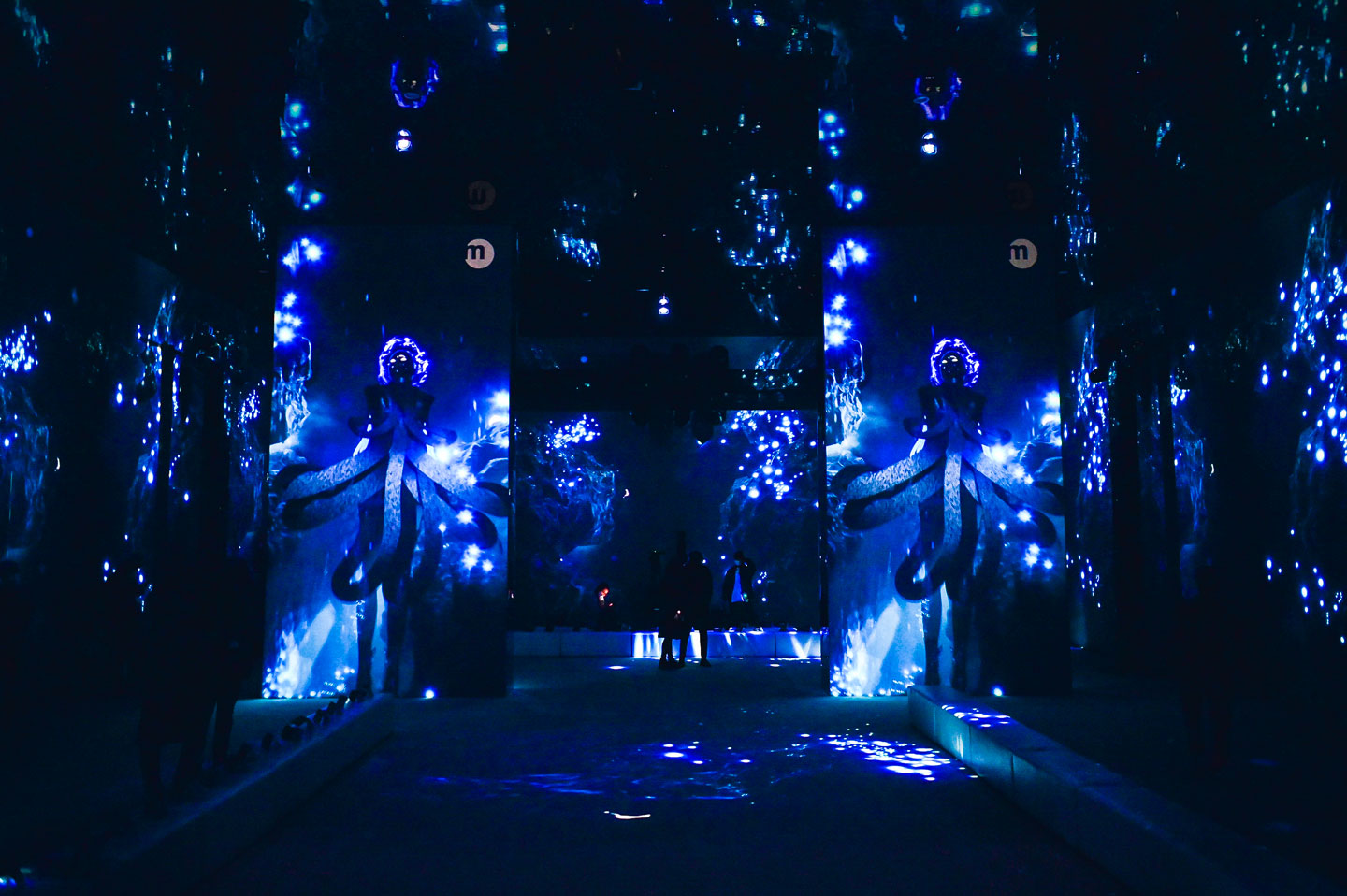 The story behind “Zeta 3022” is simple yet complex, and no one can explain it better than its creators. We caught up with Istituto Marangoni Shanghai’s Fashion Business student Kang Jiaxuan and Ji Jia, a creative director and a writer, who conceived the multiverse where different avatars were designed in their physiognomic and virtual outfits and role-played in this futuristic, meta-dystopian digital world.

“The idea was to imagine how the world might end up if concern for the environment did not become a priority issue for our generation,” stated Kang Jiaxuan. “At the same time, inspired by a brief with our mentors, Pronounce’s Jun Zhou and Yushan Li, we rediscovered and reinterpreted ancient Chinese mythology and relocated this to a cyberpunk era in 3022.” 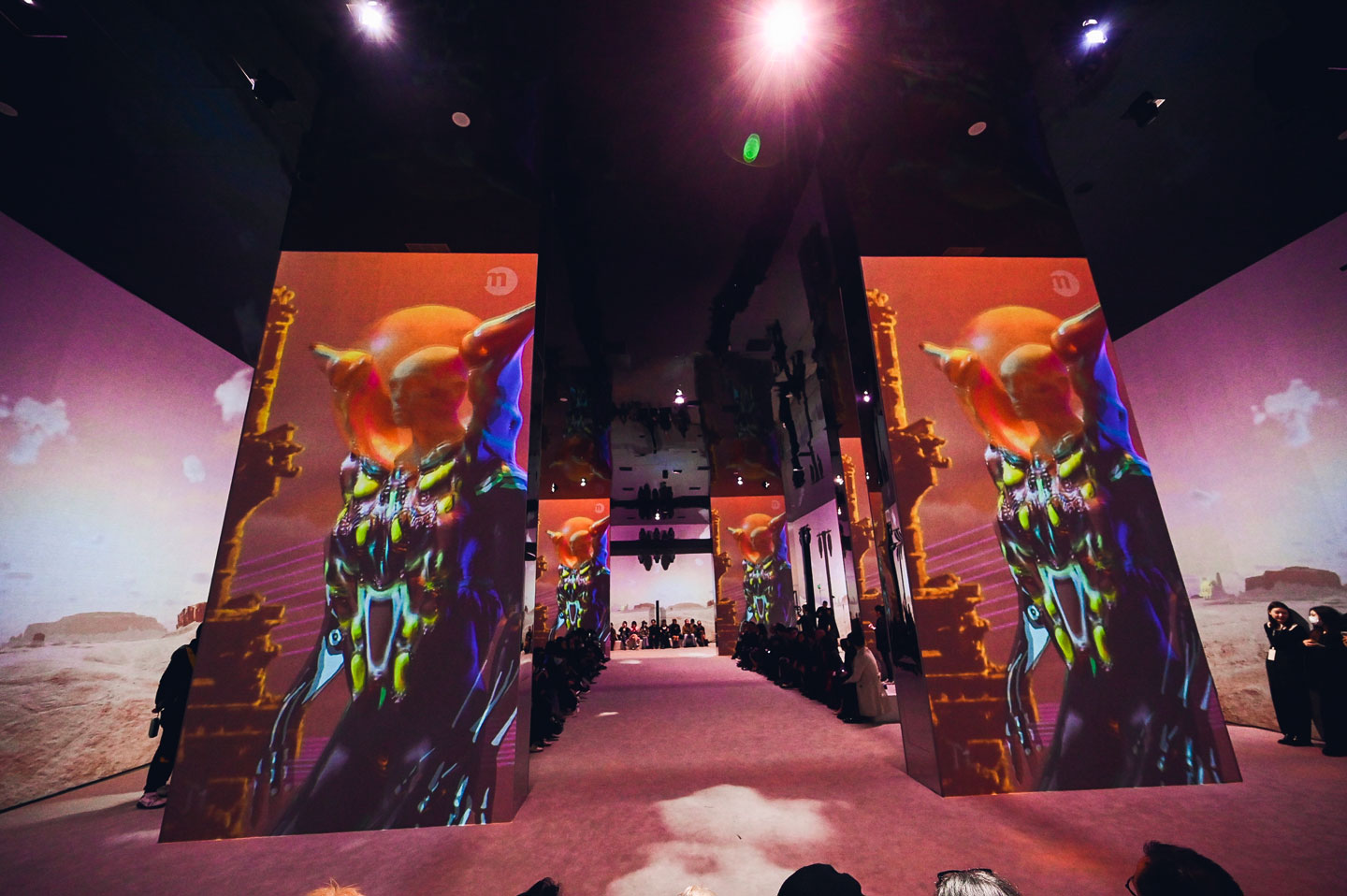 Let’s get one thing straight. The film “ZETA 3022” was produced under the mentorship of Istituto Marangoni alumni Zhou Jun and Li Yushan, founders of the pioneering independent brand Pronounce, based in Milan and Shanghai.

As Kang Jiaxuan explained, the film’s entire storyline focused on rethinking animals from Chinese mythology and gave rise to cyberpunk digital images with four capsule collections captured on digital avatars. With their imaginations unleashed, Istituto Marangoni’s emerging designers Zhou Jie, Liu Yubing, Lan Yutong, Qi Linghui and He Haoliang blazed a trail in the Web3 environment. They interpreted the conflicts and beliefs of human existence in the future world as they relate to the impact of environmental changes and technological advances.

It is no coincidence that the challenge to push students beyond the limits of physical design comes from Istituto Marangoni, a metaverse and metaverse education pioneer. This was made clear with the launch of The Talent District: a virtual platform for showcasing events, collaborative projects and student work, Istituto Marangoni’s metaverse broke new ground for meta-fashion by combining interactive experience, Web3 technology, digital language and the international creativity of its talents around the world.

Also in Shanghai, Istituto Marangoni’s education meets the metaverse with “ZETA 3022,” where a futuristic meta-world is divided into five districts, where five new metahuman races live and preserve a form of existence.

“The “ZETA 3022” world districts range from a post-apocalyptic desert and an underworld dry sea to a flying burning forest and a stardust sky,” Kang Jiaxuax told us. “In this meta-allegory, only five races have survived, all related to the five animal groups of the Chinese Zodiac: a hybrid between a Dog and a Rabbit, a Water Dragon, the traditional Dongbei Tiger, the Rat and the Snake.”

These five themes were assigned to five designers who imagined and created two avatars each in an exciting process and journey exploring the fine line between fashion and character design.

“I feel fashion design and character design are more related than one would think,” said He Haoliang, who designed both Snakes avatars and presented her collection The Rite of Spring. “I named my avatars The Healers because snake poison has strong healing properties and is used in research to treat degenerative diseases. As I aimed to show two moods, my collection is both romantic and about rebirth, and my snakes are wise and noble. A designer should show what is not visible at first sight.” 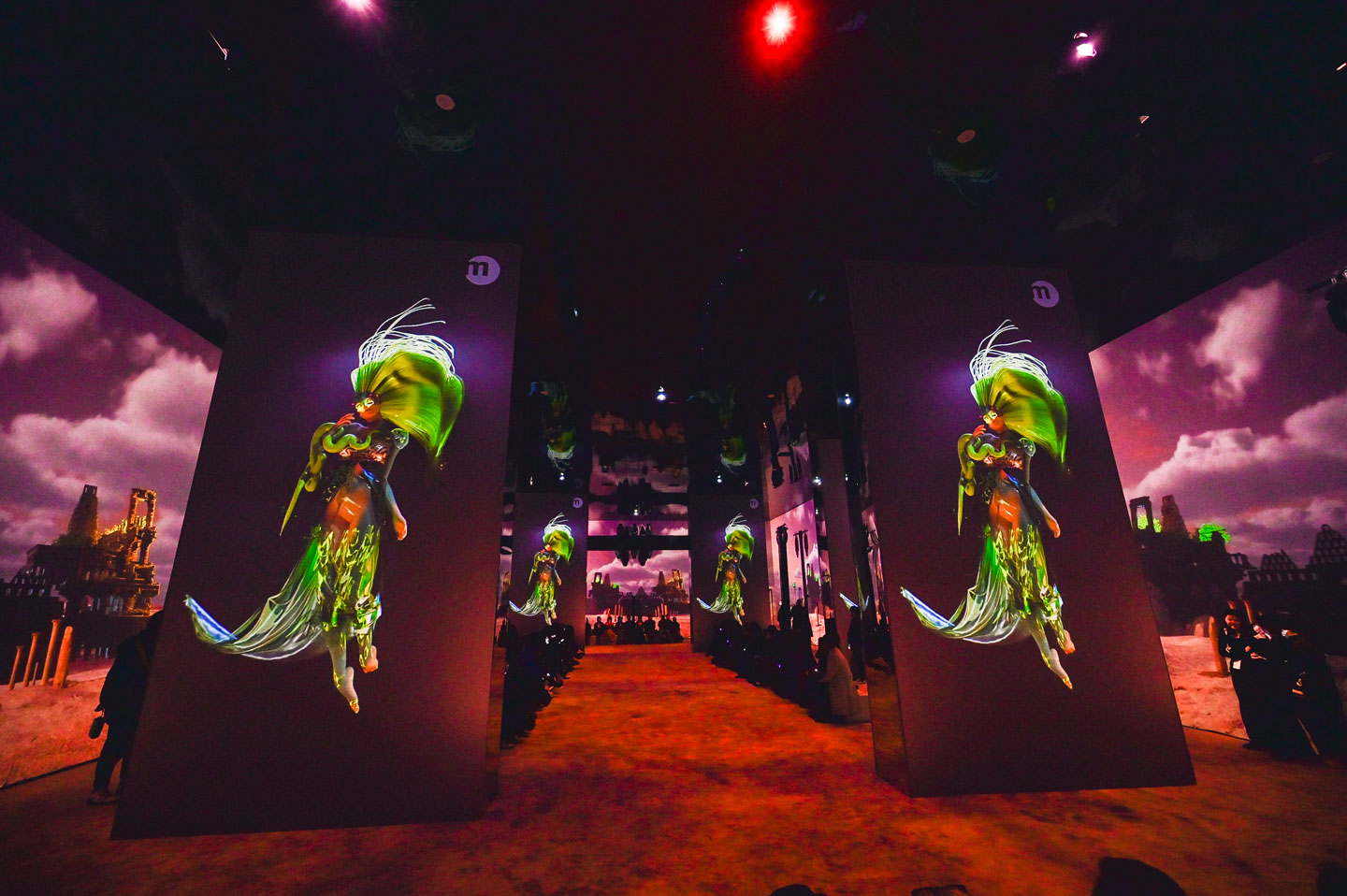 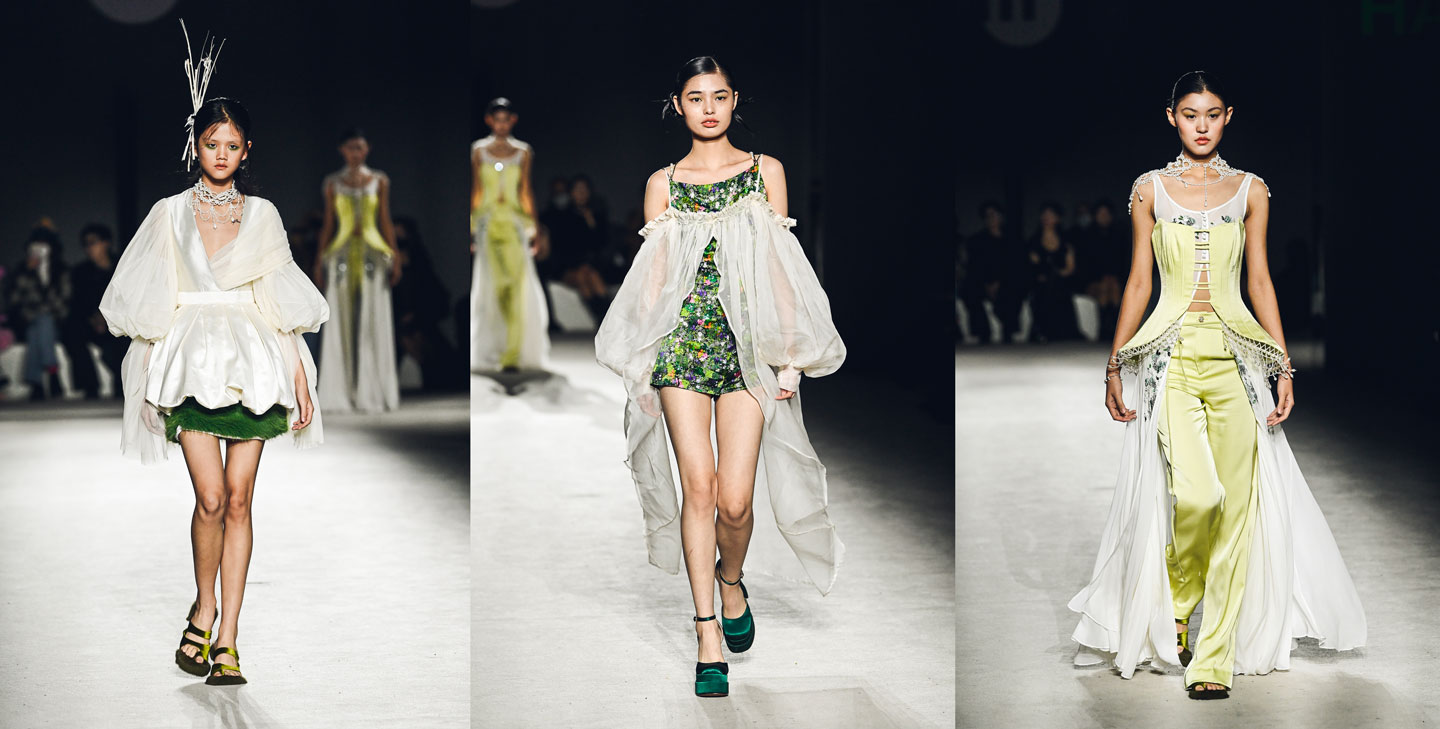 While celebrating the best designer of the year, the 2022 edition of the Istituto Marangoni Shanghai graduate show introduced an extra award for the best avatar. Having designed the most mind-blowing avatars, Liu Yubing was voted as the creator of the most mind-blowing virtual design project unanimously by the IM Shanghai academic team and mentors Jun Zhou and Yushan from Pronounce. “Called The Speakers, my avatars are the legacy of the mouse in the Chinese zodiac, an animal symbolising wisdom and perseverance,” detailed Liu Bing. “The Speakers represent memory; they carry the ancient Chinese ideograms in their bodies and on their skins to save history and preserve the existence of humanity.” 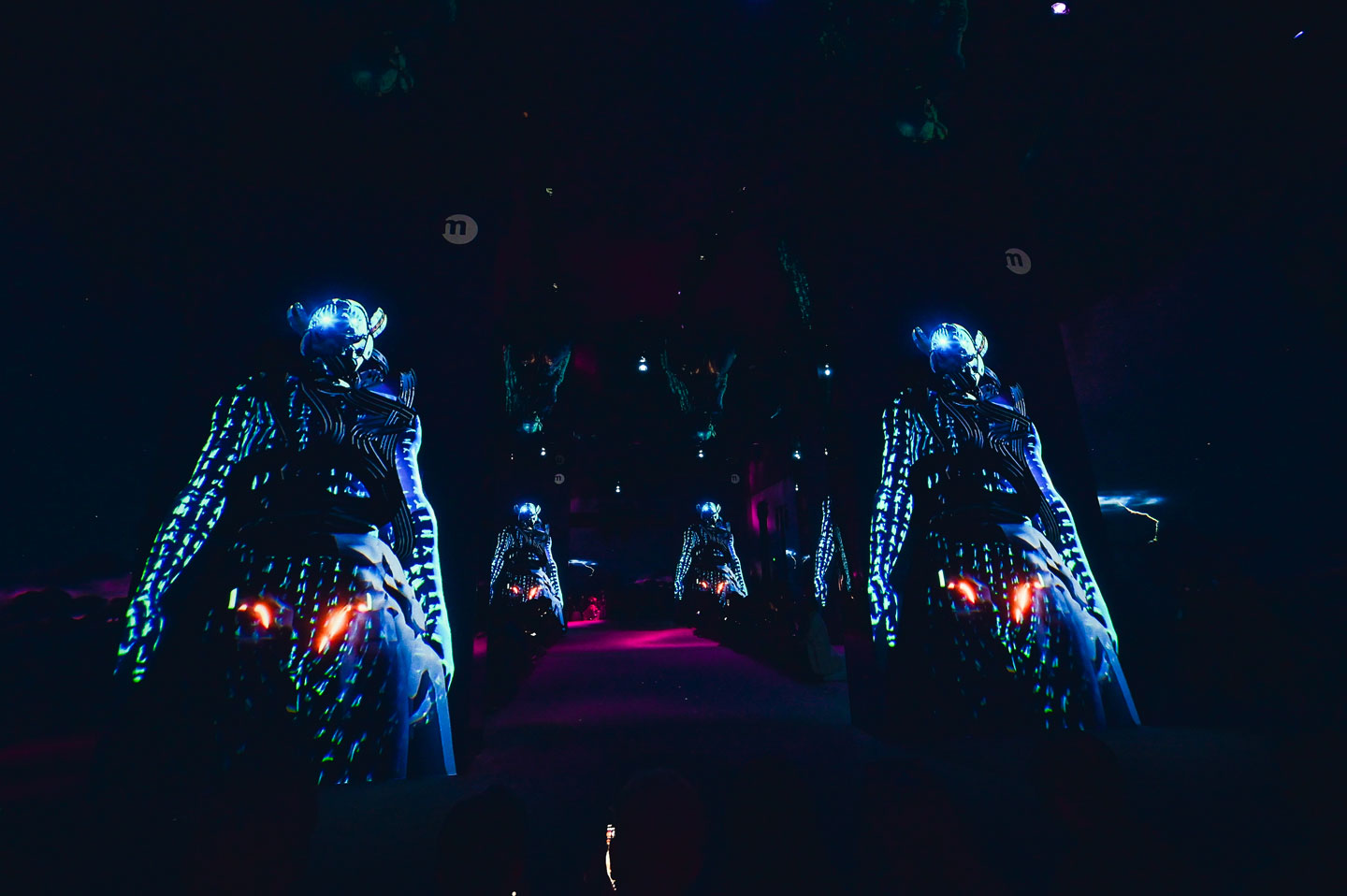