All the best from the Istituto Marangoni show in Shenzhen

The author looked back at the best moments of the latest Istituto Marangoni Shenzhen Awake graduate show by splitting his story into chapters. The chapter headings quote verses from the lyrics of It’s a Fine Day. Originally performed by Jane in 1983 and later by Opus III Peter Koenemann/Alex Christensen, this song was used to open their catwalk.

Sixteen marvellous Istituto Marangoni Shenzhen students as raising designers just appeared at Shenzhen Fashion Week spring-summer 2023. There, they hatched their final works while investigating the dreams and the horrors of our times and moulding them into fantastic silhouettes of fabrics and colours. 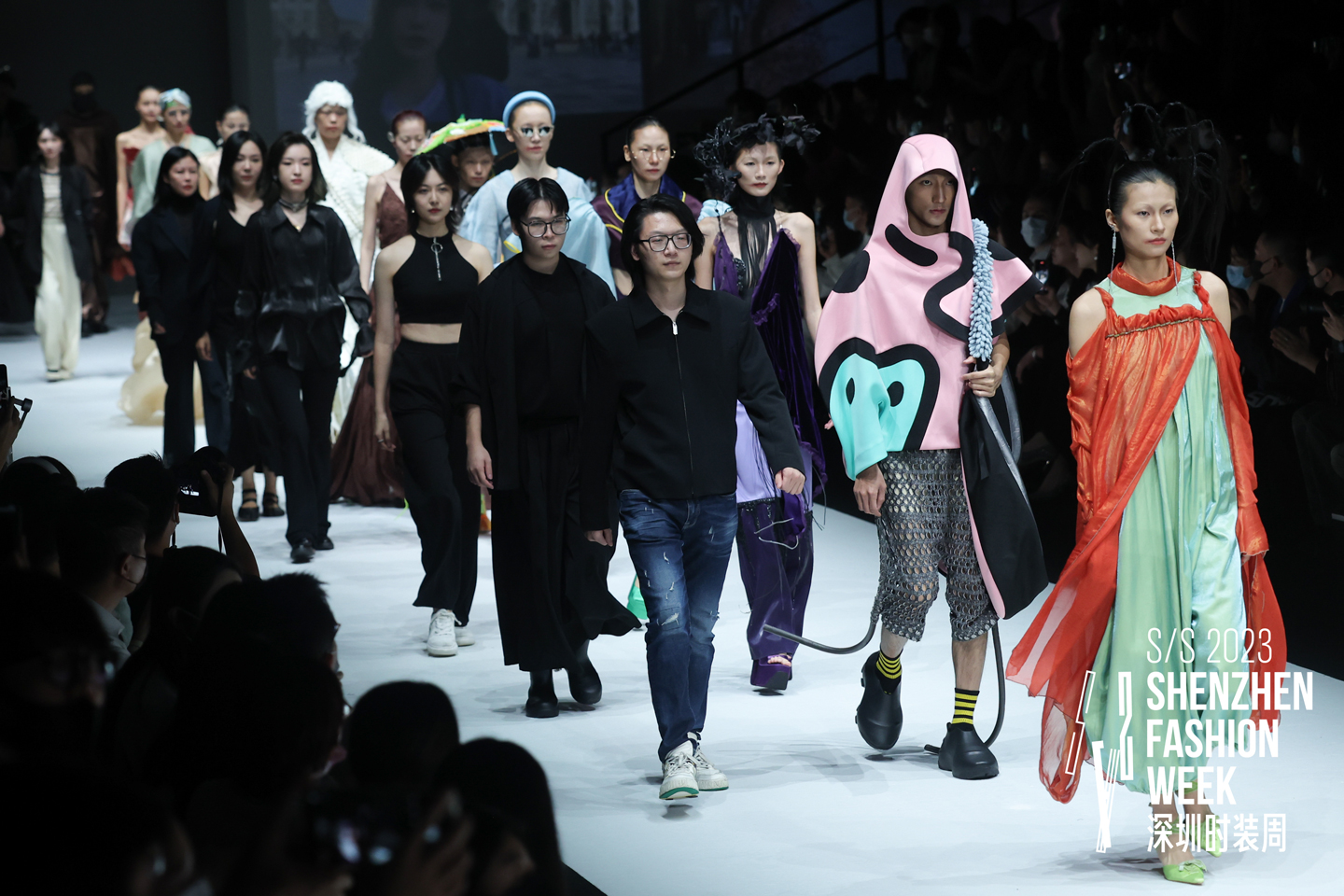 With a focus on green and sci-tech innovation in the fashion industry, the theme of Shenzhen Fashion Week spring-summer 2023 was “We Can Be.” The eight-day event included more than 70 runway shows, 30 creative activities, and exhibitions and forums on sustainable fashion development.

Under the name Awake, that show expressed the urge to reconnect with our self-awareness and jointly protect a more conscious human homeland.

The concept was developed in every detail under the art direction of the Istituto Marangoni Shenzhen professional show team. A genderless selection of non-traditional beauty models stood as a representation of the now. As if one slept in make-up and suddenly woke up was the unified make-up, revealing a white powdered doll-like face, eyebrows concealed by heavy theatre paste, and a peached tone smudged lipstick. A sleek, laid-back glossy hairstyle recalled a wild night out.

The running order of the collections revealed nuances from ready-to-wear to haute couture surrealism in an accumulation of tensions that could only be dissolved with a (metaphorical) final bang. 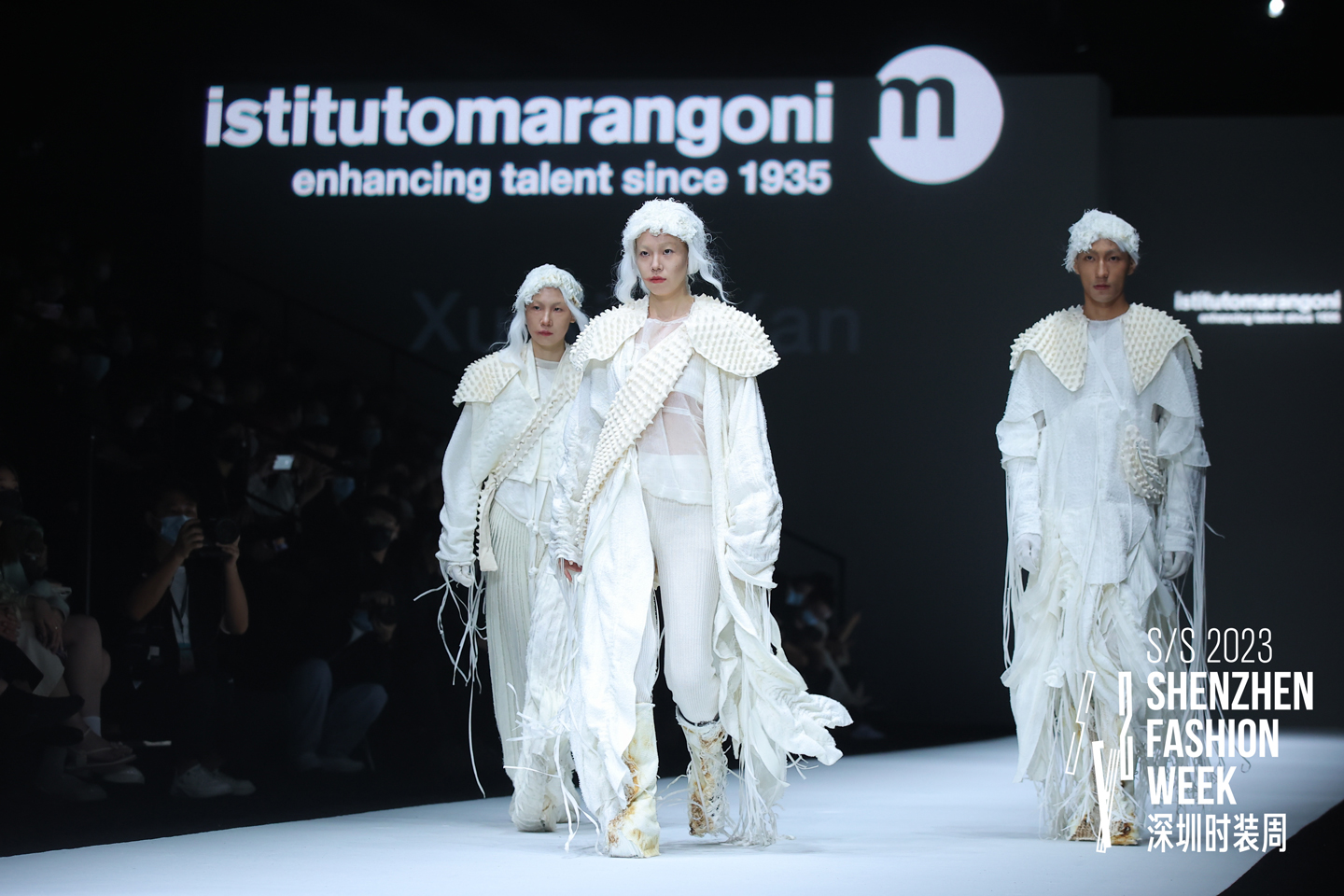 We appreciated the meticulous oeuvre of some designers in decoding Chinese cultural heritage inspirations into a fresh blend of modernity. Such was the case with Xu Xiaoyan’s multi-layered white-washed Beijing Opera looks. Xu Xiaoyan’s textile designs featuring majestically custom-made knitwear embody the Chinese idiom Flowing Clouds and Flowing Water. Hence, each item can be adjusted on the body with a waterfall of functional, extended drawstrings that become tangling frills to reveal the mystery of art itself. 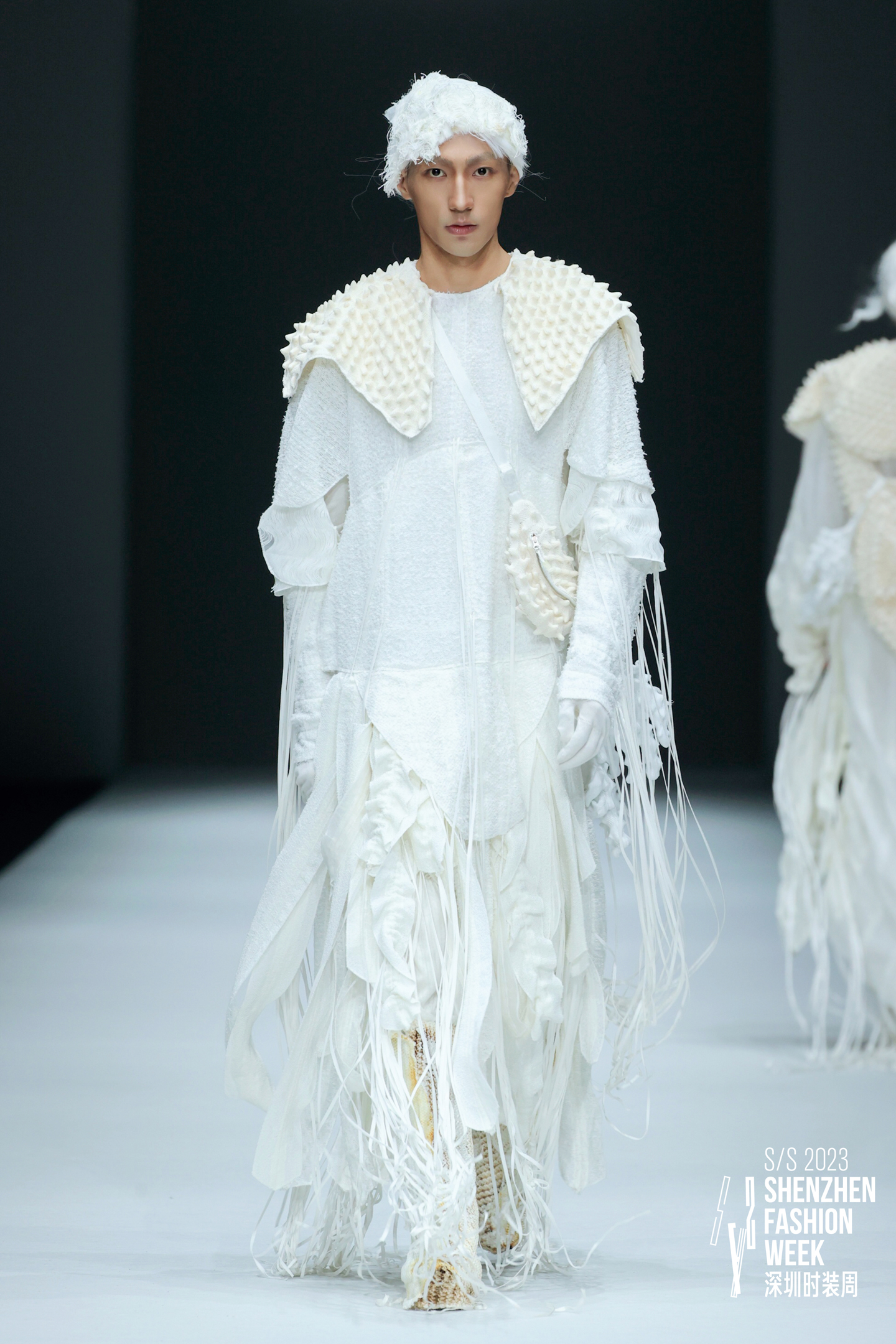 As for Xinrui Huang, she took inspiration from a jigsaw puzzle project on the Aphantasia condition, creating a striking weaving manipulation bearing a deconstructed picture of her younger brother. The outcome, most visible on a hobble skirt, encourages one to collect the fragments about this world carefully, recombine them and create one’s universe of memory – the Memory Reorganisation. 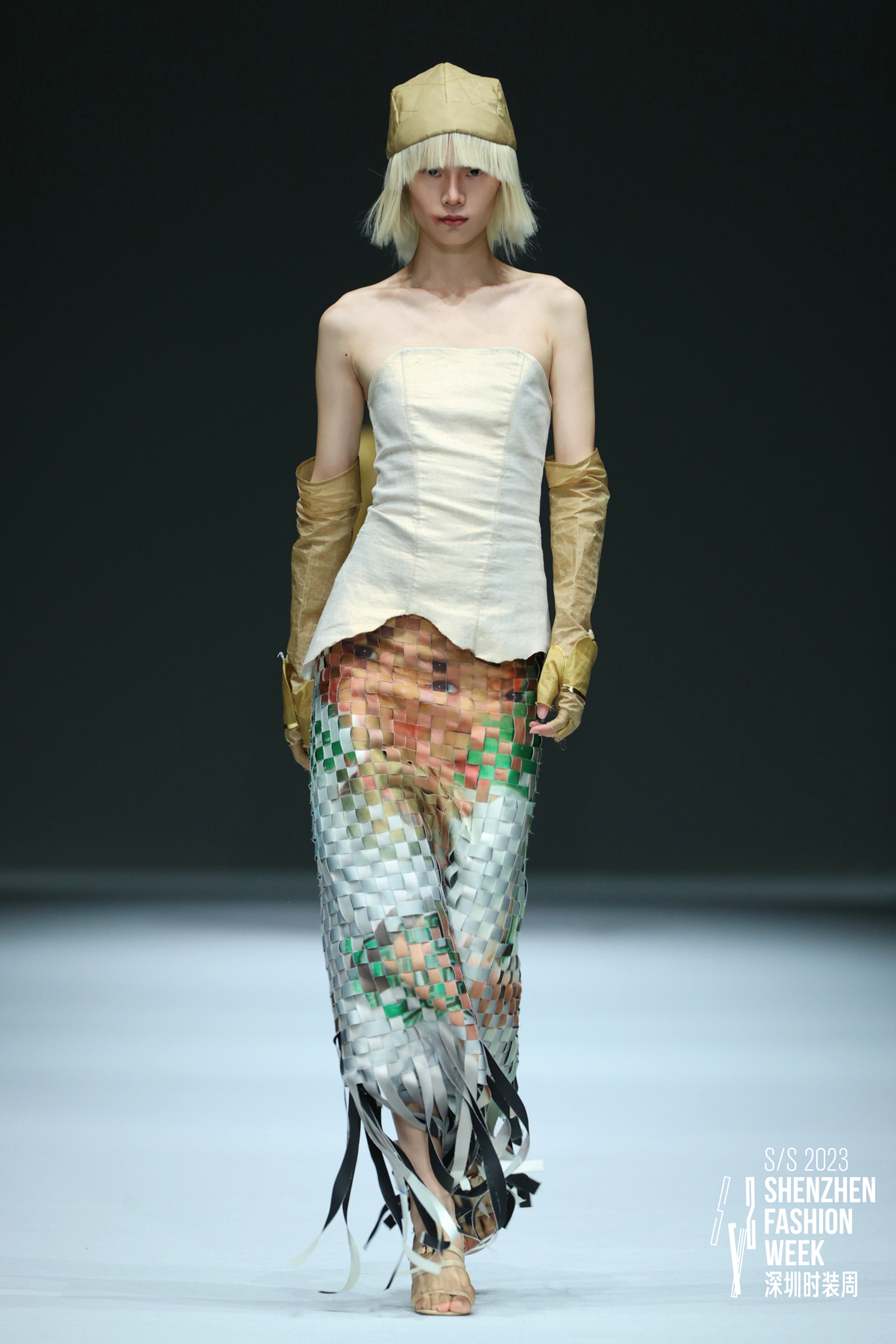 At Jiayi Feng, bizarre creations magnify the feeling of gravity as skin/fat versus wet/dry fold around our bodies. It may be a process of reincarnation in some ways. 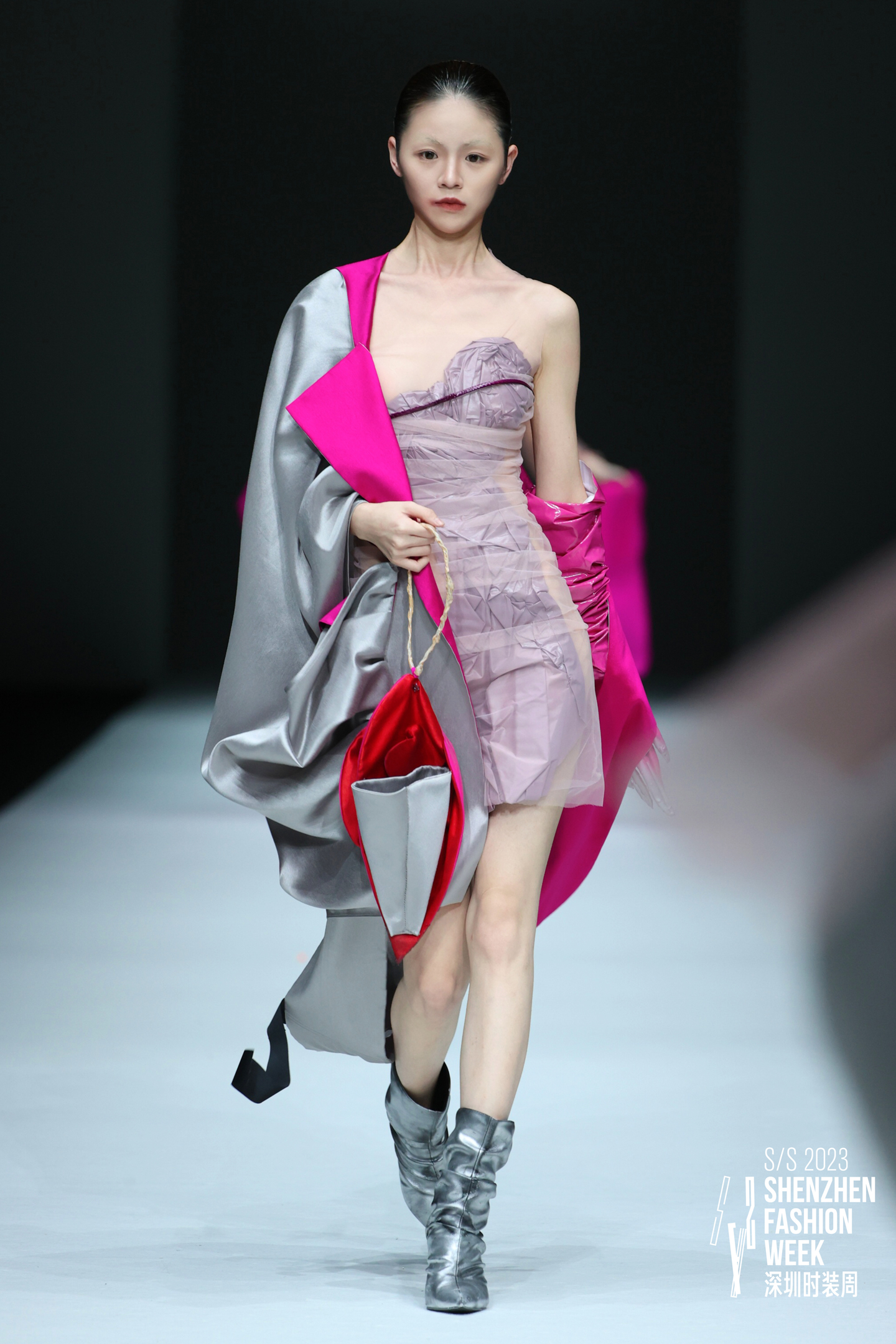 In Luo Wanqing, we found women’s empowerment in the form of The Marvelous Mrs Maisel, adding a pastiche of Mad Men’s pinstriped suit but keeping her ballet dream alive with custom-made prints, notable on the looks, bags and charms. 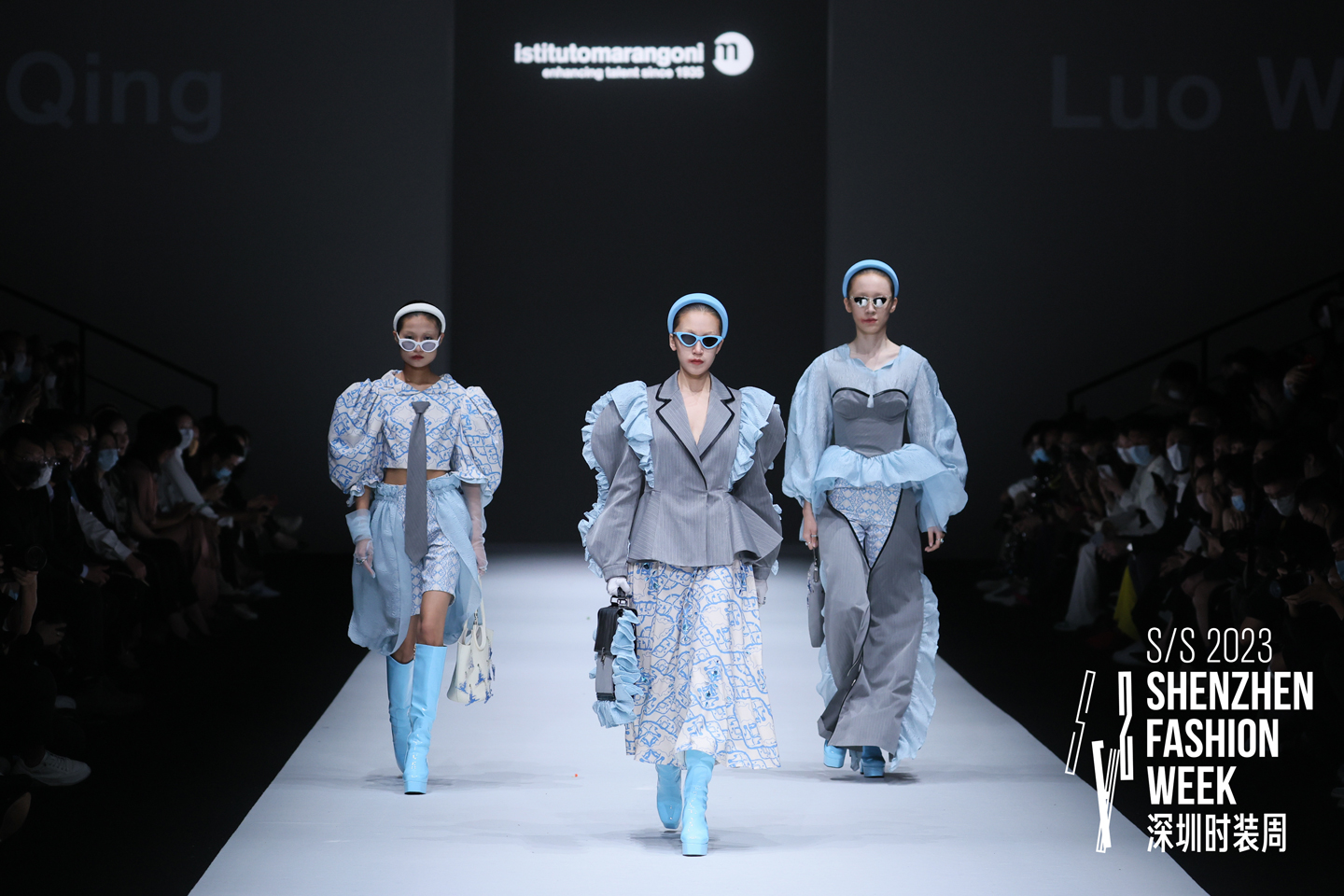 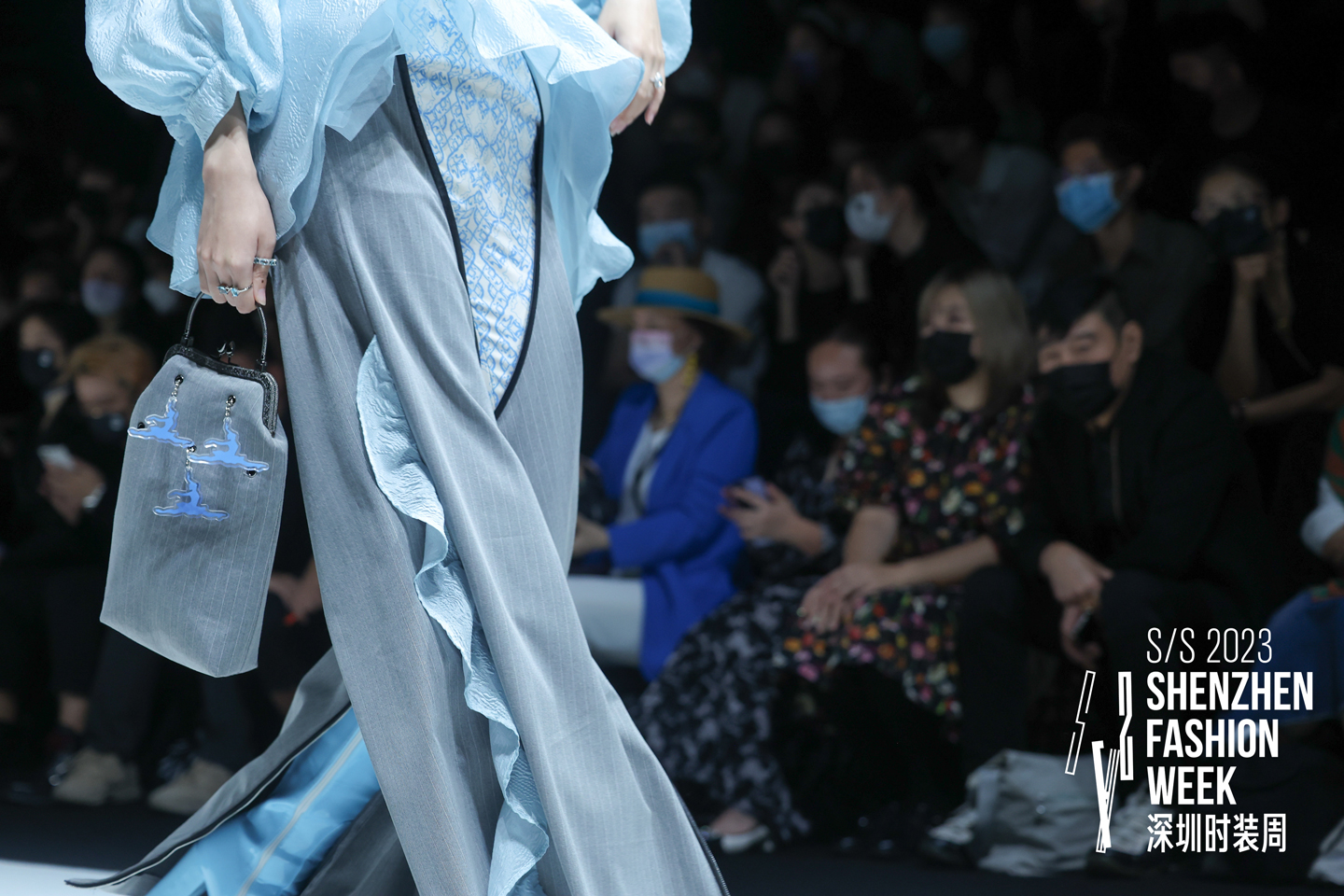 …They leave their houses…

Opening designer and Best Collection Design of the Year winner Yao Wenya drew inspiration from the ancient murals of the Nine-Colored deer in Dunhuang, Mogao Cave 257. Educated by her family tailoring heritage, with outstanding pattern cutting and draping skills, she shaped a sophisticated aesthetic purified by a Wabi-Sabi approach, visible in the unfinished, raw edges and custom-made cotton ramage lace, reassembled on a few looks. 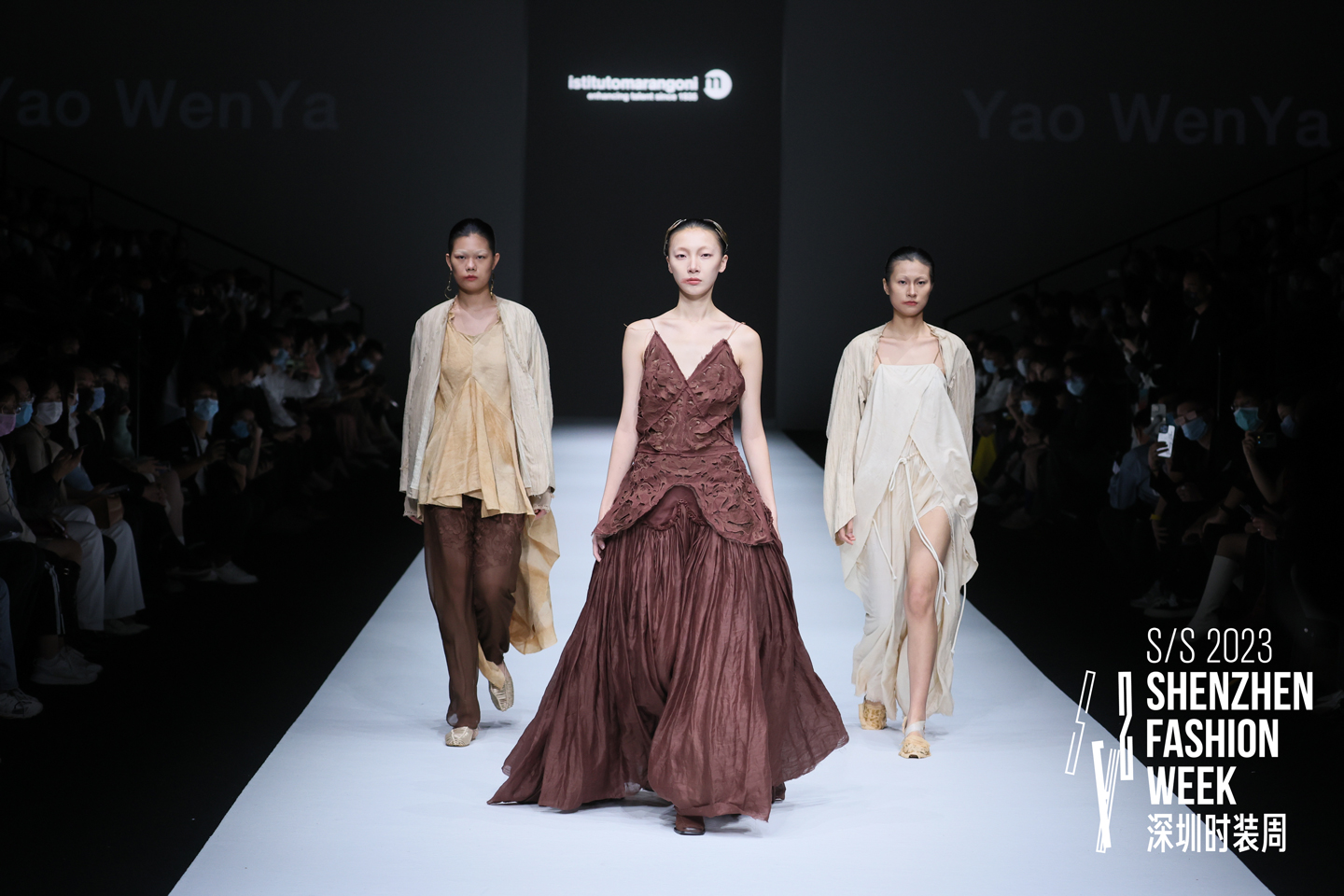 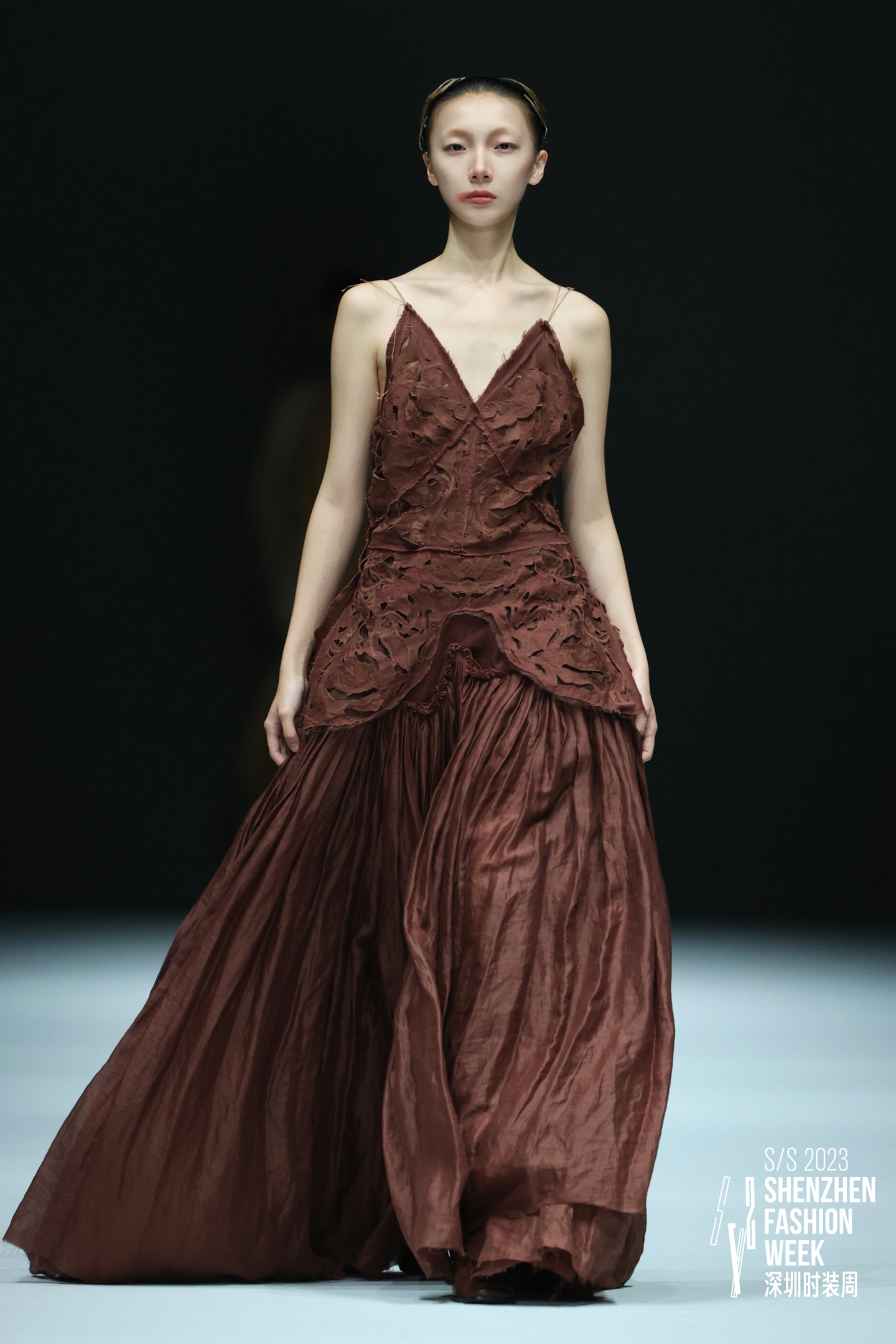 Li Enqi’s finale collection was the key to the whole show: the anxiety and depression of the sleeping disorder affliction. The asymmetry and deconstruction in her looks reflect the fragility of the mental status of a restless mind. Moreover, her garments can be disassembled and reorganised, presenting a different way of wearing them, all wonderfully hand-coloured in night sky tones on silk organza. 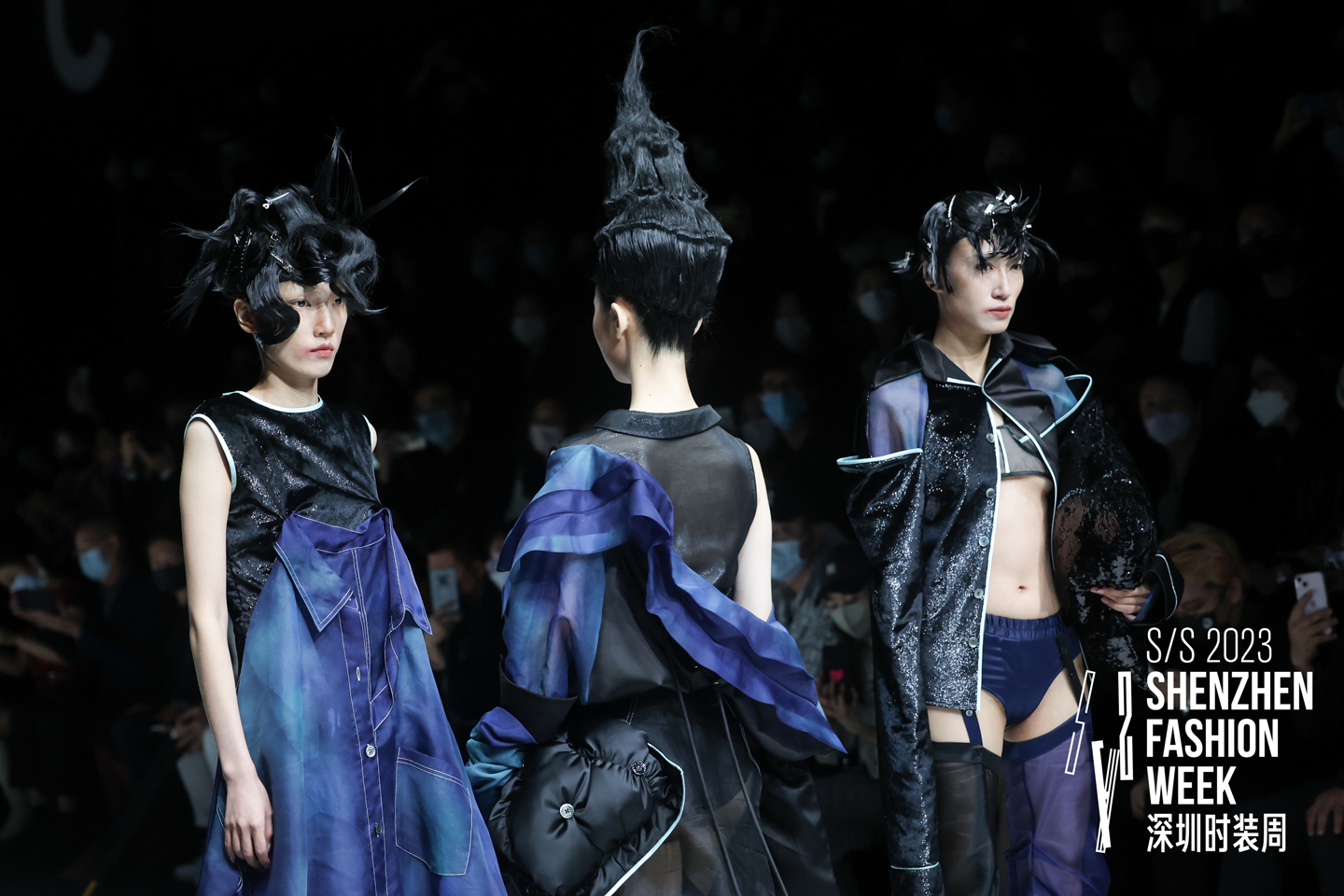 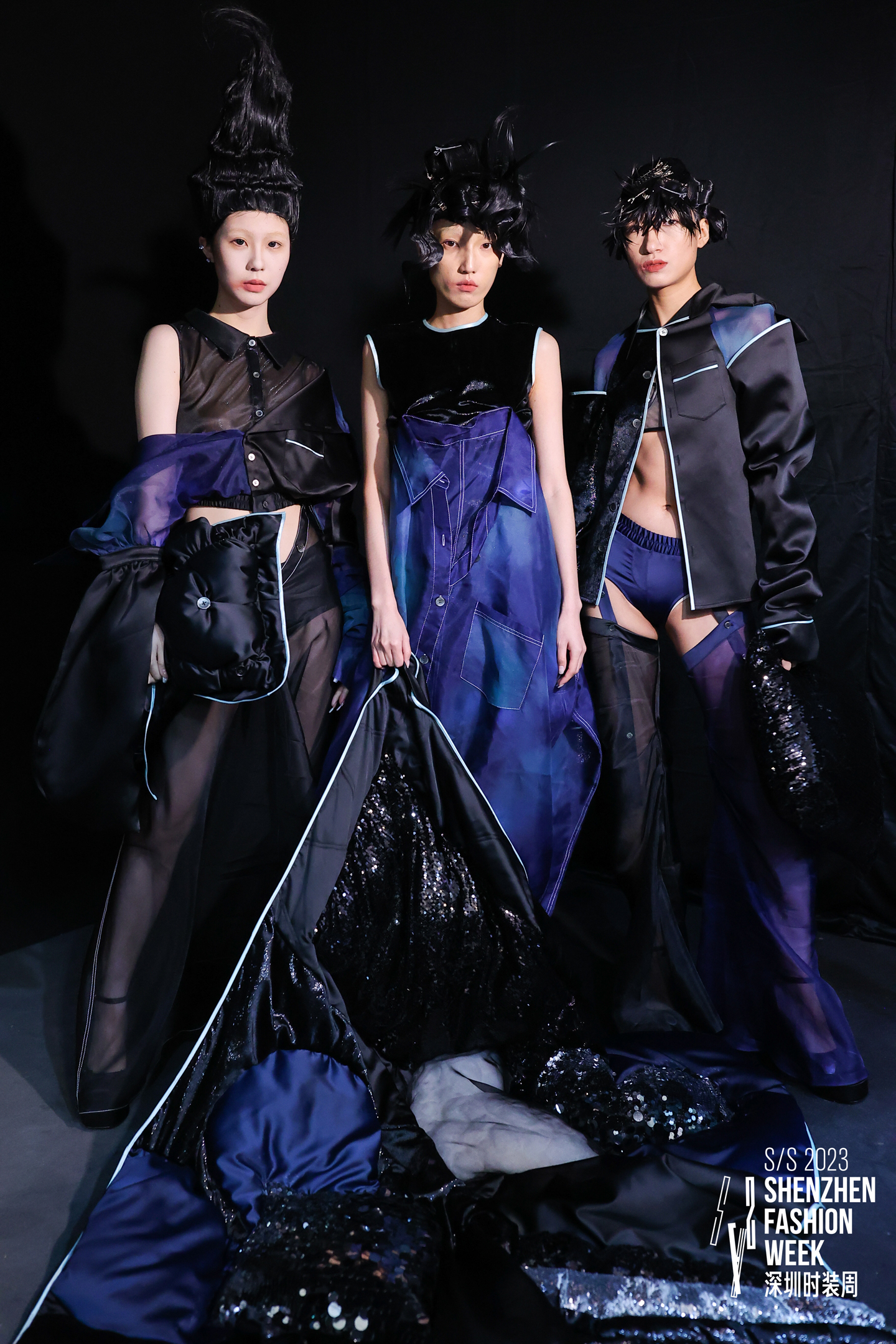 …Just for a short while…

The show went with a soundtrack that connected with each look as a circular unified song. You might have recognised the famous lyrics from a hit, It’s a Fine Day, subtly disclosing the feelings of the designers and probably most of the nation by reflecting on living conditions during the pandemic. Therefore, the two initial bangs were echoed in the final hectic schizophrenic rhythm, where the sleepwalking models in pyjamas appeared crowed by strained surrealist custom-made wigs, as the climax of unrequited love, for you, for me and everyone else.

La-la-la-la-la, dee-da-da-dee
It’s going to be a fine day tomorrow.

Other outstanding fashion shows dedicated to talents from Istituto Marangoni’s campuses worldwide include the Turn Up show in Milan and the Reinventing the Future défilé starring alumnus Rahul Mishra, as part of the celebrations for Istituto Marangoni Dubai’s opening.