With the latest London off-schedule shows by Roksanda, Alexander McQueen and Raf Simons, another remarkable (and potentially never-ending) marathon of womenswear runway shows came to an end. As members of the industry, we are now looking no longer at the big four that grabbed the headlines in the last month but at new, faraway and exotic destinations – “Forever Valentino,” the most comprehensive exhibition to date paying tribute to the Maison’s founder Valentino Garavani and the brand’s haute couture legacy, just opened at M7, the design and innovation hub in Msheireb Downtown Doha.

So, there will never be a better time than now to sit down and take a deep dive into the best things that went down at the spring-summer 2023 fashion weeks, from New York and London to Paris via Milan.

After two years without a full, in-person slate of shows due to our devasting confrontation with Covid-19, the spring-summer 2023 catwalks ignited a sense of normality – to say that the industry is back in a big way.

In a nutshell, the next hot season’s fashion is set to draw connections with feelings, nature, nostalgia, and so much more. Technology and innovation have been key players in defining that season’s dynamics. The appearances of Cher at Balmain and Paris Hilton at Versace, Bella Hadid’s spray-on dress at Coperni and the dance spectacle at Issey Miyake kept the viewers on the edge of their seats. And a lot of excitement-provoking events were the trademark of those weeks.

At Balenciaga, a set of 275 cubic metres of black mud was about “digging for the truth and being down-to-earth.”

Balenciaga led the series of discussions. Under the creative direction of Balenciaga’s Demna, that collection was definitely a head-turner with the set, the music, the props and everything but the clothes that can fuel the buzz around a fashion show. With models walking in lengths of sludgy mud, their hemlines covered in dirt and carrying what appeared to be tattered teddy bears, the obvious direction the presentation indicated towards was a military/war-like situation. A solemn, mysterious, and somewhat resentful tone lurked around the room. Oversized spiral scarfs, bleached brows and displeased facial expressions were other notable features of that show. 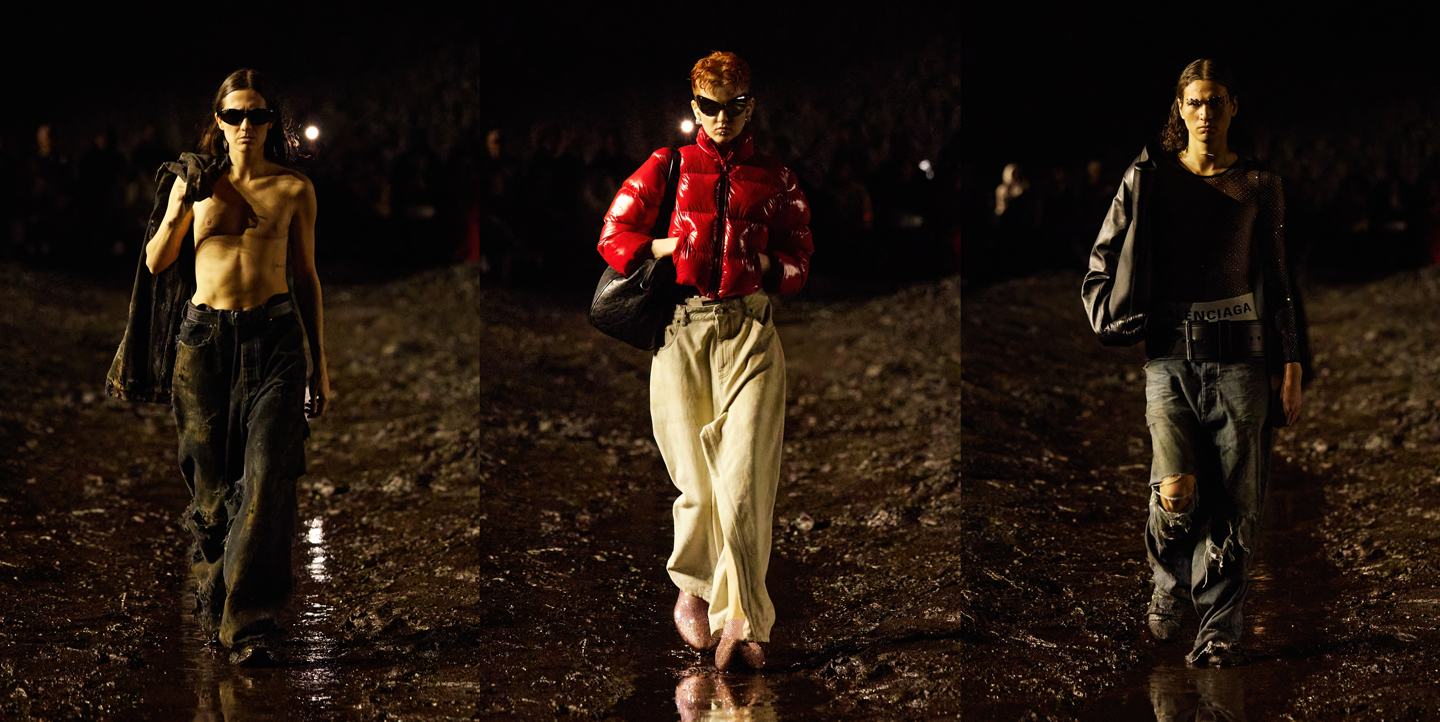 At AVAVAV, creative director Beate Karlsson brought a new perspective to the catwalk, quite literally. Models were asked to trip and fall, a bizarre idea of pretending to be rich and the inevitable backlash you get when reality hits you. If not, the drill was probably just a way to have fun and enjoy the cheer that followed. Oversized hoodies, knee-high fur yeti boots, padded shoulders and baseball caps were other standout features of the show. 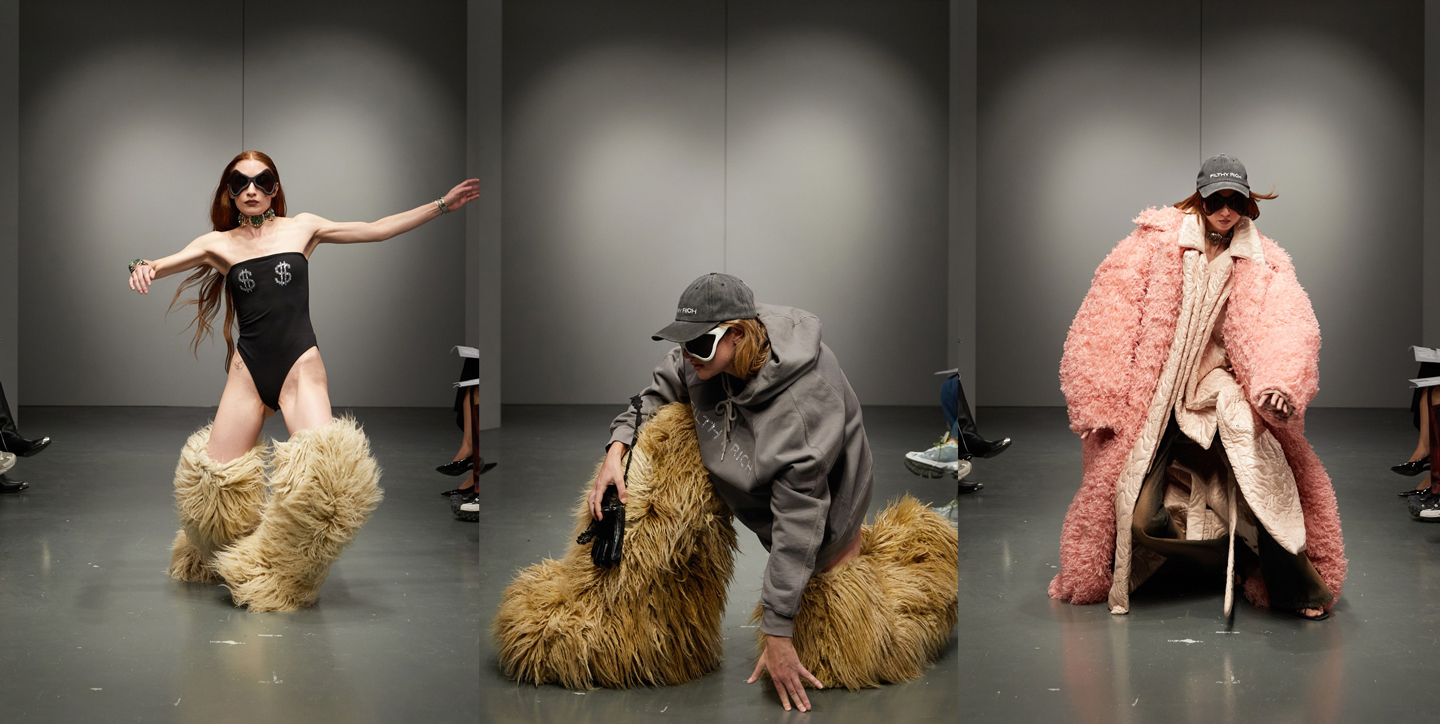 What about Thome Browne’s latest agglomeration of ideas? “As you know, Thom likes to tell a story,” actress Gwendoline Christie mused as she opened the American designer’s spring-summer 2023 show in the ornate Opéra Garnier. The catwalk narrative unfolded through an imaginary set and plot, with Cinderella’s glass slipper in the foreground. Polka dots, exposed lingerie, pastel colours and big flowing silhouettes were the collection’s main features. A fairy tale theme of extravagance and eccentric styles well defined the nature of that show. 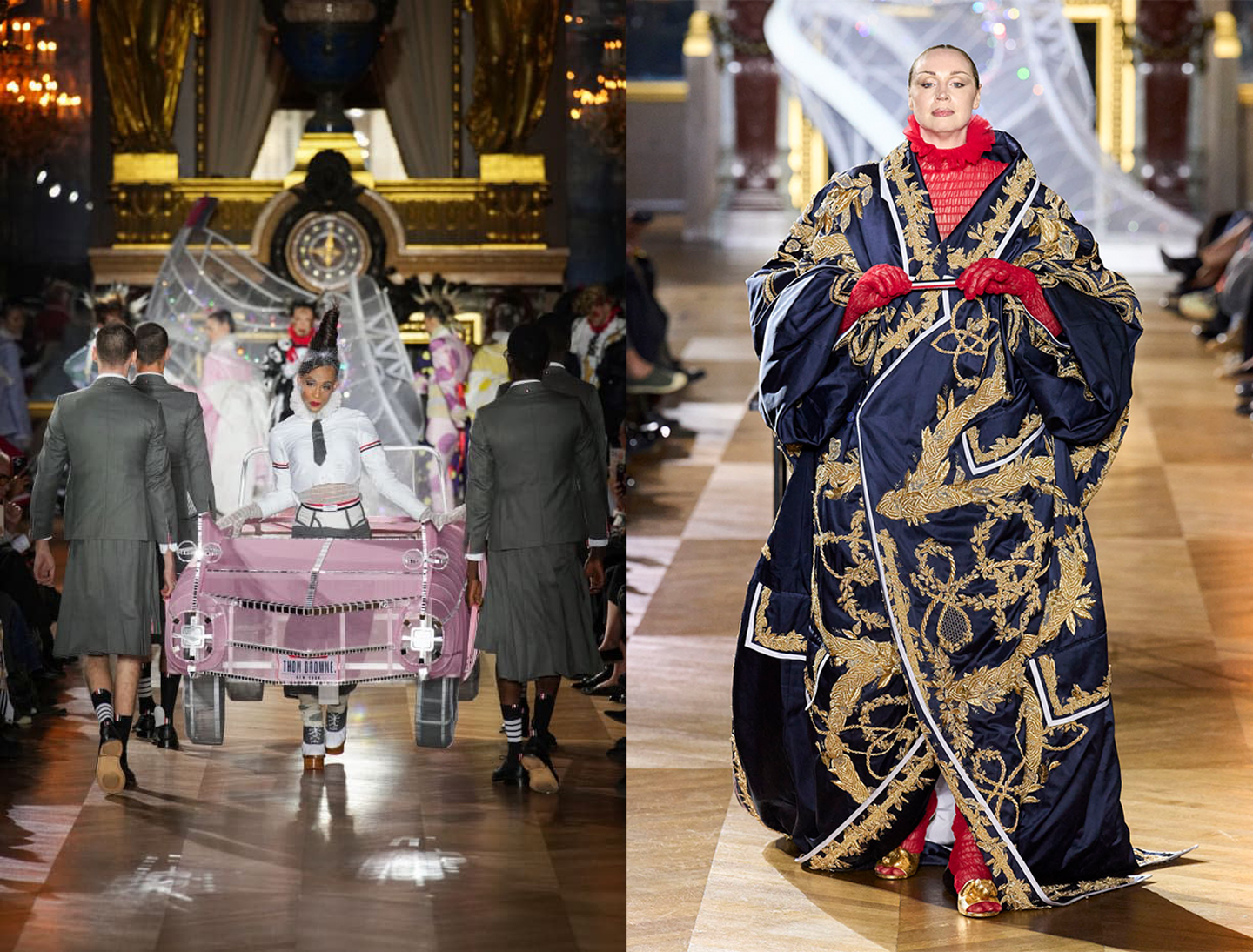 Moving on to Gucci Twinsburg, the brand found 68 sets of identical twins to model the collection – a phenomenal statement-making idea. Gucci’s Alessandro Michele magnificently portrayed a unification of different identities, the solidarity of different cultures, and the power of togetherness and cooperation through that show. European tailoring, Middle Eastern jewellery and Chinese clothes all represented the concept of unity in diversity, and the collection was indeed a milestone in the Kering brand’s history. 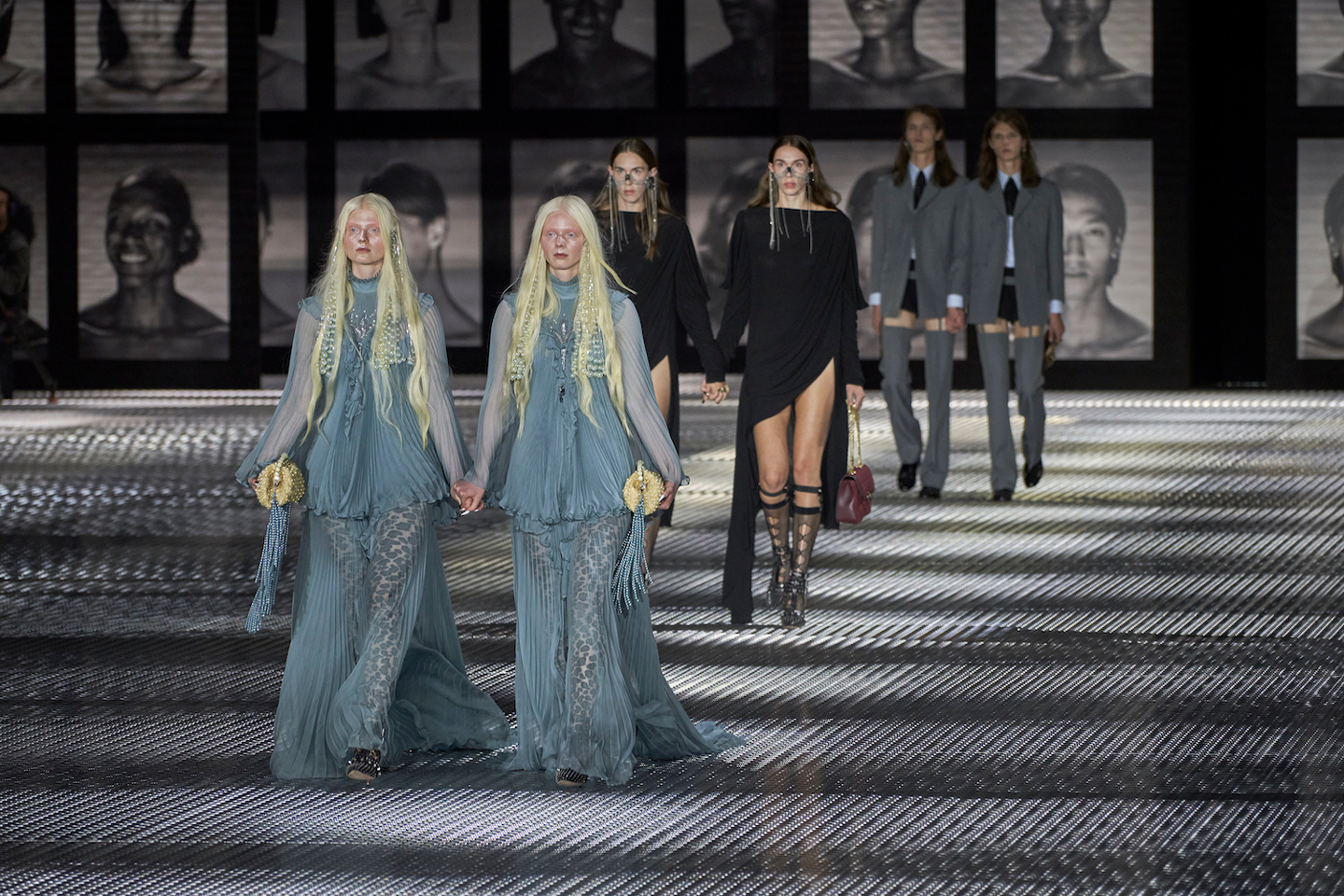 At Loewe, Jonathan Anderson sought to strike a balance between nature and technology through an anthurium: a product of nature that looks like an object of design

Another noteworthy performance for the season belonged to Loewe. Nature and the environment were the categories that were conceptualised and performed on the catwalk. For the Lvmh brand’s latest womenswear collection, creative director Jonathan Anderson’s idea revolved around the coexistence of nature and technology: flower-shaped dresses, pumps made of deflated balloons packed so densely that from a distance, they read as ruffles, natural faces with sleek buns, anda pixelated glitch in a Minecraft-looking hoodie were some of the components. 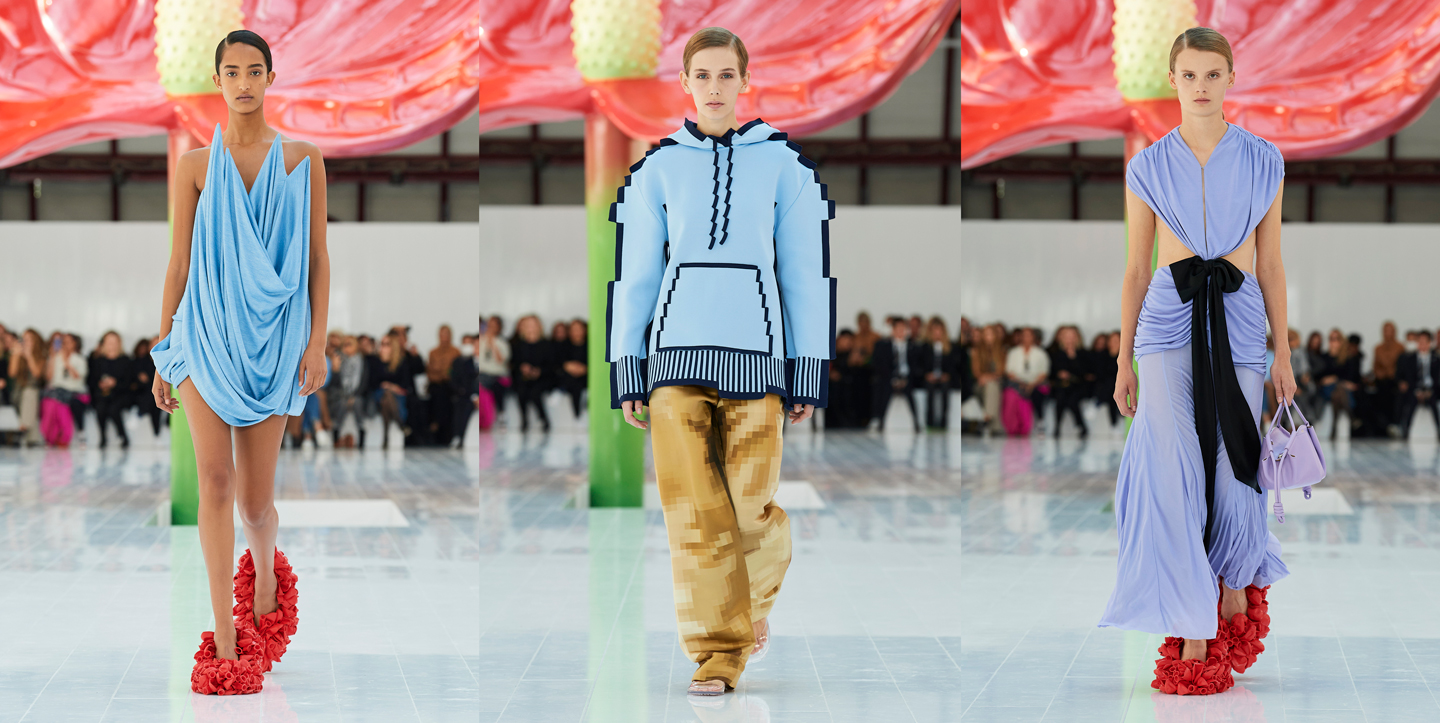 “We wanted to bring water to the catwalk,” said Lisi Herrebrugh and Rushemy Botter, who accessorised the looks with extra-large condoms filled with blue liquid as bubbly gloves

At Botter, water is a thing. Alarmed by the issue of the oceans drowning in millions of tons of plastic, the aquatic wear brand, helmed by Lisi Herrebrugh and Rushemy Botter, went for a range of jumpsuits, scuba-like vests, aquatic print dresses and aqua-blue suits – all symbolising segments of the ocean. 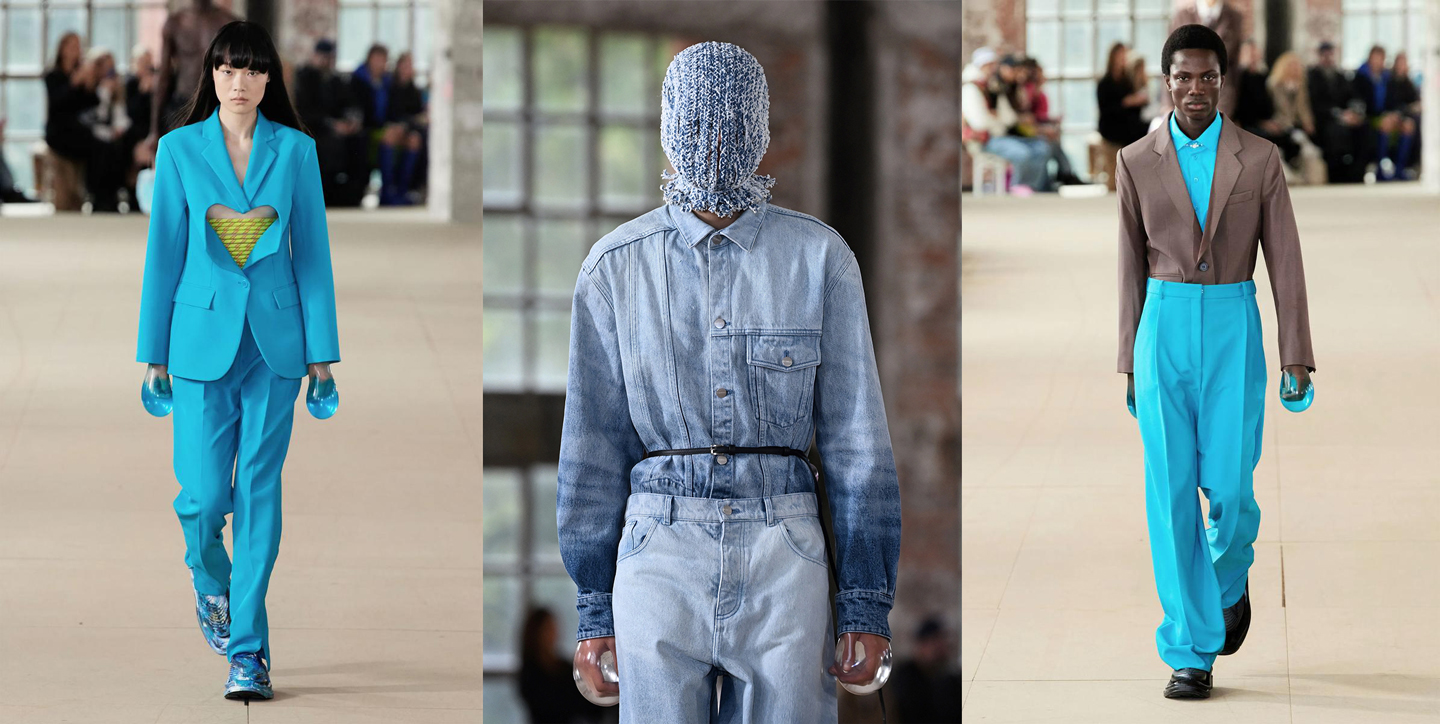 All in all, the last fashion month has been multifaceted regarding both the garments on the catwalks and the reactions elicited. The collections evoked a broad spectrum of feelings - fun but solemn, thoughtful but easy, extravagant but simple. It is incontrovertible to realise that technology and the need for a sustainable environment are the building blocks for the future of fashion: a well-designed system harnessing the right resources with the right technology is the need of the hour.