How to navigate a fashion museum

“This is what a museum is for: to see. To have your own personal encounter” –Bonnie Greer 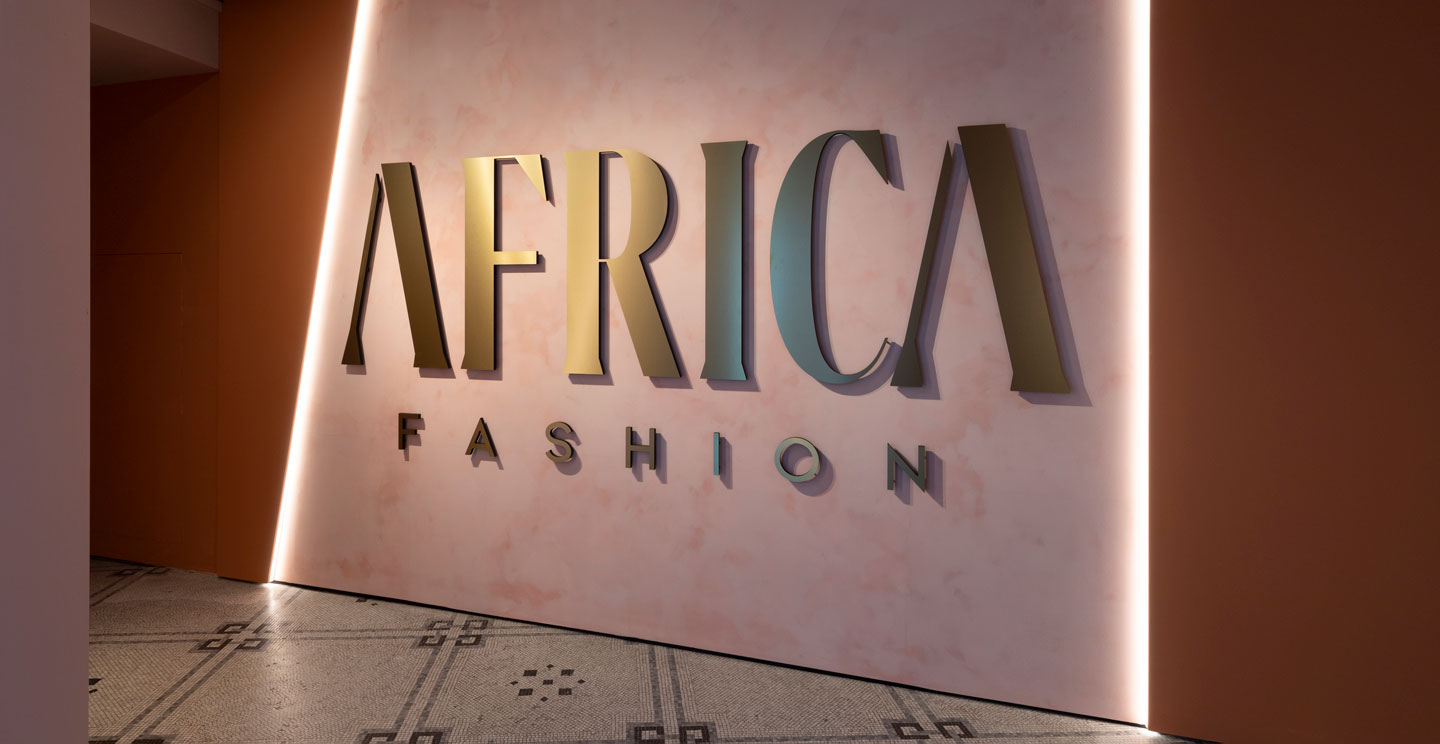 The V&A Africa Fashion exhibition catalogue opens with an introductory poem by Bonnie Greer, playwriter, novelist and first woman of colour as Deputy Chair at the British Museum. She got the point framed in this article: visiting a fashion exhibition is an authentic and valuable experience for fashion students. Not only will visitors get a substantial dose of inspiration, but the quality of the content curated by industry experts could be an authentic reference for fashion students. But how do you navigate a museum exhibition and get the most out of it for fashion research?

This article will summarise the exhibition concepts, provide ideas on how to interpret the display and enhance the research experience with further readings on Africa and its fashion.

Before getting to the heart of the article, it is worth remembering that the V&A is the leading museum for art and design in London, with an outstanding, internationally acclaimed collection. The best way to engage with the V&A fashion collection is by the temporary exhibitions that are cutting edge in the sector. 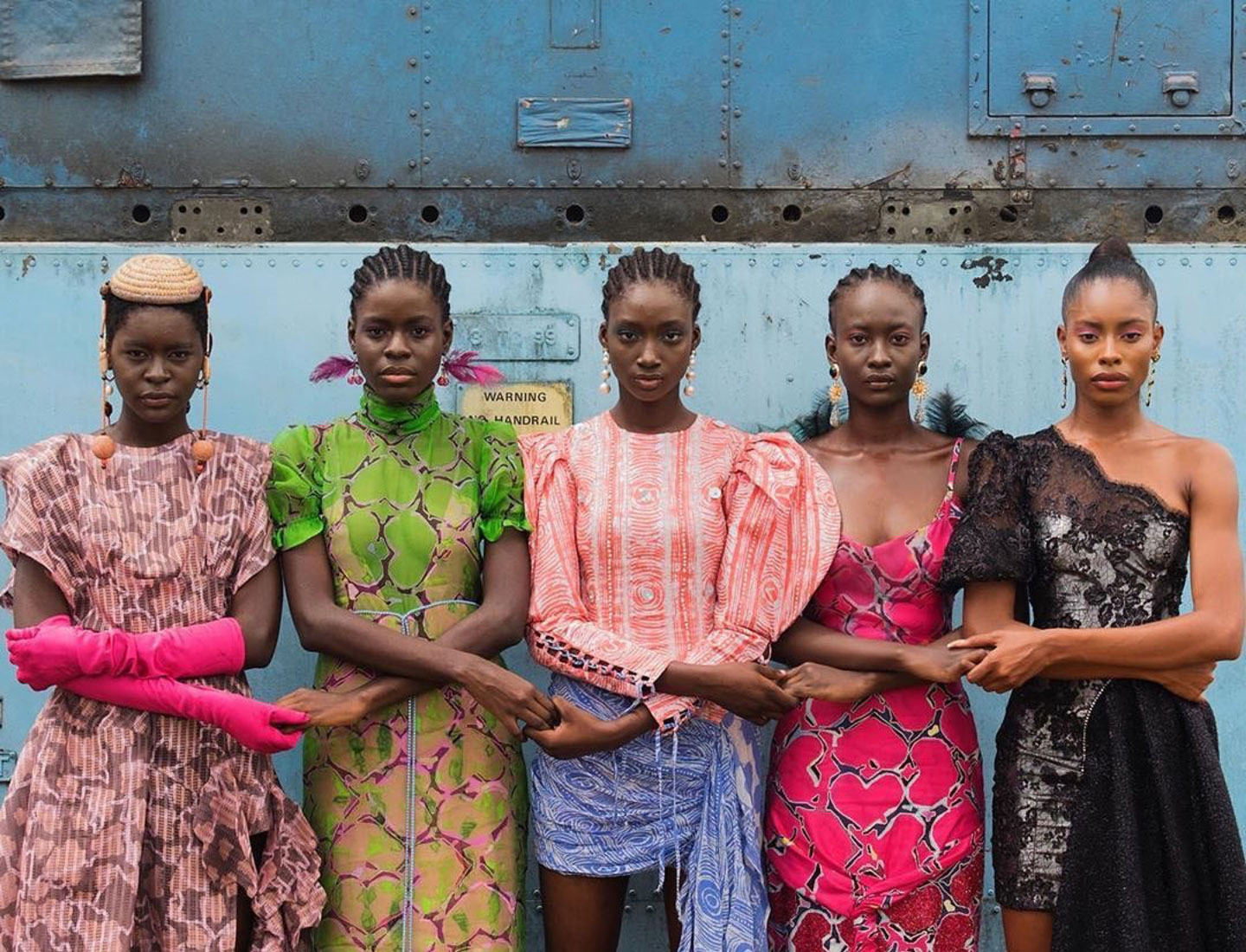 Organised over two floors, the curatorial design of the Africa Fashion exhibition guides visitors through the individual voices and perspectives of African fashion as a “self-defining art form that reveals the richness and diversity of African histories and cultures,” as appointed in the exhibition catalogue. The exhibition’s aim is clear, as stated again by Bonnie Greer in her introduction poetry: “Africa fashion is not new. It has never been ‘discovered’.”

Walking in this exhibition, we are introduced to the African context in which fashion reveals itself through time. It prepares visitors on what to expect from the display of contemporary African fashion creatives that are shifting the global fashion geography.

Exploring a variety of contents, the exhibition shares just a glimpse of the vitality of the African scene with its glamour and political influences, which is “always changing, always resisting definition.”

The first garment that welcomes us into the exhibition is a shimmering pink silk and raffia garment from the Cameroon fashion designer Imane Ayissi (2019), immediately showing the open path of creativity into and beyond African fashion. 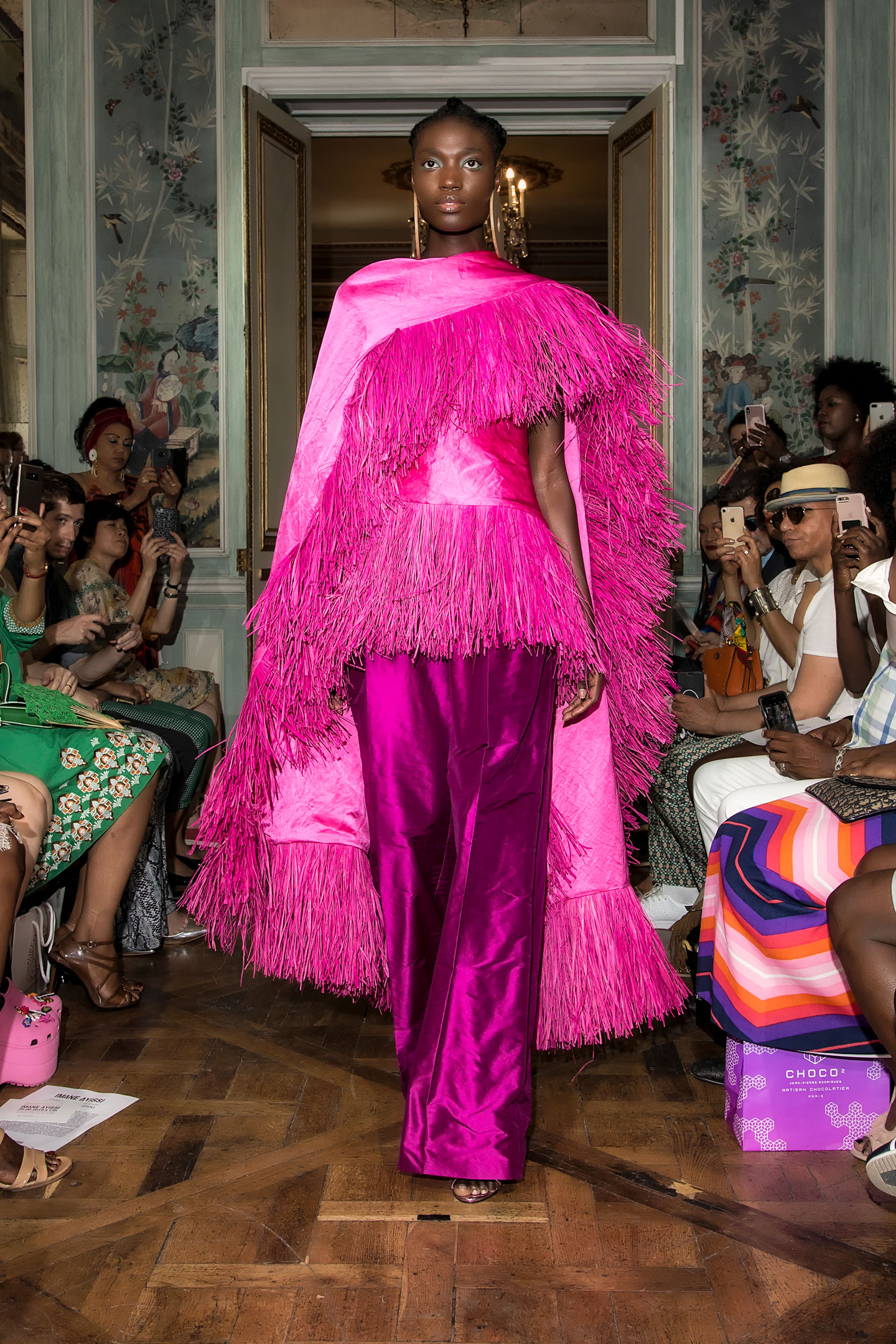 The V&A Senior Curator of Africa and Diaspora Christine Checinska enhanced that Ayssi collections “choreograph a metaphorical dance between Africa, Asia and Europe through his choice of fabric […] It is aesthetics and sense of style that challenges understanding of what Fashion Africa is and can be.” As Ayssi asserted, fashion is an opportunity to change the world’s vision of African fashion – “creativity has no borders”. More of Ayssi’s designer garments are on display with a strong impact on sustainable materials and handmade crafts.

As the curator admitted, showcasing all fashions across such a vast region would be to attempt the impossible. So, the exhibition proposes a selection of creative fashion designers from the 20th century to today’s eclectic and cosmopolitan African scene. 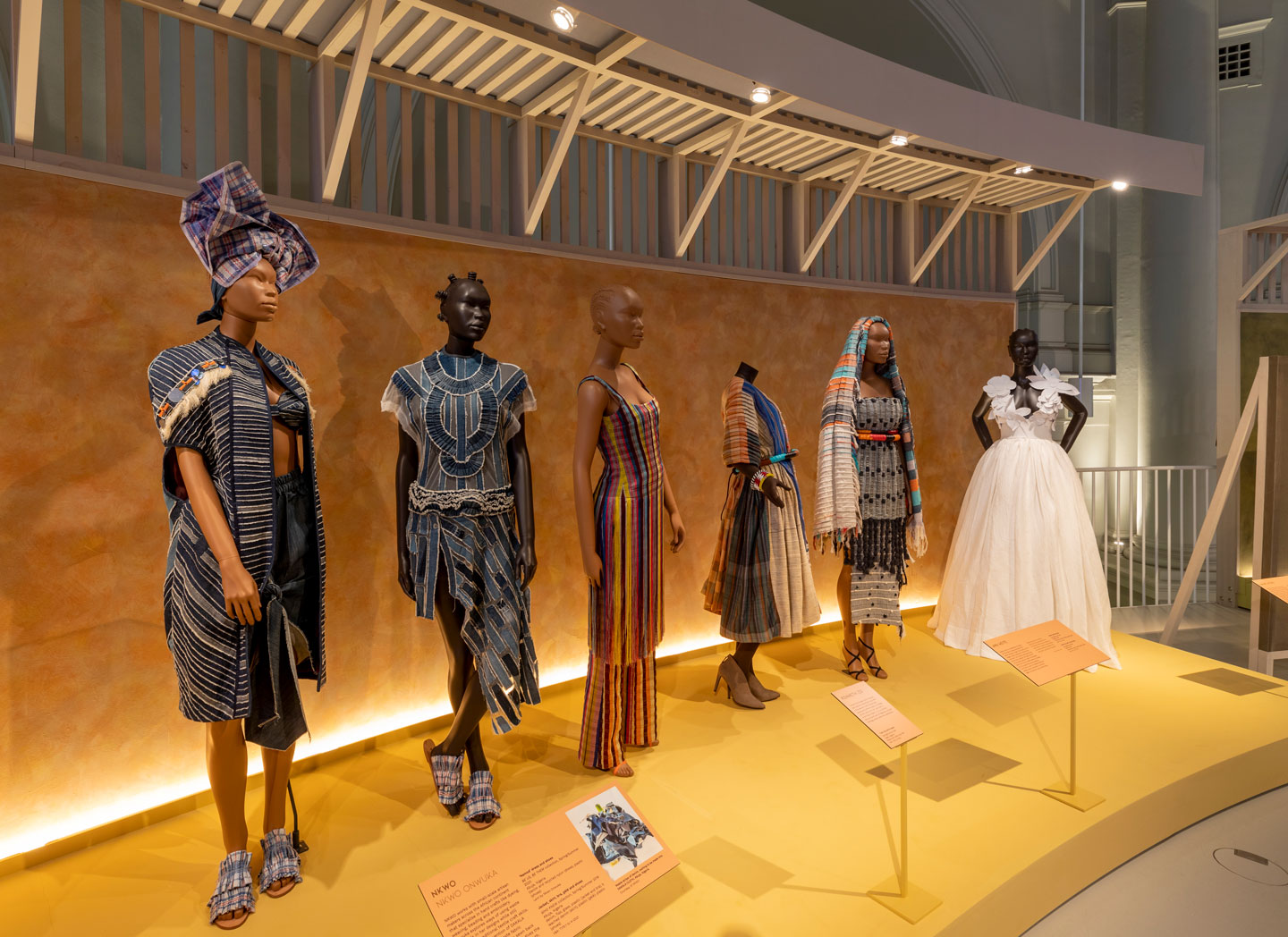 The “Africa” the exhibition refers to has multiple histories and cultures shaped by a new pan-Africanism – an inclusion of continental differences and complexities. Its cosmopolitan roots go back thousands of years, with travellers, European traders and cross-cultural exchanges that shaped the continent’s aesthetics in all directions.

Wearing as a political act

In the opening section, we are guided in the storytelling of the African independence and the liberation years from the 1950s to the 1990s, starting with Ghana, which in 1957 became the first West African to be free from British colonisation. 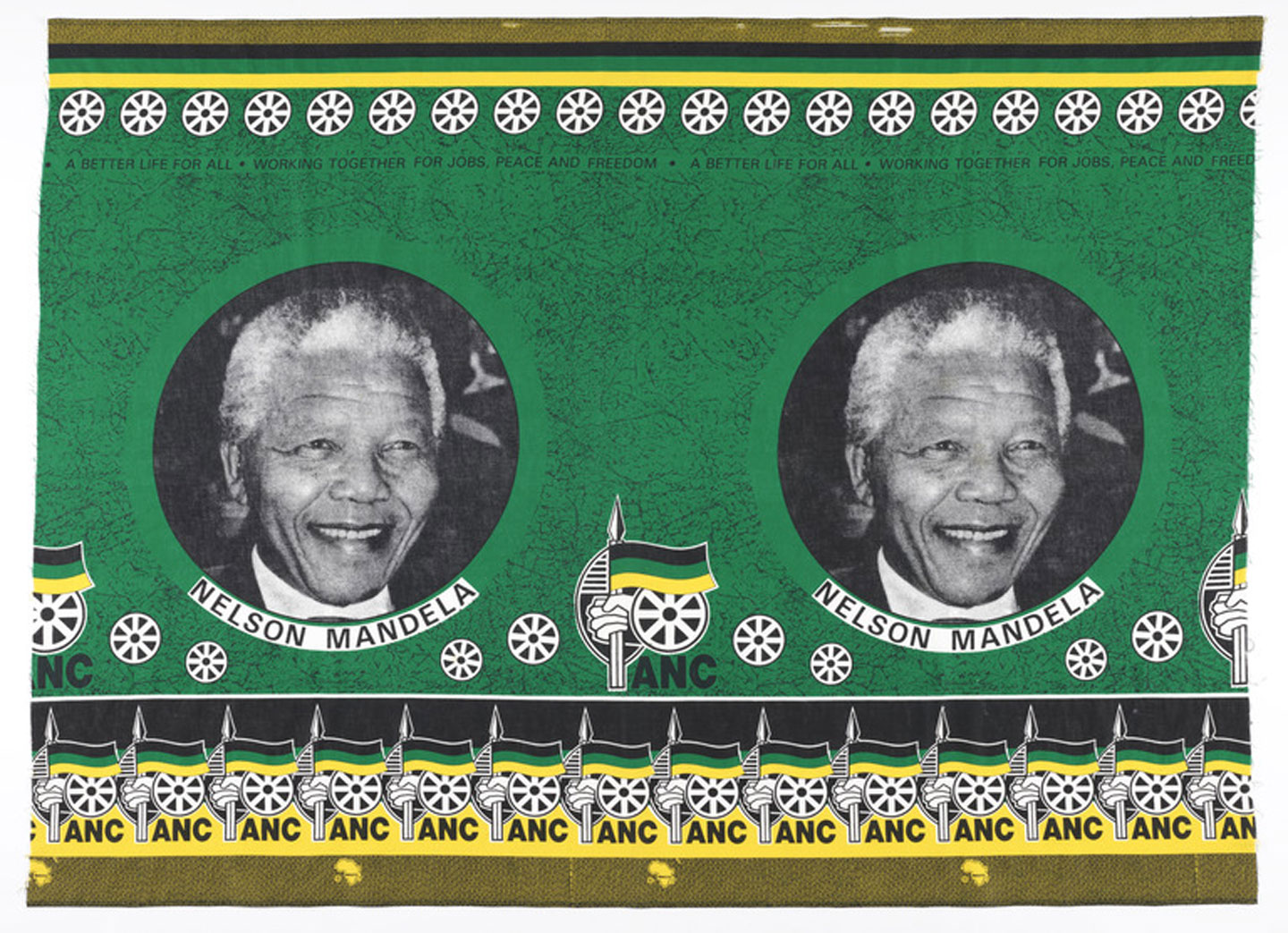 Quoting the curator Christine Checinska, “colonisation generated certain modes of thinking […] and set in motion hierarchies of value that unlimited fixed African creativity outside modernity,” also defying the social importance of fashion: “Fashioning the body is also a means through which one can challenge or reaffirm one’s position within the social order.” 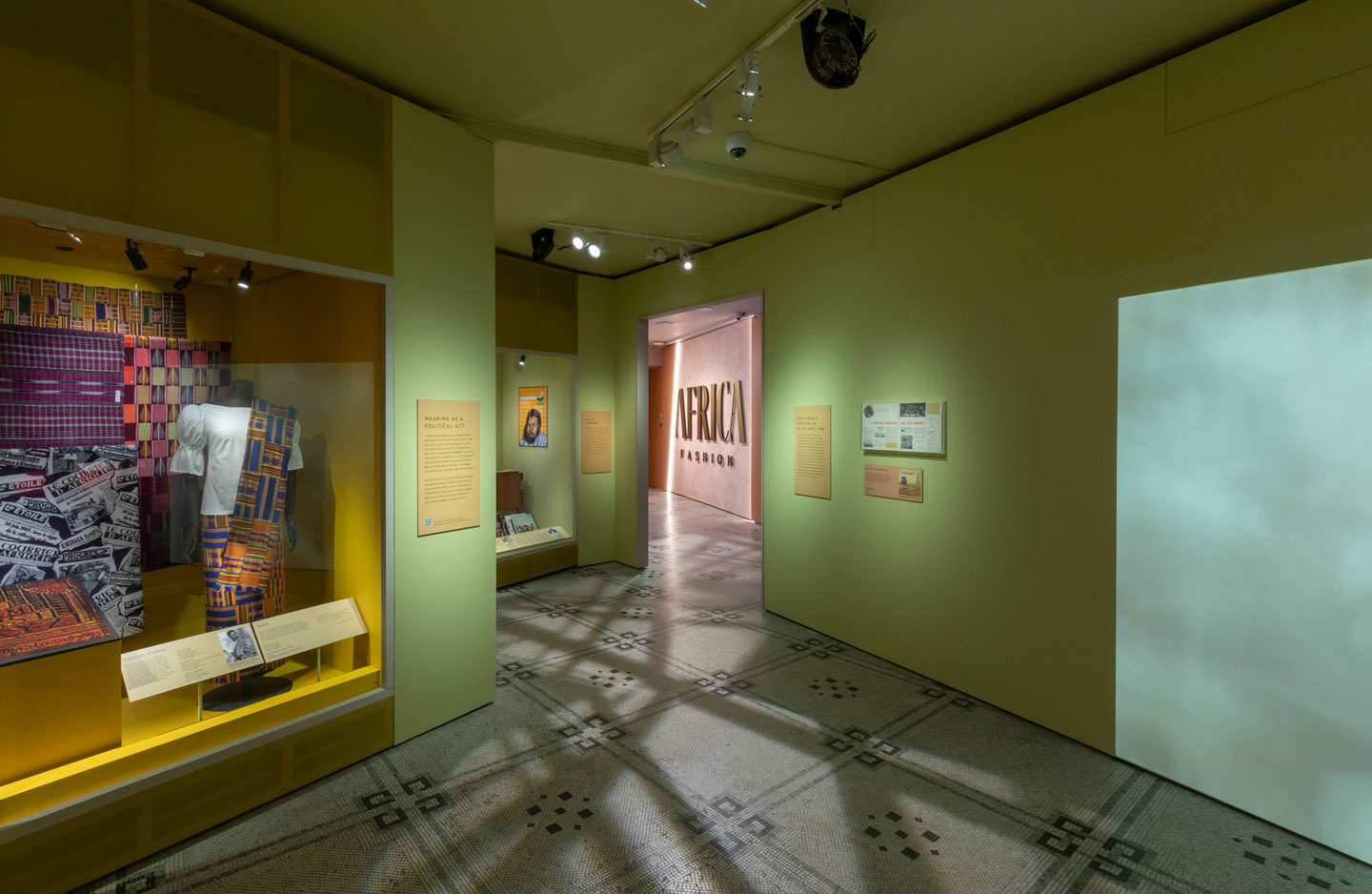 Through iconic photography, visuals and fashion garments redesigned to reflect the continent’s socio-political controversy, we are led to explore Africa’s cultural renaissance tales, collecting information we need to understand. On the second-floor display, the “revolution” of contemporary fashion.

All along the exhibition, a priority is given to all the nuances of what Blackness means in the political sense, “as to focus solely on pigmentation would simple reduced what Africa is”, Checinska stated. Admirable is the variety of skin tones and hairstyles of the mannequins on display.

Politics and poetics of cloth

“Cloth is to the African what monuments are to Westerners” - sculptor El Anatsui, echoing fellow artist Sonya Clark 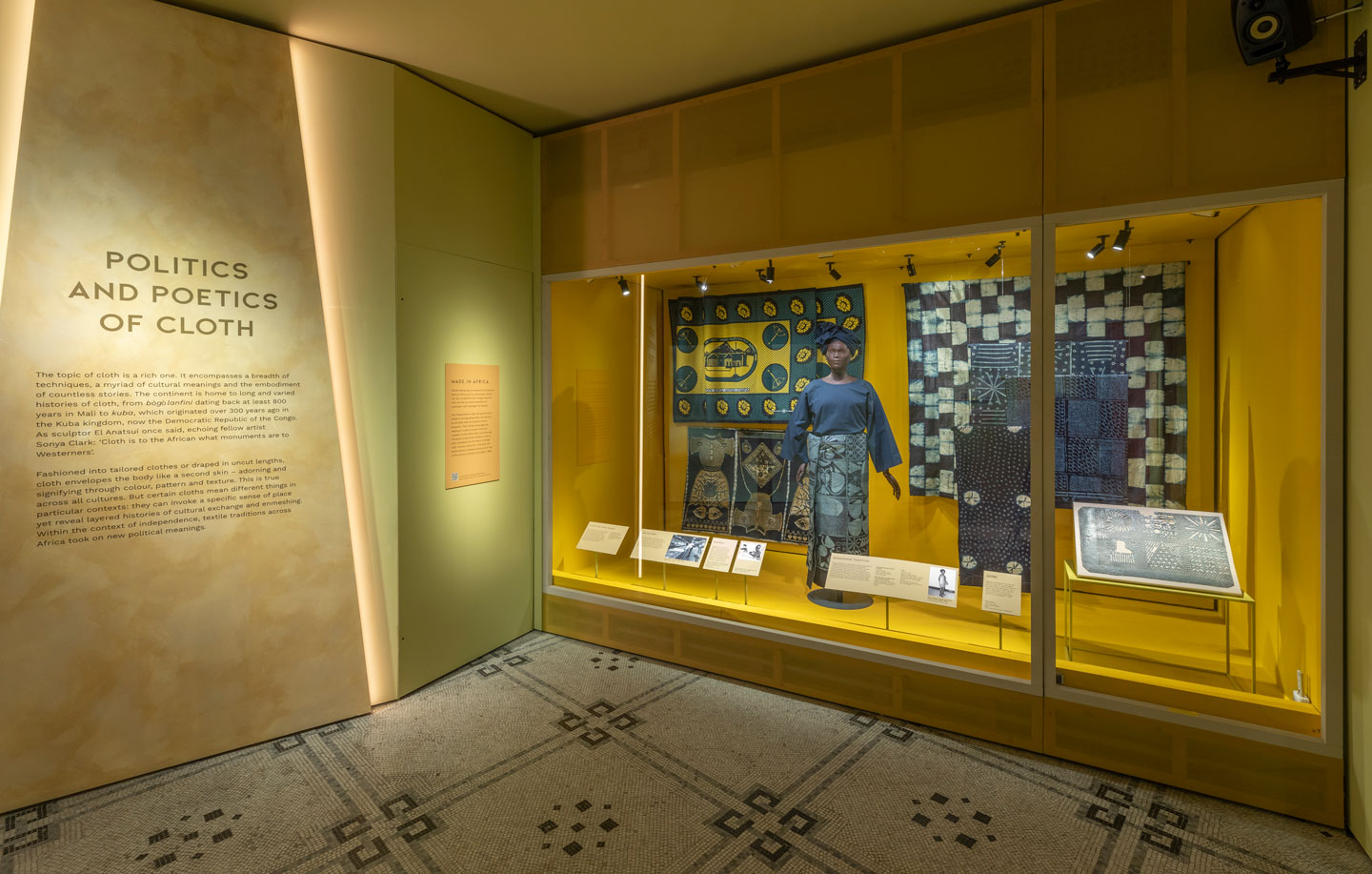 In this section, the exhibition focuses on a selection of five fragments of African textile-rich history. Any fashion designer needs to document and recognise some elements of traditional African fashion that have become the foundation and inspiration for contemporary design.

The displayed garments give visitors the necessary tools to recognise some recurring elements of African textiles: through the display, we learn to distinguish a coloured strip from Ghana, called Kente cloth, woven by Asante and Ewe people in West Africa, from the Tanzania garment Kanga, a rectangular shaped, printed cloth from East Africa. 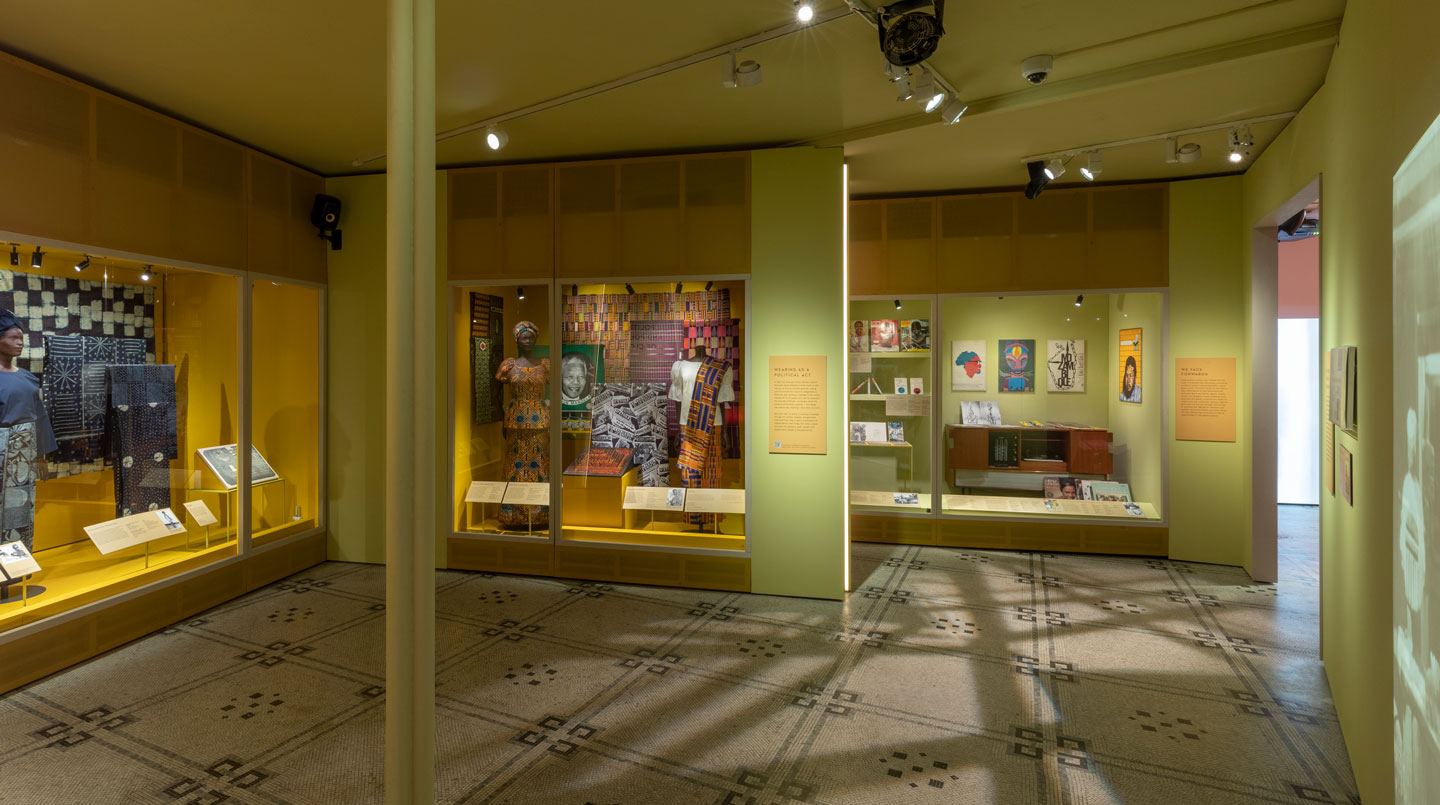 This “reimaging of the tradition” section on display states an important consideration: textiles do reflect not only the traditional methods of production but also the taste of African people and what was important at the time and is relevant today. As curator Christine Checinska said, textiles are non-verbal recordings of various aspects of African life and contemporary art fashions, in turn, are as eclectic and diverse as the African continent.

Then the exhibition presents the highlights of designers who made the history of African fashion during the 20th century and the impact of their travel experiences on the fashion scenario. 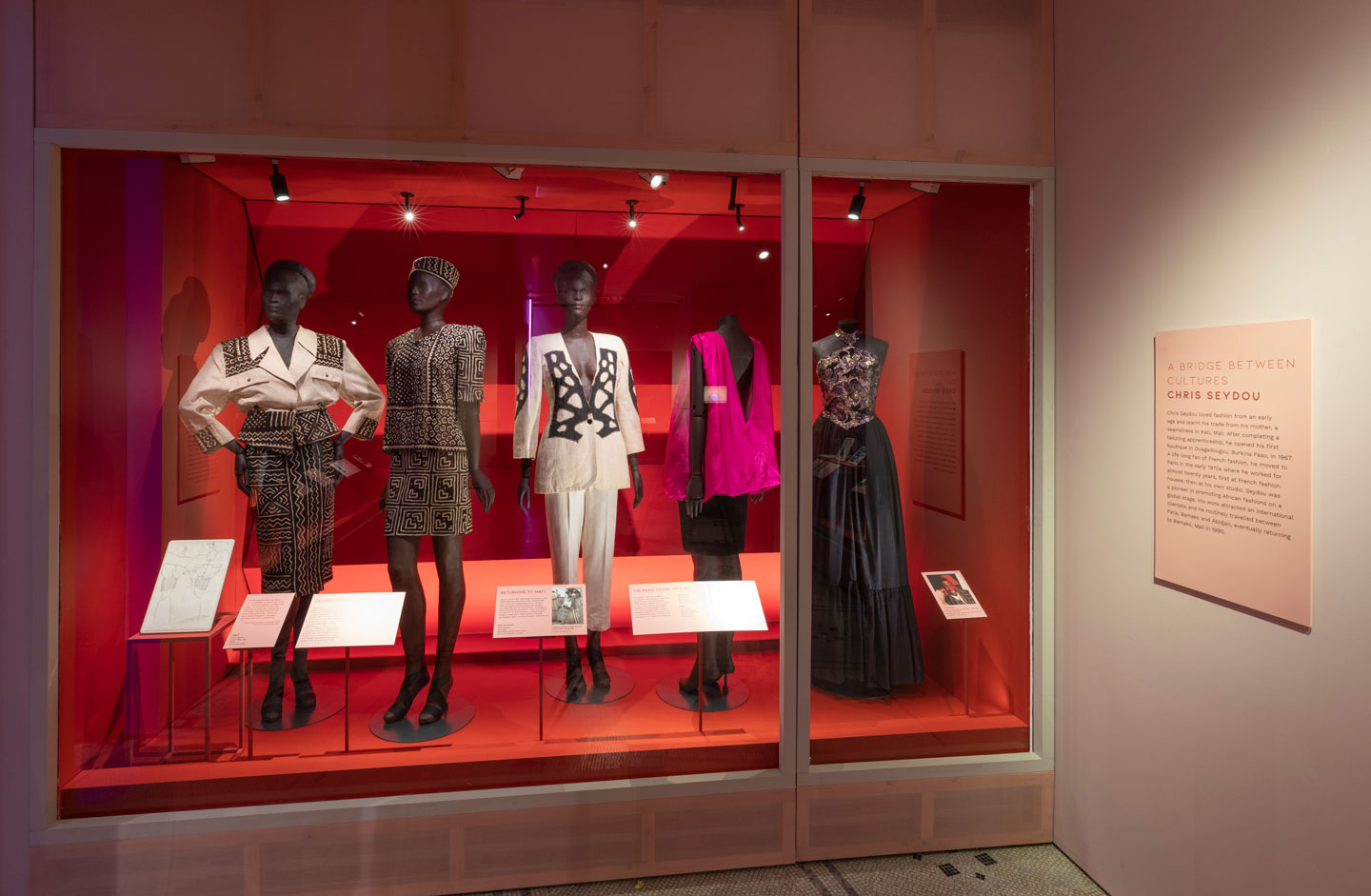 The post-independence scene was the perfect context for an emerging interest in textile design and production. Also, the crossing cultural experiences of travellers living abroad before returning home to help to rebuild their nations gave designers that fluidity of cultural identity “confounding one-dimensional definitions of African fashions.”

In the exposition area called A Bridge Between Cultures, we can clearly see the recovery and reinvention of tradition through dialogue with European fashion to create a new sartorial language.

About these designers, the curator stated that their travelling to Europe was not intended as a need for fashion appropriation but rather as a search for “Global North knowledge and cultural expressions” as a need for resources to develop the modern African fashion industry.

As an insight, here is what visitors can learn from a few influential African fashion designers. Kofi Ansha was the enfant terrible (1951-2014) who introduced Ghana to the international fashion world and aimed to bring the Kente cloth into the 20th century. On display is one of his iconic styles from the “Blue zone” collection (1996), launched in 1987 in London, where he was building his career. This look incorporates the traditional indigo-dyed Adire cloth with a denim jacquard fabric from a Japanese designer’s leftovers, turning it into a fashionable garment. Ansha’s legacy can be summed up in this sentence: “West is not always the best, and inspiration is all around you,” which is precisely the point of this exhibition. 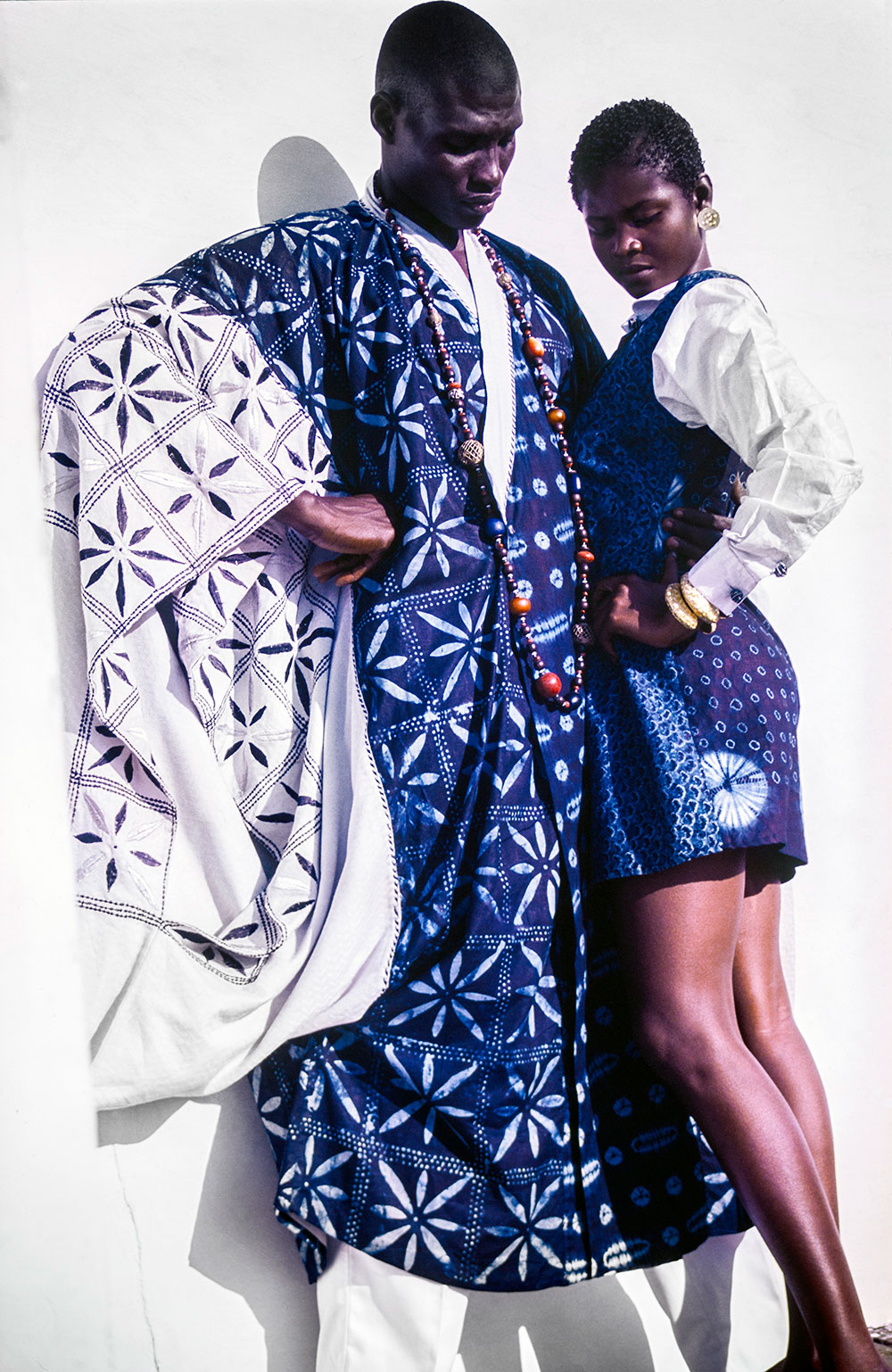 Another designer to discover in this exhibition is Alphadi (b. 1957), known as the magician of the desert. Born in Timbuktu, Mali (West Africa), Alphadi is a self-taught designer who grew up professionally in Paris. In a video interview, he talks about his inspiration from the desert land of Mali, which he integrated with layers of cross-cultural reference into an “extravagant collection.” Alphadi’s vision is for fashion to be a vehicle for unity and prosperity to achieve global peace. The humanitarian value of Alphadi’s inspiration was recognised by UNESCO when he was named “Artist for Peace” in 2016 for the LE FIMA (Le Festival International de la Mode en Afrique) cultural project he launched in 1998. 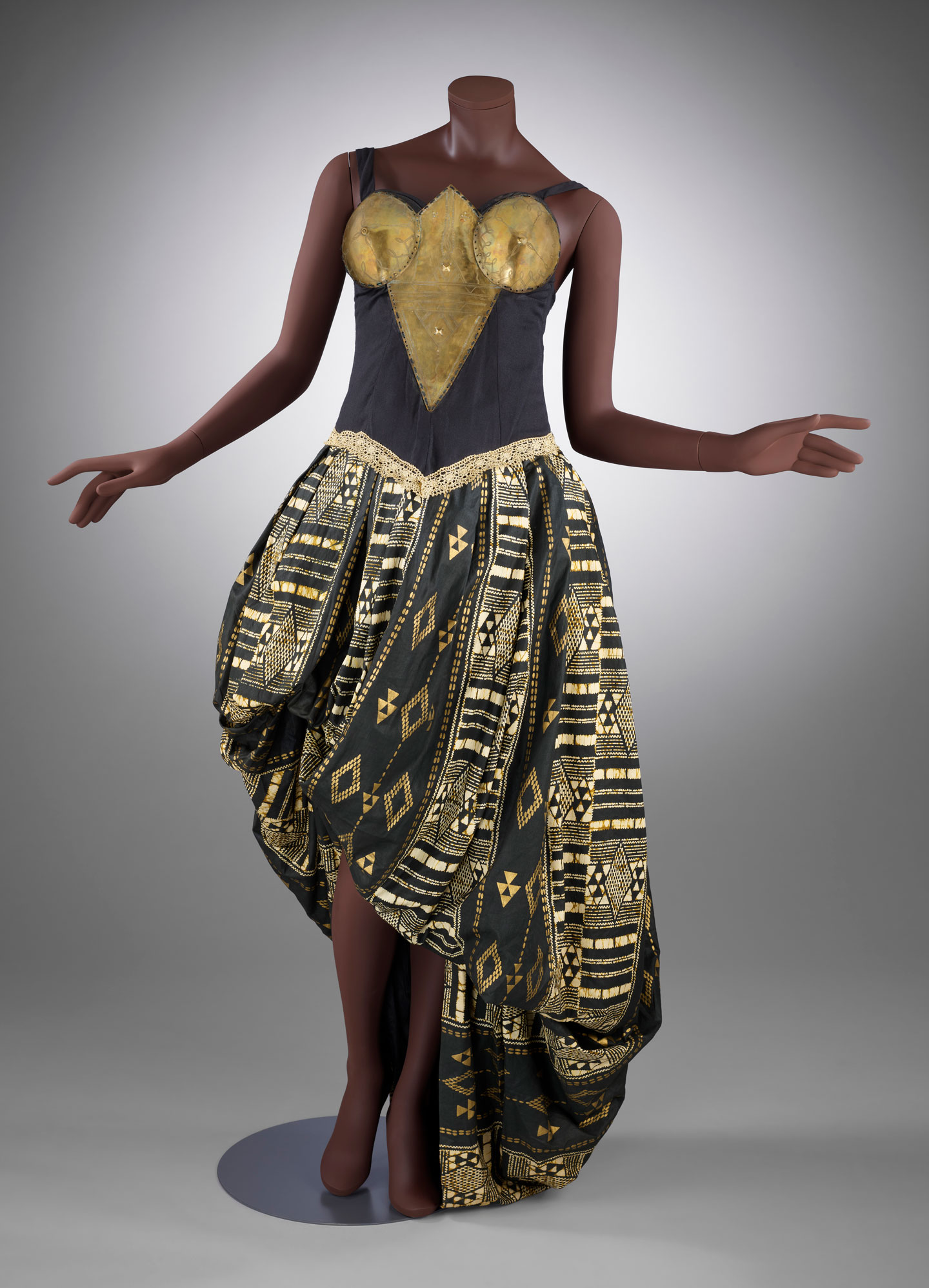 Together with Shade Thomas-Fahm (b. 1933), Chris Seydou (1949-1994) and Naïma Bennis (1940-2008), they represent the first generation of African designers whose works are exhibited in a London museum for the first time.

To conclude this informative part, a series of photographic portraits from the second half of the 20th century captures life in African countries after independence. Technological innovation invited creatives to experiment more in line with the taste of contemporary youth generations for the freedom of expression they had conquered, to make their different cosmopolitan identities finally visible. 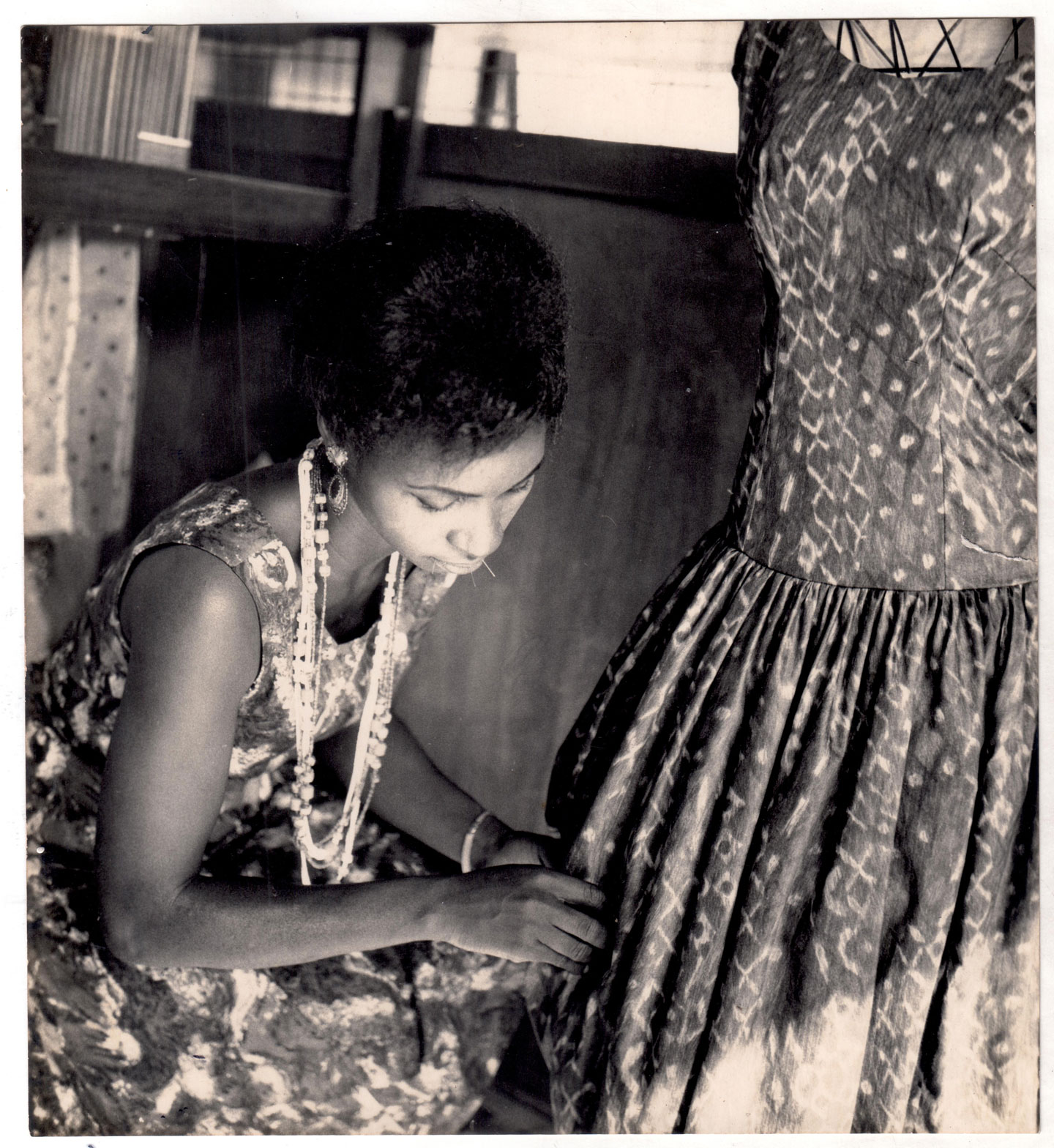 On the mezzanine, the exhibition celebrates the vitality and dynamism of the new generation of ground-breaking African designers, stylists, collectives and fashion photographers.

“A Dialogue Between Cultures” is the new piece designed by Maison ArtCWe from Marrakech, which introduces visitors to today’s African fashion. It was created for the V&A exhibition as a long nude overcoat combining symbols and elements from different cultures. It carries a specific message: “Without culture, we are naked.” 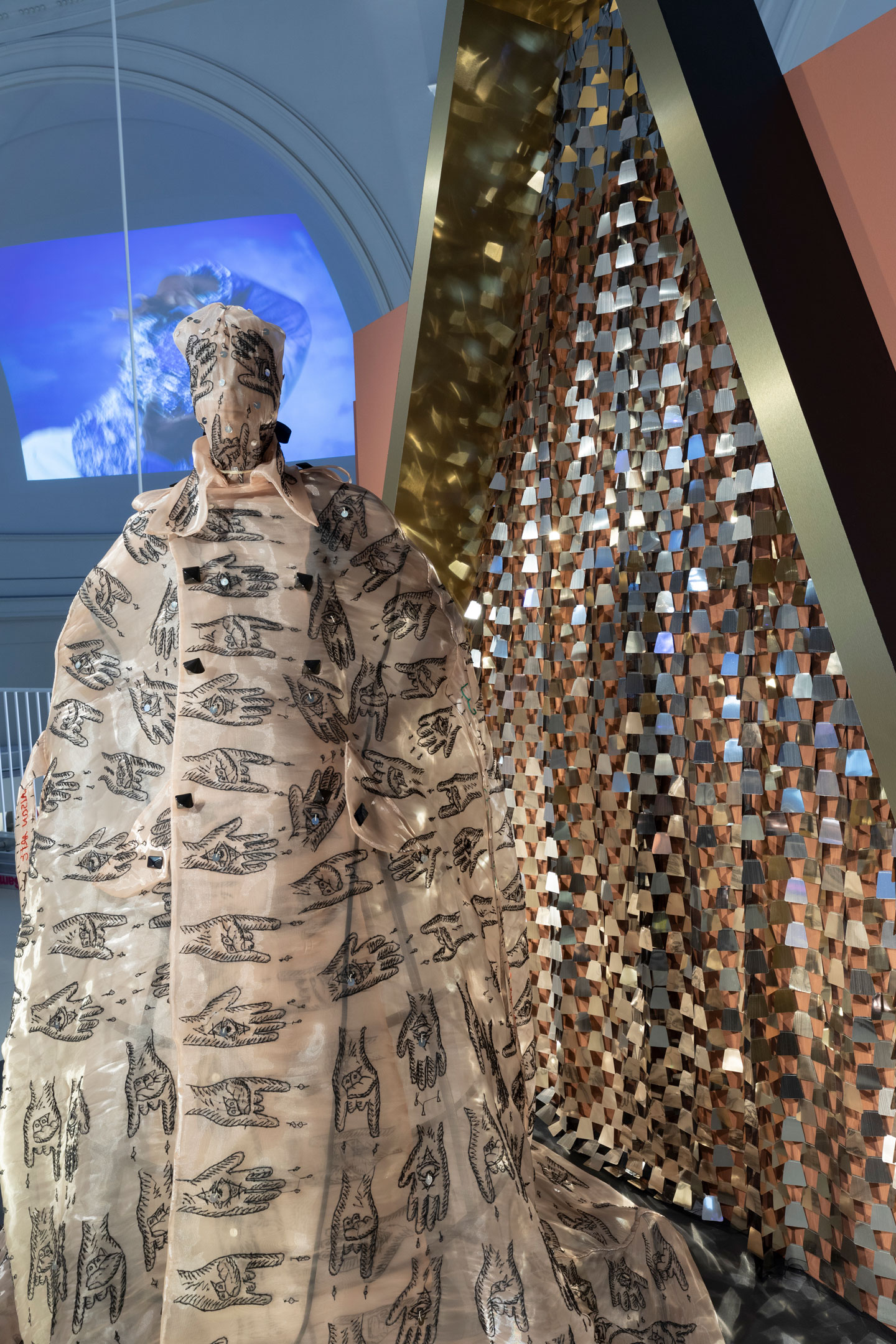 The selected designers challenge assumptions of what African fashion is, can and should be by transcending all boundaries of race, gender and sexuality. The display here is organised in a free exploration experience, designer by designer, combined with a narrative representing their iconic style. 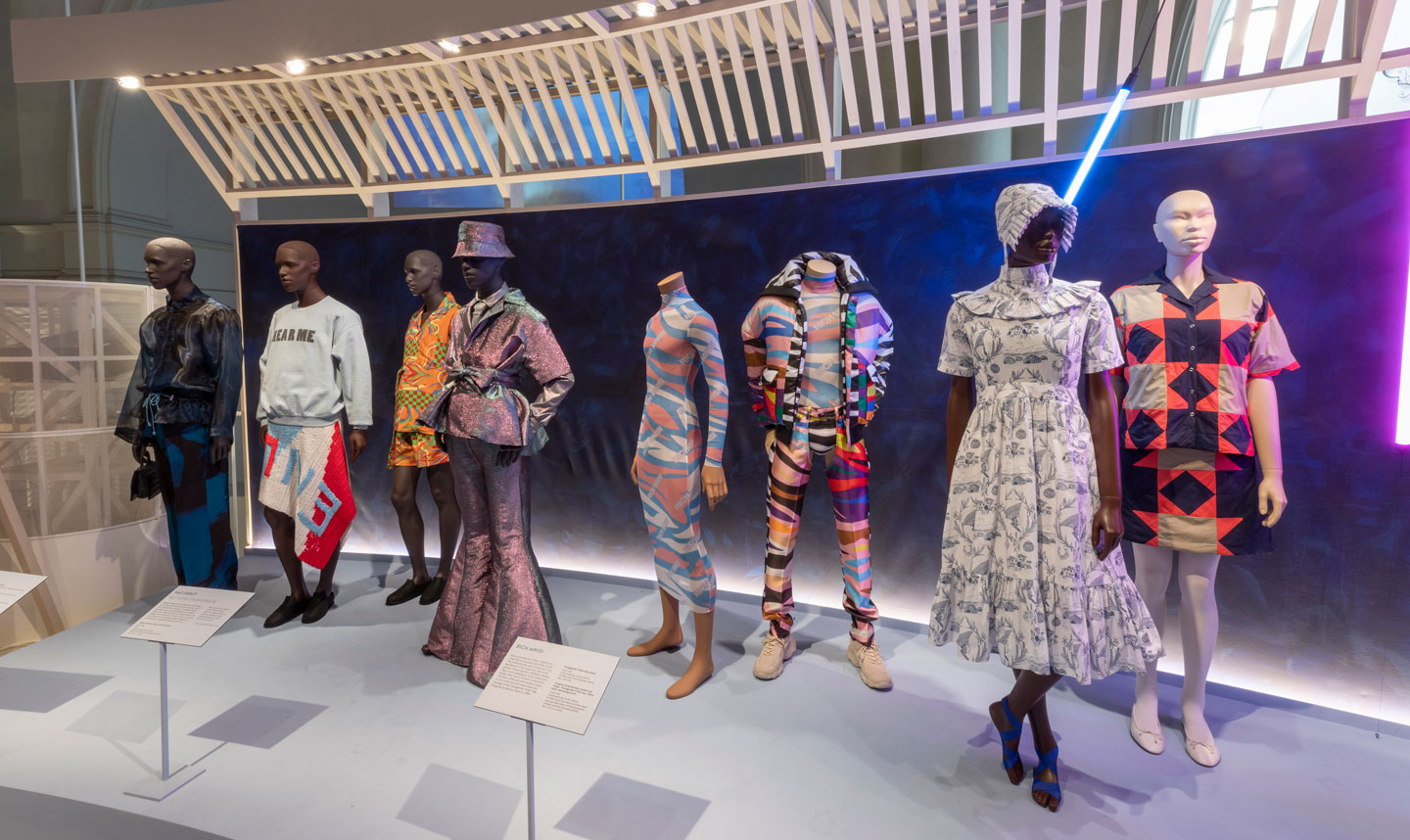 Minimalism is represented by Adebayo Oke-Lawal’s Moshions fashion house, which reimagines traditional Rwandan cultural aesthetics into contemporary pieces, drawing inspiration from ceremonial outfits with the opportunity to redefine the meaning of luxury.

The Mixology area features an ensemble from Iamisigo by Lagos-born designer Bubu Ogisi. The designer interprets Africa’s remote and disparate communities, aiming for a fashion that keeps history alive by preserving techniques and materials, and promoting artisanal and sustainable wearable art pieces as agents of change. 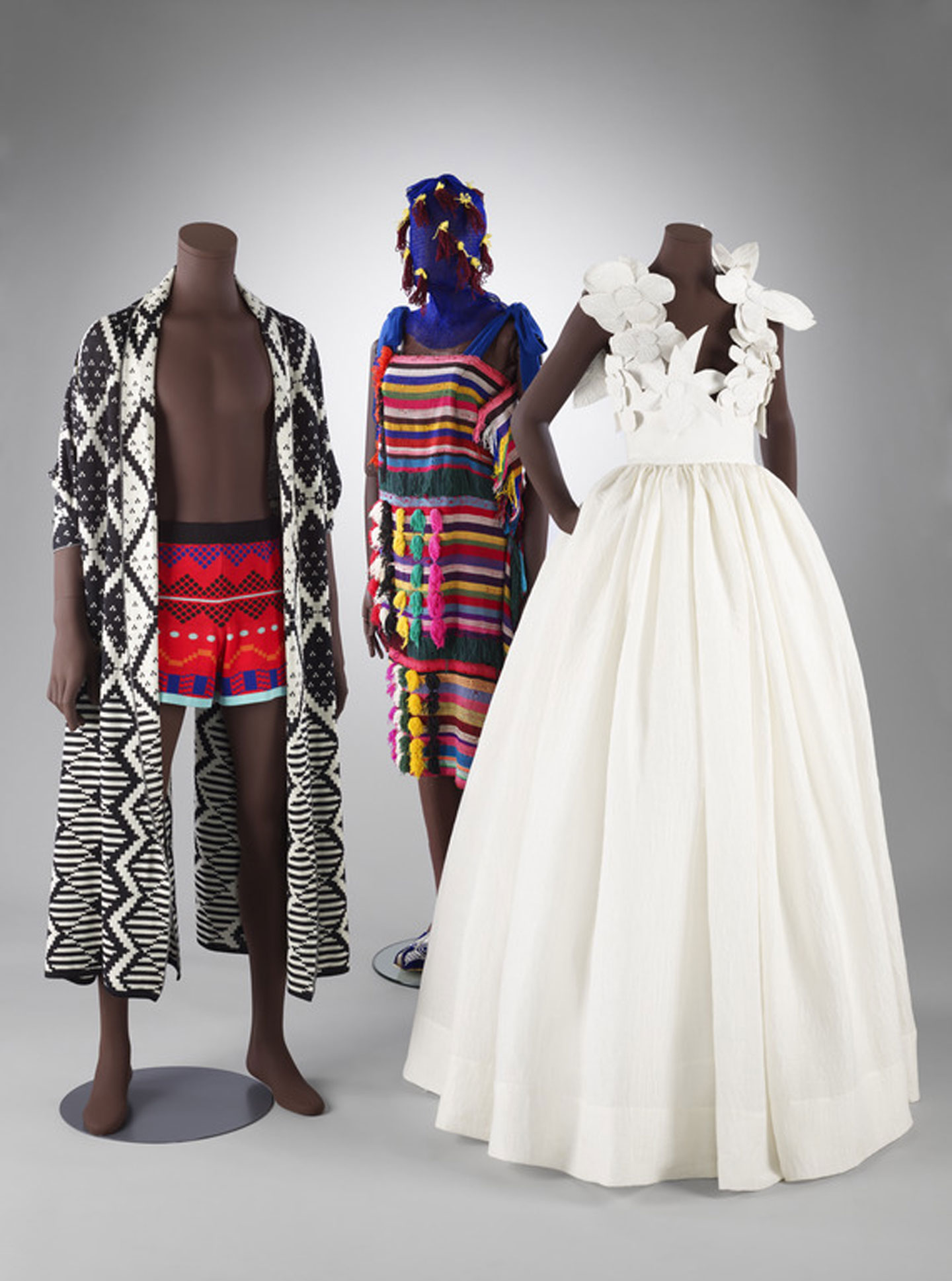 The Artisanal vision is represented by a Nigerian company, Dakala Cloth by Nkwo, which specialises in experimenting with ways to use waste, such as denim, for creating new African textiles while preserving traditional textile craft skills. 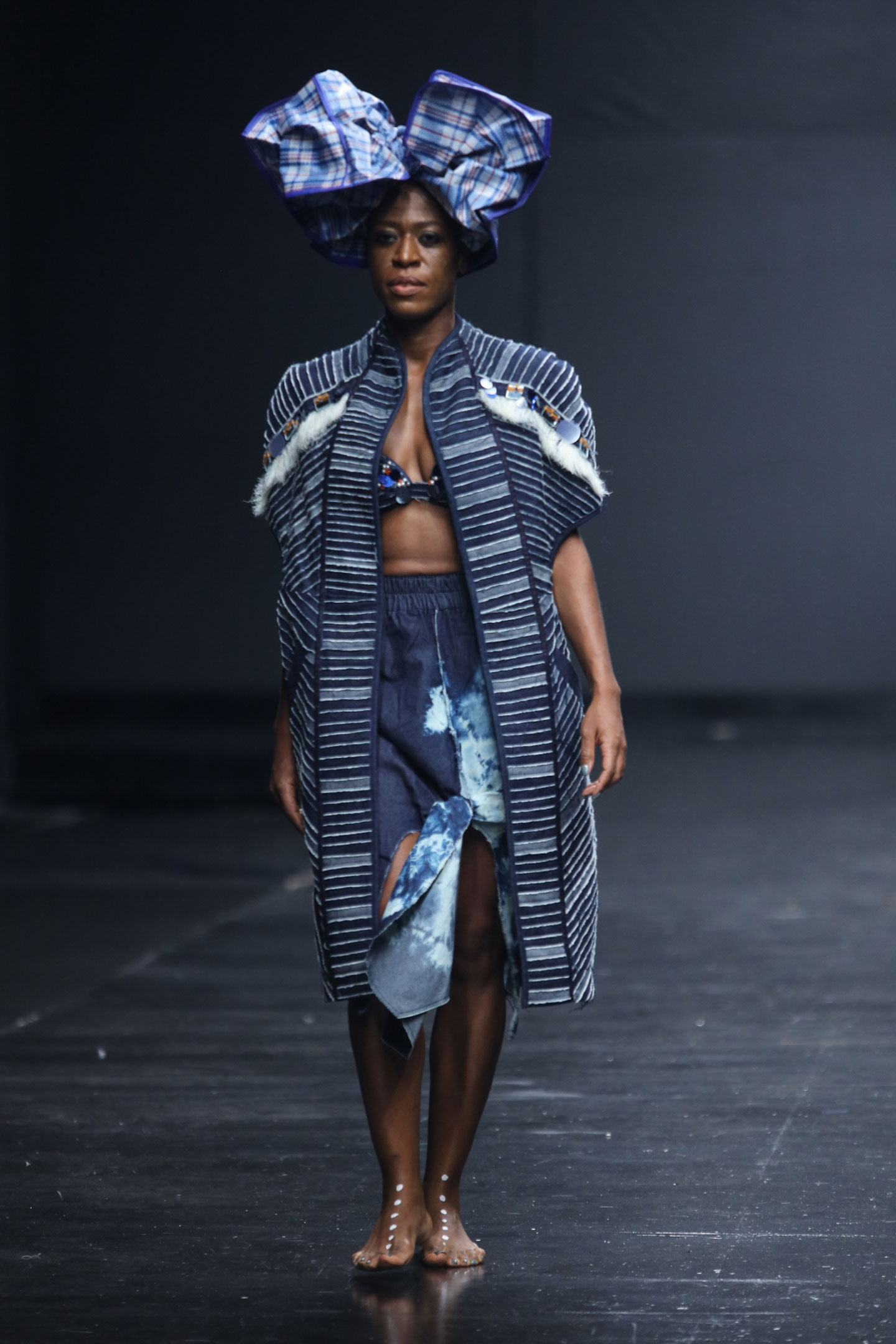 The so-called Afrotopia comes to life from African spirituality and the relationship with our ancestors in the design of Thebe Magugu’s Alchemy collection. 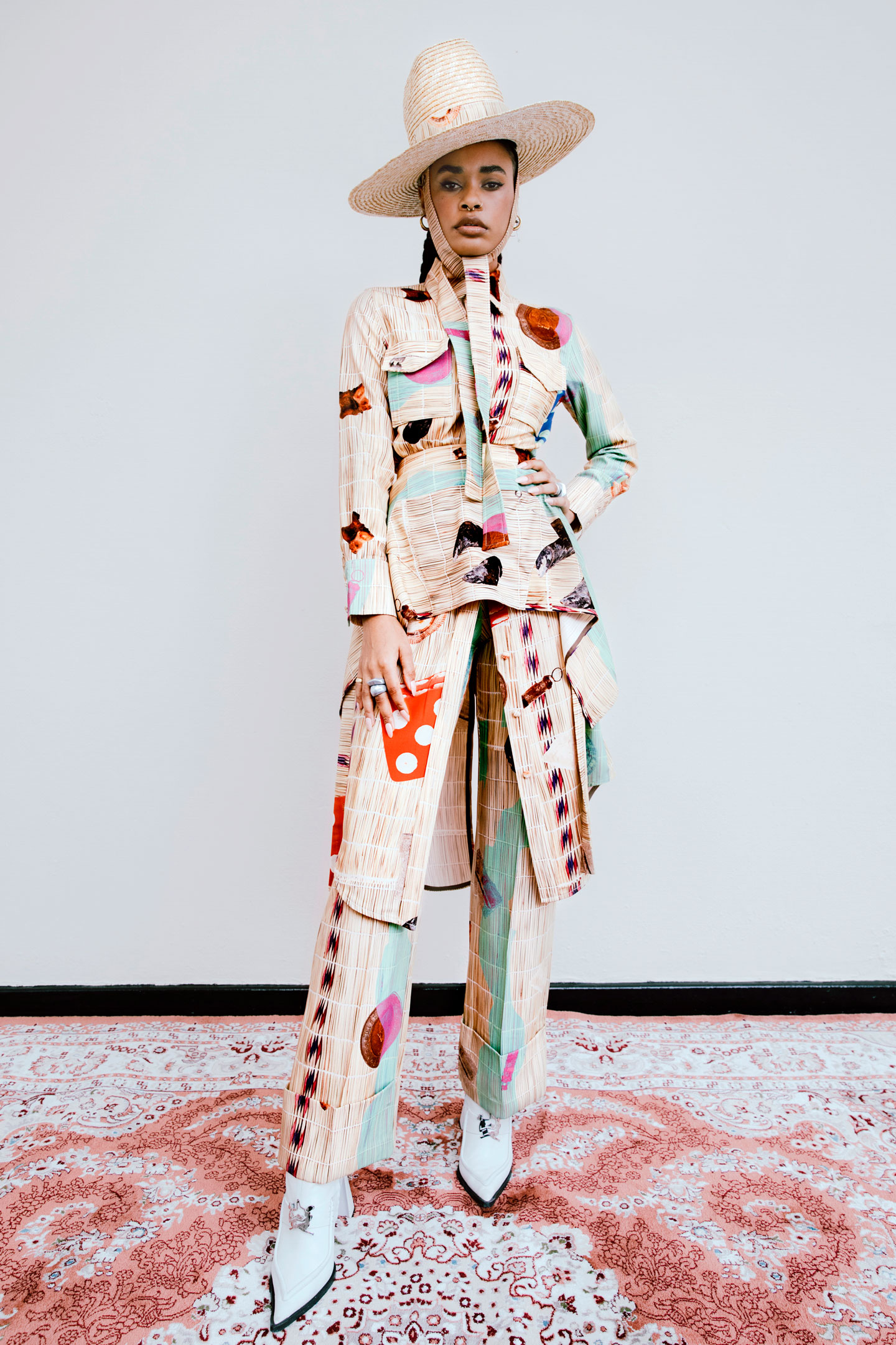 In Sartorialists, costume designer, stylist and photographer Gouled Ahmed provokes society’s expectations by mixing textured garments from the Horn of Africa with contemporary everyday materials to play with notions of identity. With his self-portraitures, Ahmed’s work challenges the lack of nuance in the depictions of non-binary black Muslims’. 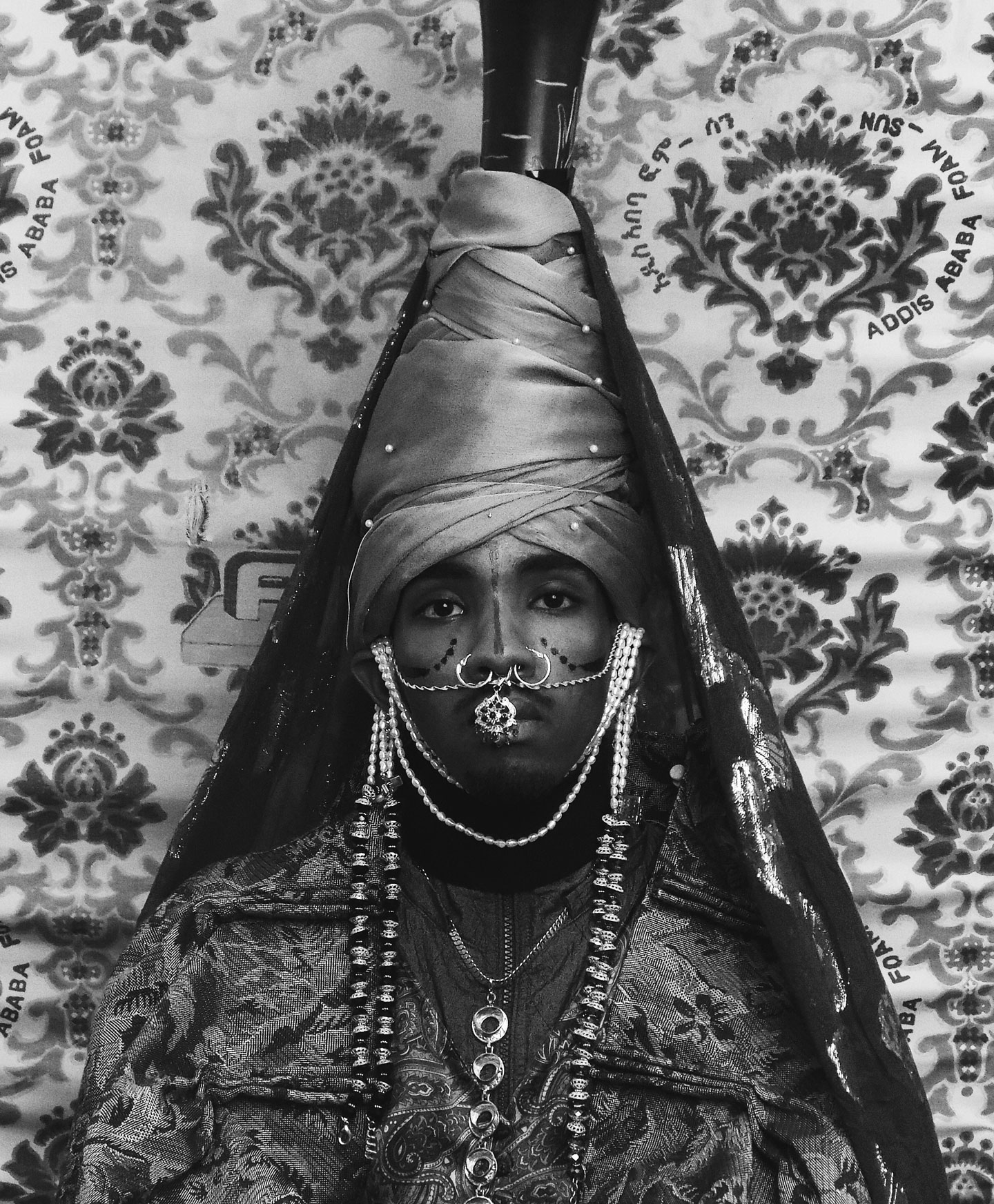 In Adornment, a neckpiece in brass, sisal and borax salt designed by Ami Doshi Shah from Kenya, part of his “Salt of the Earth” collection, represents the intersection between the human form and the inanimate object, the human ingenuity of crafting and the ethos of sustainability while examining the talismanic properties of jewellery. 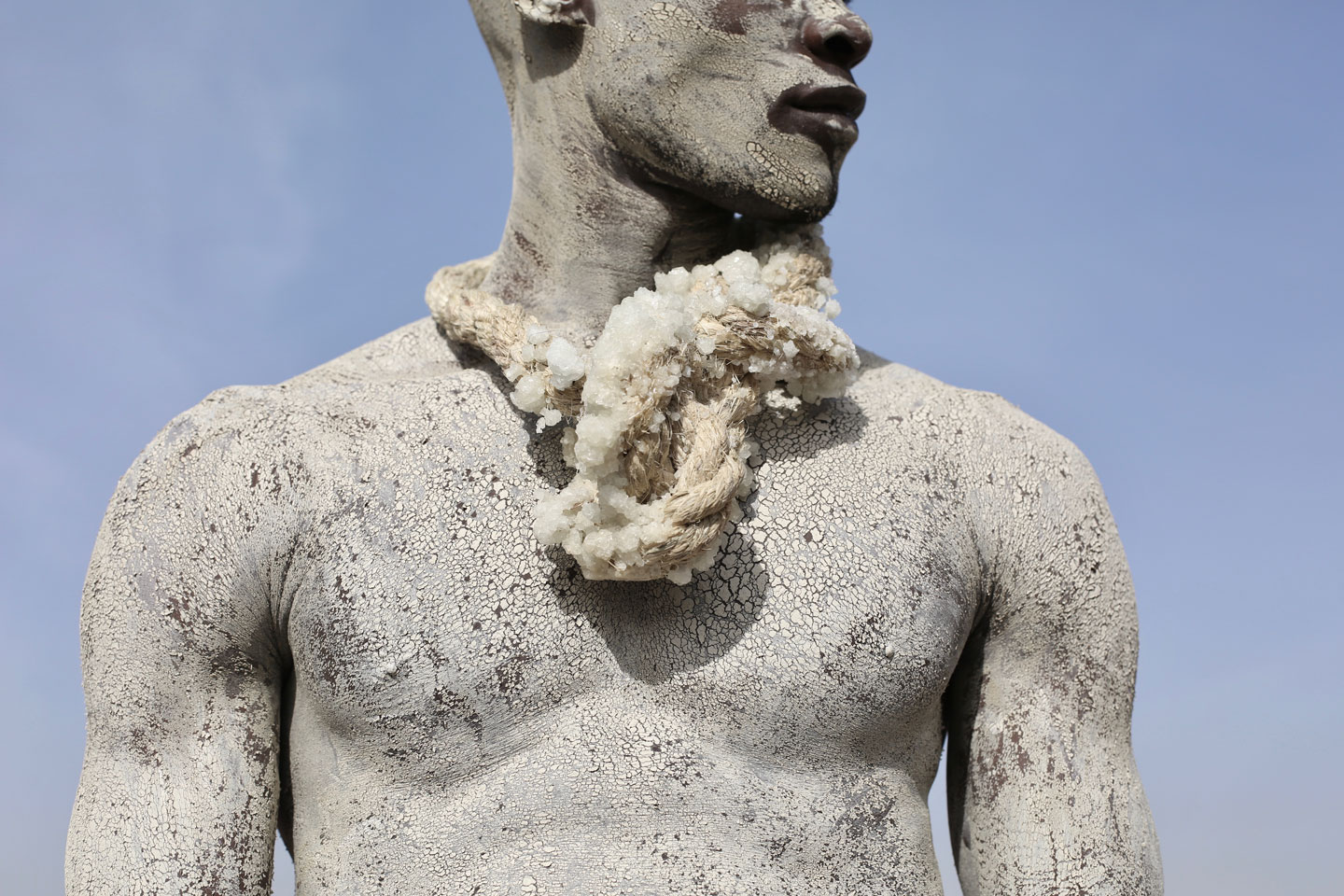 African menswear is represented by the Nigerian brand Orange Culture, launched in 2010 by Adebayo Oke-Lawal. True to his vision that “Fashion can save lives,” he translates Nigerian printed fabrics into contemporary, androgynous styles. 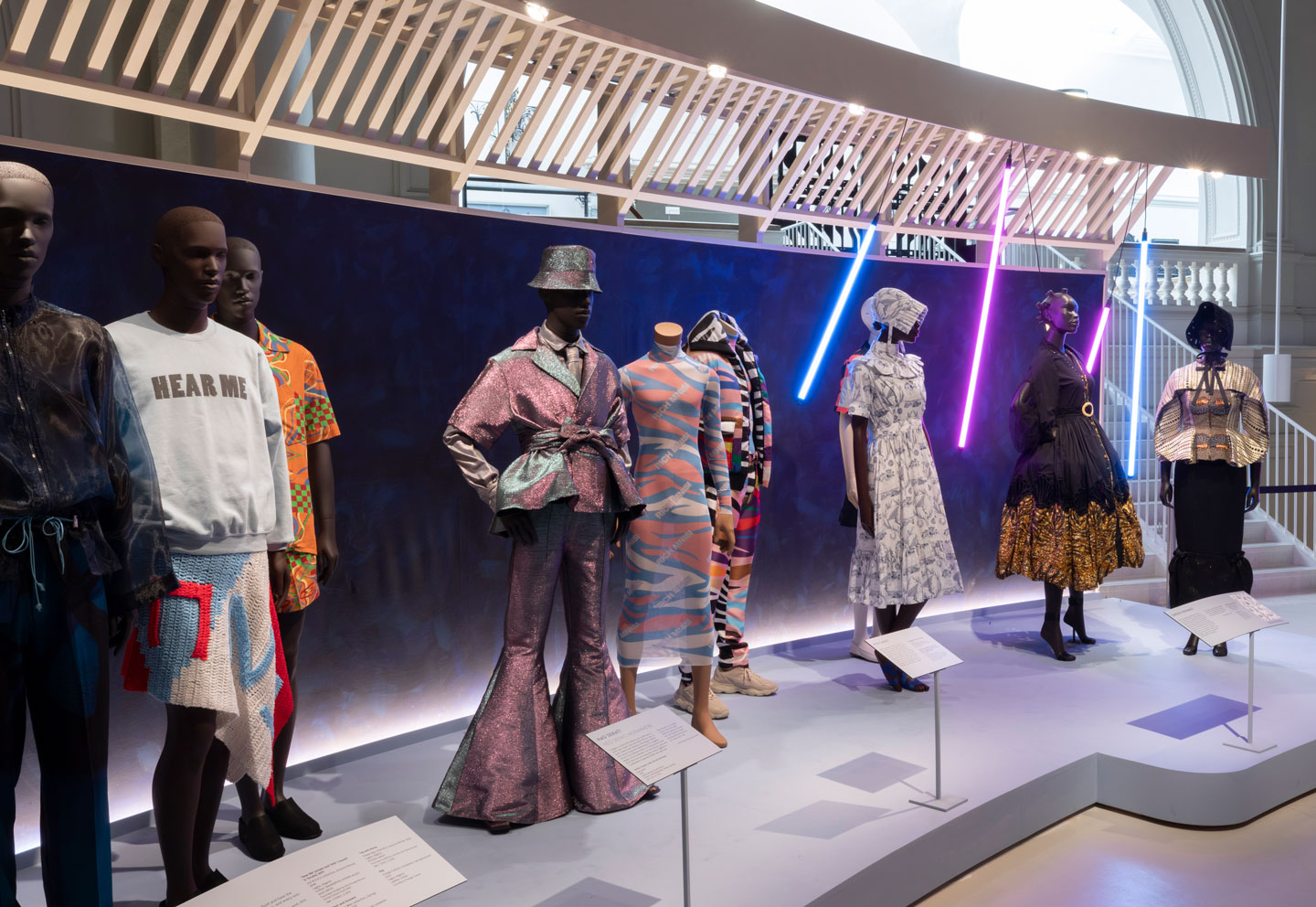 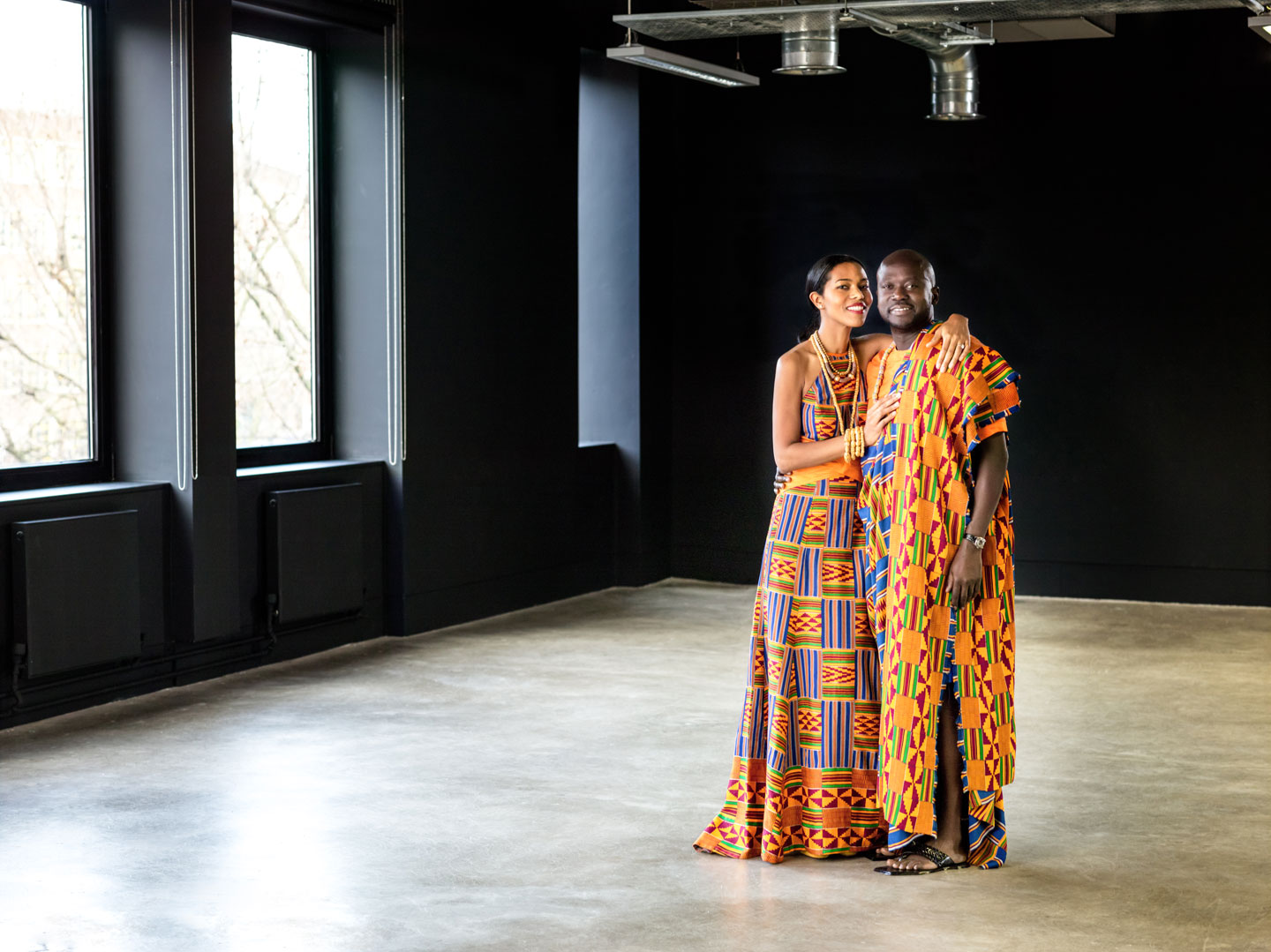 The exhibition tour can conclude with Bonnie Greer’s poetry quote:

“Africa fashion, its essence, is not to be pinpointed; it is nothing one can lay one’s greedy hands on. But something beyond that you can receive: beauty, elegance, joy, dignity, and behind it, spirit (or Spirit)” – Bonnie Greer

All image credits belong to Africa Fashion at the Victoria and Albert Museum, London, 2 July 2022–16 April 2023

An important note: exploring African fashion traditions gives contemporary designers access to a great variety of textile resources to inspire their new creations. However, giving proper credit to sources and their legitimate provenance is fundamental.

The IM Library in London offers this list of books for academic research: