After this show, you will question your idea of masculinity

Who and what defines masculinity? Although it may be open to interpretation, this term has been pretty much historically constructed and defined by society over time. Western culture has entrenched some specific traits to ‘masculinity’ to fit a certain patriarchal and limited idea of what this word can represent.

A specific ideal associated with words like strength, toughness and dominance has reinforced a toxic idea of a masculine prototype oppressing everything related to femininity, leaving no room for differences.

Men’s fashion has been built around a specific cultural and political set of rules, but after centuries of restraint, it is now entering an era of greater openness.

At V&A museum in London, an exhibition explores how designers, tailors and artists – and their clients and sitters – have constructed and performed masculinity, and unpicked it at the seams

“Fashioning Masculinities: The Art of Menswear” is the current exhibition at the V&A museum in London. With many events buzzing around, it dives into men’s fashion through the centuries and cultures around the world.

The exhibition is curated by Claire Wilcox and Rosalind McKever and sponsored by Gucci, whose creative director Alessandro Michele’s goal has always been to rid menswear of toxic masculinity by making fashion more gender-neutral. 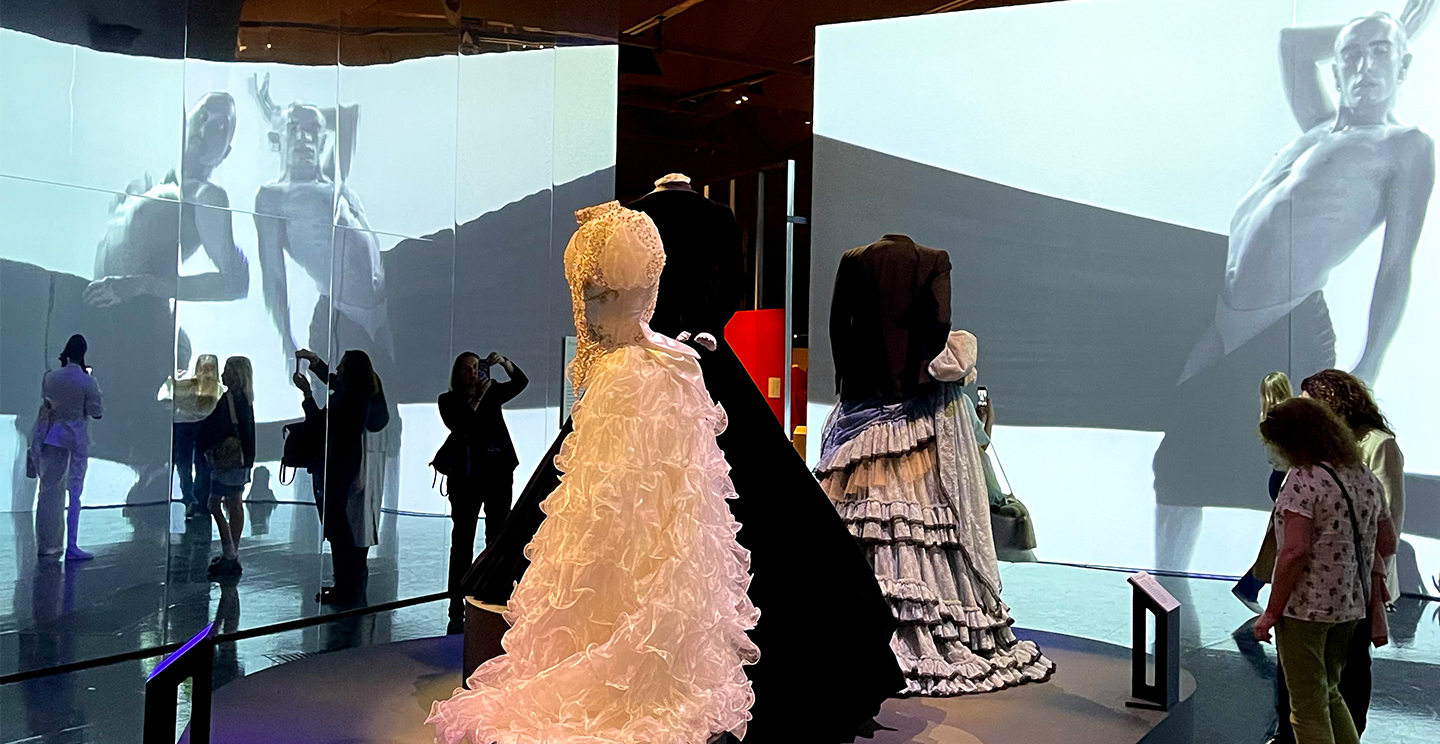 Aiming “to celebrate the power, artistry and diversity of masculine attire and appearance”, as a V&A spokesperson said, “contemporary looks by legendary designers and rising stars are displayed alongside historical treasures from the V&A collections and landmark loans: classical sculptures, Renaissance paintings, iconic photographs, and powerful film and performance.”

Do clothes make the man?

“Do clothes make the man?” is one of the first questions raised in the exhibition.

“Fashioning Masculinities: The Art of Menswear” presents not only the evolution of men’s clothing and fashion but a deeper perspective on a more complex social and psychological notion of this art and its artists.

An exhibition honouring the craftsmanship and diversity of male clothing with a wide range of fabrics and colours – all work together to tell a story and show the core references of menswear through time.

The space has been divided into three sections: Undressed, Overdressed and Redressed. These do not follow a precise chronological order: each room is themed and filled with artworks, clothing, and sculptures, as well as paintings, photographs and videos.

From plaster casts of the Apollo Belvedere to Jean Paul Gaultier’s iconic fashion: Undressed is all about the male body and underwear

From exploring antique naked figures to more contemporary and unconventional undergarments, Underdressed investigates the relationship between the male body and the clothes that dress it.

The statues of Apollo Belvedere and Farnese Hermes, both iconic references for artists and tailors, are the pillars of this room. Here, the mood is dictated by a primary conflict – the search for a divine, sculpted body.

For decades, artists emulated the desire for perfection in their designs. It all boils down to the essence of what the body and its forms represent, but also the ostentation of a hypermasculine body type like that of Greek gods.

There are also creations by other famous designers, such as JW Anderson, Ludovic de Saint Sernin and Virgil Abloh, exploring the idea of a more feminine concept by working with ​​translucence and transparent fabrics.

As the exhibition’s curators suggest, we are presented with an effect seen primarily on women’s clothing and uncommonly on men’s designs. These notions have allowed designers to keep exploring and breaking gender barriers through creativity and inclusion.

On the walls are photos by artists such as David Hockney and Lionel Wendt, and some famous Calvin Klein commercials. Yet, the concept of diversity is celebrated and embraced here, specifically with a video of half- and fully-naked men whose bodies are certainly not all carved in marble but seem to be getting the attention of many visitors.

Some might find it unflattering compared to the sculpted muscles we have been used to until now, but it raises questions about inclusion and body positivity within the male gender.

This first room is all about scrutinising male beauty origins and ideals, stripped down to the essence of the male body and its standards, and how these ideals have been re-fashioned and readjusted over time.

The second gallery is a bedazzled explosion of colour, embroidery, sequins and attention to detail.
Upon entering, we are greeted by strong colours such as dark, intense blue and green walls that emphasise paintings depicting typical 18th-century white, wealthy and questionably heterosexual European aristocrats.

These men would establish their position of power and patriarchy through an excess of grandeur in their clothing, with heavy robes and feathers, gold chains and ribbons, tassels, and brightly coloured fabrics, mainly imported from the East.

Exclusivity at its finest. The 1970s style in this space epitomises flair and flamboyance with florals and paisley prints. Nowadays, many designers are re-exploring these motifs and tints, reclaiming the power they hold.

Several themes and aesthetics are on display in this room, but the most prevalent one is Camp, as also acknowledged by the curators. The topic is reflected in 18th-century paintings such as Joshua Reynolds’ portrait of Earl Charles Coote, whose pink ceremonial robe scream patriarchy, flamboyance and excess.

The theme continues with extravagant dresses and gowns such as Dolce&Gabbana’s or Randi Rahm’s tailored suit for Billy Porter at the 2019 Golden Globes, which included a long cape with a gorgeous lining and brightly coloured embroidery.

Both the Earl and Mr Porter emphasised a specific position and the re-appropriation of their own beliefs through fashion – even if one of them saw it as a symbol of privilege and distinction, and the other as a bastion of resistance against toxic masculinity.

This gallery continues to offer other examples of sumptuous design, with other contemporary artists and fashion houses such as Louis Vuitton and Fendi recently exploring the idea of extravagant designs and gender-neutral clothes in their runway shows.

From a colourful, lavish room to a dark, urban and industrialised one, the third section explores a period of European tailoring defined as classical.  It examines the construction of men’s 19th-century suits – through fashion icons of that time like socialite Beau Brummell – until the dissolution of the suit with contemporary and less conventional designs like those by Rick Owens or Haider Ackermann.

Menswear in the 19th century was moulded into a more functional form, mirroring and adapting to the fast changes of European industrialisation.  The suit became a new status symbol, and with the rise of mass manufacture, it quickly became a modern yet universal uniform. 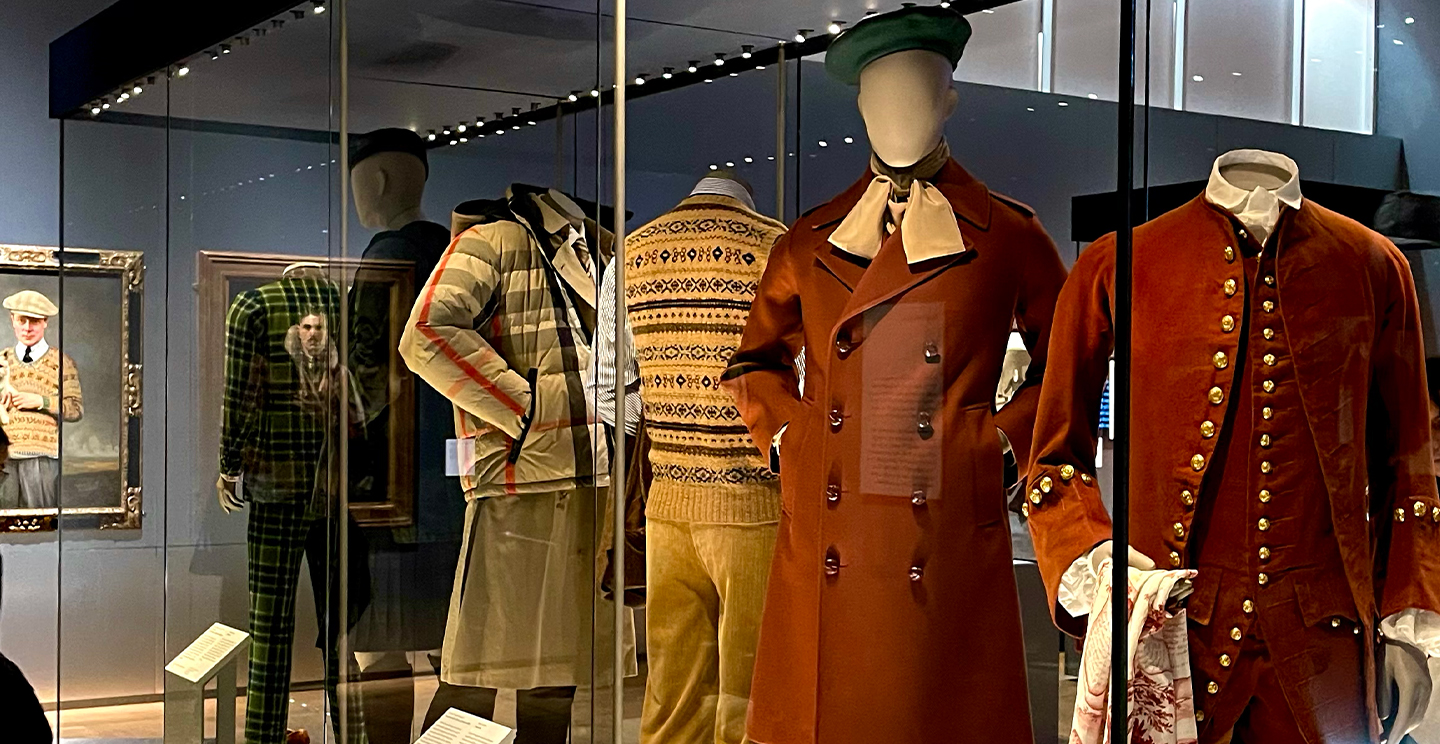 The closing part of this last gallery opens with a drawing, Men in the Cities (1981), by Robert Longo; here, we start seeing the traditional suit dissolve as new generations begin to move towards more fashion-conscious styles.

With trends often turning out to be political statements, men started using fashion as a way of rebellion, especially in the 60s and 80s. As we continue to explore the gallery, we look at some of the latest takes on suits. Traditional tailoring still has its appeal today, but once again, the new generation of designers is dismantling menswear and masculine traditions by providing a fresh take on this iconic style.

The last part of the exhibition is a room with floor-to-ceiling screens showcasing a film by Quentin Jones. In the middle of the room are three of the most iconic looks of our generation: the Christian Siriano tuxedo gown worn by Billy Porter on the 2019 Oscars red carpet, Bimini Bon-Boulash’s bridal look in 2021 RuPaul’s Drag Race, and finally, Harry Styles’s iconic Gucci custom gown for the December 2020 Vogue cover.

The room is introduced as gender non-conformity through dressing, stating that menswear and womenswear are no longer distinct categories in fashion and that society and the fashion industry are changing how gender is represented.

Pros and cons of the exhibition “Fashioning Masculinities: The Art of Menswear”

From unbending conformity to creative individualism, “Fashioning Masculinities: The Art of Menswear” shows us different approaches to fashioning masculinities throughout history, yet many questions are left unanswered.

It does not address many other relevant themes regarding the reshaping of masculinity and menswear. Despite trying to get away from the toxic idea of masculinity mainly imposed by Western society, most of the examples on display derive precisely and almost exclusively from Europe and North America. 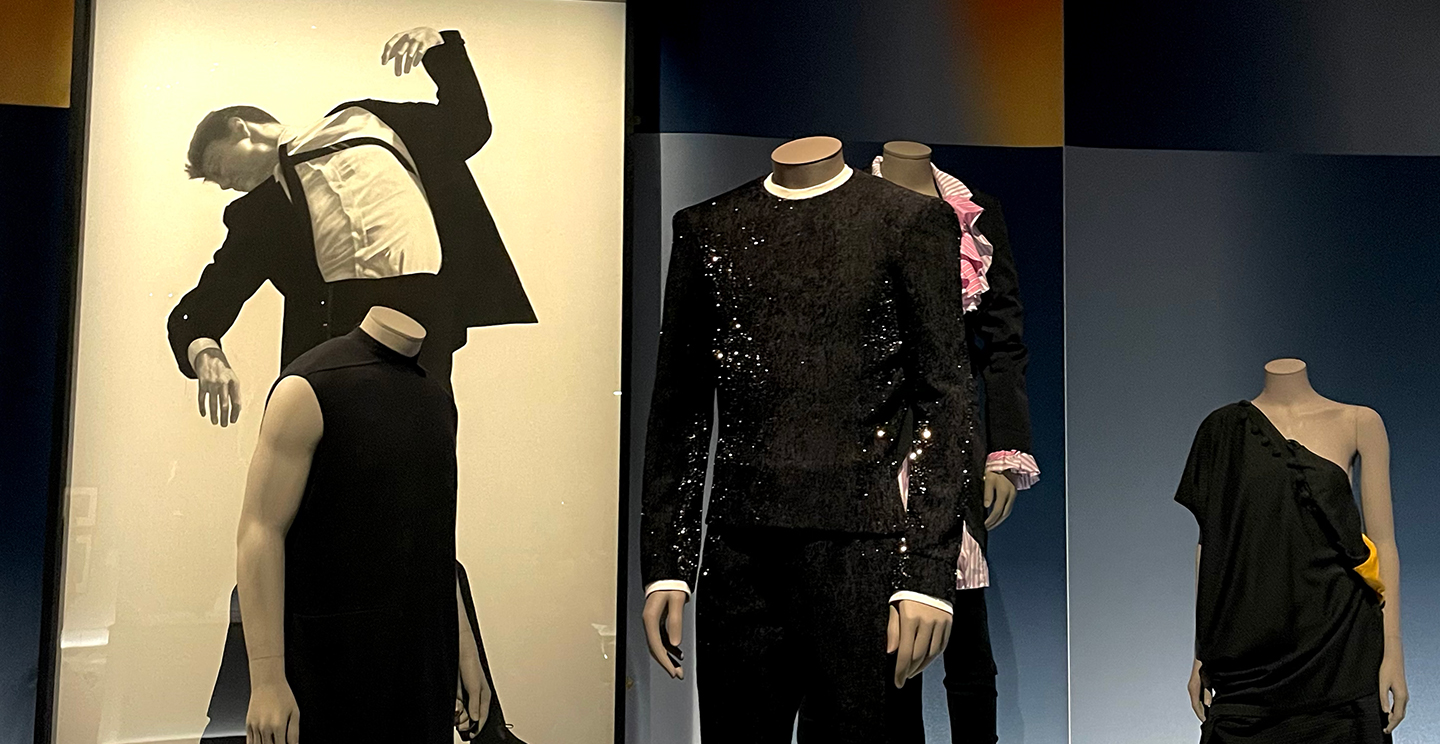 Not only that. The story of this exhibition is also seen exclusively from an upper-class perspective, evaluating only the elite of the elite. But according to a recent piece in The Guardian, the exhibition’s curators have just scratched the surface of men’s fashion, as “it was difficult to represent the entire menswear industry in a single event.”

Fashioning Masculinities is worth seeing as it showcases stunning outfits and iconic pieces. The exhibition ends in November 2022, giving fashion lovers plenty of time to go and see it.