A chat with the artists behind the tribute to Virgil Abloh

The exhibition “Coming of age” first took place in Los Angeles in 2019, and then travelled to Tokyo, Milan, New York, Beijing, Munich and Seoul. “Coming of Age”, in loving memory and honour of Virgil Abloh, was unveiled at Fondation Louis Vuitton in April as an extension of the original group show, with an updated list of artists and daily activities such as workshops, public talks and concerts. 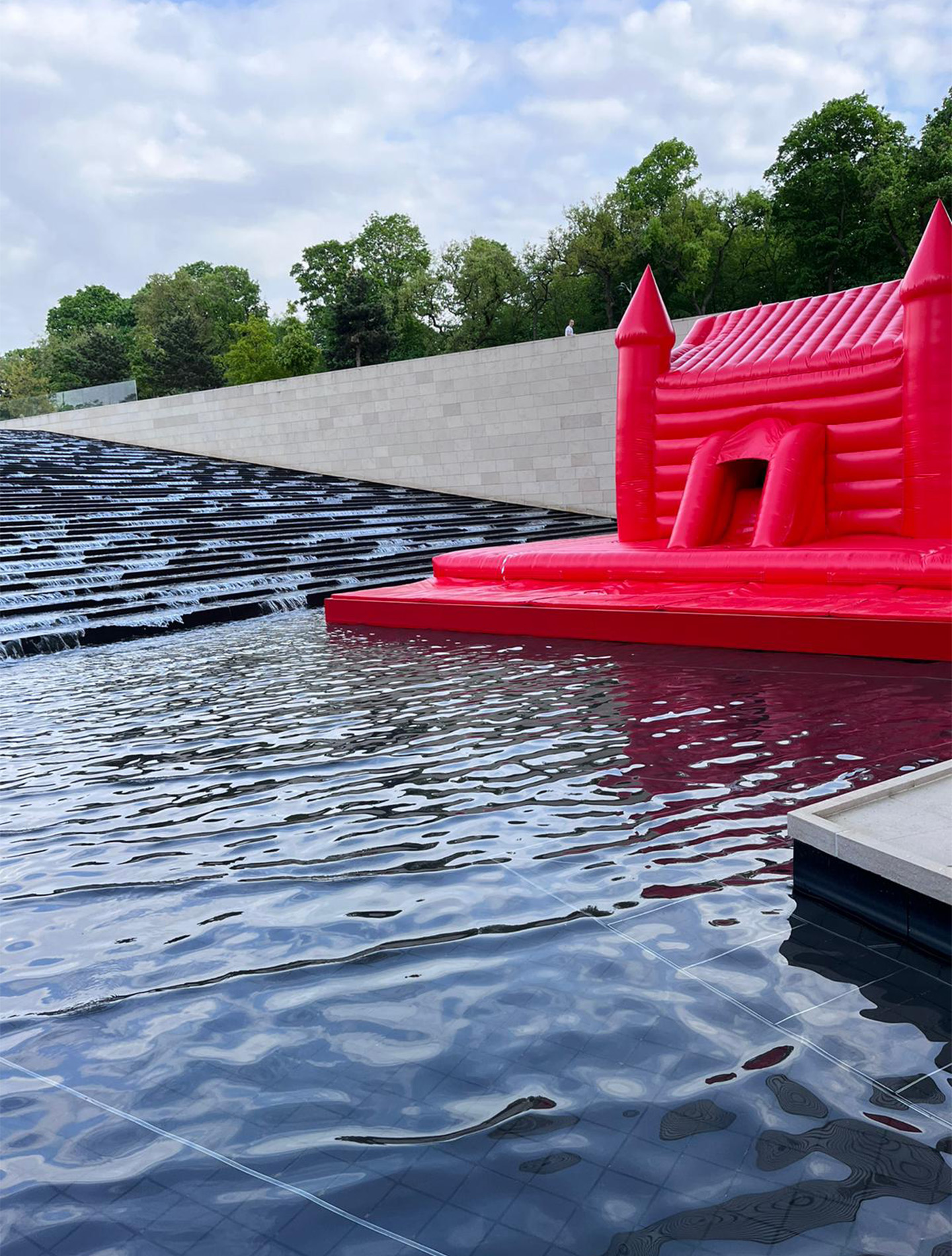 Visitors had the opportunity to experience the exhibition first-hand and participate in all the activities alongside artists, photographers, musicians, directors, and animators. 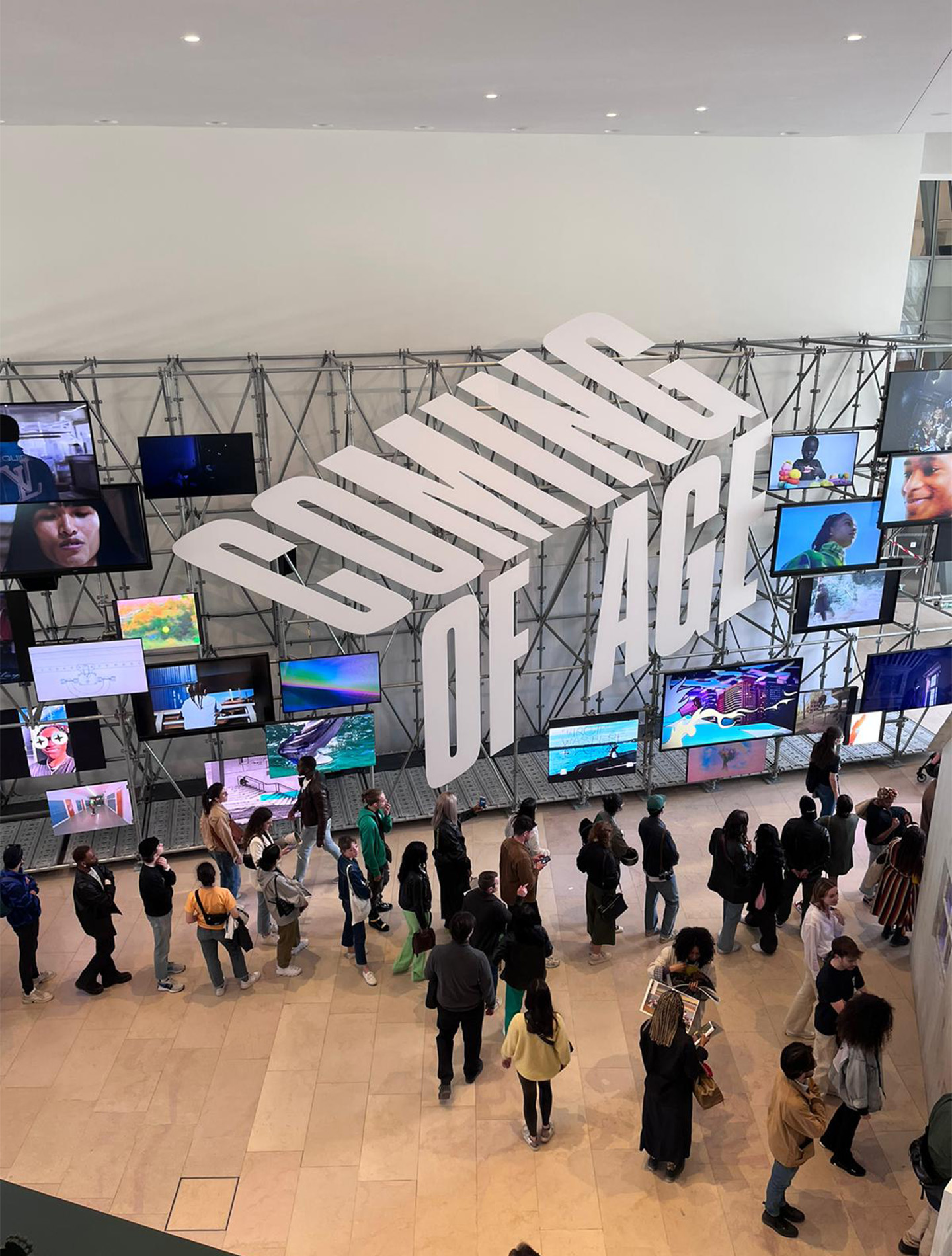 One of the main goals of Virgil Abloh’s creative journey was always to open doors for the younger generation and ensure that inclusivity broke down barriers in the sometimes-stagnant fashion industry.

From his first Pyrex Vision brand becoming a streetwear sensation to his appointment at Louis Vuitton as the first BIPOC person in a Creative Director role, the industry’s eclectic talent pioneered novelty and inclusivity in his work. 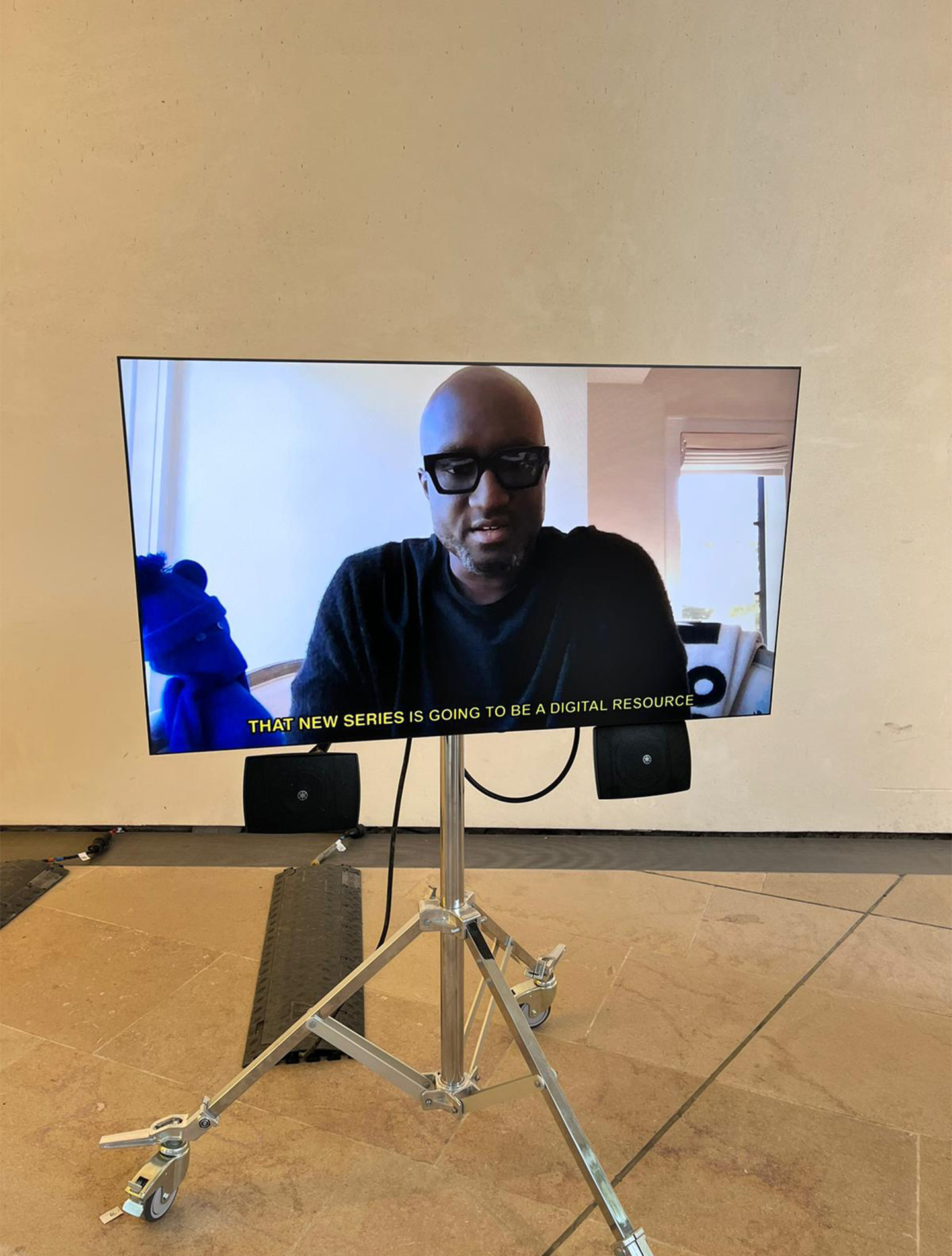 Virgil Abloh quickly became a fashion favourite with Off-White buzzing collections and his many art, music and architecture projects.

This is why Fondation Louis Vuitton showcased an updated iteration of “Coming of Age” at their Frank Gehry-designed institution just a few stops outside of Paris. It was a tribute to a hands-on creator still based on the concept, diversities and complexities of male youth and boyhood across class, race, social economics, subcultures, isolation, and camaraderie. 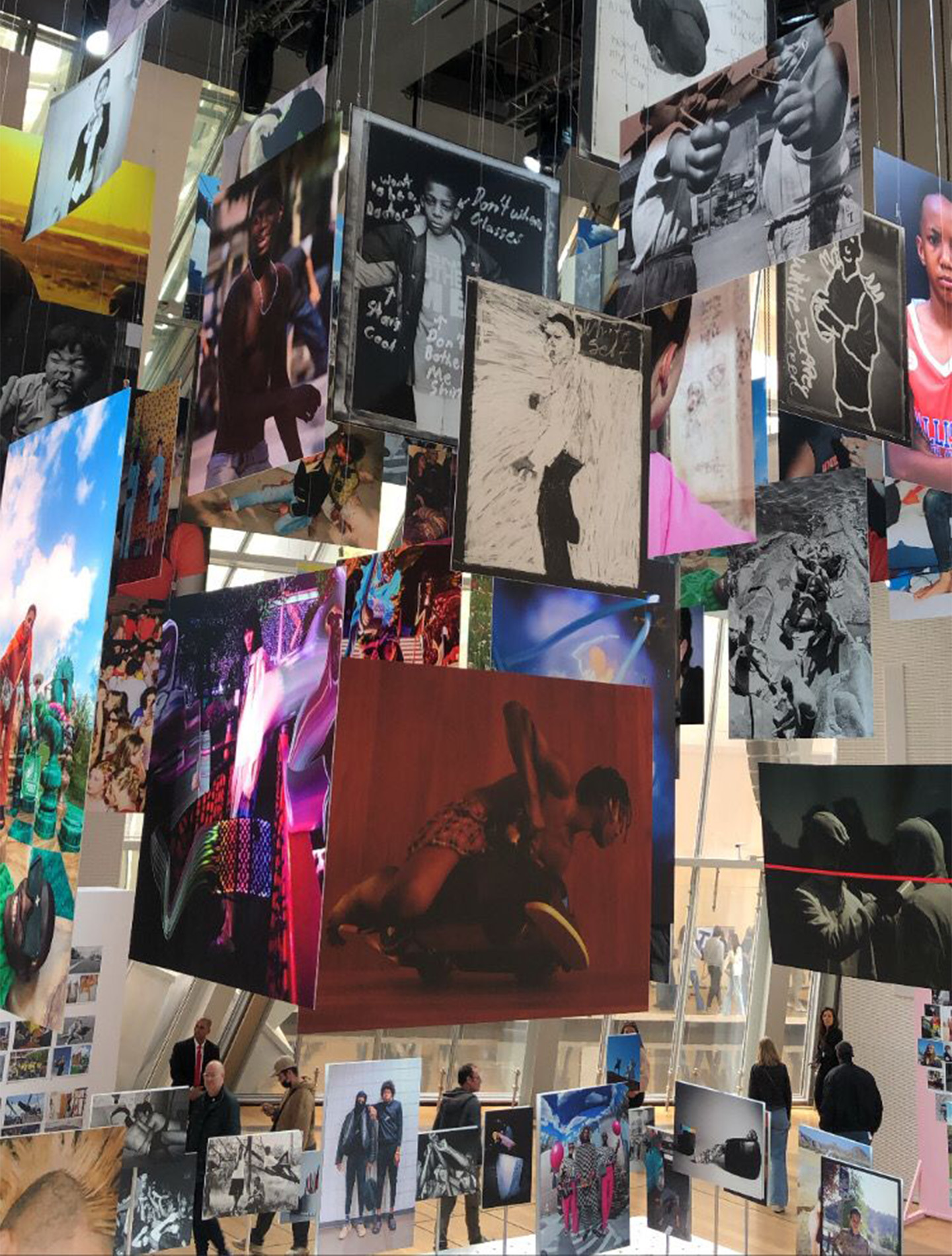 We sat down with the artists who took part in this new exhibition to talk about their work, inspirations and Virgil Abloh’s unique legacy. 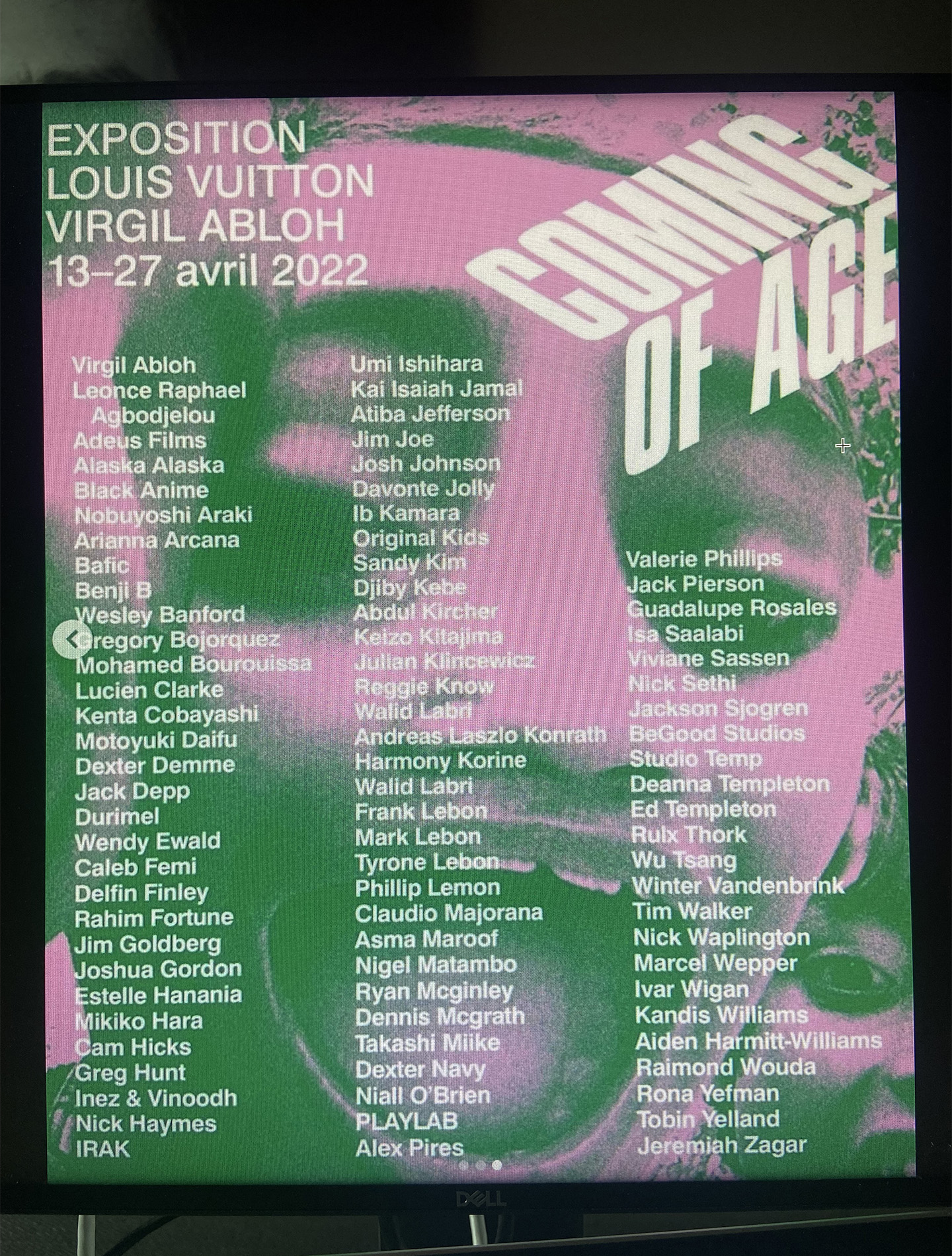 Could you tell us more about your works for the "Coming of Age" exhibition? What was the inspiration behind them?
I created a short skate film called Stuck Between Moments. It was documented from 2017 to 2020 while my closest friends and I were in college. It captured a time of transition as it was before any of us truly felt like adults – a time of discovery, and skateboarding was there all along the way. I had the opportunity to share this intimate film at the “Coming of Age” exhibition and I thought it was a perfect fit. Couldn’t be happier to be amongst so many amazingly talented artists.

What is Virgil Abloh’s legacy in the modern art and fashion scene?
I believe Virgil’s influence is something we will continue to see in the years to come. He had an organic, childlike approach to everything he did, with genuine excitement and exploration behind everything. His work felt personal and intimate in a largely impersonal fashion world. He lifted so many people up with him, and I hope to see more giving creatives like him in the future.

How would you describe the simple yet mind-blowing statement "coming of age" as an inspiration?
Coming of age references a very passionate time – probably the greatest passion one can experience in life. I think it’s a reminder of that time before true adulthood when the magic of life feels so tangible. The most incredible thing is to find a way to keep that same passion you had when you were that age.

What would be your advice to raising artists and art students?
My main advice to any student is to stop overthinking and over-intellectualising your work. Collaborate with as many people around you as possible, start a community, have discussions, and do as much as possible without fear of doing a lousy job because this is inevitable and needed.

What are the inspirations behind your work right now?
Good images will only take you so far without a narrative arch. And then I’m also just excited to constantly explore different photographic mediums and see what I can get into. Keeping my inner child close to me at all times.

Could you tell us more about your works for the "Coming of Age" exhibition? What was the inspiration behind them?
I am usually inspired by what is around me and what I experience directly, and the photos for “Coming of Age” are rooted in the theme of comfort – something I constantly champion through my work. I wrote a poem on Virgil’s idea of childhood but rooted in the specifics of my personal experiences and what I think would resonate with a wider audience – reminiscent imagery like the idea of having your mum wash your hair or being dwarfed by a door frame.

What is Virgil Abloh’s legacy in the modern art and fashion scene?
Virgil Abloh’s influence has been twofold. Namely: the need for inclusivity and novelty. He has always strived to bring new voices to the forefront, regardless of where they came from, and this in itself is truly admirable, something that all in high places should aim to do.

What would be your advice for emerging artists and art students?
There are of course seasons of input and output, so don’t be too down when it doesn’t feel like creativity is coming easily or at all. It is just part of the process, and after winter, there is always spring.

What are the main themes of your work today and what does photography mean to you as a medium?
I am currently very interested in exploring traumas and how people navigate with them in some scripts I am writing. I’m also focusing on ideas of home and, again, comfort in my upcoming book. I would say that photography is what I go to when I don’t have the words for what I want to say.

Could you tell us more about your works for the "Coming of Age" exhibition? What was the inspiration behind them?
The work I showed during the “Coming of Age” exhibition is from a project I did between 2014 and 2020, titled Who’s Talking? That photograph shows a young American boy, Seth, amongst his ventriloquist dolls. He is at home, sitting on his bed and staring at the camera, with all his puppets surrounding him – a metaphor for a very special family.

What is Virgil Abloh’s legacy in the modern art and fashion scene?
He opened doors and minds to many young creatives. He seemed one of a kind. I worked for him several times through Begood Studios (Lina Kutsovskaya), and I am so grateful for their trust in my work. They could see how my world would apply to commercial images with on-set tips like “now go freestyle!” and I think that’s what Virgil Abloh was known for: finding different paths, away from the established ones, by looking for creativity everywhere and keeping a free spirit.

What would be your advice to emerging artists and art students?
Listen carefully to your own artistic voice: sometimes it is a scream, but sometimes it is a tiny little voice you can hardly hear, although it is there, and you have to trust it. It is there for a reason. I always advise to try not to lose this voice. Believe in your vision: it sounds cliché, but it is so true; if you feel that what you are doing is not exactly what people expect from you, that is good! Keep that direction!

What are the main themes of your works at this stage of your creative journey?
I’m interested in people who take a different path than they were expected to, who are not afraid to express the person they want to be, even if this involves suffering, doubts, rejection, and loneliness. My creative journey is also based on the creativity of many of my subjects; I often photograph artists of any kind, from drag queens and puppeteers to wrestlers, painters and dancers. I’m happy when I see people being passionate about what they do.

Could you tell us more about your works for the "Coming of Age" exhibition? What was the inspiration behind them?
Virgil loved youth and the energy it brings to the creative realm. He was a supporter of fringe artists and a hunter of those undiscovered or marginalised. I was inspired by his approach to creativity and collaborated with Brooklyn rapper Deadboy to make a series of images.

What is Virgil Abloh’s legacy in the modern art and fashion scene?
His influence on fashion is everywhere. Virgil turned urban sportswear into an aspirational luxury item and lifted the perception of stigmatised groups for the world to see. He embraced this idea of reinvention and reinterpretation in art and fashion. He did not shy away from advertising his inspirations but celebrated them by sharing the creative credit with those that came before.

What would be your advice for emerging artists and art students?
Find your goal, dedicate yourself to it, stick with it… and be ready for a rocky ride. And always have faith in your viewpoint, don’t try to please others; just make the work you want to see.

What are the main themes of your works right now?
I am writing and making films. I’m interested in the social transition that is taking place with technology. I’m developing a feature film project on this theme, set in 2050. It’s a strange place ahead of us.

Could you tell us more about your works for the "Coming of Age" exhibition? What was the inspiration behind them?
It’s a mixture of the ones I shot for the Louis Vuitton autumn-winter 2019 campaign and the portraits I took. I have lived in communities away from my family since my early 20s; the everyday photos and portraits on display are my friends from those communities. I wanted to add drawing elements to the photographs, and when I did that digitally, parts of the images became paintings. Then the paintings and pictures combined to create a work with vibes that are like an imprint of my past.

What is Virgil Abloh’s legacy in the modern art and fashion scene?
I think it was Virgil who created an environment where the younger generation could collaborate with big brands in a way that transcended nationality and race as if they were playing with each other. Culture mixes different genres, and it is crucial to reduce the boundaries as much as possible. We need a conductor to bring them all together so they don’t fall apart.

What would be your advice for emerging artists and art students?
Be free from the system and not be too tainted by the dewy-eyed – my mentor used to say this. Don’t just think, but feel the sense of your body. Don’t get just caught up in yourself. And don’t be too serious!

What are the main themes of your works at this stage of your creative journey?
People and cities. The “Coming of Age” project made me want to take pictures of people again. I hope to depict the city as seen from people’s perspectives, not people as seen from the city’s point of view.