When it comes to fashion shows, there is a clear gap between the accessible, product-oriented shows in Milan and the very experimental collections in Paris. This divide became more topical than ever at the latest Milan Men’s Fashion Week, where an extremely streamlined, efficient and austere season resulted in wearable but meaningful looks. To quote journalist and fashion critic Angelo Flaccavento in Business of Fashion: “Difficult times can lead to outbursts of folie or a definitive affirmation of reason,” and designers chose the latter.

Nowhere was this more evident than at Gucci, where the bohemian flamboyance of the former creative director Alessandro Michele (who recently left the Florentine fashion house) was replaced by minimalist tailoring and patch denim. The intention was probably to “purify” or prepare the territory for those who would follow.

As the title “Let us talk about clothes” suggests, Raf Simons and Miuccia Prada wanted to talk about clothes. For their Prada men's autumn-winter 2023/24 collection, they worked on a range of conventional masculine garments - such as single-breasted blazers, bombers, parkas, and cardigans - with which they wanted to convey minimalism, comfort and warmth simultaneously.

The other feature, the “Prada flavour”, as Vogue’s Luke Leitch defined it in his coverage, sometimes reflected the brand’s permanent codes, such as the signature pointy collar.

Elegance and discretion of the ‘70s were the order of the day at Giorgio Armani. With austere shapes and a minimal colour palette, this collection was inspired by the Gothic architecture of Milan. For the finale, Mr Armani sent out five male-and-female couples holding hands, and it looked like a celebration of a “tradition” that still travels on two binaries. For his other catwalk line, the Emporio Armani aviator took off to give an overview of Milan’s masculine style. The collection’s theme was set with a series of looks featuring flowing faux fur-lined outerwear, jumpsuits, and suits in a combination of Prince of Wales and houndstooth patterns. Flight materials were tucked away in leather duffle bags, and models wore chunky ankle boots with attached purses. Overall, the show presented the endless possibilities of tailoring for a generation that has probably never thought about wearing it.

At Fendi, everything seemed like an ordinary dinner at home with friends, followed by Jackie O’ in Rome – the club Silvia Venturini Fendi would regularly go to in her youth. It was a collection to wear for protection, warmth and comfort. It also allowed one to be a nocturnal creature of the 1970s, with a liquefaction of the conventional masculine/feminine pattern.

In his first appearance for menswear at Etro, Marco De Vincenzo felt equally energetic and “domestic,” exploring the concept of “home” as the fashion house. For the occasion, Etro’s colossal textile warehouse in Como, Italy, was transported and installed in its entirety into a vast industrial space to become the show’s set, with samples hanging on wooden shelves and rolls of vintage fabrics. In doing so, Marco de Vincenzo wanted to pay homage to Etro’s textile heritage, inspiring his take on the label’s codes. He cut high-quality fabrics into soft, gentle shapes such as kimonos, shirt coats and flowing, unstructured and unlined duffle bags.

At Zegna, designer Alessandro Sartori also worked on the company’s materials and finishes. He presented a collection where the clean lines and lack of extra details reinforced textures, shapes, and emotions. 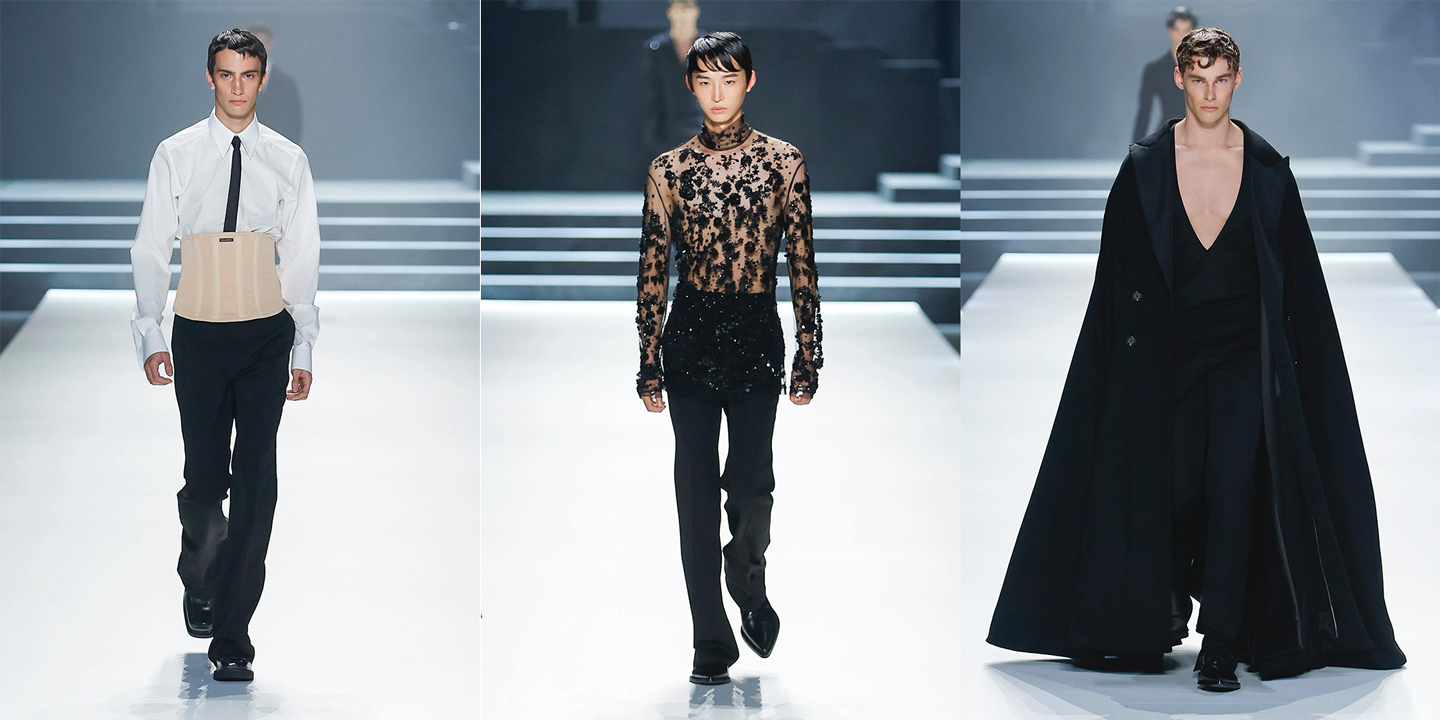 Dolce&Gabbana was back with their Sicilian widows, only this time in a masculine version. The collection, styled by the young and talented Simone Rutigliano, combined classic bustiers with shirts, tank tops, jackets, and trousers through a tailored cut, developing an essential, timeless and seductive wardrobe. While it’s true that masculine construction is usually applied to women’s jackets, they did the opposite, achieving a perfect fusion. 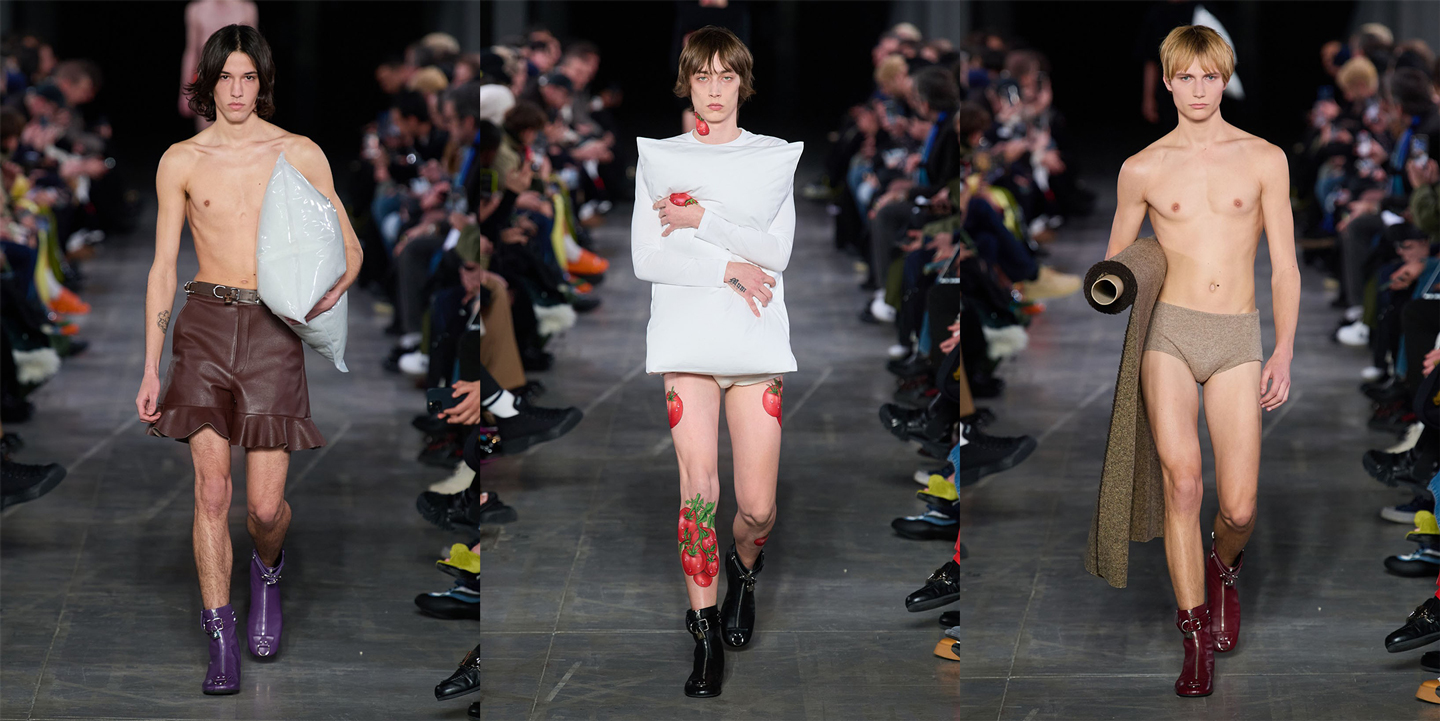 In a season of “reduction,” JW Anderson took the concept to the next level. For his namesake label, Loewe creative director Jonathan Anderson opened the show with a naked model holding a fabric roll. The following looks, worn by a non-binary cast, came with Wellipets’ frog-faced mules and boots, previously only available for children. The animals are a recurring feature of the British label and are no coincidence, as certain frogs can change gender depending on the circumstances. 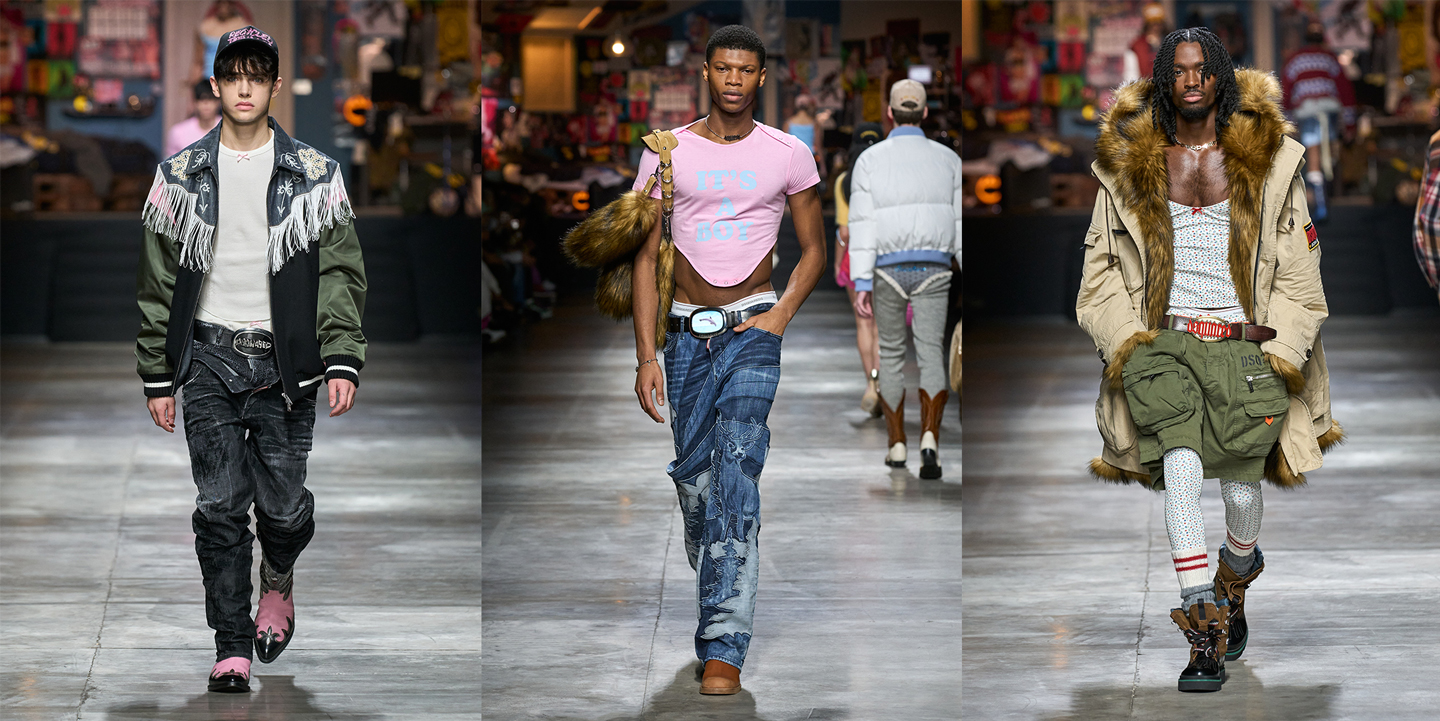 However, only some were feeling quiet and homely. There was a true “Teenage Madness” at Dsquared2. The collection returned to Toronto founders and designers Dean and Dan Caten’s roots to destroyed denim, cowboy leather jockstraps and logo-exposed boxers. 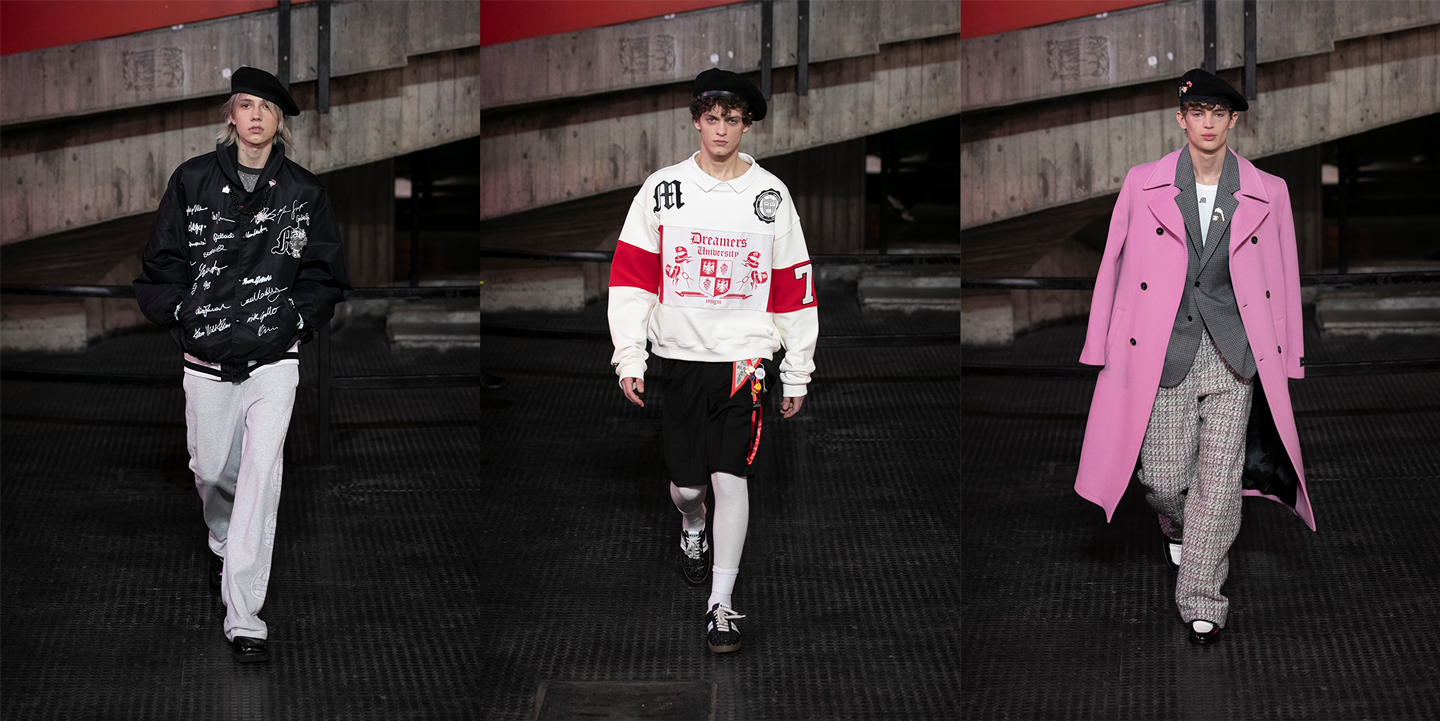 At MSGM, Massimo Giorgetti presented a rebellious take on school uniforms from Milan’s Politecnico University. An extraordinary soundtrack amplified the atmosphere with songs by CCCP, an Italian punk group from the 1980s whose strong, controversial lyrics influenced underground culture.

Fashion has been rethinking what a “man” should look like for years. It’s even gone so far as to question the meaning of hosting two different fashion shows, moving to mixed-gender catwalks instead. However, this fall-winter 2023/24 menswear in Milan didn’t reveal a tougher male image but a gentle blurring with smooth cuts, corsets, and crop tops. It presented the idea of a shared wardrobe; it just needs to be worn.