How Jacquemus is shaking up the fashion world

If we are talking about the most talented young designer of this century, we are pretty sure that Simon Porte Jacquemus will be on top of the list.

Founder and designer of Jacquemus, Simon Porte Jacquemus hails from the South of France and then moved to Paris when he was eighteen. We call him a self-taught designer because he had no fashion education, but he is now one of the most successful designers in the fashion industry.

The inspiration for the Jacquemus fashion label comes from his mother’s maiden name, Valérie. Sadly, she passed away in a car accident when Simon Porte Jacquemus was as young as 19. She is an eternal inspiration because she gave him enormous strength and a big smile.

After losing his beloved mother, he said to himself: “OK, from now on, I just have to do what I want.” Realising that life is too unpredictable, he felt the need to quickly make his dreams come true. That is why he decided to launch his brand immediately in 2009.

Back to 2009: The beginning of Jacquemus’ fashion history

Fashion history was made after Simon Porte Jacquemus first released the first collection of his namesake brand in 2009. Two years later, his garments caught the attention of Rei Kawabuko and Adrian Joffe, the founder and creative genius and the president and CEO of Comme des Garçons respectively.

He was later offered a job as a sales assistant at Comme des Garçons in Paris, so he could support himself financially while making his designs to be shown during Paris Fashion Week in 2012.

Jacquemus has often described his collections as ‘naive, raw and smiley’. When he was young, he was obsessed with French movies, so he would always start writing the film script and imagine the girls in the stories before creating his looks.

Many of Jacquemus’ collections continue to be inspired by the designer’s childhood memories, holidays and his mother. It’s all about memories that Simon Porte Jacquemus pays homage to through geometric designs and evocative fabrics conveying a sense of freedom as if the models on the catwalk were ideally swimming in the sea or basking in the sun, joyful and innocent.

The brand’s styles are minimalist, asymmetrical, surrealist and effortless. Jacquemus apparel was initially conceived to dress a woman gaining self-confidence through her clothes, thus enhancing her uniqueness.

After a series of heartfelt womenswear-only collections, often described as ‘biographies’, Simon Porte Jacquemus decided to debut his first menswear collection by staging a spring-summer 2019 show at the Calanque de Sormiou between Marseille and Cassis in June 2018. True to the Jacquemus tradition of naming the designer’s collections, like the previous “La Piscine”, “La Bomba”, and “Le Souk” seasons, the brand’s first men’s collection was called “Le Gadjo,” which roughly translates to “the gipsy.”

The best collection to mention to enhance the brand’s style and history is the 10th-anniversary spring-summer 2020 show in 2019, known as “Le Coup De Soleil” or “the sunburn” in English. 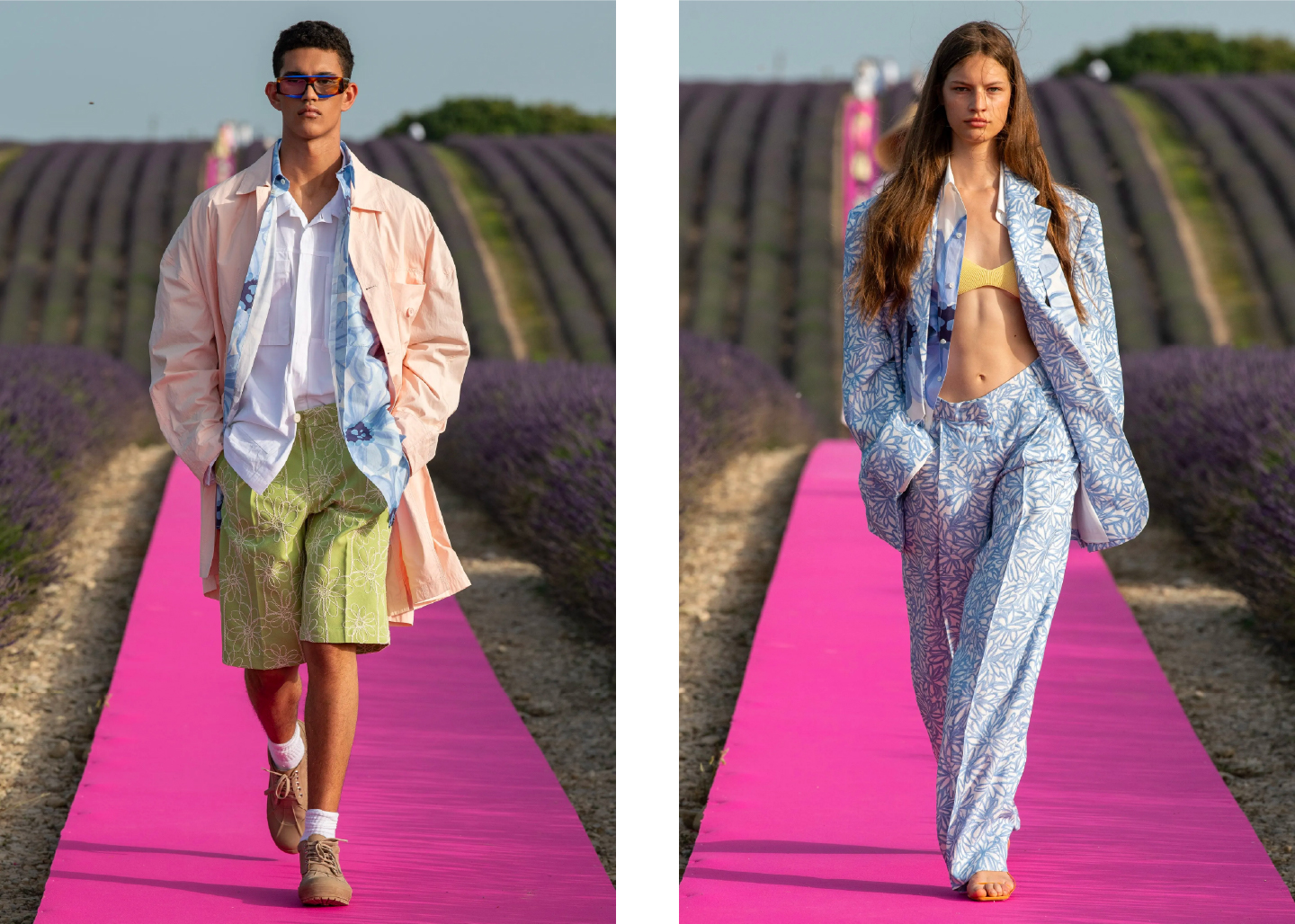 The runway show was in Valensole, a few miles from Simon Porte Jacquemus’ childhood home. The fashion show, surrounded by lavender flowers, created a surreal scene for a fashion moment that is still unforgettable today.

Taking inspiration from all the women, people and artists who inspired him to reach the highest point, the key muses for Simon Porte Jacquemus were Hockey, Christo and Jeanne-Claud. The 10-year-anniversary collection took us back to the springtime of his life, as seen in his designs’ colours and prints.

Back to the Ville Lumière: When Jacquemus wasn’t touring the country with shows, the brand was rocking at Paris Fashion Week

Let’s look at another collection that more closely reflects the personal history of Simon Porte Jacquemus: L’Année 97, standing for The Year 1997 and referring to the co-ed autumn-winter collection 2020/21.

The year 1997 is not just any ordinary year, but the time the designer first created a skirt for his mother at the age of 7. The starting point for this collection was that Jacquemus was worried about himself, so he started to question things: are people really in need of fashion? Is all this useful?

These doubts came to him for the first time in his career, so he presented outfits that could be sophisticated yet minimal.

Each piece in this collection still best represents the brand’s identity, consisting of a typical hot girl and a hype boy, but everyone looks sexy. Below, we selected the most recognisable looks from L’Année 97 collection to enhance Simon Porte Jacquemus’ signature style.

The look on the left was the focus of this collection’s theme and inspiration. French supermodel and actress Laetitia Casta wore the skirt Simon Porte Jacquemus created for his beloved mother, a long linen pencil skirt paired with an off-shoulder knit bandeau and a dark beige best-seller bag called Le Bambino.

The look in the middle is outstanding to show the country-boy aesthetic, as the model wore a yellow vest, loose-fitting shirt and cargo trousers. Last but not least, the look on the right presents an innovative but minimalist businesswoman wearing an oversised blazer, asymmetric dress and high boots. The model also went with a bandana and a belted bag by Jacquemus to reveal this look’s charismatic, chic appeal.

The most popular mini-bags on the shelves of one-off boutiques and the decade’s larger-than-life celebrities as the brand’s biggest fans sitting front row at shows: Here are the Jacquemus stand-out moments

Up to this paragraph, some readers might be curious to know what else this self-taught designer from Provence does. Moving on to iconic products, he is the one who created the mini-bag phenomenon after launching the Le Chiquito bag in the spring-summer 2018 collection.

Le Chiquito is a small bag made of leather and suede, with long curved handles and a golden Jacquemus logo. Once it became a must-have for its unique design, many celebrities have fallen in love with this bag, such as Rihanna, Dua Lipa, Bella Hadid and Beyoncé.

Moreover, he is courageous and sympathetic. The 32-year-old designer fights alongside the LGBTQ+ communities to make people better understand the value of inclusivity in all its forms, including different body types, skin types and ages.

Among his many initiatives, he launched his “Le Splash” campaign for spring-summer 2021 during Pride month.