What does Metafashion stand for? Viktor&Rolf!

When you are born in the land where Là, tout n’est qu’ordre et beauté, Luxe, calme et volupté*, we guess you may want somehow to break this harmony, inventing your own (balanced) chaos.

In this spirit, the Dutch design duo Viktor&Rolf might have found the inception, back in 1993, from their picturesque Amsterdam to start an aesthetic alphabet in the form of über fashion.

Then Viktor Horsting and Rolf Snoeren challenged the preconceptions of fashion and used their Haute Couture catwalk as a stage for their performance art, bringing awe, beauty and fantasy for almost three decades. Next year will mark their 30th anniversary.

So, these internationally renowned fashion icons launched a retrospective —titled “Viktor&Rolf: MetaFashion!”— at Shenzhen’s Sea World Culture and Arts Center in collaboration with the city’s Design Society a few weeks ago. 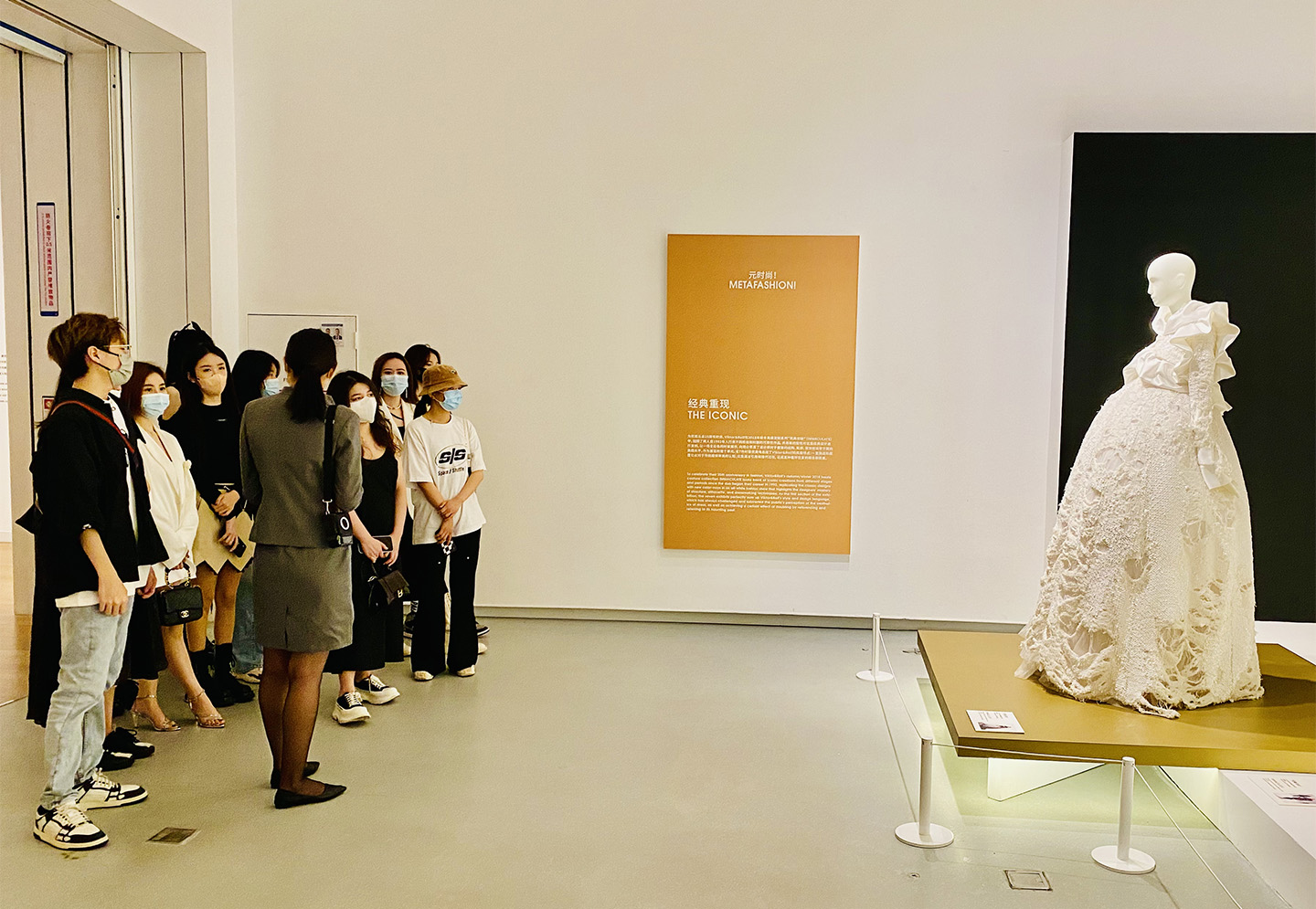 On show until October 8, the exhibition was curated by Pooky Lee and designed by Nathalie Crinière. It celebrates the meticulous craftsmanship and inspiring creativity behind Viktor&Rolf’s career with nearly 80 looks from the brand’s Haute Couture collections. It includes photographs by Arthur Elgort, Greg Kadel, Chen Man and Ellen von Unwerth and 24 sets of miniature fashion dolls wearing iconic V&R pieces.

Find out our highlights from “Viktor&Rolf: MetaFashion!”

That's the sudden feeling that rushes into you on admiring Viktor&Rolf’s creation. 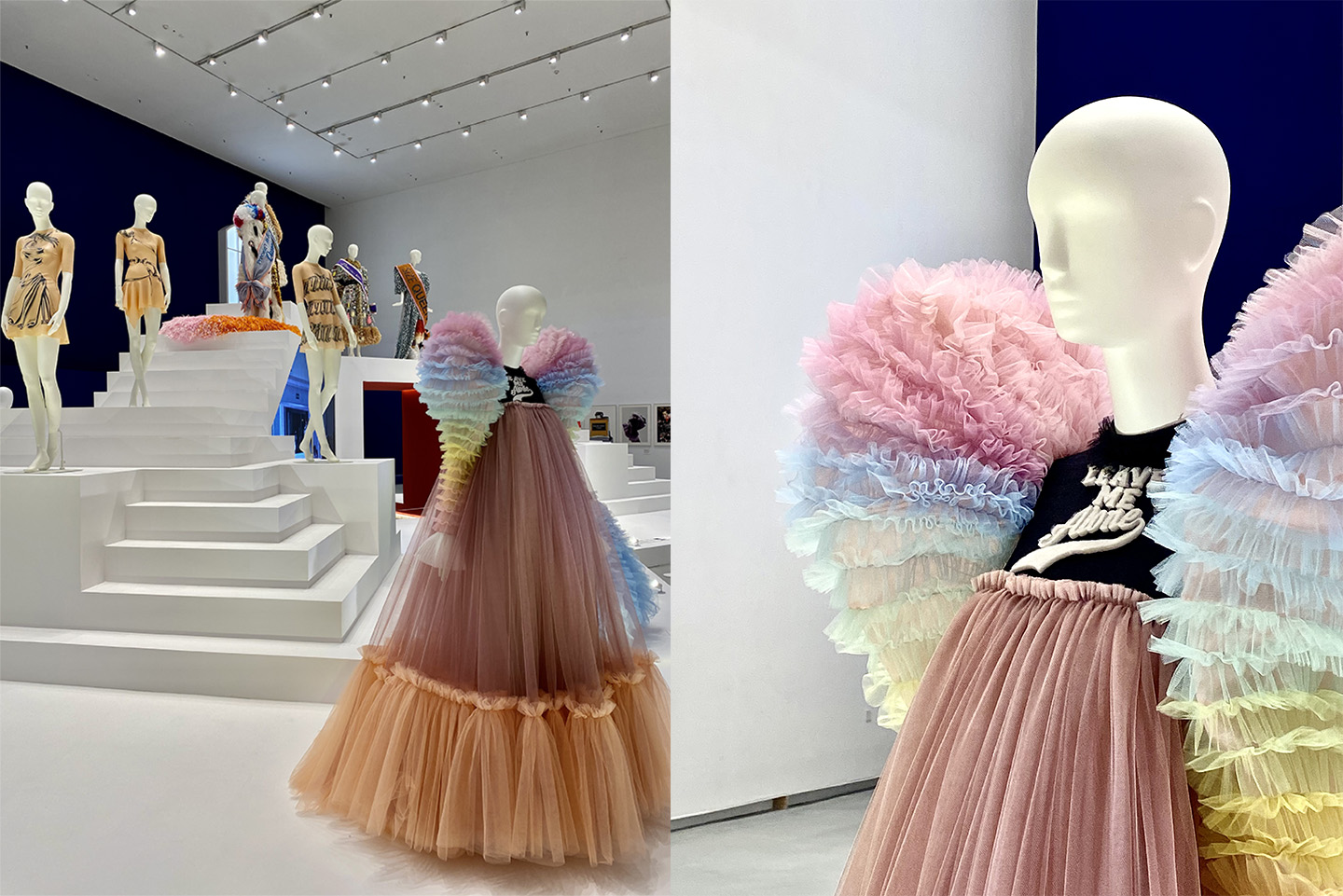 As the vibrant materialism and unsurpassed technical skills of Dutch Masters, such as their ancestor Johannes Vermeer, V&R are no less talented. Exquisite artistry tells stories of brilliantly executed research, unlimited sampling, testing and experimenting.

Take effortlessly tailored silhouettes, the unseen, the wonder, the surprise of magnificent fabric manipulations and materials selection, and there you have it: the magic of dressmaking.

An occasional nudge of bizarre lunacy is needed to keep fashion awake. That’s what we expect from V&R. Many events throughout their presentations embodied their mania into a complex jigsaw of codes. Is fashion art? And here we go with the FW15 Haute Couture Wearable Art series, where you can actually wear your living room paintings (Chalayan you are in our hearts). Or why not go to work wrapped in your bedsheets (pandemic mood on)? The unforgettable FW05 show, with sleepwalking models numbly entering Tori Amos’ live performance, was the sweetest lullaby of the season.

The superb, otherworldly actress was the muse for V&R 10th anniversary FW03 RTW, where she appeared as a goddess of style in the finale. 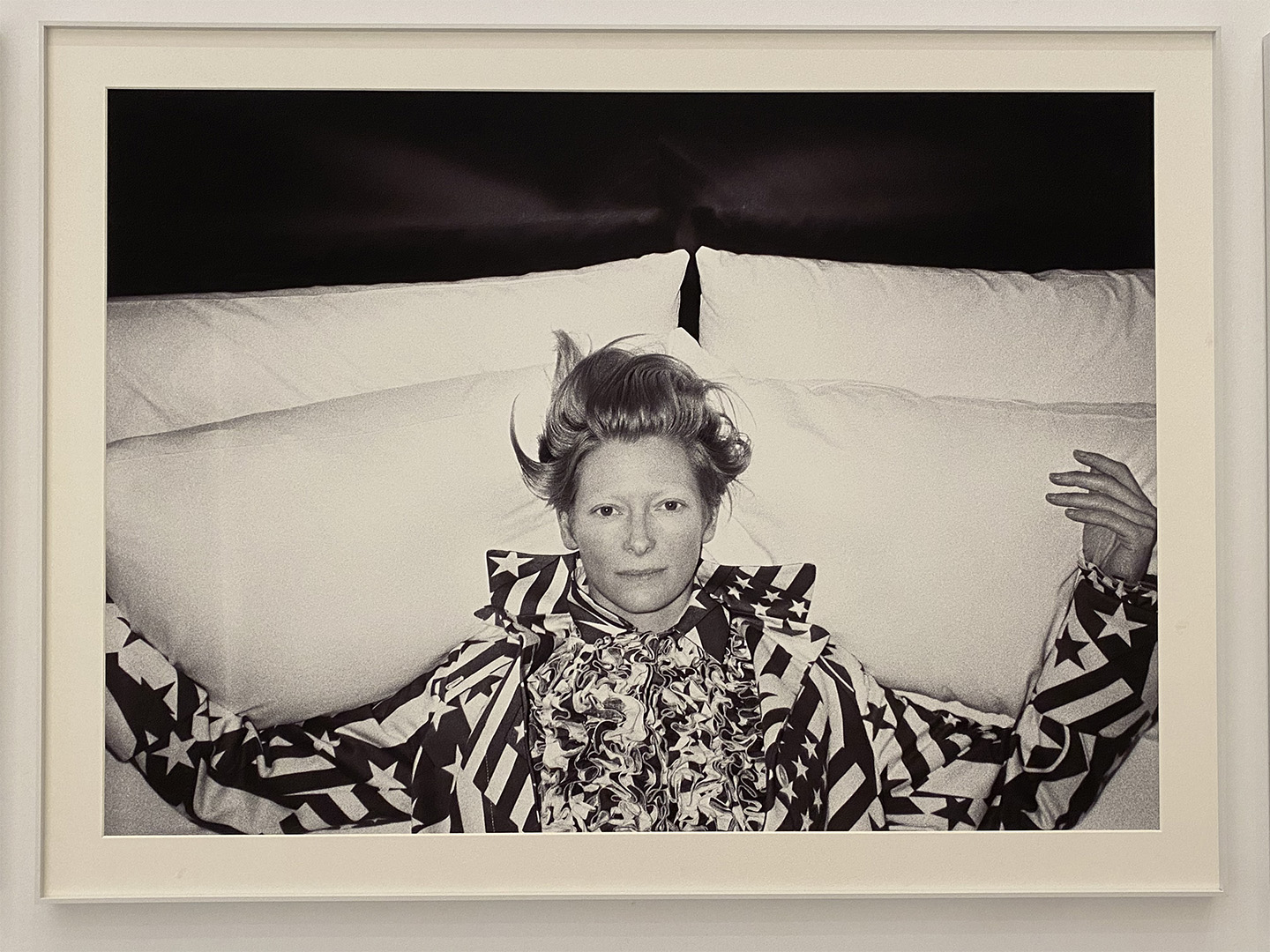 A troupe of Tilda Swinton’s copper-haired clones with milk-pale complexion marched the stage, culminating into an outfit made with five shirt collars peeling back, one atop the other, that we can admire on display.

Some of the most iconic looks from the FW18 Haute Couture The Immaculate Collection, the 25th anniversary, all duplicated in white: from the FW98 Atomic Bomb and FW99 Russian Nesting Doll to the SS10 Credit Crunch, the tulle ball hole gown, which Katy Perry made pop on the 2009 MTV EMA’s stage, and several other incredible ones. 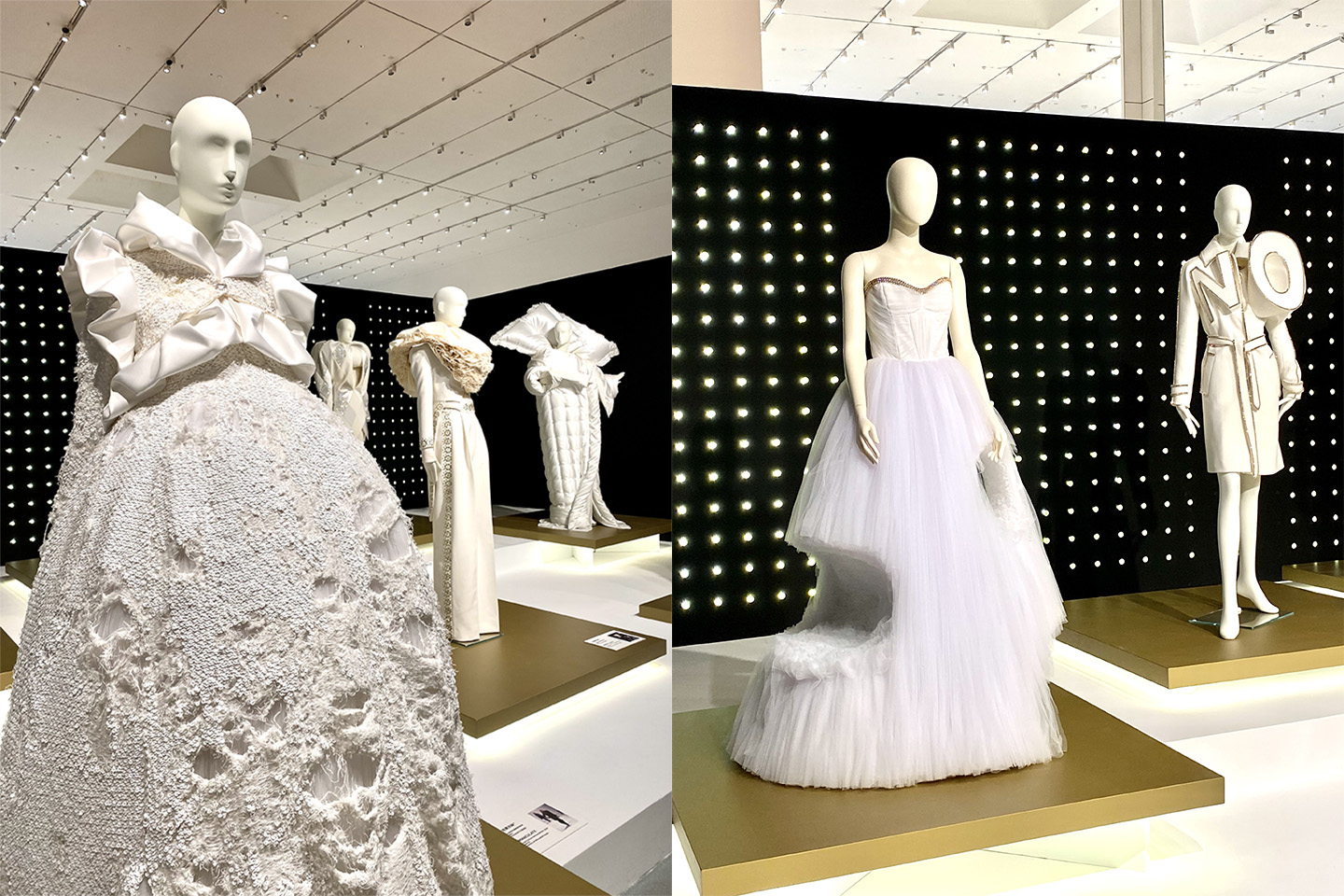 The epitome of every designer’s childhood, a doll dressed in dreams. Because when you feel the urge to drape, pin, wrap, and only unless you have a restless sibling to play with, a doll becomes your muse, the ally in your secret imaginary life, where you are the best couturier in teddy bear’s land (watch me Barbie dearest).

In my early years, I personally made red carpet gowns out of printed cotton sacks, as my grandma taught me (in memory of her rural war time). The first time V&R exhibited them was for The House of Viktor&Rolf, held in 2008 at the Barbican, London, where I was mesmerised by a flawless ceramic glam army. 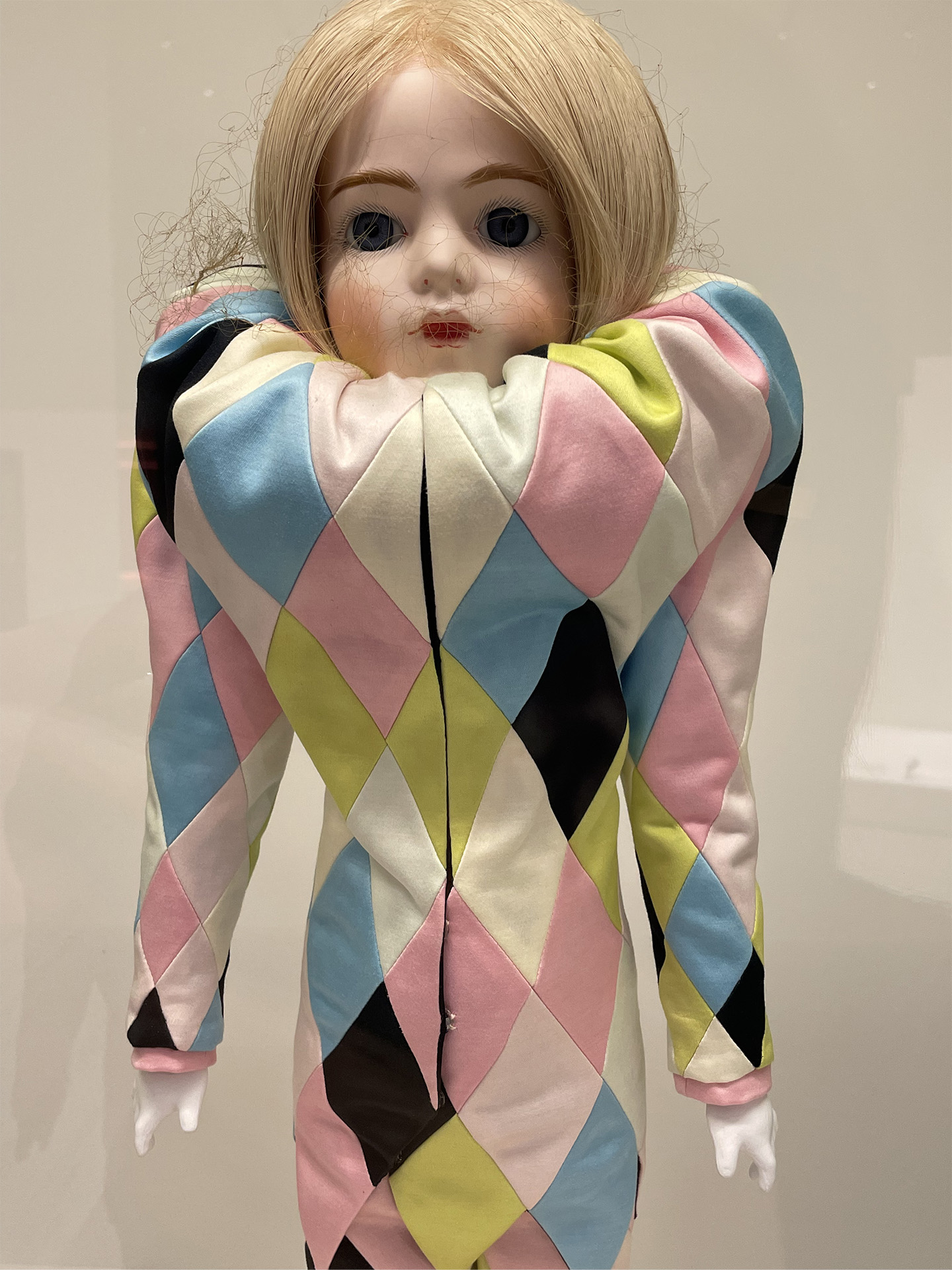 Prepare to be astonished by SS15 Van Gogh Girls, FW16/17 Vagabonds, SS19 Fashion Statements, FW21/22 The New Royals. In his review for Artforum 1995, Oliver Zahm wrote: “The fashion of Viktor & Rolf, or better meta fashion, is the equivalent of a conceptual exercise in reconstruction”, so that’s where the idea of the title comes from, and it’s quite accurate! Enjoy the show!