The art of Chinese shopping: A super-place

Like any free spirit and fashion enthusiast living in Beijing, I am here to breathe its hip and international vibe. I stroll around the sharp polygons of its facades. I walk its labyrinthine paths, where the bold use of colour and irregular modelling create a unique perspective at every turn. I go to its upscale restaurants and bars.

Completed in 2008, Taikoo Li Sanlitun (三里屯太古里) has established itself, for over a decade, as the capital’s fashion centre, supplanting all other places. 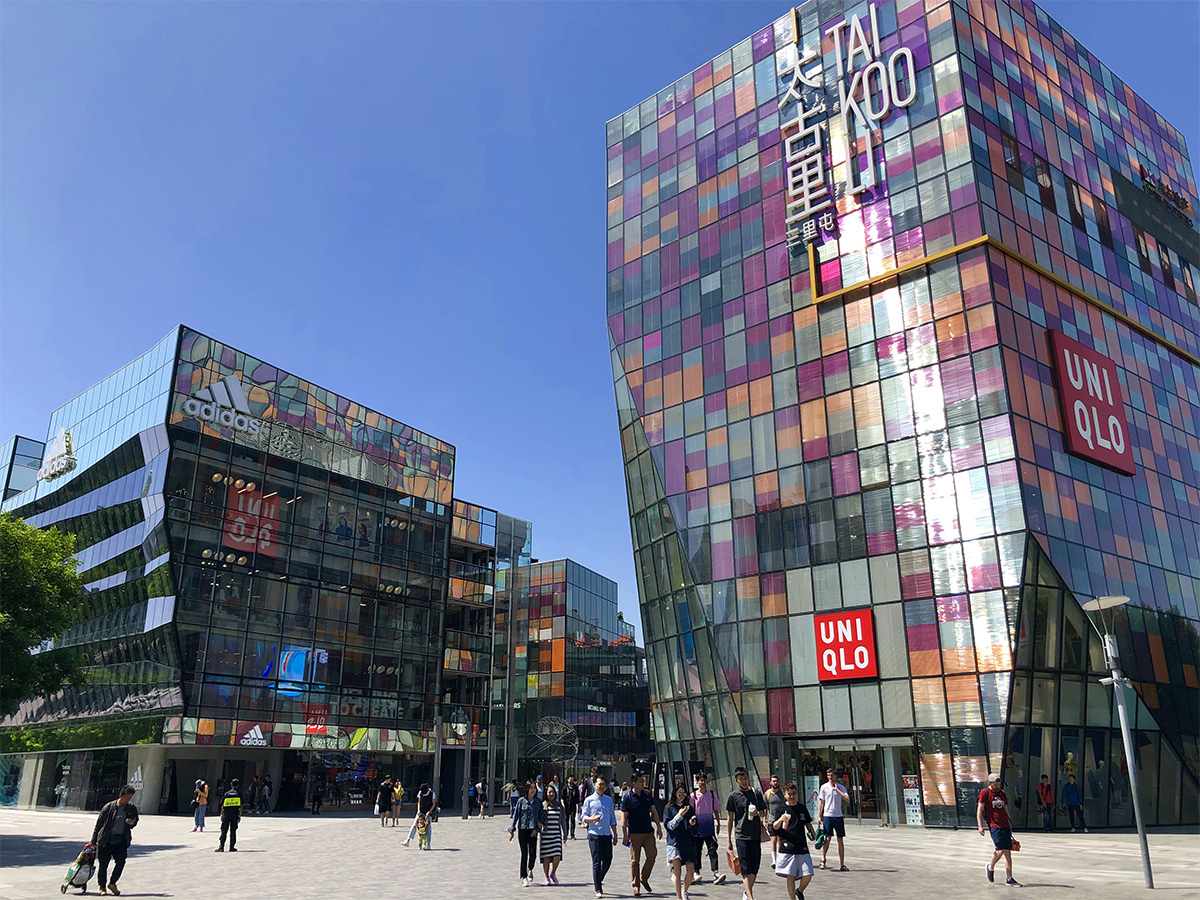 Featuring an open-plan lane-driven design, Taikoo Li Sanlitun, in the heart of Beijing’s Chaoyang District, is a complex comprising retail space and a boutique hotel – The Opposite House. It is home to approximately 300 shops and restaurants, including flagship stores, lifestyle brands, independent design labels, high street fashion and a wide range of regional and international cuisine. It also features an eight-screen cinema and The Red, a multipurpose event venue.

Standing out from the anonymous office towers and the dormitory suburbs, Taikoo Li offers the city what the sociologist Ray Oldenburg has defined as “third place”: a space dedicated neither to work nor to the trivial matters of daily life but for hanging out, experiencing new things, and having fun.

“This is no doubt the capital’s hottest fashion destination and the coolest place to hang out,” Taikoo Li Sanlitun’s website states. “Not only is this a place to shop to your heart’s desire, satisfy your appetites, and play; it’s also on the cutting edge of fashion. Think of us as the city’s high-profile calling card.”

After exploring The Roof lifestyle hub in Shanghai and Beijing’s Parkview Green, in this episode, I will address a fundamental question in the sociology of fashion by introducing Taikoo Li. I will describe the characteristics that make it possible to transform commercial space into the driving force of new trends, establishing itself as a city’s centre of gravity.

Is Beijing’s fashion destination Taikoo Li Sanlitun shopping centre a Super-Place? It is, since a Super-Place has a magnetic appeal and is a generator of new trends

Beijing is a post-modern city characterised by significant spatial fractures and alternating solids and voids. It has a polycentric structure: attractions are scattered across various concentric motorway rings designed to facilitate travel by car.

The city’s charm lies in the mix and match, the contrasts rather than the harmony of places.

Generally, modern shopping centres coagulate around a neighbourhood and reflect its sociological peculiarities and the needs of the people there.

In this jagged situation, Taikoo Li Sanlitun has a unique magnetic appeal for young people and anyone who wants to escape the city’s stressful routine.

The primary feature of this shopping village is its location. It is near the third ring road, not far from the CBD, in the Sanlitun district: the area of foreign embassies, up-end restaurants, and nightlife. This area is mainly frequented by the international community and the wealthy Beijinger, becoming the synecdoche of the capital’s “Dolce vita”.

Taikoo Li Sanlitun’s second strength is structural. The typical Beijing shopping malls appear as high-rise fortresses, surrounded by parking lots or highways, guarded day and night, and sealed off from the outside world.

The peculiarity of Taikoo Li is that it is an open village. The multi-coloured faceted prisms alternate in forming an irregular path. It is easily accessible from the street and leads to internal squares that have become a real hub for youngsters.

The structure of Taikoo Li Sanlitun and the interaction between its commercial spaces, the “syntax” of retailing, is a decisive element compared to its “lexicon,” i.e., the specific characteristics of the individual brands and stores.

With cinemas, a hotel, coffee shops and some luxury lounge bars, the village is divided into two parts. The southern part is dominated by the sportswear and athleisure brands so popular among Beijing students and young employees: from Adidas to Uniqlo, Champion and Nike.

The driving force of the cosmopolitan lifestyle, Taikoo Li Sanlitun is more than just a sum of the shops and businesses that make it up. A stroll through its streets is enough to understand the power of fashion and the impact of shopping environments in today’s society. 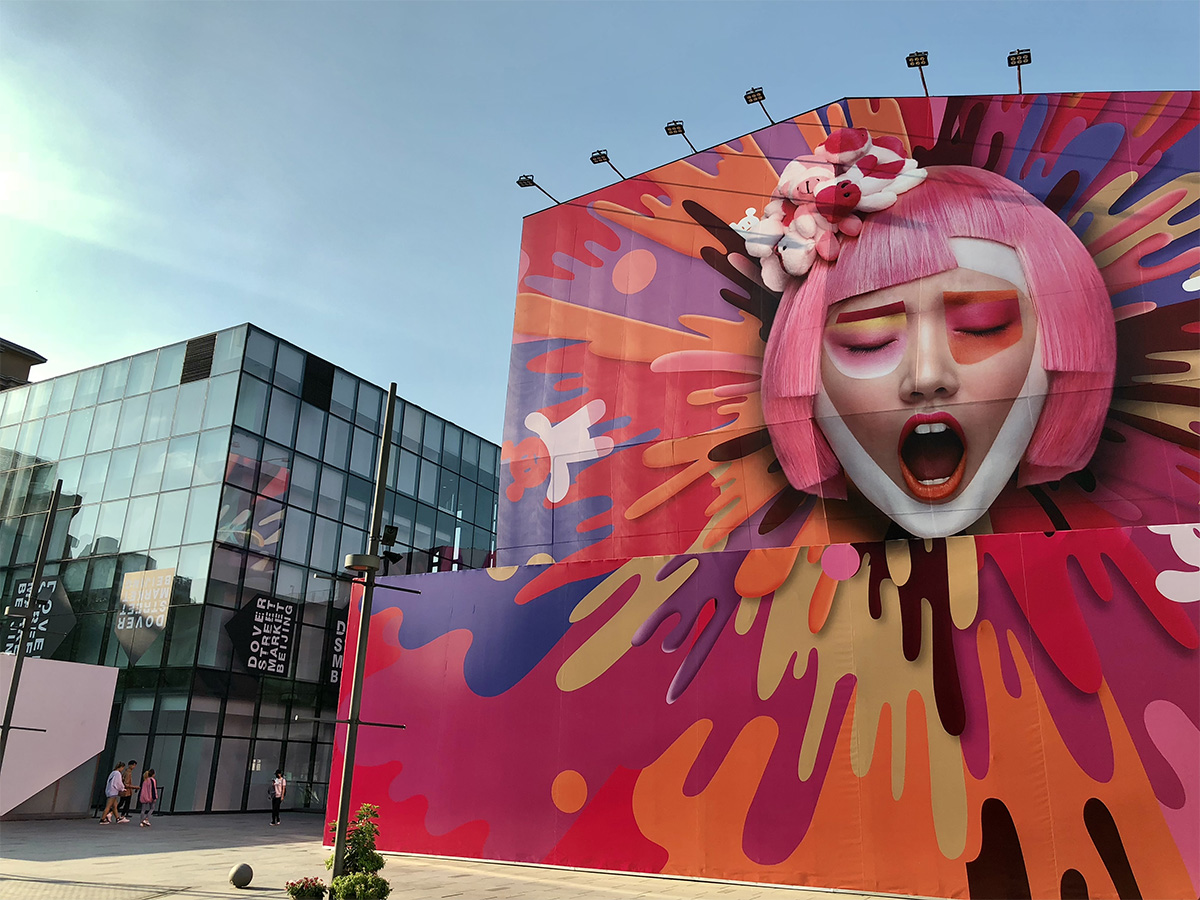 In the post-pandemic scenario, with its travel restrictions and retail apocalypse, Taikoo Li Sanlitun has carved out a unique role, establishing itself as a “Super-Place.” Its physical dimension indeed offers an experience that cannot be replicated online. The ingenious architecture of this shopping environment tends not to crush but to emphasise the individual, becoming the ideal scenic spot for people watching and showing off.

Some corners of the village have become the favourite selfie spot of Beijing’s influencers, literary turning the street into a catwalk. The central square of the southern part of Taikooli, in particular, in front of the Apple store building and the Ralph Laurent flagship store, is permanently besieged by a group of photographers: real paparazzi sneaking photos of stars and beautiful passers-by.