Who's the Best Designer of the Year? Francesco Imberti

As the latest Milan Fashion Week kicked off, Istituto Marangoni Milano presented Turn Up, a fashion show celebrating the best ten fashion designers selected from the 2021/22 academic year graduates. I had the opportunity to look closely at the stunning garments presented at The Theatre in Lino Bo Bardi square, and I was overwhelmed by the work of Francesco Imberti, winner of the “Best designer of the Year 2022” award. 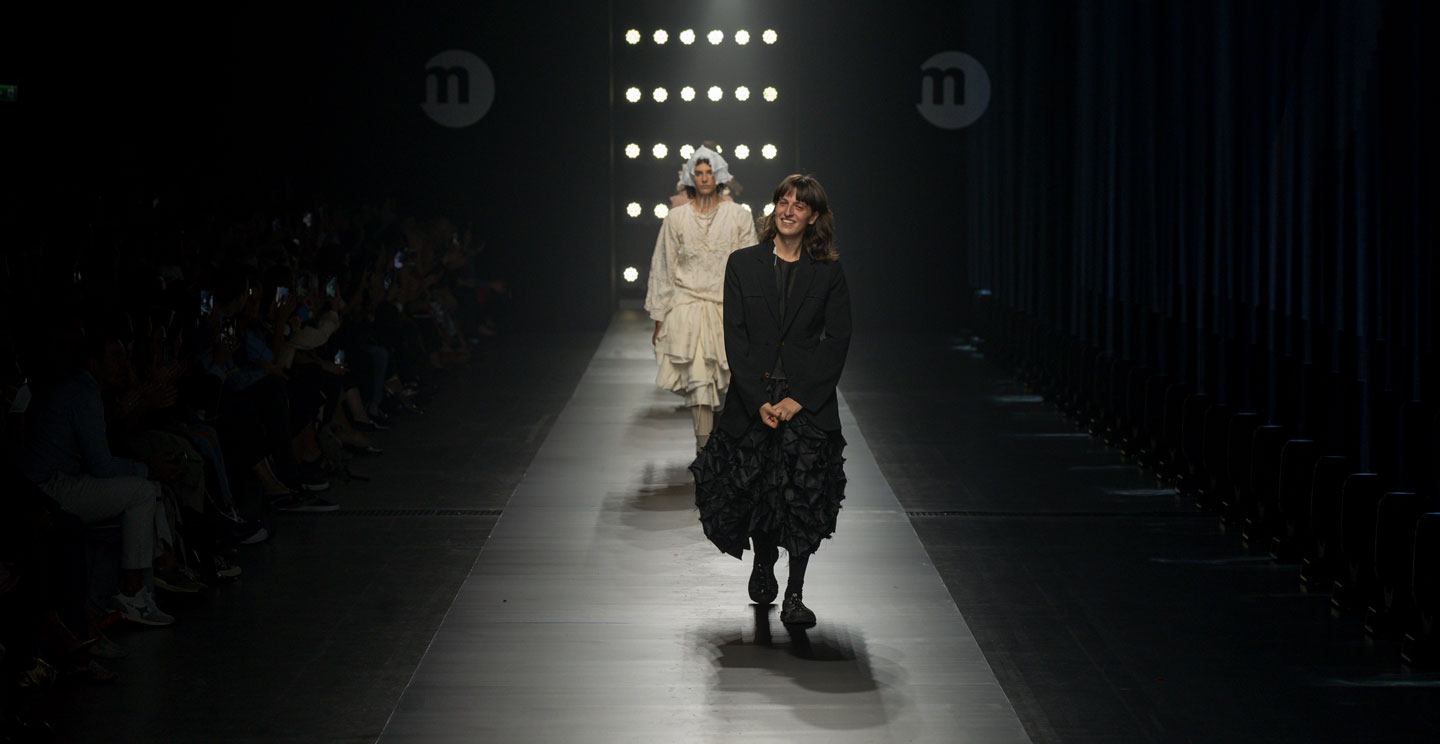 “I have always had a passion for the ephemeral and art. Not just a strong image, fashion has a political dimension and represents my need to express myself,” said the young designer, born in 2000 in Parre, a small village in the Bergamo area. A few days after the event marked his professional debut in the fashion arena, I was given the golden opportunity to delve deeper with Francesco and chat about his past, roots and plans. 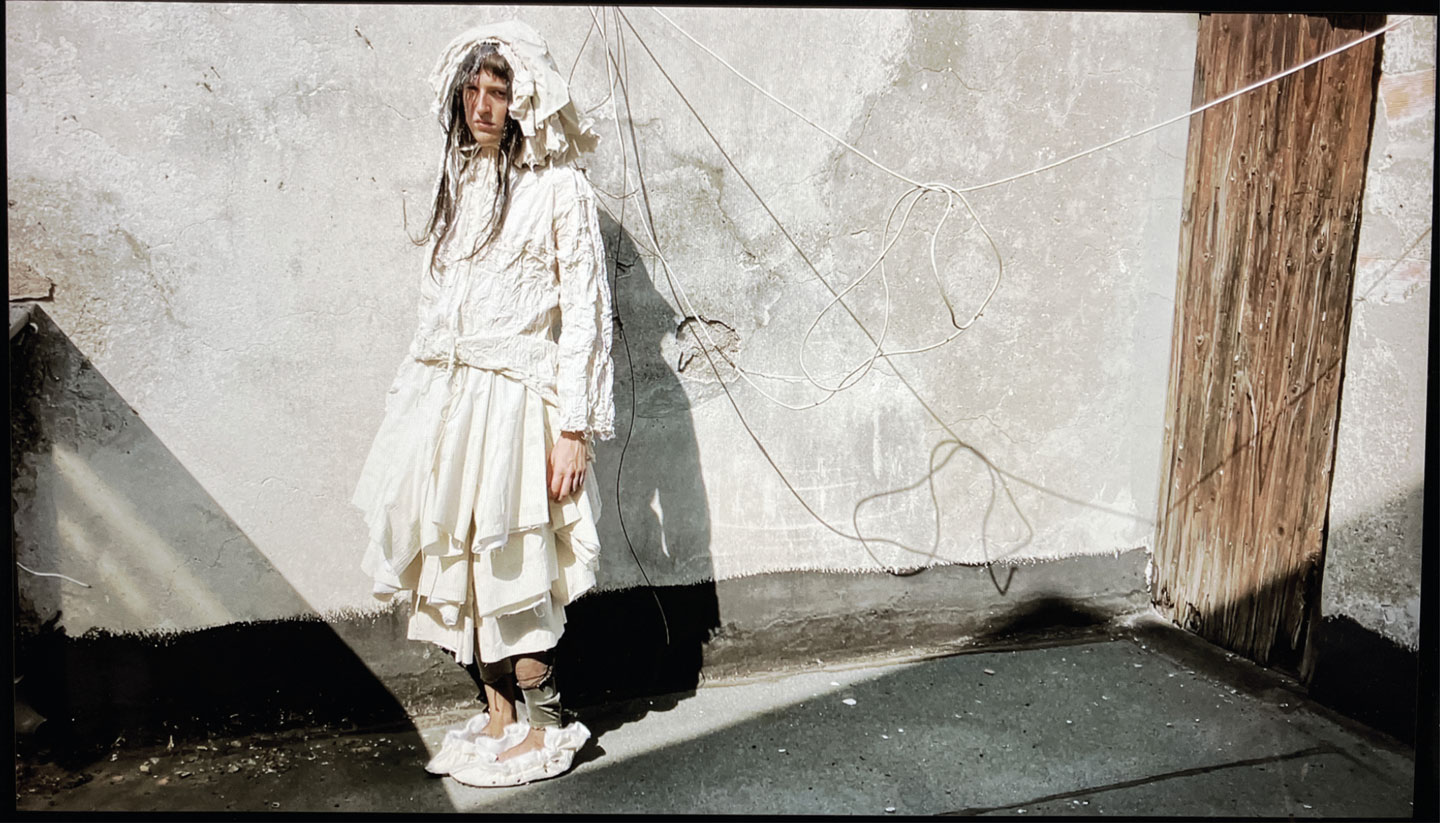 You were shortlisted by a jury of fashion insiders, who allowed you to present your work during the latest Istituto Marangoni Milano fashion show. Did they give you any advice?
During the pre-show round, they were very interested in how I created all my garments, asking me about my pattern-making techniques and the paper dress. Right after the runway, I was advised to continue my studies and gain experience, something I had already planned to do as part of my career. I don’t feel I have enough technical knowledge yet, so I will try to delve into the pattern-making part of my job.

Then the day of the Istituto Marangoni Milano fashion show arrived. What if you had to describe your emotions from that day in just three words?
I was a little dazed by the hype, but I knew I had put my all into it, so I also felt proud.

We enjoyed your dazzling creations hitting the catwalk, but what happened backstage?
Well, the line-up was changed at the very last moment, less than two hours before the show. I was sure that the statement piece in my collection was the paper dress I created just for the show, which then ended up in the middle of the line-up, leaving a look consisting of a pair of shorts to close the défilé. So except for this, Istituto Marangoni was very professional and perfect in planning the event, providing everyone with teams of casting directors, make-up and hair stylists, including some assistants, and giving us plenty of time to get ready. There was also time for journalists’ interviews. 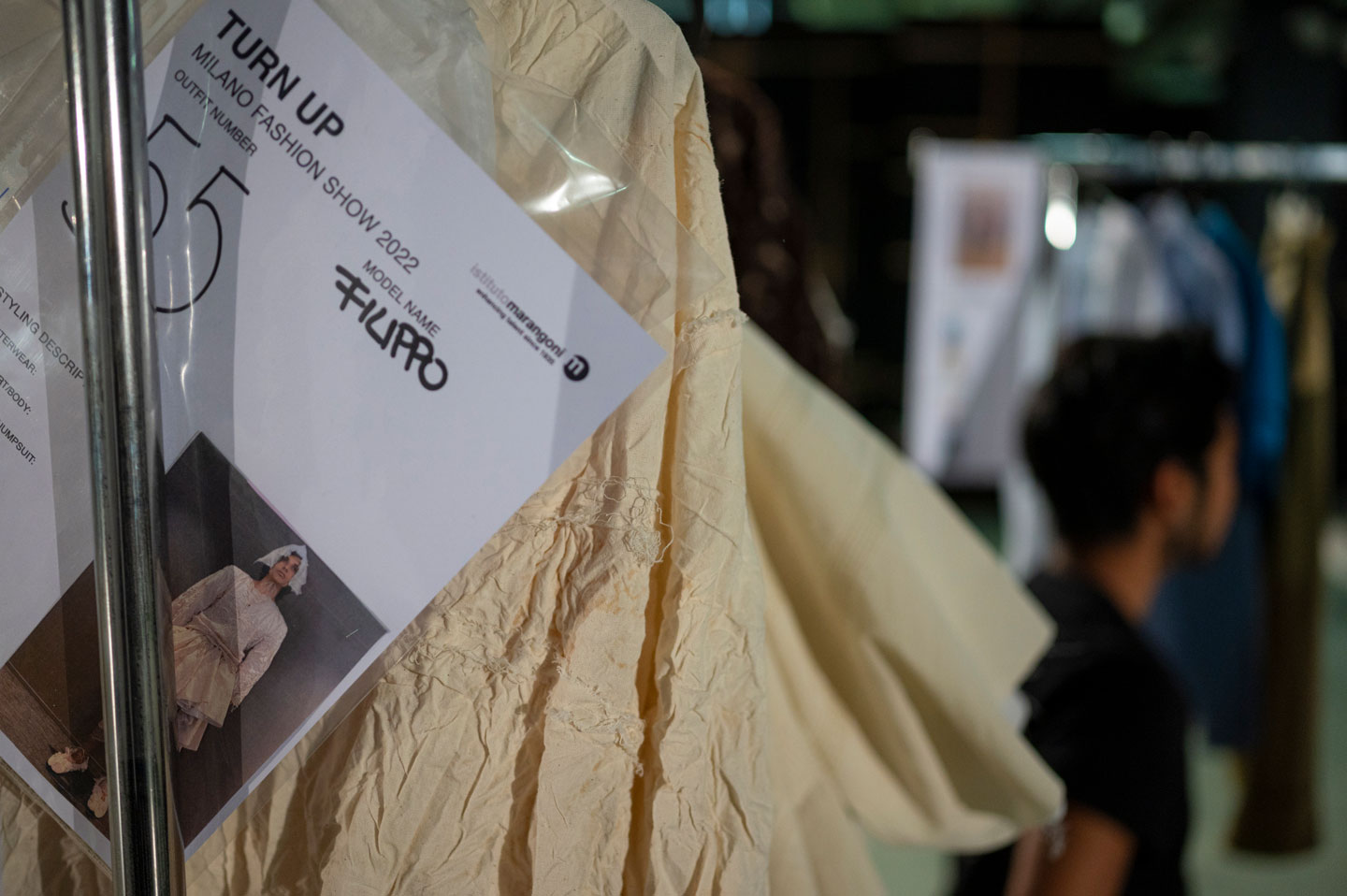 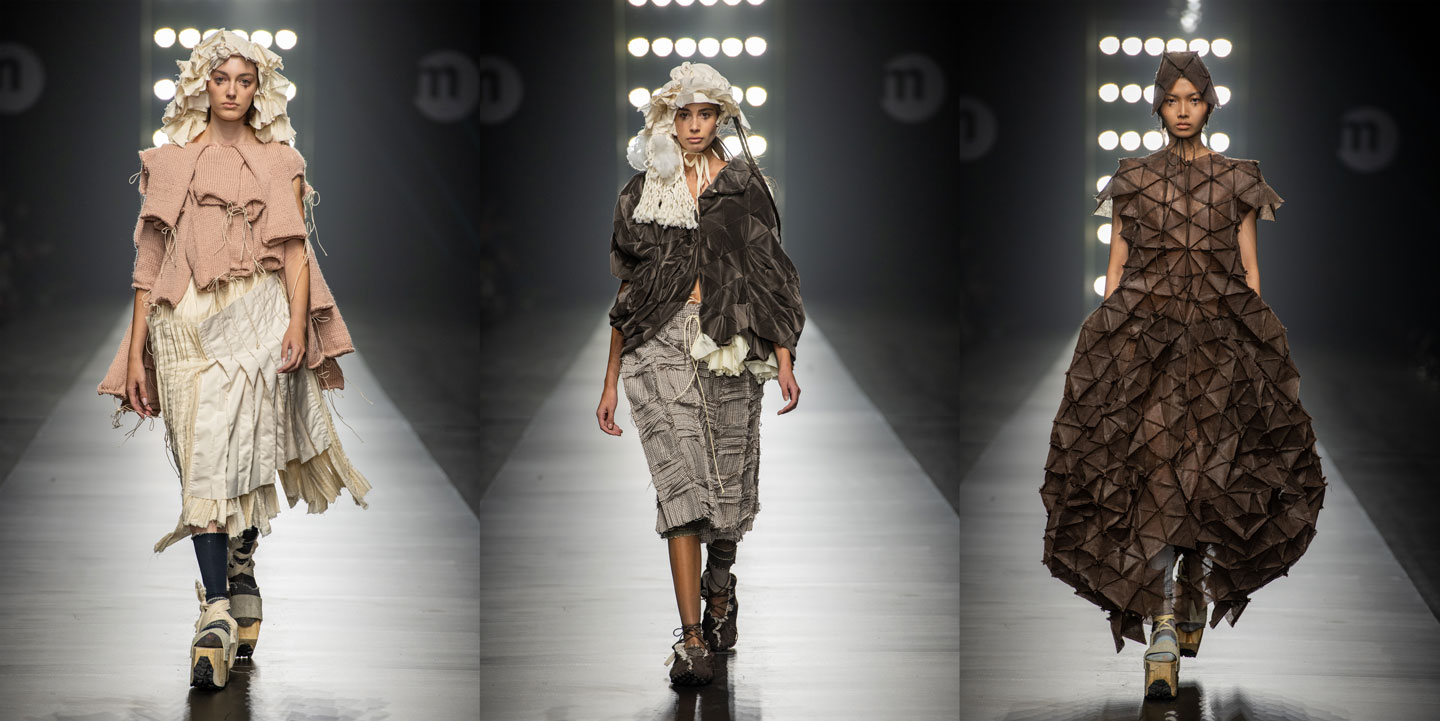 Do you enjoy sharing stories about yourself and your creations with the media?
While I don’t consider myself a great communicator, I appreciated the buyers and journalists who asked us questions about our collections. After a whole year of hard work, I felt it was natural to talk about my values and the messages I would like to convey through my garments.

How did you come up with the concept behind this collection?
This concept arose from my need to express something from my past that I had never been able to sort out fully. I was inspired by artists such as Bruce Nauman, Louise Bourgeois, Carol Rama and Sarah Lucas. Then I put them in an ideal relationship with the seventeenth-century pastoral costume typical of Parre, my home village in the Bergamo area. What resulted was a desexualised, decontextualised and somewhat very political dialogue. My challenge was to create garments that would not constrain anyone’s sexuality and physicality by being agender and without pre-set sizes. This included research into shapes and their historical symbolism, relating to the rise of an imposed binarism that spread over the years. Considering the times we live in – times filled with hate and fear – I feel this message is more relevant than ever and, of course, a structural basis for my creativity. Although I studied art, I gradually realised that fashion is the most proper and direct medium to express my messages: art can only be appreciated through learning and study. In contrast, fashion is less elitist and can be understood and felt while walking down the street. 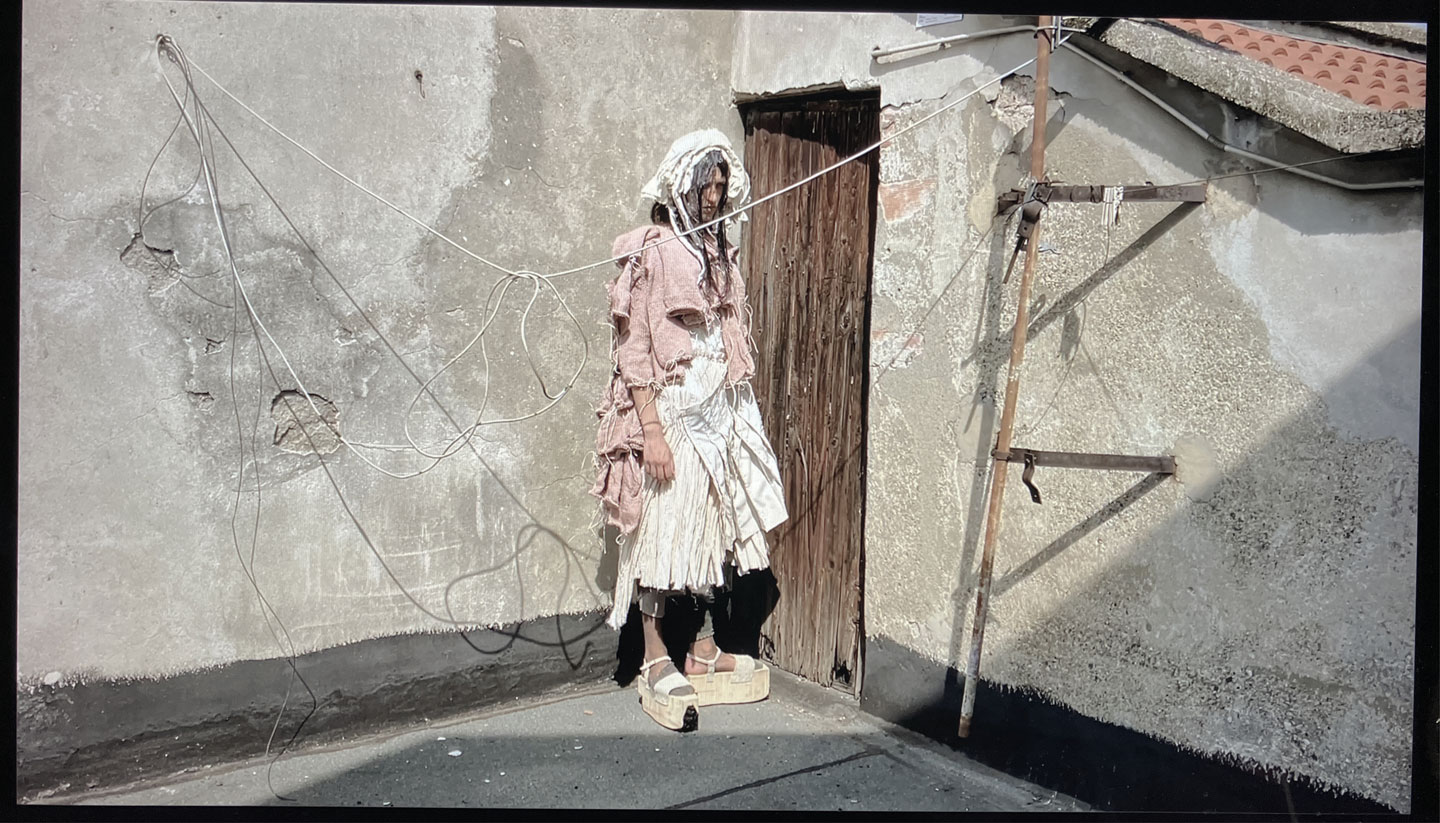 What springs to your mind when thinking about the creative journey that led to your graduate collection?
I will always cherish the days spent in the workroom practising with the sewing machine. My process is almost always as follows: I spend three days of hell looking for ideas and keep trying, and then get to a result or concept from which I start to create my garment.

Speaking about memories, what is your first fashion memory?
Definitely not my first fashion memory, but one of the moments that blew my mind was when I discovered the work of Rei Kawakubo at Comme des Garçons and Martin Margiela. It was overwhelming to realise how these two thought leaders were visionary enough to create garments in the 2000s that still look more than modern today. Then I can mention Professor Castiglioni’s lectures on contemporary art. I felt that he had wholly transferred his passion and dedication to me. I started to be inspired not only by fashion but by everything else.

Who was the first person that believed in you as a designer?
It is not a matter of who believed in me first or did it later, but actually, there is a special person who has always pushed me. She is a contemporary artist, and I used to be her assistant. Instead of asking to see my clothes, she always wanted me to talk to her about them. When she came to attend the show, it was an enormous satisfaction; she had already guessed what my looks were even before the speaker announced the designer who created them. 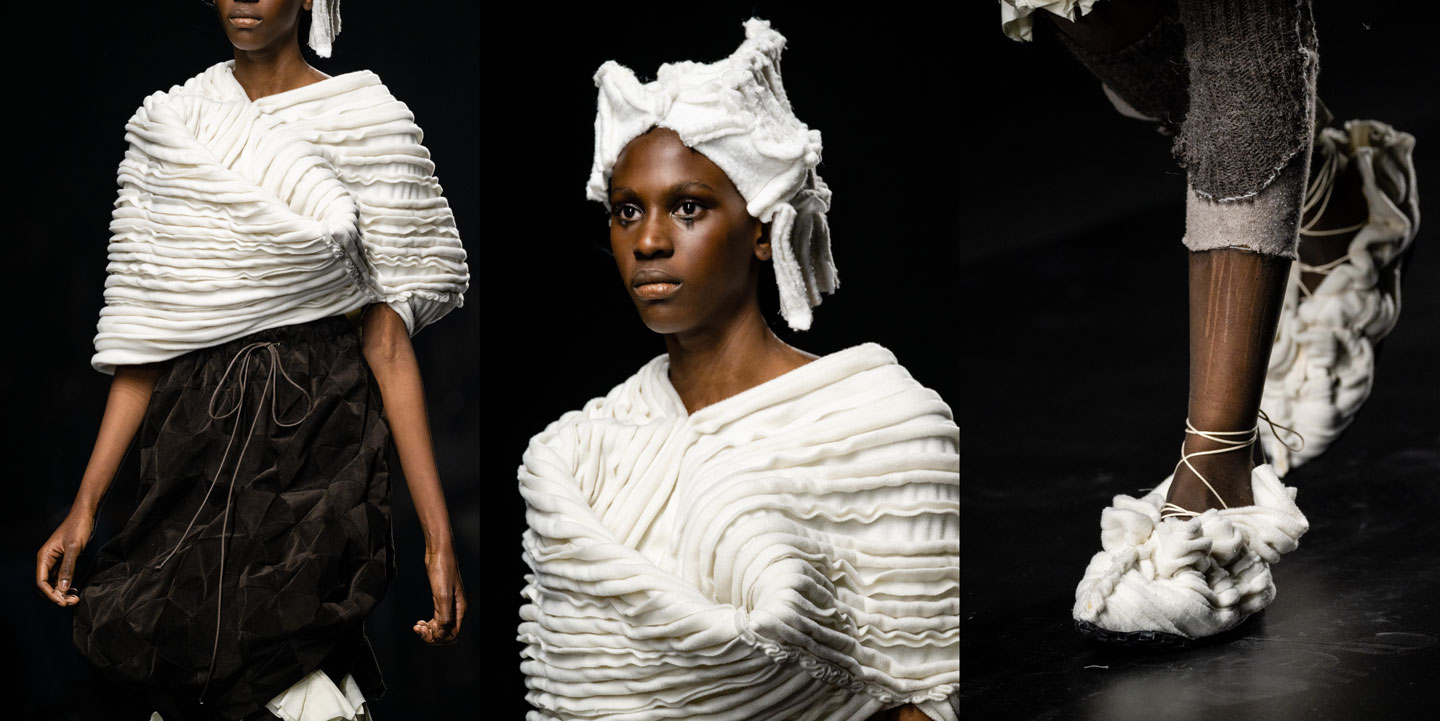 You trained at Istituto Marangoni. Can you tell us why you have been drawn to this school?
At first, I wanted to study Interior Design because I was fascinated by objects, but then they convinced me during the Istituto Marangoni Open Day. You can still perceive my fascination with objects and their shapes in my work, such as this paper dress standing on its feet without a model wearing it. I won’t forget the great work done during pattern-making classes: I always felt supported by the tutors I met on my path because once you explain your intentions and thoughts, they are ready to help you realise whatever you wish. 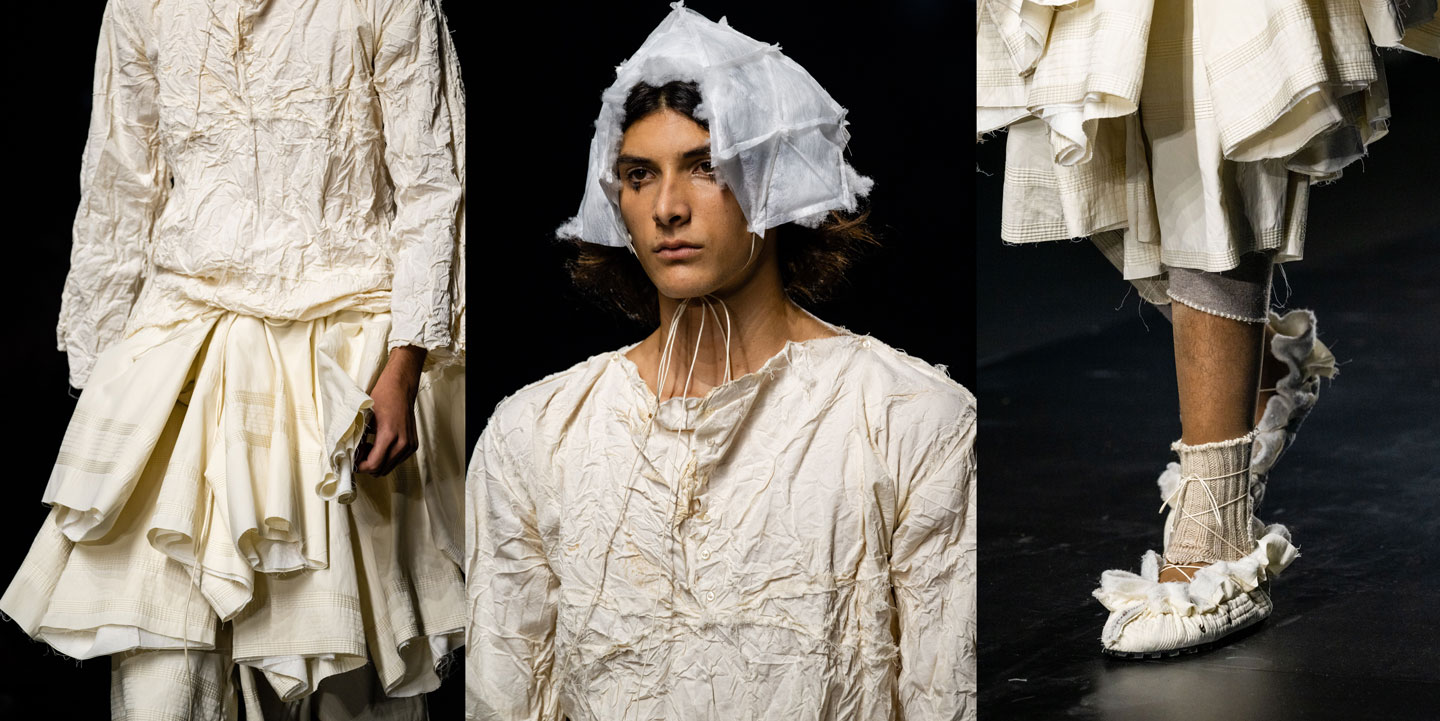 So, what’s next? Are you already planning what you will do in the near future?
I would like to continue to study, but I don’t know where yet.

What do you aspire to be?
I don’t have ambitions like “I want to be a designer or a creative director.” I would like to reach a certain status where my hard work is considered for the skills I have acquired and will acquire. Even if I become a designer in a huge company, I don’t want to stay anonymous.

Any advice for a young Marangoni student who dreams of showing their collection as you did?
Listen and learn from everyone and everything, and make everything a lesson. But first and foremost, you must trust your instincts and be connected to your personality and experience. Be consistent with your own story. 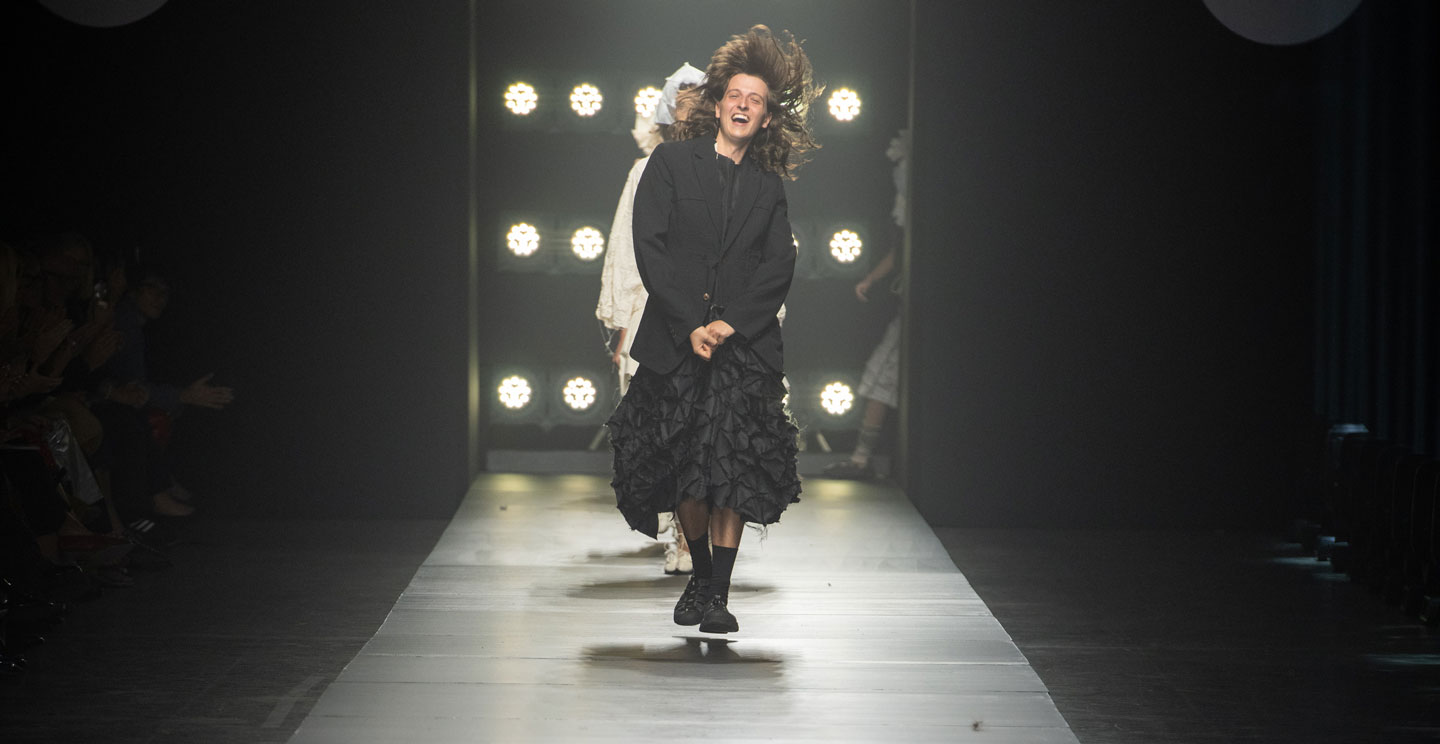