Artist Pietro Terzini: “I have not invented anything new”

Architect and artist Pietro Terzini captures the contemporary Instagram-friendly pop spirit in ready-made works of art he creates by assembling disruptive statements and fashion house packaging such as logo-printed paper shopping bags. Guest at the latest talk organised by Istituto Marangoni Milano, Terzini shared some insights into his career and success with the IM community. Here’s what we learned.

Let’s go back to 1996 when 2PAC passed away, rap became popular, Jay-Z debuted with the ‘Reasonable Doubt’ tour, Pink Floyd entered the Rock and Roll Hall of Fame, and Pietro Terzini was watching ‘Space Jam’ on TV. That was when Terzini fell in love with Micheal Jordan’s basketball shoes featured in the film, which triggered his interest in fashion, particularly streetwear. 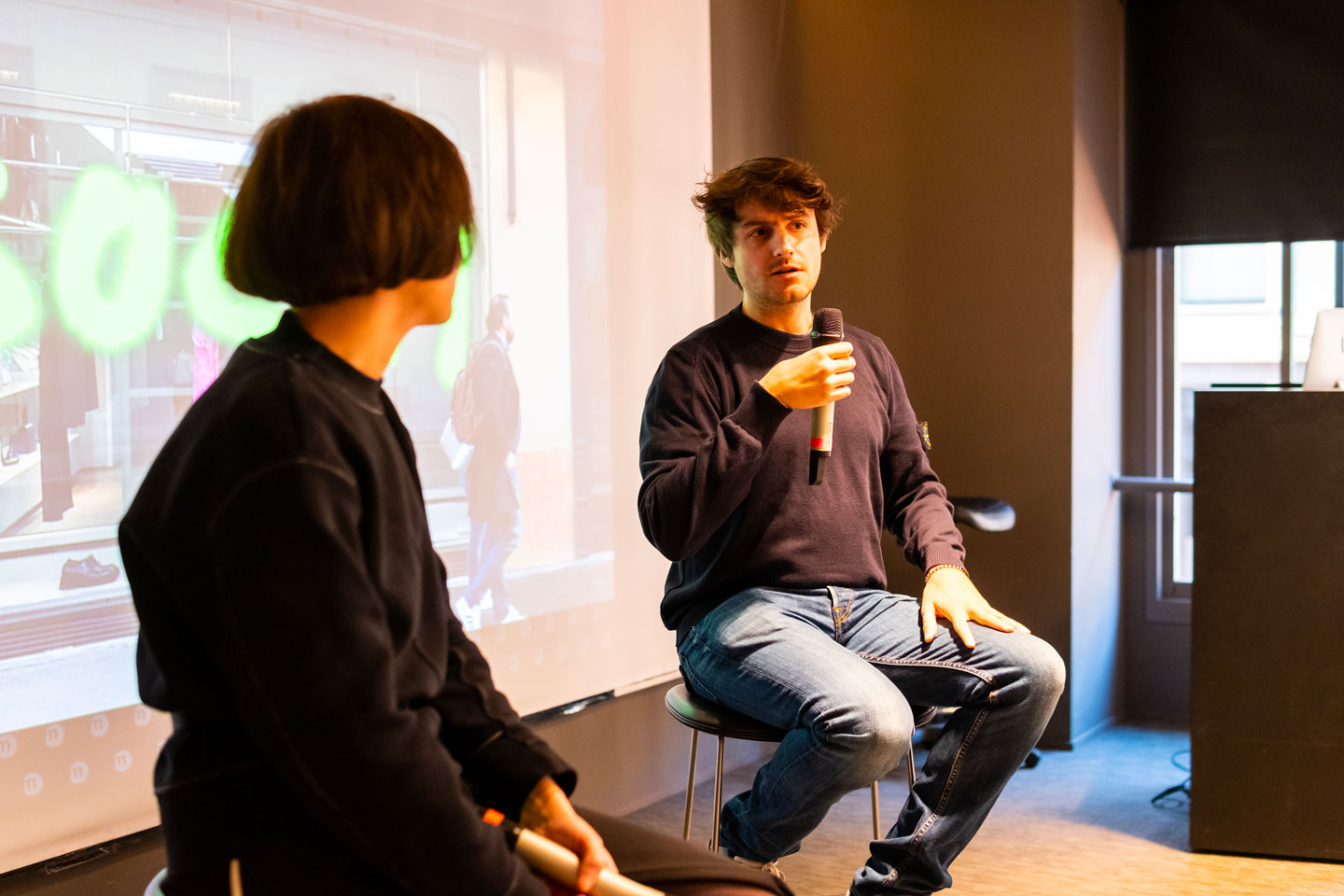 Pietro Terzini is a painter, digital artist and beyond. An architecture graduate, Terzini has worked with major international architecture firms such as Gregotti Associati and Henning Larsen. He was the digital manager for Chiara Ferragni and is a leading exponent of a contemporary art wave that has gained popularity on social networks and is now reaching high-end brands. 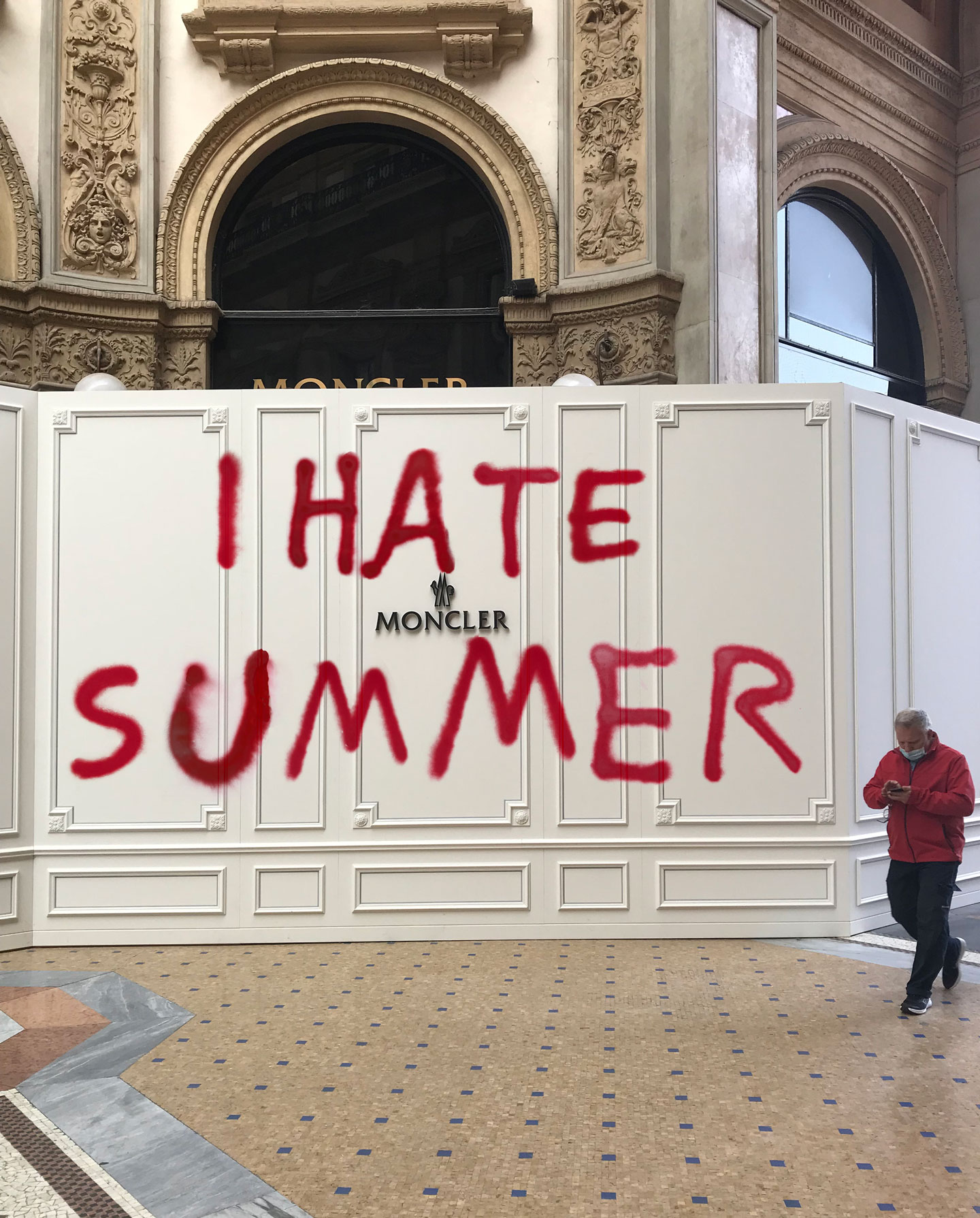 No wonder Pietro Terzini’s name and art have already been associated with established fashion houses such as Tiffany, Stella McCartney, Moncler and Palm Angels. He also most recently collaborated on the great comeback of Convivio, one of Milan’s oldest charity fashion events bringing together fashion brands, artists, volunteers, celebrities and kind-hearted fashionistas. 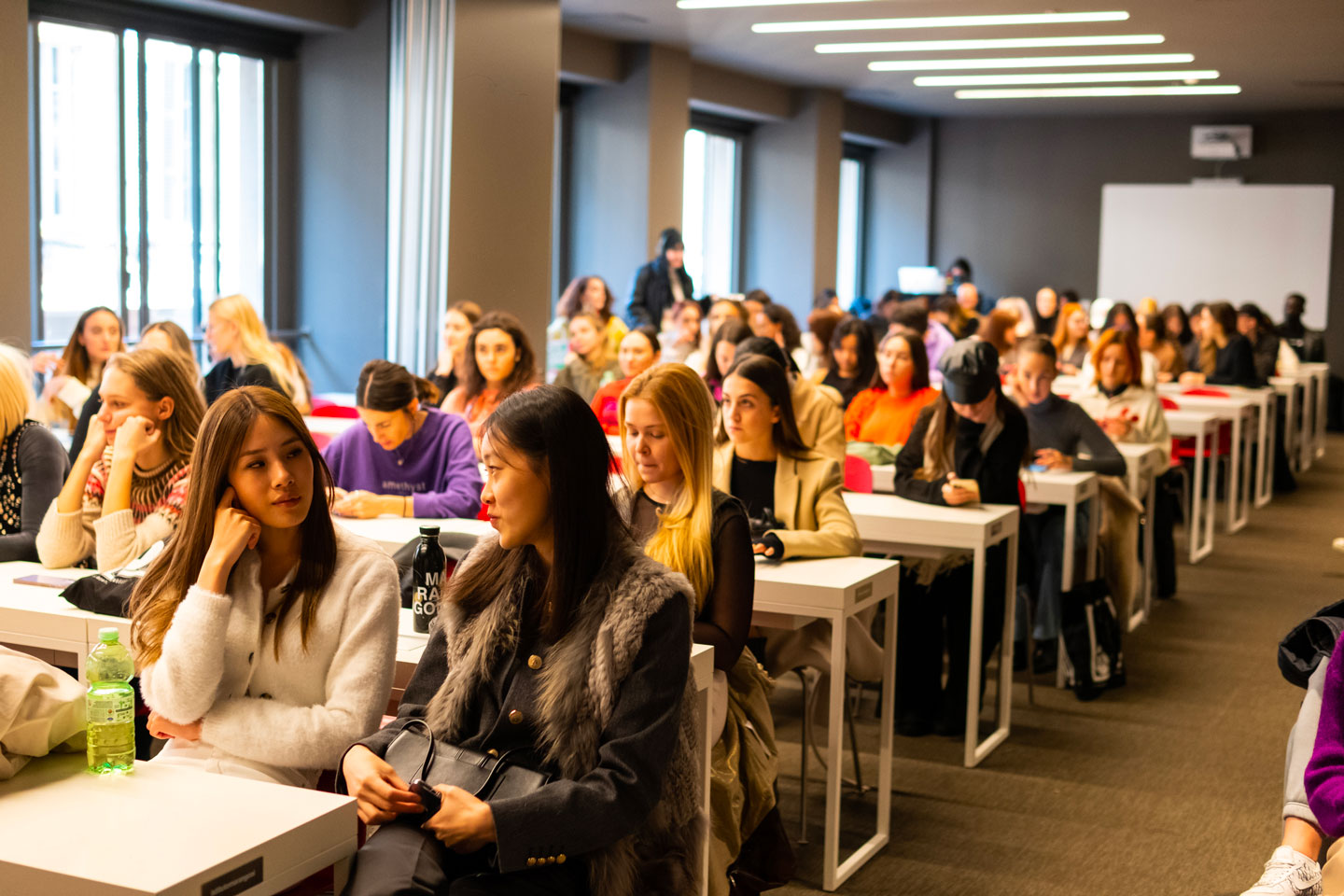 Pietro Terzini has been passionate about many different disciplines throughout his life. He wanted to be a music producer and then enrolled for a BA in architecture at the Politecnico di Milano. He went on with a master’s degree in economics at Bocconi and later joined Chiara Ferragni’s team after sending them an application via LinkedIn. In the meantime, he never stopped creating paintings and writing, and he also opened the Instagram page “Friday Fries”, where he had fun posting memes, a big trend back then. 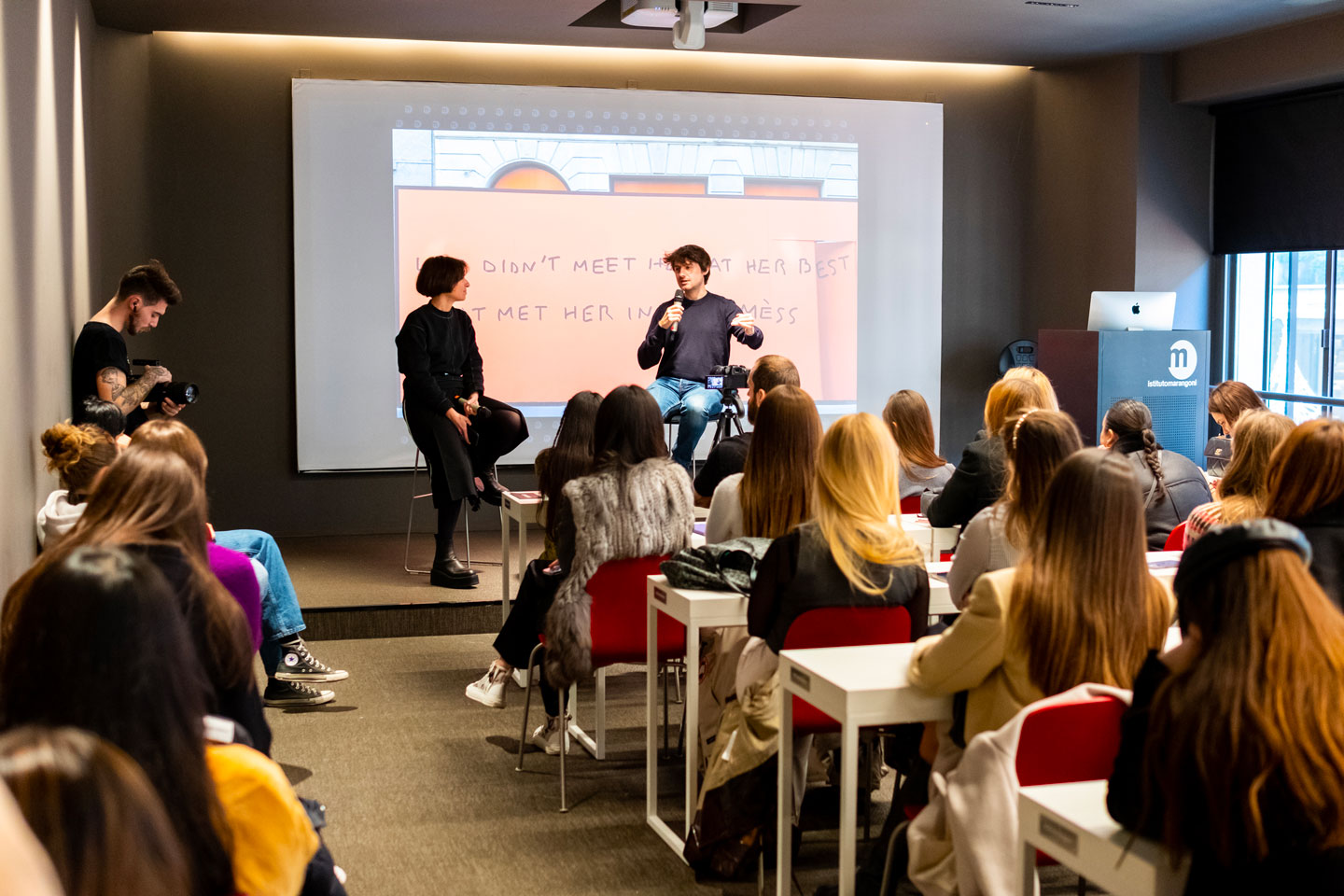 Working for Chiara Ferragni, with a devoted following of 4 million at the time, was key to Pietro Terzini’s art. The digital-entrepreneur-to-be used to receive many gifts, mostly from luxury brands and all nicely packaged in boxes, which she would throw away right after opening. Terzini started collecting them with the idea of them being blocks of colour to decorate his bookcase. But there was still no real spark between him and those branded paper totes. 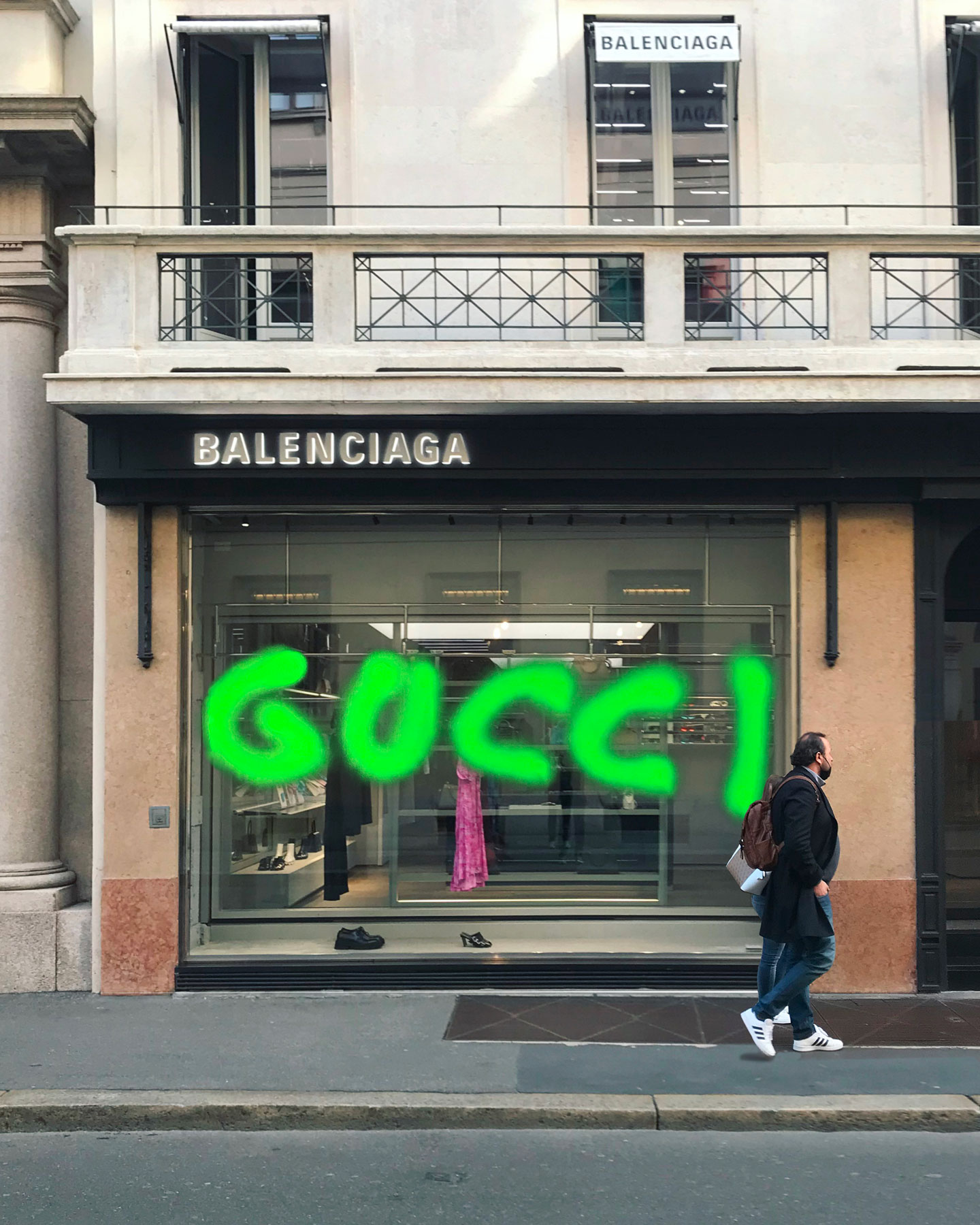 One day, a colleague asked him why he was taking all those empty boxes home. He promptly answered her, and that was when the epiphany hit him. As he was replying to her, Pietro Terzini felt an idea take shape in his mind. “Can’t you see that if I hang them on the wall, they look like paintings?” he said. And yes, they have since become paintings in Terzini’s hands. 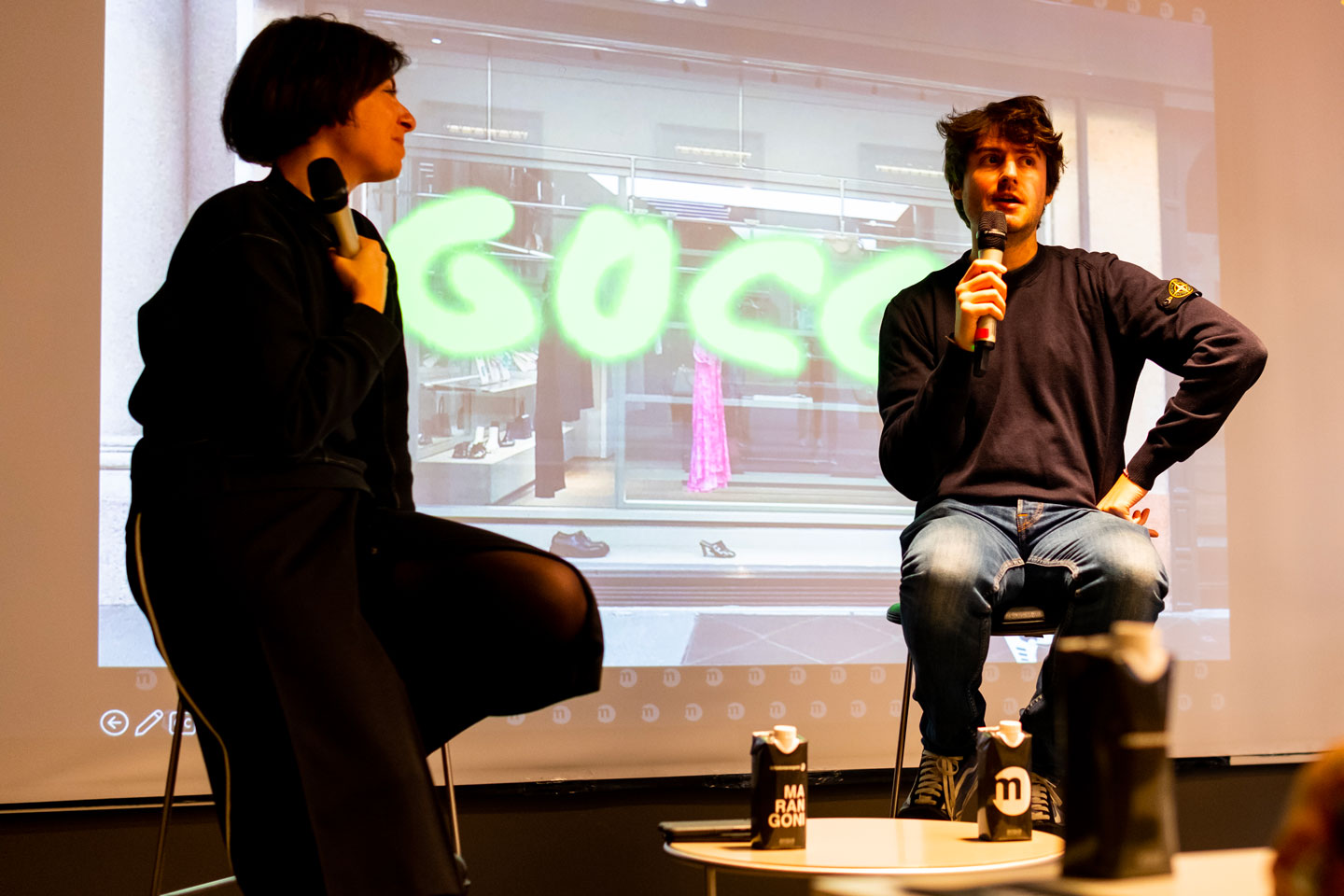 He then started out turning what were paper shopping bags or shoe boxes into ready-made works of art by using and playing with statements and memes: the concept of the Instagram account Friday Fries was born. 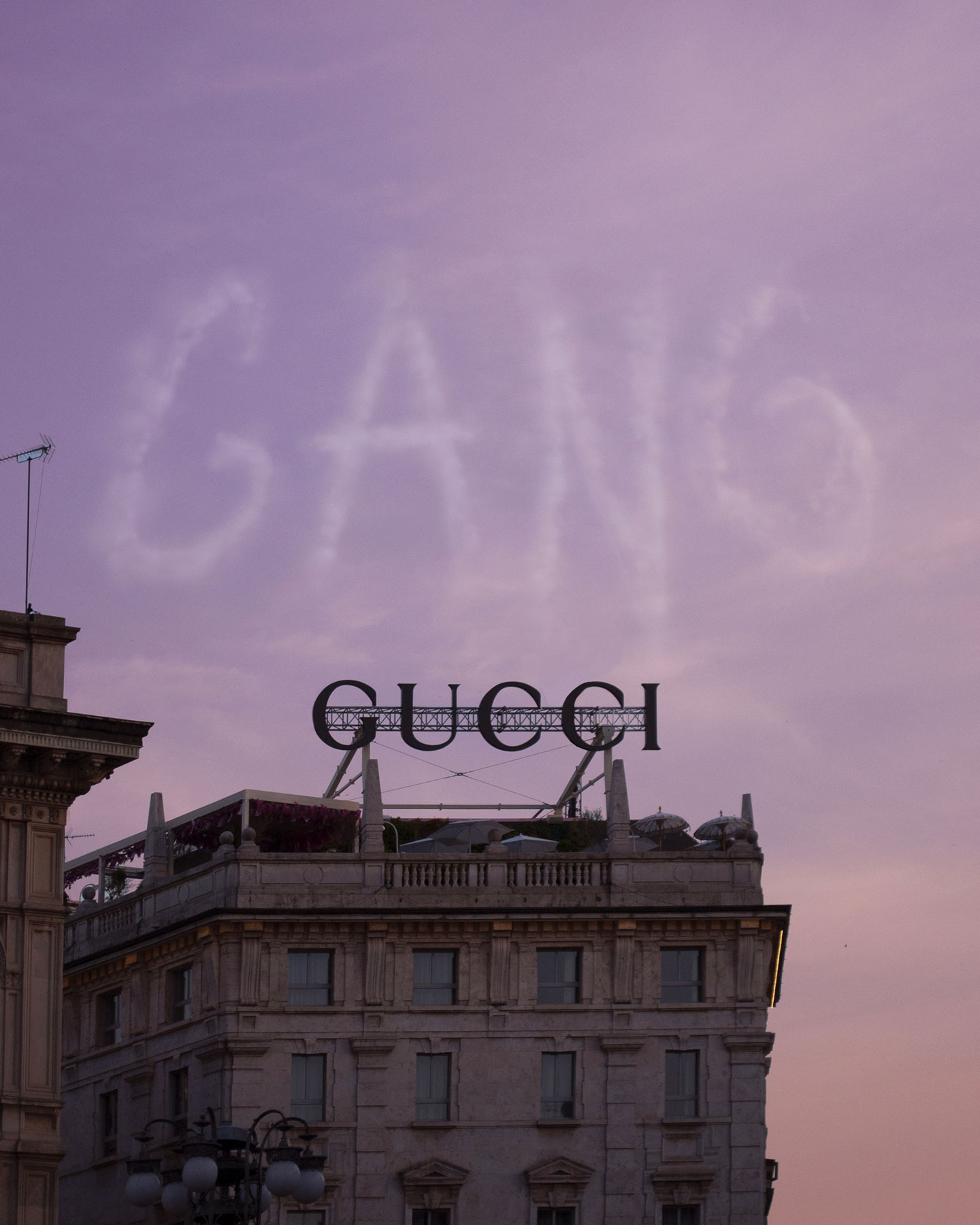 Aiming to appeal to everyone through contemporary, Instagram-friendly pop art, Pietro Terzini came up with these two cents: “While in previous years there were only a few very popular reference brands, in today’s scenario there are so many beliefs, both literally and in fashion. As brands take political, cultural, social, and environmental stances, companies target customers who do not buy for design or fabric quality, but for the value system brands have built around their image.” The big question in Pietro Terzini’s thoughts was crystal-clear: “How do I reach everyone?” But he already knew that answer: “By driving to every single fashion temple.” 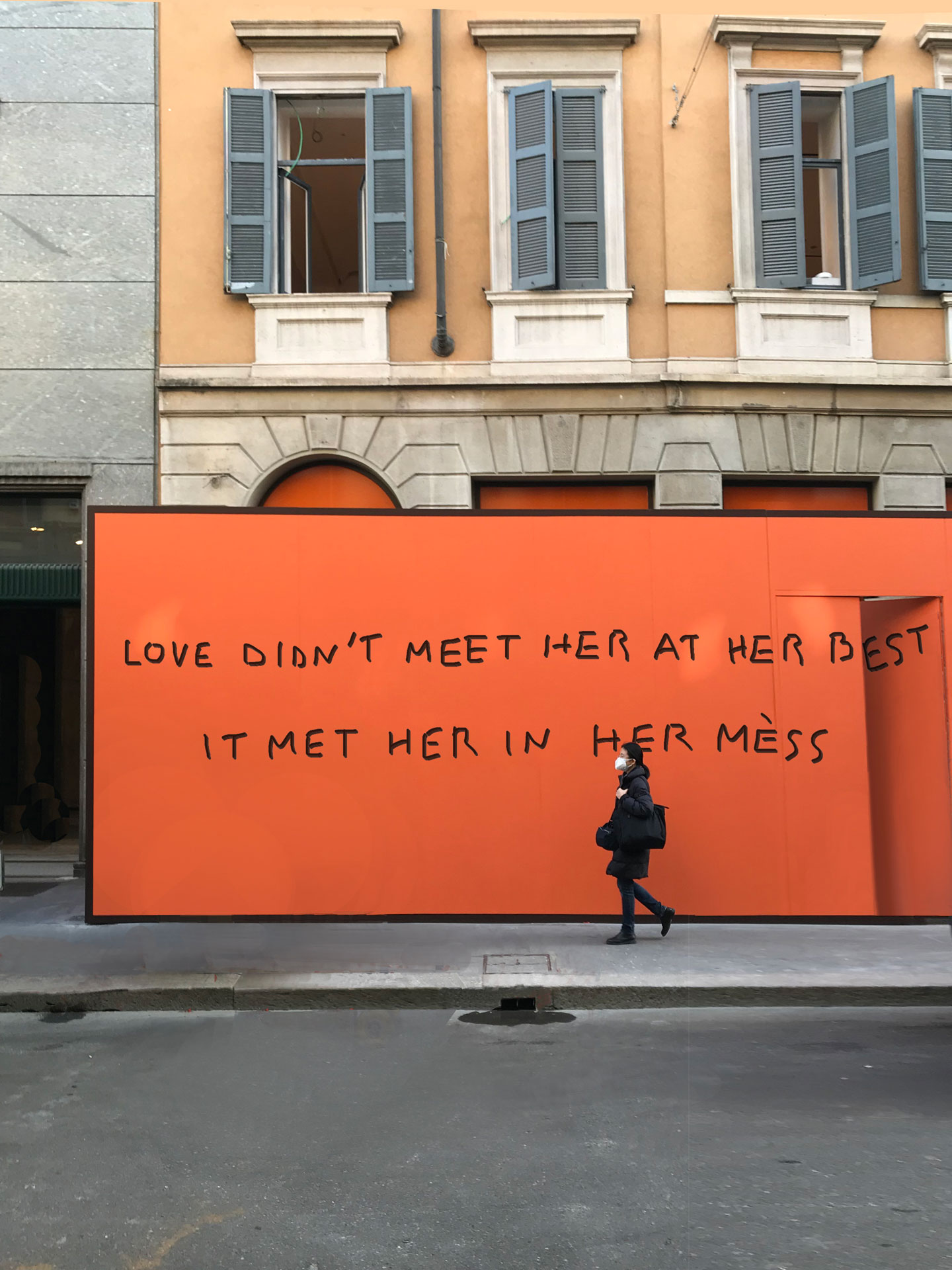 Pietro Terzini’s success was not long in coming and concerned that irreverent writing on the new Hermès store building site in Milan that we all know by now as the most viral digital graffiti work on the Internet. You may wonder now what about the story behind Terzini’s iconic inscription on the also iconic supersized orange background, stating, “Love didn’t meet her at her best. It met her in Her mèss.” One day Pietro Terzini went for a run in Via della Spiga and Via Monte Napoleone, and there he found what he still describes as “a marvellous canvas.” Thus, the graffiti artist went home to get his spray can kit and intended to return to write a quote that had been buzzing in his head for some time. His housemate, a lawyer who had been asked to watch his back, persuaded him to stop by giving him two simple reasons: the risk of a criminal record and a fine. Pietro Terzini, therefore, decided to give up the idea and set about taking a photo while turning himself from a graffiti artist to a digital graffiti artist. He later proceeded to edit the picture he had just taken and add the notorious statement, thus creating a photomontage, then posted the outcome on social media. 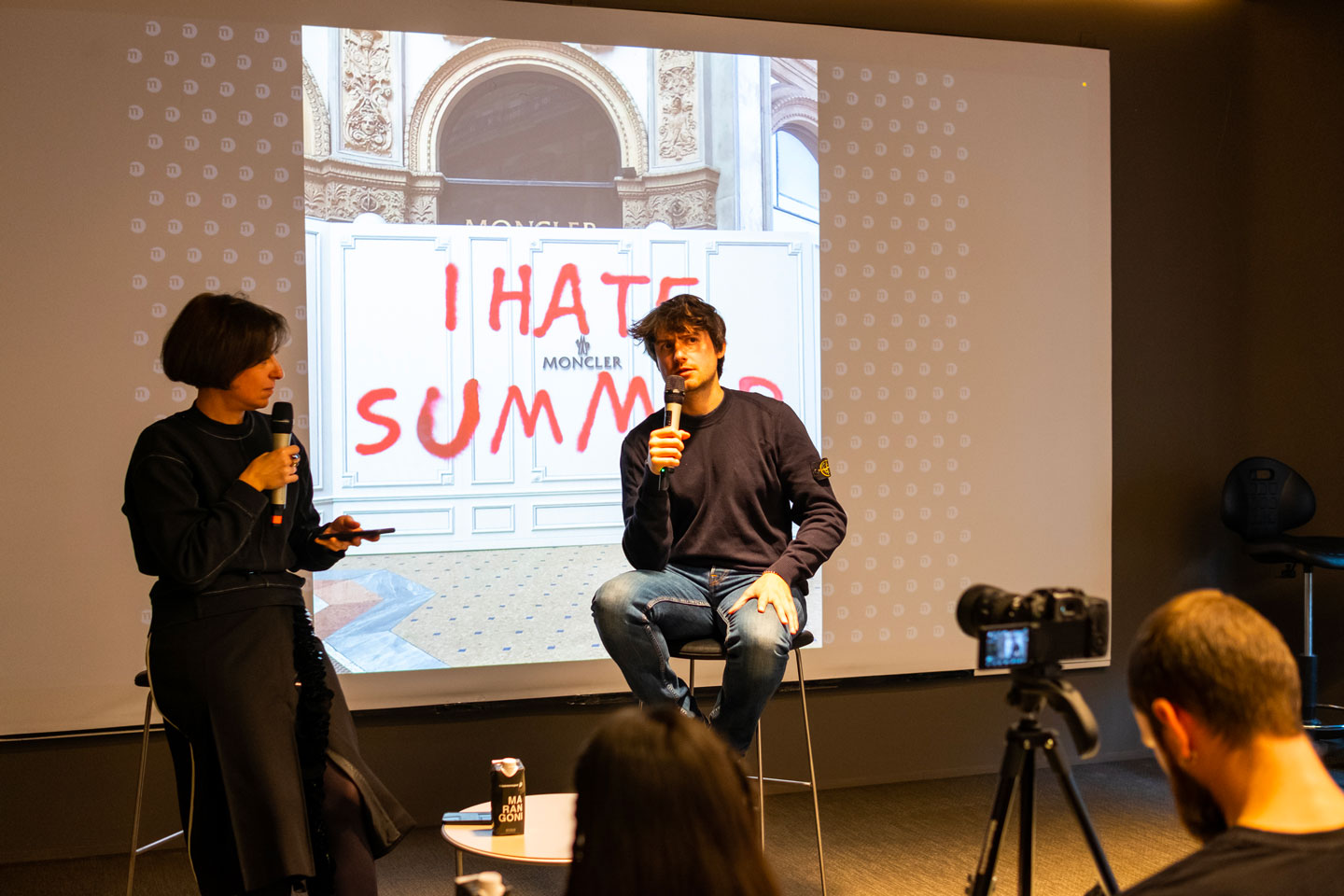 The artwork was a great success.

From that moment on, the artist’s line began to ring: first came calls from art galleries to hire him for his paintings, and finally, it was brands looking for him. From Valentino and Stella McCartney to Kiton and Palm Angels: they all wanted to collaborate with Pietro Terzini. 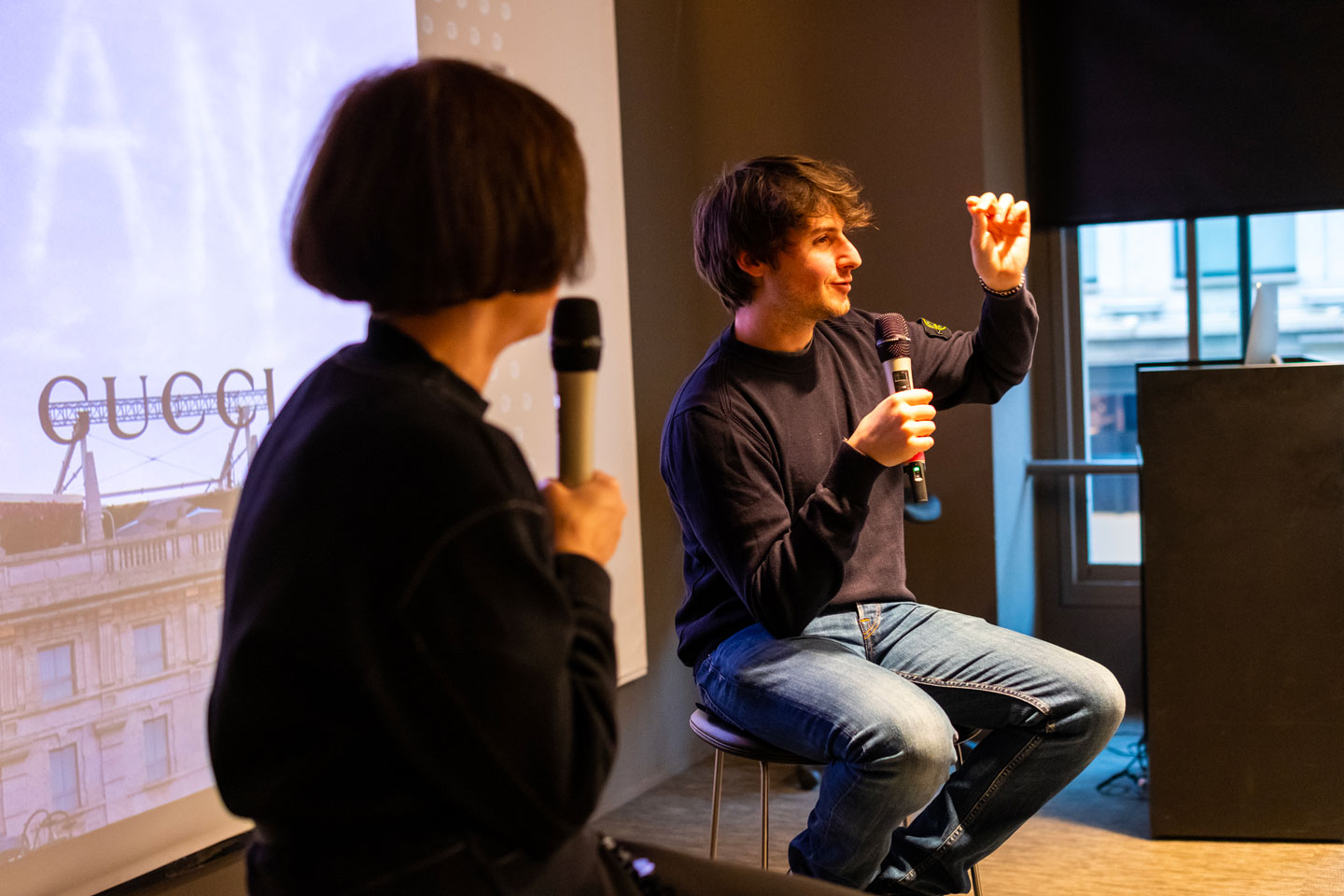 “Throughout my life, I’ve always tried to express myself by doing something, yet I haven’t invented anything new,” he told us during a guest talk at Istituto Marangoni Milano.

The most exciting tidbit came when this somewhat extravagant chat with Pietro Terzini drew to a close. When asked, “Who do you feel you should be grateful to?”, Terzini named Camillo Botticini, his former professor, “who will probably never even remember about me, yet he taught me so much. He did not reject any idea, but you had to bring him a hundred versions of that proposal by taking it to the far extreme. He was very picky. You could do anything, but you had to give everything back! As he showed me, the hardest challenge is always to choose the best version of your own idea.” 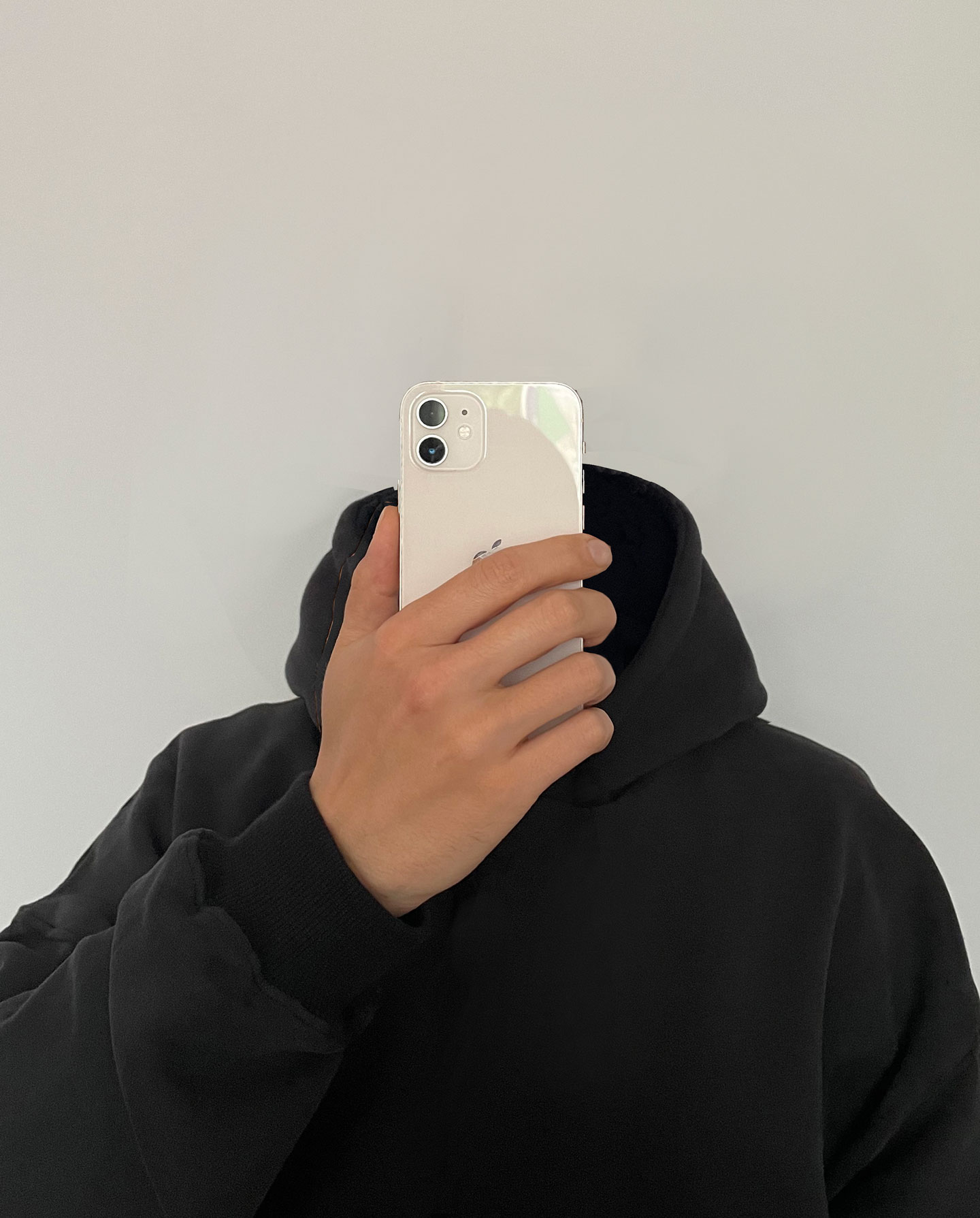 And as he was saying his goodbyes, I wondered: what if he himself had become – with all his incredible works of art – one of those fashion legends he looked up to?