Who is the former Yeezy Gap designer wowing Paris

It’s summer 2022, and pleasantly crisp air is giving editors and journalists the energy they need to face another day of Paris fashion month. The city of lights is now ready to shine with its haute couture schedule: industry heavyweights are flying to Ville Lumière from all over the world after a few days of well-deserved respite from the more-than-typical buzz the menswear events brought to the metropolis.

If you had a hot ticket to any of the men’s week shows, you’ve no doubt seen long lines of people waiting for the superstars, the fashion houses’ special guests, to make their grand entrance, some even standing over the bus bays.

Of course, the big names of the fashion system were at the forefront with their maxi shows, joined by a star-studded line-up of celebrities, supermodels and actors of all generations, whose names were called out loud and clear by people of all ages waiting outside the venues.

Kendrick Lamar’s invocation was distinctly heard throughout the city when he performed live for Louis Vuitton in a courtyard of the Louvre, wearing his crown of thorns. The buzz went crazy as Lisa, the K-pop superstar who fronts the group Blackpink, was about to arrive at the Celine by Hedi Slimane fashion show.

Well, the question now becomes if any spotlight was left for less established talent within this schedule of events planned big and made even bigger. Actually, there was.

Mowalola Ogunlesi rocked Paris fashion week with her off-schedule show in the Élysée Montmartre performing arts theatre. The defile took place on a smaller scale with no more than 300 attendees, but insiders’ feedback was overwhelming. Well, who’s that creative everybody’s talking about? Most people within the industry know her name – even if just a few buy her clothes. 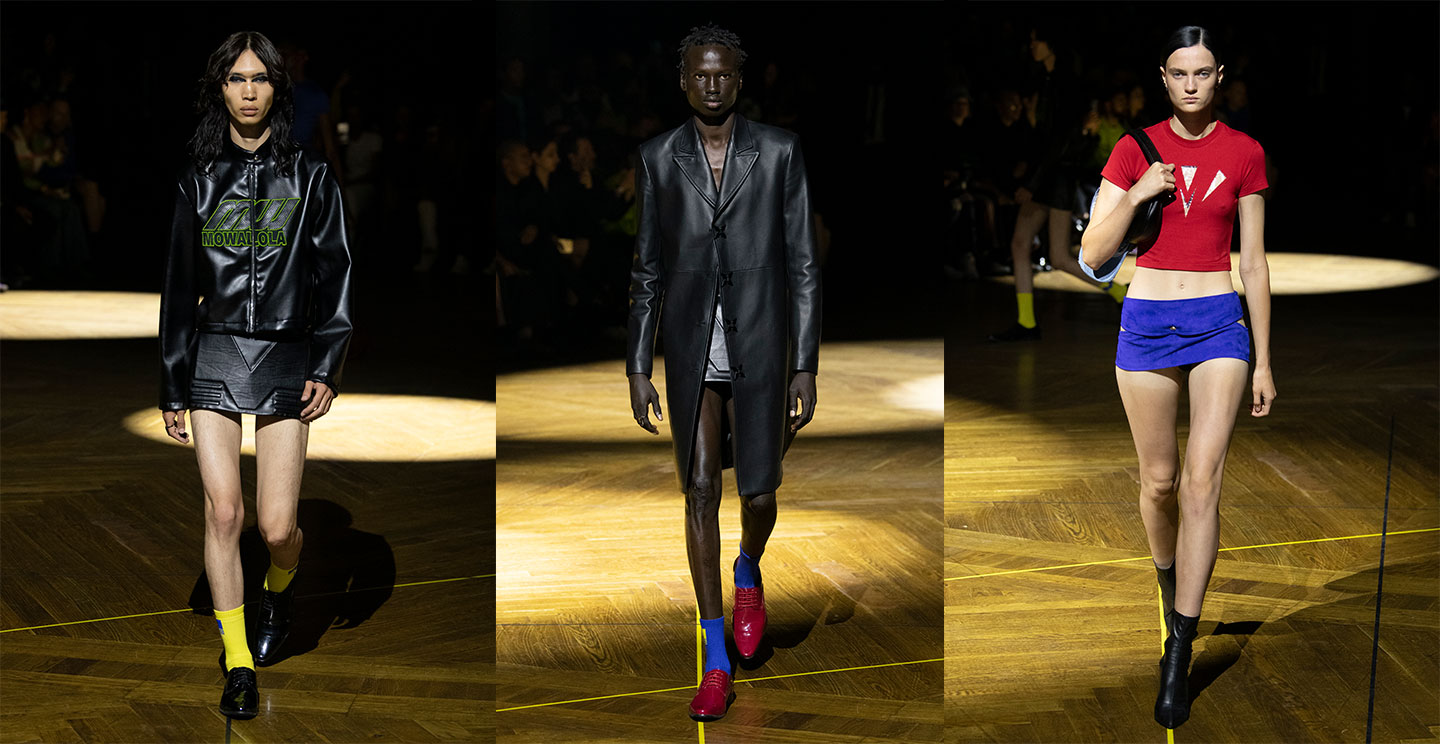 Although I might wonder, “Which multi-brand shops will sell her pieces? Will the conceptual retail giants step in, or would the designer make a disruptive choice?”, Ogunlesi is one of London’s hottest rising designers. And she is also a keen drummer. So, she is back to make some noise breaking the stillness.

Born in 1995, the UK-based designer has not showcased a ready-to-wear collection since spring-summer 2020, having decided to devote all of her energy as design director of Yeezy Gap. 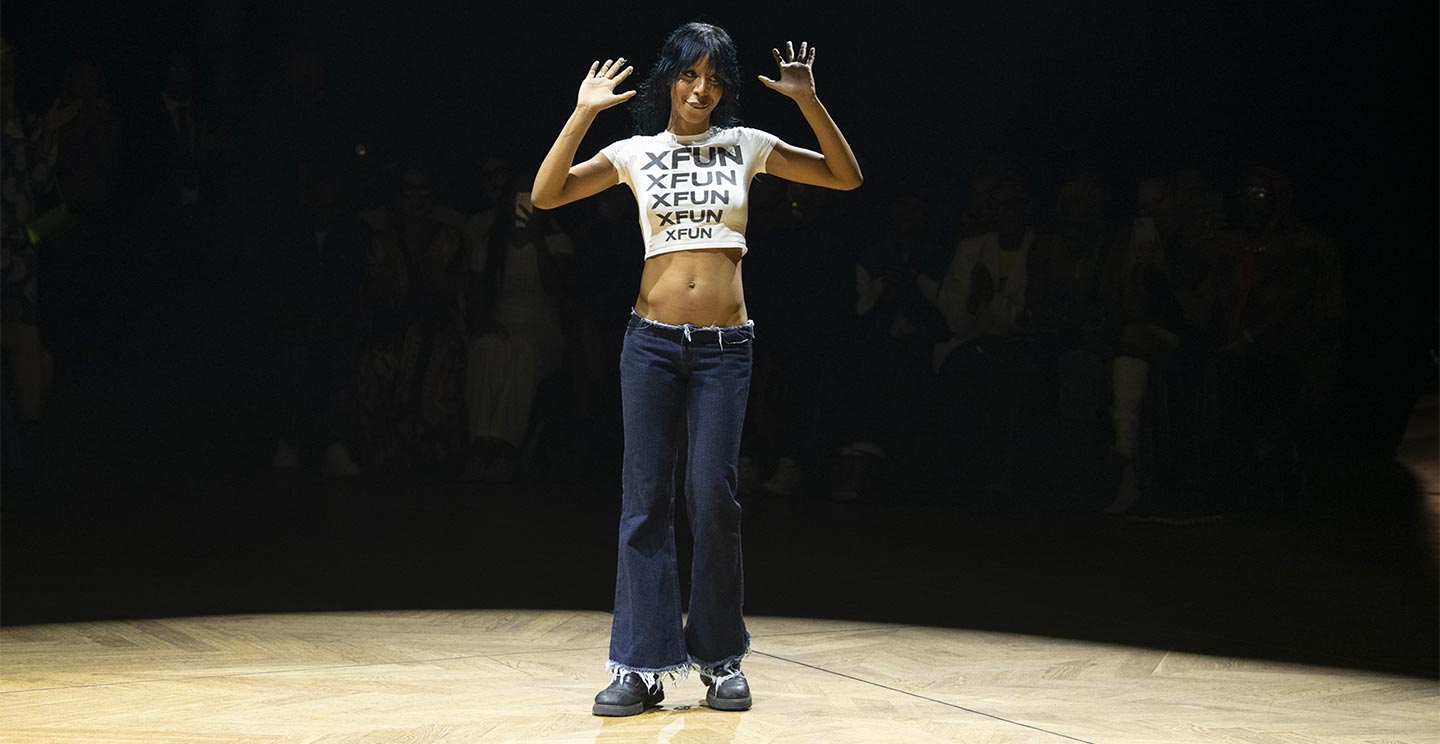 However, some while ago, Mowalola Ogunlesi’s tweet “RIP to this era” raised some more questions: What’s up with Ye, aka Kanye West? Is he about to lose all the women in his life? And will Mowalola Ogunlesi follow the rise of Kim Kardashian’s business, which has proven to go on with or without Ye?

After a three-year hiatus, the catwalk comeback of her eponymous brand Mowalola shows that the creative has no intention of staying put. 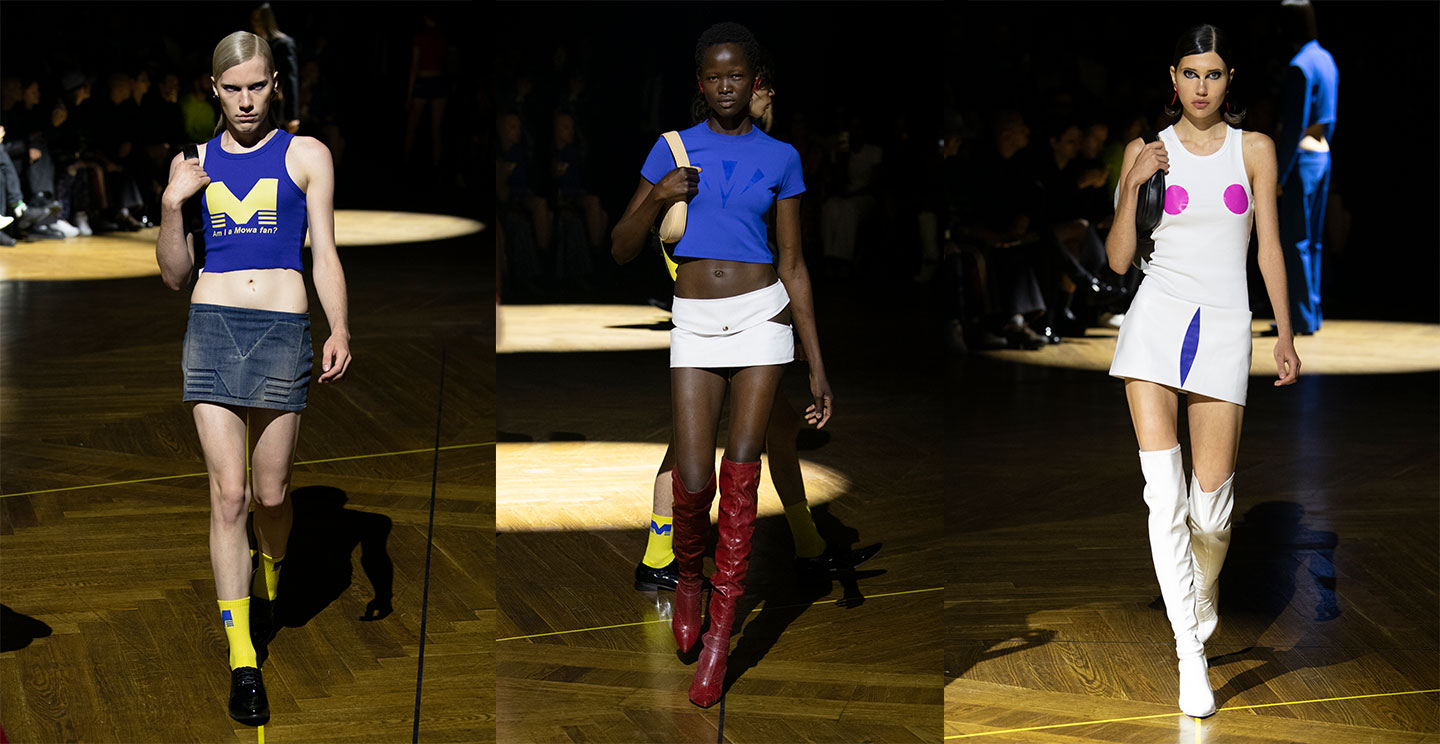 But let’s take a step back. As reported by W magazine, both of Mowalola Ogunlesi’s parents are fashion designers, as was her Scottish grandmother, who, after marrying Ogunlesi’s grandfather, moved to Nigeria in the 1960s. There, she launched a fashion label using locally produced fabrics. From the age of 12, Ogunlesi studied at a girls’ boarding school in the English countryside.

Some years later, Ogunlesi’s 2017 breakout graduate show in London laid the groundwork for her success: the Psychedelic collection was a brilliant homage to Lagos petrol heads and Nigerian psychedelic rock from the 70s and 80s.

“Ogunlesi offered up men’s wear as you rarely see it: sexy and unhindered by stereotypes, or, as she described it, unapologetically black and pan-African,” W magazine stated at the time.

Her lookbook images were photographed by Ruth Ossai and styled by Ib Kamara, both of whom have undoubtedly established themselves as fashion heavyweights over the past five years. So did Ogunlesi.

Looking now at last week’s show, no doubt sexuality is still present in buckets in Mowalola Ogunlesi’s work. But she also has a keen eye for business and developing great ideas with a pool of uber-cool collaborators. 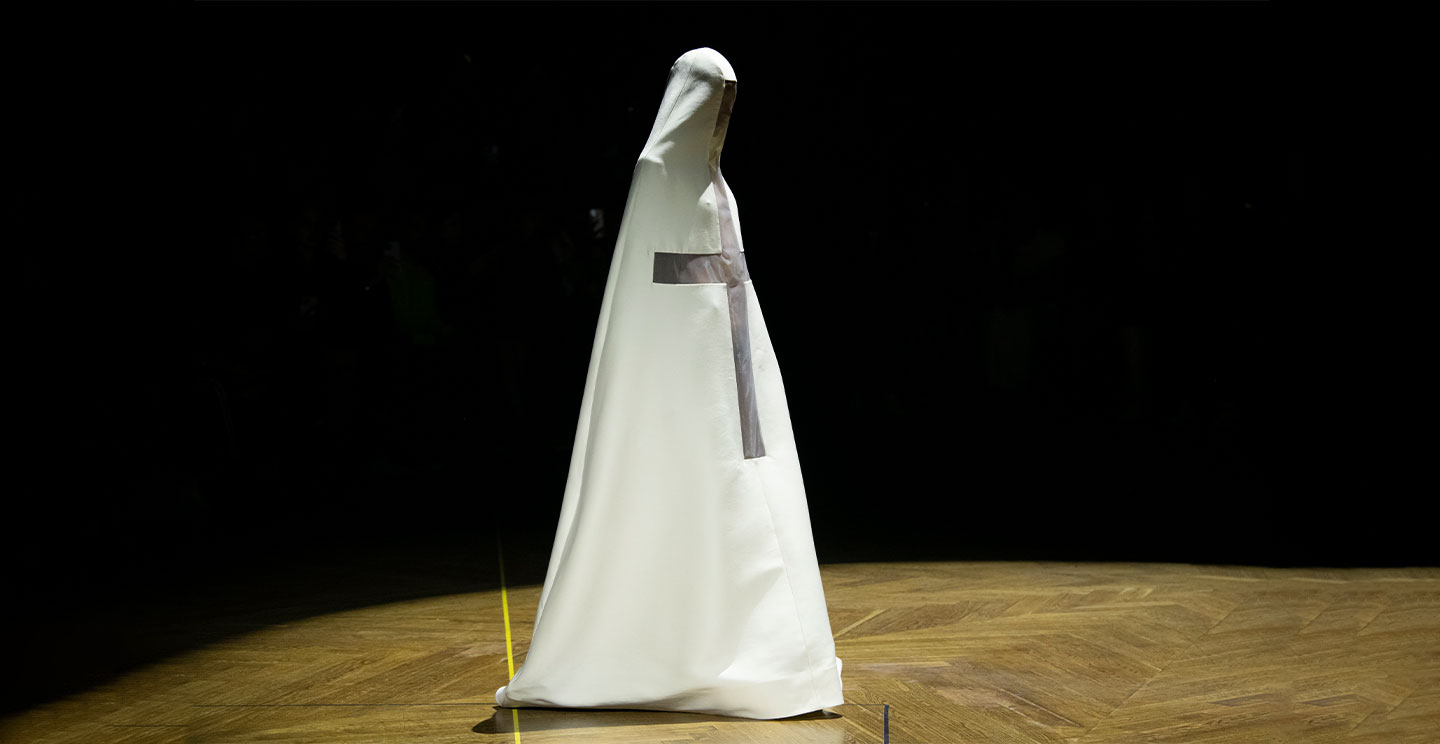 Unsurprisingly, Vogue Business revealed that she signed a collaboration with New Balance and chose the 247 Showroom to manage the brand’s distribution globally for the first season. Moreover, the défilé was hosted in partnership with TikTok Live.

She then teamed up with the best in show organisation, from hair stylist Virginie Pinto Moreira (who also works with Fenty) to Inge Grognard on beauty, from casting director Mischa Notcutt of 11C (used by ​​Balenciaga and JW Anderson) to stylist Lotta Volkova.

So, Mowalola’s Burglarwear collection hit the scene, introduced by a title suggesting the designer’s study on what it really takes to steal – money, jewellery, data, power, hearts.

“Wherever you go, you are surrounded by thieves,” Mowalola Ogunlesi explained. “The person next to you; across from you; even the one in the mirror. After all, what it takes to take from someone else has little to do with a certain personality type or chosen – rather, it’s a matter of accessing a state of mind that dwells within us all.”

As much as her collection questions what it means to steal by creating a common ground for white-collar bankers, pastors, Yahoo boys – Lagos’ ostentatiously dressed internet scammers – all unified by a lack of remorse in their actions, Mowalola’s show also explores what it means to be stolen. 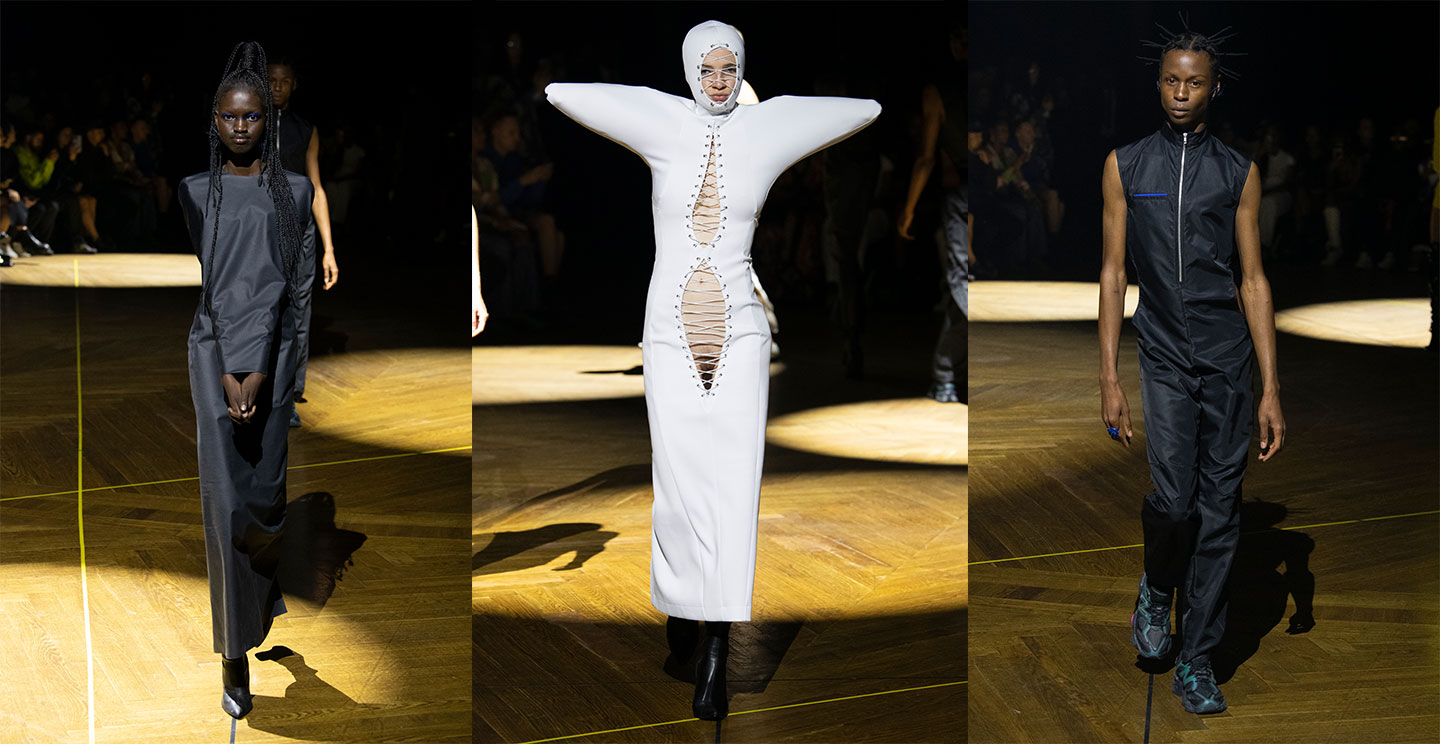 Mowalola has now taken the next step by featuring new fabrics and more experimental silhouettes. “A long-sleeved hooded minidress and a knitted column gown with laced fronts are constructed in a way that intentionally restricted arms, evoking associations of submissive fetish and kidnapping,” Mowalola Ogunlesi concluded.

Guess I have a few last questions, fair and square. Since launching her brand in 2018, Ogunlesi has already designed a dress worn by Naomi Campbell, a much-talked-about piece featuring a bullet wound dripping with blood. She has dressed Kim Kardashian, Kanye West and their daughter North West, among others. She has also attracted an incredibly high fan base in the music world, including Drake, Solange Knowles and Dev Hynes. Are these the hot names of the star system that will finally get the label off the ground in the fashion system? Who will wear Mowalola pieces on red carpets and newspaper covers next? Or will the brand’s approach to the spotlight be radically different?