Can you recognise a fashion moment when you see one? Guests at Coperni’s show in Paris last week probably did when they assisted in the performance of a nearly naked Bella Hadid getting a white dress spray-painted directly on her body in the middle of the catwalk. A guaranteed wow effect for the creative duo Arnaud Vaillant and Sébastien Meyer. However, far from being magic, this new iconic moment was nothing but the result of a brilliant combination between fashion and technology. The strong chemical scent hadn’t disappeared yet in the air of the Salle des Textiles of the Musée des Arts et Métiers, staging the spring-summer 2023 collection, when those eight minutes immediately became viral. 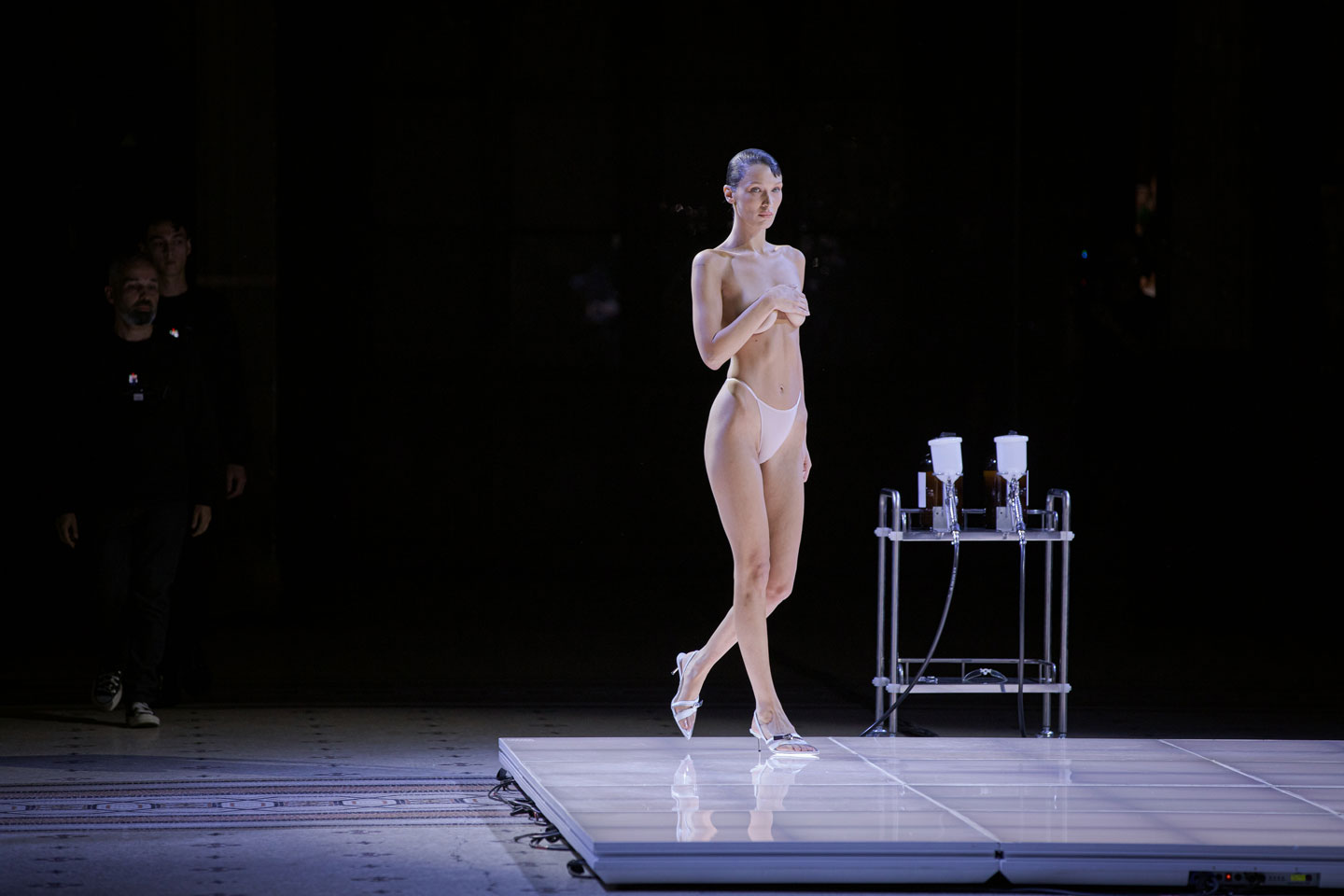 The designers of the French label have embarked on a collaboration for a futuristic fusion of science and fashion to create a unique live dress in partnership with Manel Torres. This former fashion design student is now the head of Fabrican Ltd. He invented and developed the Spray-on fabric©, a patented technology which dries instantly on impact with any surface, including liquids, to create a non-woven fabric layer. Torres personally applied this innovative material to the American top model’s body with the help of an assistant. 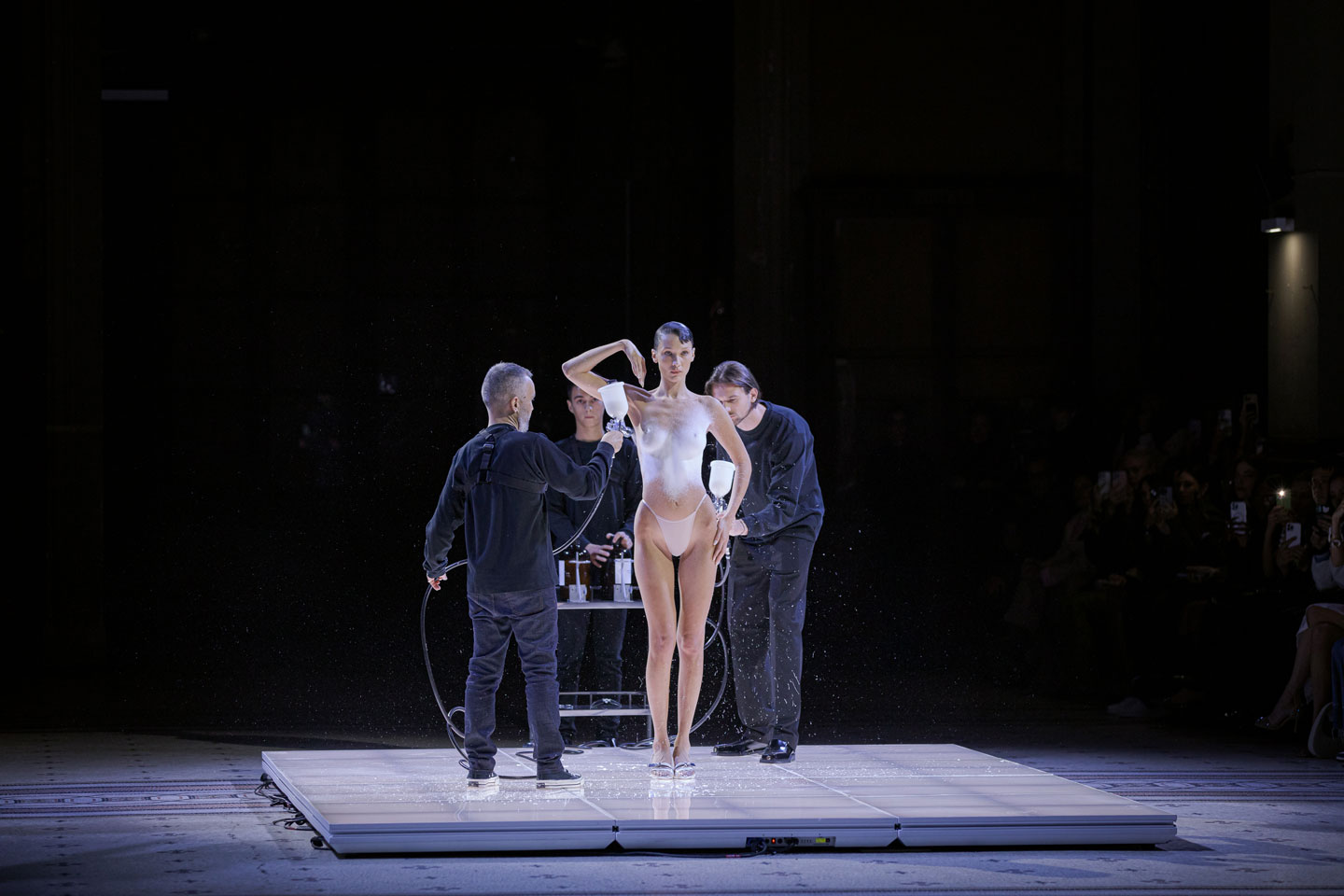 This incredible success was witnessed not only by the buzz that followed but also by the numbers. “Paris Fashion Week is still ongoing; however, due to a large number of requests along with the understanding of context, we couldn’t help but exceptionally break with precedent for the recent Coperni stunt, which has become a viral, cultural phenomenon.” These are the words used by the brand performance company Launchmetrics to communicate the results of the first 48 hours of event coverage. 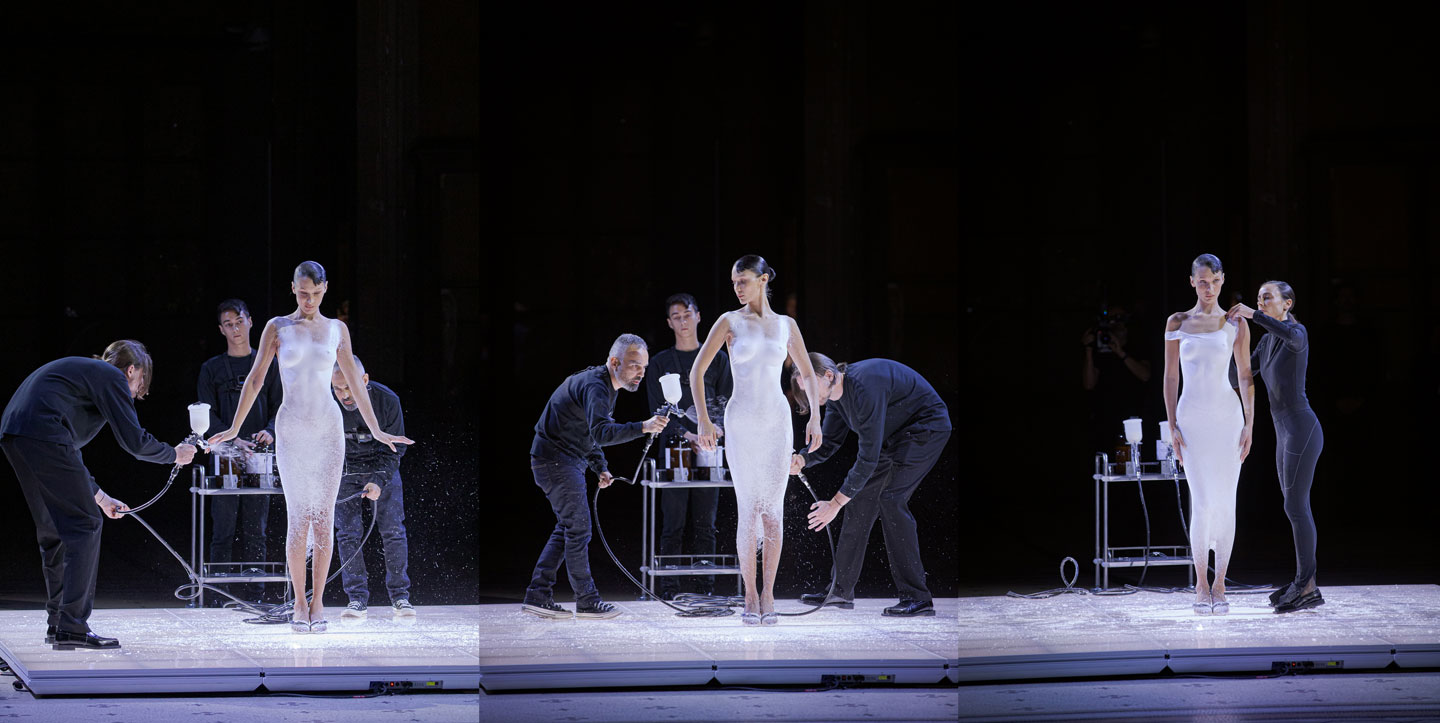 “As this moment has made it past the niches of the fashion world, we believe it’s worth being studied as such… independent of Paris Fashion Week, as a moment in pop culture. This means that the scope of this research is done to reflect the conversations around Coperni + Bella Hadid, without necessitating that placements mention the Paris Fashion Week,” Launchmetrics experts explained. 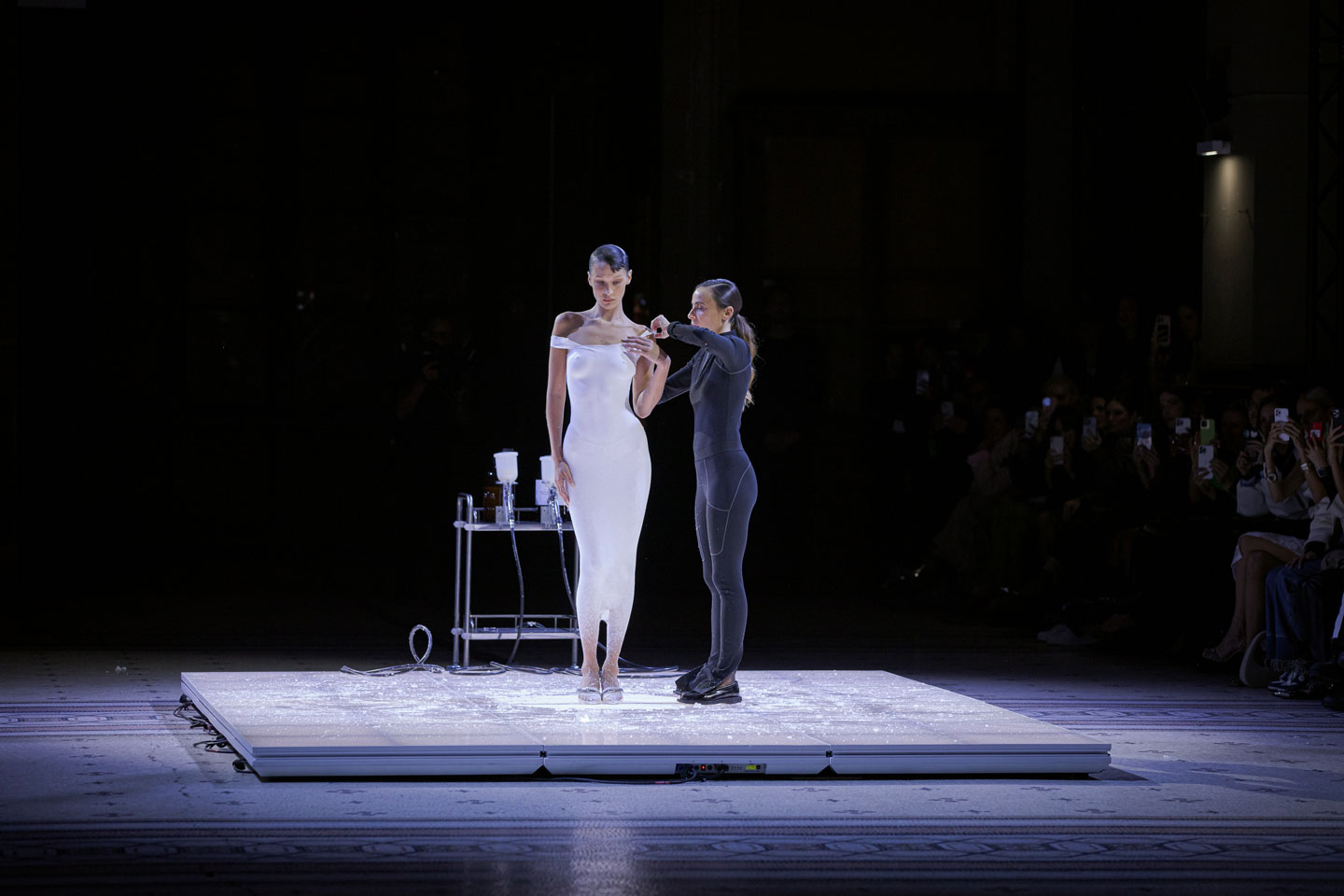 And it is no coincidence that they unveiled the innovation in the Salle des Textiles, designed in 1850 by the museum’s architect Léon Vaudoyer, initially to exhibit thread and weaving machines. This incredible fabric promises to be the most innovative and avant-garde system of the 20th century, proving again that the world is constantly evolving and the future is still to be drawn. And it is also raising the fashion industry’s environmental and socio-economic challenges.

Also, Hadid’s choice was not random. Vaillant and Meyer said she was the only model they considered for the performance since she recently launched her CY-B3LLA range of NFTs, sending out 11,111 digital versions of herself in the metaverse. 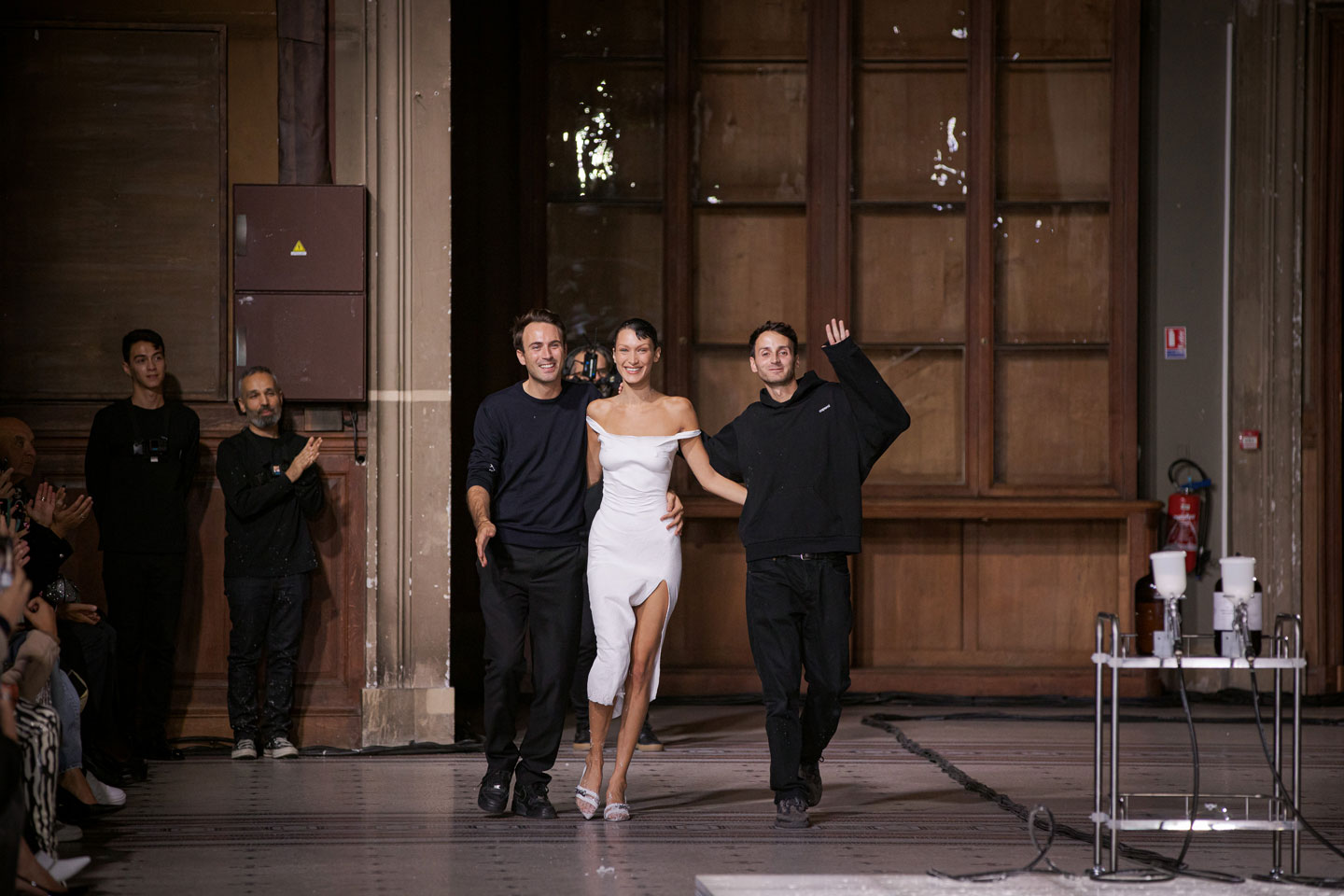 Scientific progress has always depended on demonstration and realised examples; this project has taken this proven formula as its template. In the past, fibre, textile and finishing research outcomes have been slow to reach recognition in material terms. Coperni offered to fast forward today’s research potential by highlighting the prototype opportunities of the future by emphasising the essential collaborations that push invention out of the lab and into our everyday lives.

Fashion designers need new materials and fabrics to create products to address evolving lifestyles and consumer demands. The universal desire for fashionable clothing is as ancient as history, and science has never offered so many possibilities to design studios and consumers. Throughout history, our desire for aesthetic pleasure has been met by technology to fashion it. The 20th century gave us a dazzling palette of rich, synthetic colour and the fabrication of every natural fibre, making a democracy of the former luxury of fashion. 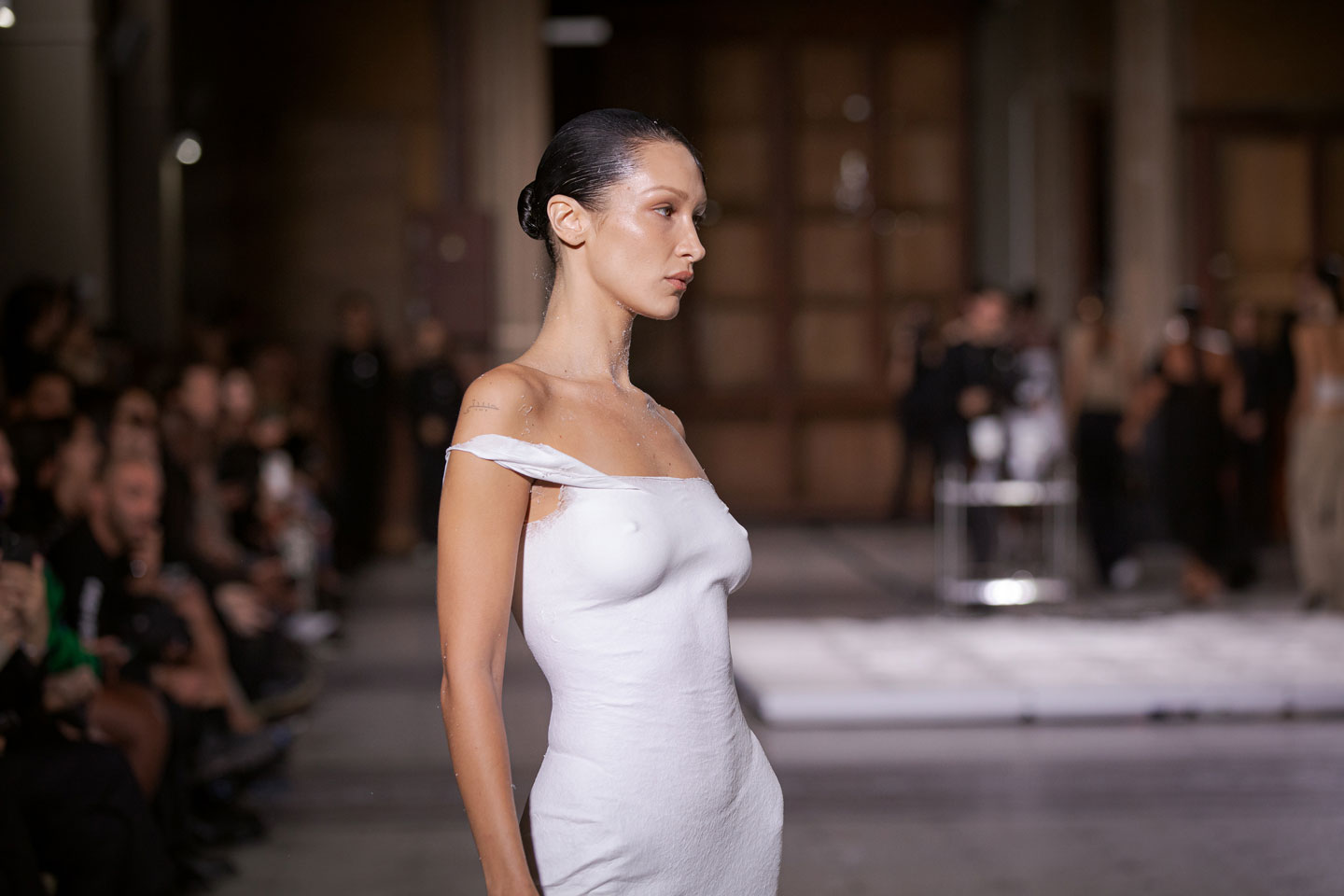 In the 21st century, we should make it the first time that science and design really march together in close step, illustrating in this way their interdependence.

“Spray-on fabric© can be used to make innovative clothes that can be washed, re-worn, and even integrated with diagnostic devices that can monitor the health of the wearer,” Coperni said in an official statement. “The technology consists of short fibres bound together with polymers and biopolymers, and greener solvents that deliver the fabric in liquid form, then evaporate when the spray reaches a surface.” You can also change the fabric’s texture according to the fibres (synthetic and natural, such as cotton, linen, polyester or nylon, as well as recycled) and binder used and how the spray is applied. 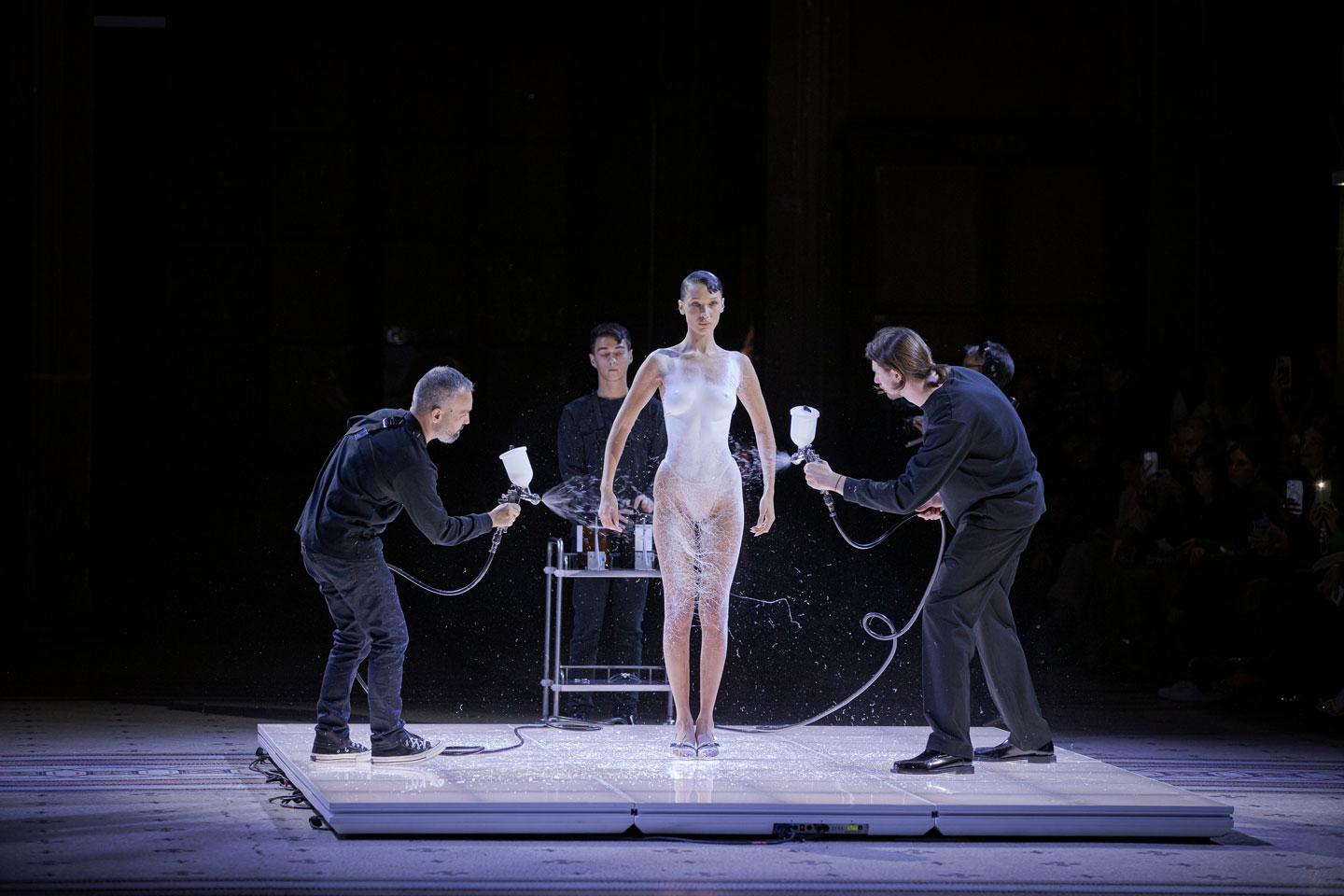 Coperni’s show demonstrated how the boundary between the catwalk and the laboratory is becoming less and less marked. And how responsible and creative innovations are increasingly accessible. In the high-end sector, a wave of acceleration is underway to adopt new technologies, and though the level of adoption is still low, barriers are beginning to fall.

According to a recent analysis released by Bain & Company for the Comité Colbert, the French luxury trade association, the global luxury goods industry is accelerating its adoption of new technologies, with benefits in increased fluidity and transparency of customer relations, operational excellence and reduction of the industry’s carbon footprint. 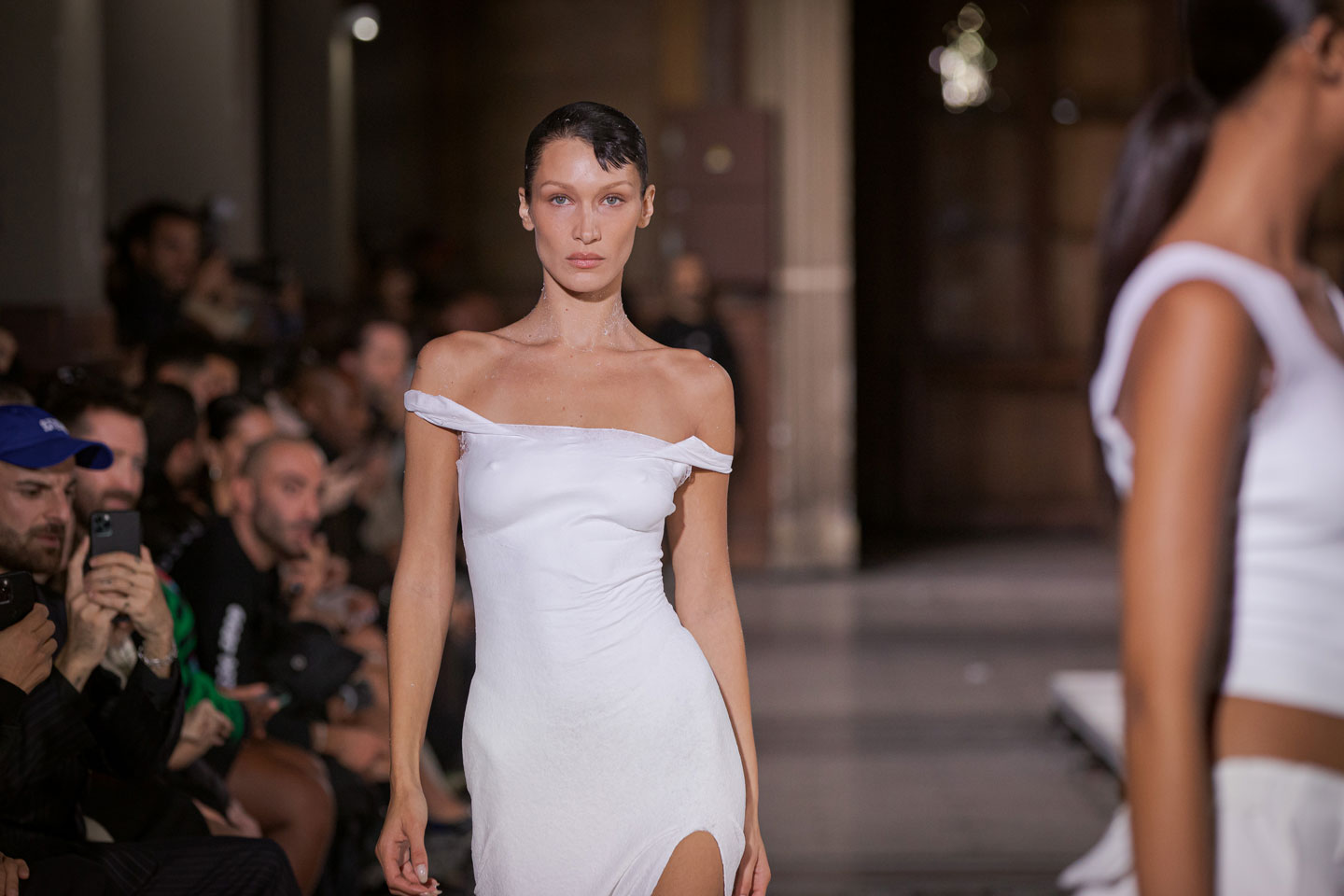 The study highlights that big fashion houses and companies across the industry are testing different technologies or planning to do so in the next three years. And, for some technologies, luxury is now a pioneer. These include biotechnologies, molecular recycling, 3D printing, artificial intelligence and machine learning for process optimisation, augmented reality and virtual reality, automated optical inspection, scanning, 3D imaging, holography, neural analysis, haptic gloves and screens and radio frequency identification.

In conclusion, not only creativity but also sustainability is one of the key objectives. “New technologies are not yet fully perceived as catalysts for reducing firms’ carbon footprint, as companies are also focusing on other action levers. However, experimentations are multiplying at various stages of the value chain, such as the use of biotechnologies to create new eco-friendly materials or manufacturing processes as an alternative to animal materials,” Bain & Company’s experts said. “The adoption of technologies for operational excellence also contributes to accelerating the eco-responsibility efforts of luxury. Anticipation technologies enabling demand to be forecast and stock to be better managed (artificial intelligence integrated into sales forecasts to produce as accurately as possible, virtual twins of operations, etc) have an effect on the environmental footprint by avoiding overproduction, overstocking, overconsumption and waste.” 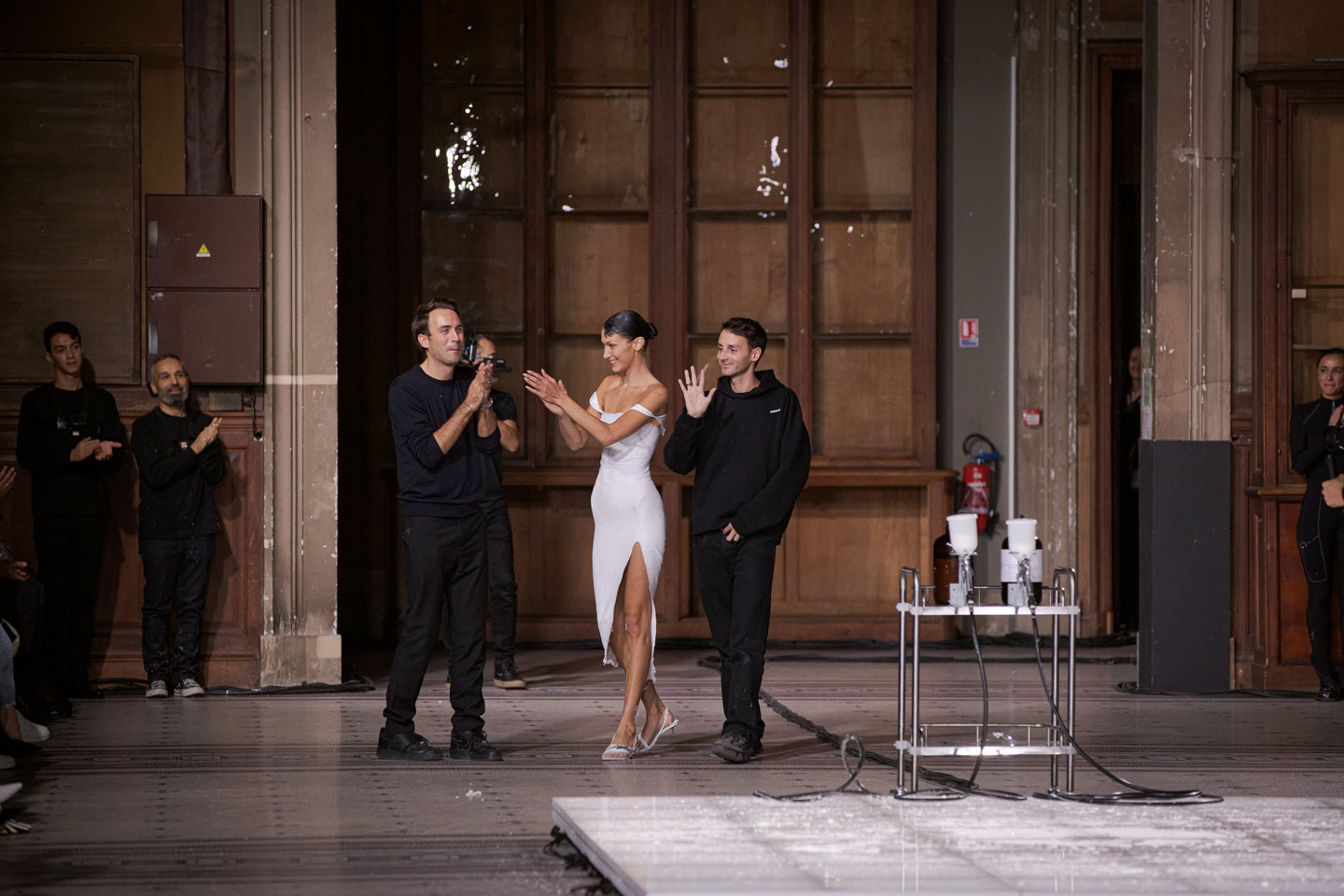