“I like to work with space and emptiness,” Tokyo-based designer Rei Kawakubo once stated in 2000. Among her few but effective statements, this is one of the most powerful as it reveals the true essence of Comme des Garçons (“like some boys”), the brand Kawakubo established in 1969.

“At the heart of her work are the koan mu (emptiness) and the related notion of ma (space), which coexist in the concept of the in-between. This reveals itself as an aesthetic sensibility that establishes an unsettling zone of visual ambiguity and elusiveness,” explained the Metropolitan Museum of Art when they opened the exhibition “Rei Kawakubo/Comme des Garçons: Art of the In-Between” in 2017 to examine nine expressions of in-betweenness in Kawakubo’s collections.

But let’s take a step back and look at Rei Kawakubo’s life before her Comme des Garçons was born. After graduating in philosophy, literature and art history from Keio University, she joined a textile company. In the meantime, with her great interest in fashion, she made an effort to study, learn, and master this field by herself. She started by pursuing fashion skills for herself by working as a freelance stylist while working full time. With love, determination, plus the basic knowledge learned, she could turn many things available to good advantage, which could support the cost of her creative work. 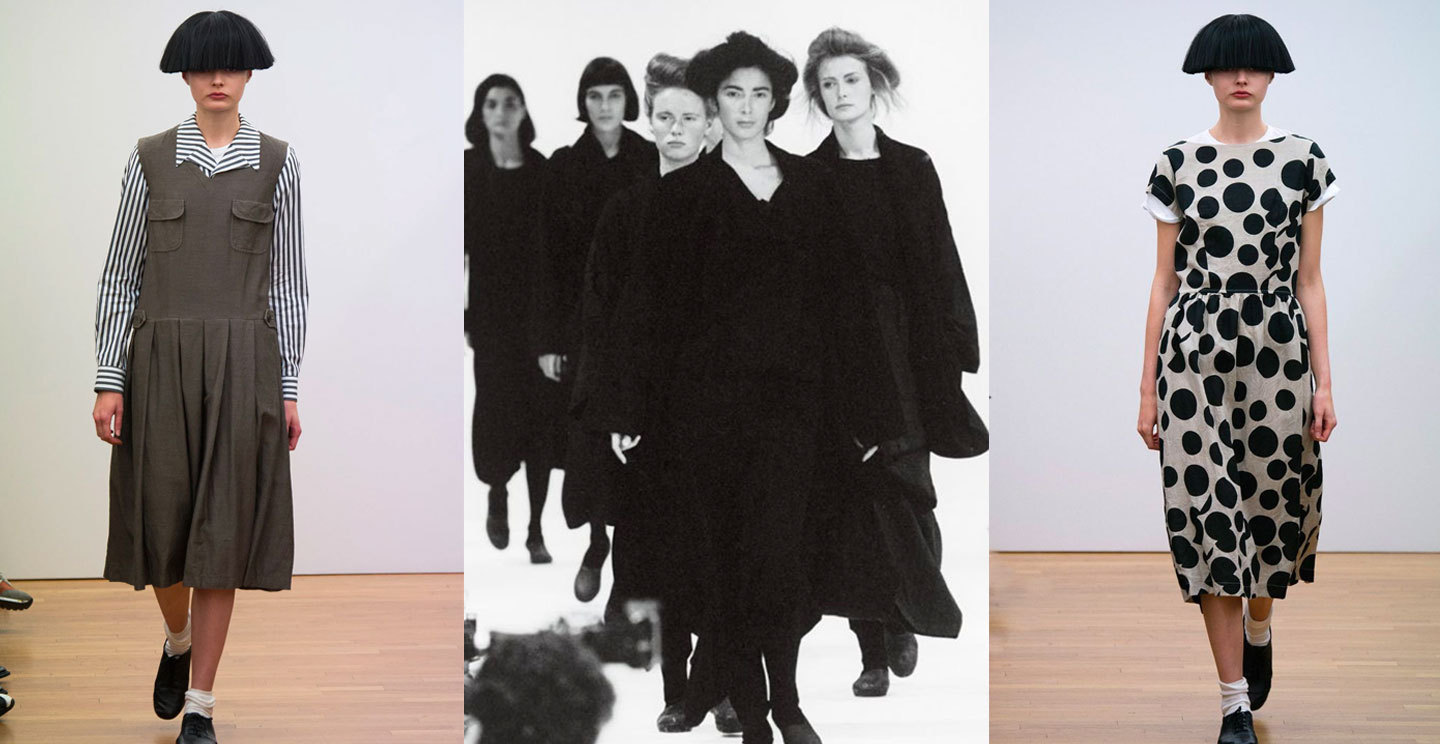 Rei Kawakubo has a profound artistic perspective and can combine art with fashion based on the belief that fashion design work is a presentation of artwork using clothing as a medium. Kawakubo started working as a freelance designer in the year 1967. Later in 1969, she founded the Comme des Garçons label, and in 1973, she set up her own company in Japan, Comme des Garçons Company, Ltd.

The name “Comme des Garçons” comes from Rei Kawakubo’s belief that women should not be expected to wear form-fitting clothes and that there is no need for them to be in high heels. The brand’s portfolio thus eradicates all traditional styles of the existing clothing. Aiming at novelty, Kawakubo emphasises the importance of doing things that have never been done before and always being at the cutting edge.

Rei Kawakubo was also the first Japanese designer to bring a brand from the land of the rising sun to the Paris Fashion Week schedule. Thus, the first Comme des Garçons show presented to the West was held dans la Ville lumière in 1981, featuring Kawakubo’s autumn-winter 1982/83 collection “Pirates”. A consistent black palette, oversized silhouettes and asymmetry exemplify the designer’s work after 1979, when she abandoned her previous references and decided to start from scratch. “The designs elicited extreme reactions from critics owing to their repudiation of the fashionable ideals of the period,” reported the Met.

Black is at the heart of the brand’s DNA as is well known to any fashion enthusiast. Rei Kawakubo describes the use of black in her designs as the colour of resistance. Hence, in all its shades, black has become the trademark of Comme des Garçons with Kawakubo totally changing people’s perspective on this colour. Moreover, when Kawakubo thinks of fashion, she often thinks of navy blue, white and especially polka dots, a pattern she has been associated with since childhood.

“I hate symmetry” is one of Rei Kawakubo’s mantras. Comme des Garçons garments are often irregular: front and back are not the same lengths, and you can hardly find seams that are as we conventionally conceive them to be sewn. Some designs are distorted. Clothing is shapeless. Because of these traits, Kawakubo’s wardrobe is often referred to as “anti-fashion.”

Since her first show in Paris, Rei Kawakubo has become a regular at Fashion Week in the city of lights. She has just made a comeback there with her s-s 23 Comme des Garçons Homme Plus show after a short hiatus of a few seasons due to the Covid-19 pandemic, during which she showed at the Tokyo headquarters initially closed-door and then to a small audience.

With more than 40 years in the fashion industry, Comme des Garçons continues to lead the way and make a difference. Kawakubo also collaborated and often still teams up with famous designers and brands to create special four-handed models for her collections. Her most popular and successful work is probably the partnership with Converse: among the designs in the Comme des Garçons Play line, the customised Chuck Taylor All-Star ’70s have become a highlight. In addition to well-known streetwear brands such as Nike, Novesta and many others, Comme des Garçons’ collaborations are many, but most are rare and collectors’ items. 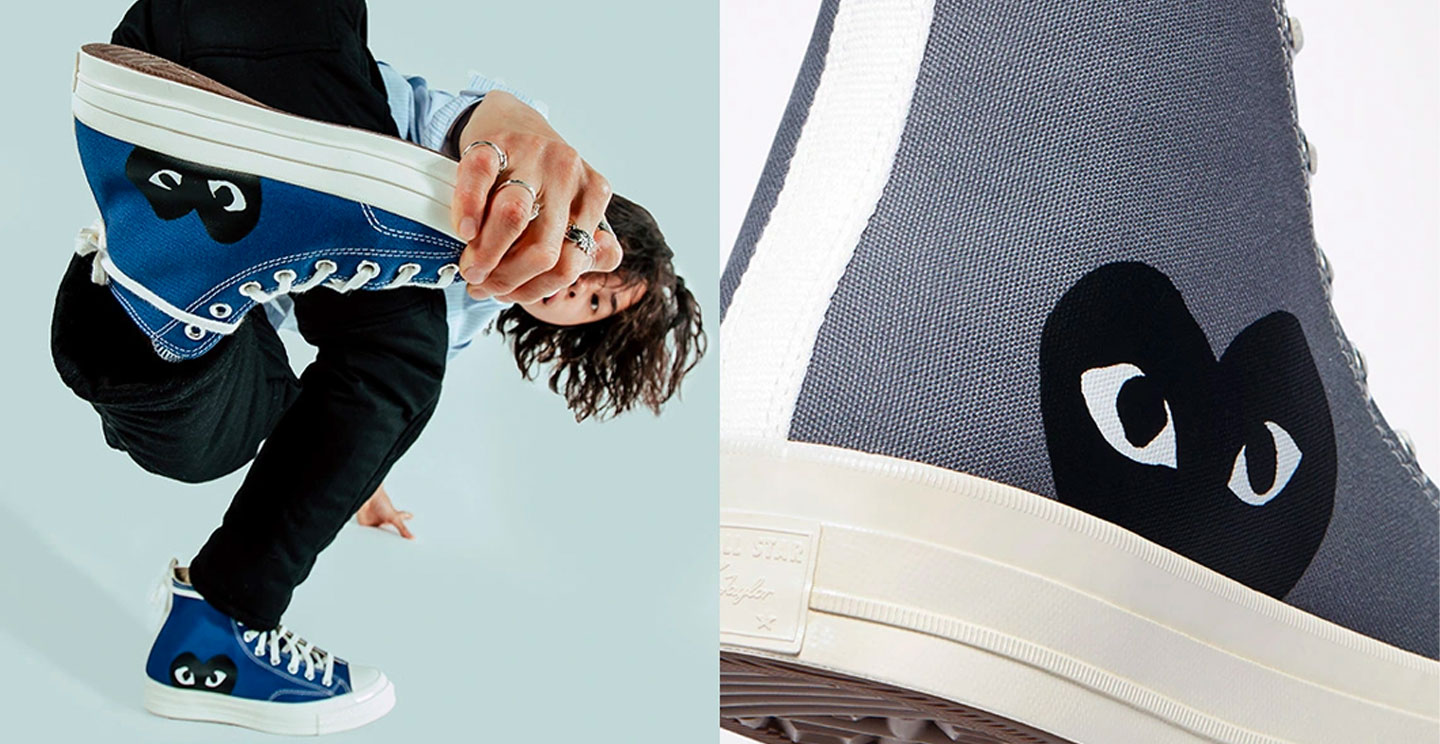 But it is not just a matter of clothes. In 1998, Rei Kawakubo released her most iconic perfume: Odeur 53 by Comme des Garçons, characterised by the absence of initial, middle and final notes. The perfume comprises 53 synthetic scents such as fire, sand, desert, tires, etc. The fragrances created by Kawakubo may seem of an absolute eccentricity and madness, but she manages to scent them in a way that makes them bestsellers. 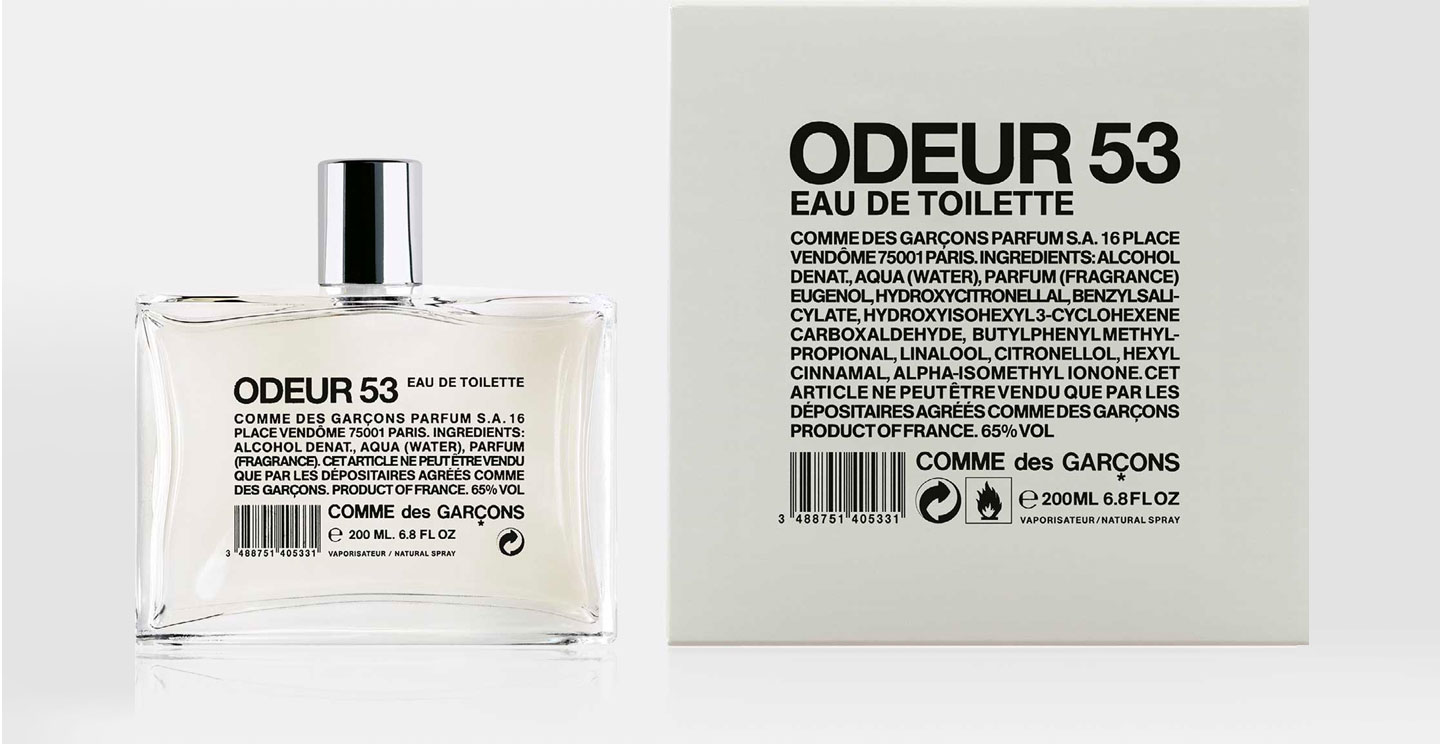 Another business success of Rei Kawakubo and her husband Adrian Joffe is the multi-brand retailer Dover Street Market, which first opened in 2004 in London’s Mayfair district and later expanded to Tokyo, Beijing, Los Angeles, Singapore and New York. Lexington Avenue in NYC is the flagship location of Dover Street Market, conceived as a huge space that sells new, conceptual and trendsetting brands and houses other big names such as Gucci, Balenciaga and many others. 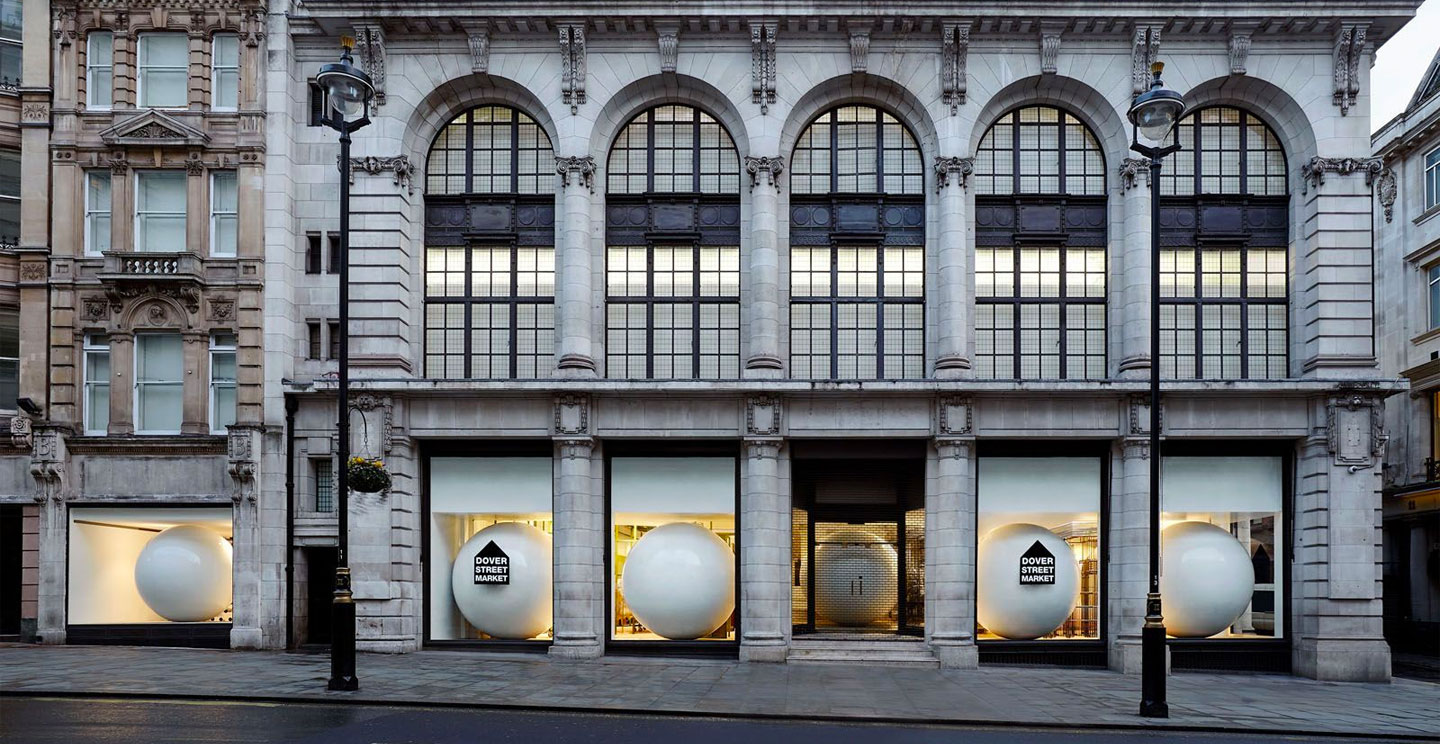 As anticipated, in 2017, Rei Kawakubo had the privilege of exhibiting her Comme des Garçons creations in what is possibly the world’s most famous fashion museum. She became the first living designer in 36 years to be honoured since Yves Saint Laurent in 1983.

The theme of this major retrospective at the New York Met was “Art of the In-Between,” conceived as a journey to convey Rei Kawakubo’s design work from her first collection to the present day while revealing how her unique approach to fashion occupies the spaces between these dualities: Absence/Presence; Design/Not Design; Fashion/Antifashion; Model/Multiple; High/Low; Then/Now; Self/ Other; Object/Subject; and Clothes/Not Clothes.

With over 150 works on display, each piece was presented not just as a wearable or a mere fashion item but as something that truly reflects who Rei Kawakubo actually is, as well as her beliefs and spirit. It is no wonder that people worldwide recognise and praise her as the designer of the century. 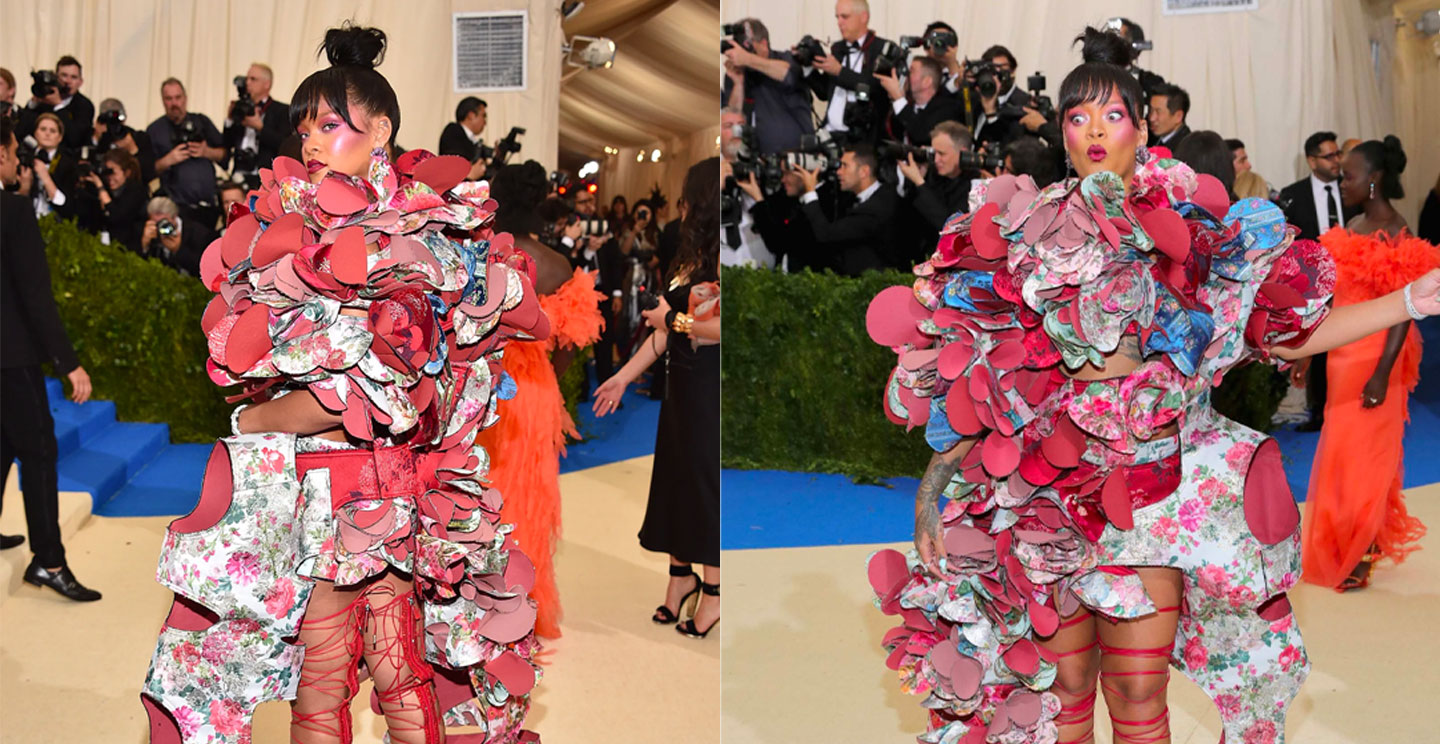