In recent years, fashion has witnessed a new creative wave of Chinese designers showing their work within the established system of Western fashion weeks – the so-called Big Four in New York, London, Milan and Paris – to enhance their status as Chinese design collectives. Meanwhile, “the rise of China’s fashion weeks in Shanghai, Beijing and Shenzhen, as well as mushrooming multi-brand boutiques across the country, has created a strong sense of momentum,” as Vogue reported. Fuelling the buzz around Chinese fashion, a growing number of emerging talents from the Land of the Dragon have started to enjoy greater global recognition and a surge in sales. But where do these talents bloom? Of course, in the country’s top fashion schools.

That’s why we gathered insights from Istituto Marangoni Shanghai students as up-and-coming designers and stylists, plus statements from the school’s top players who enhanced these emerging creatives with the opportunity to present their work as part of ZETA, IM Shanghai’s latest graduate fashion show. 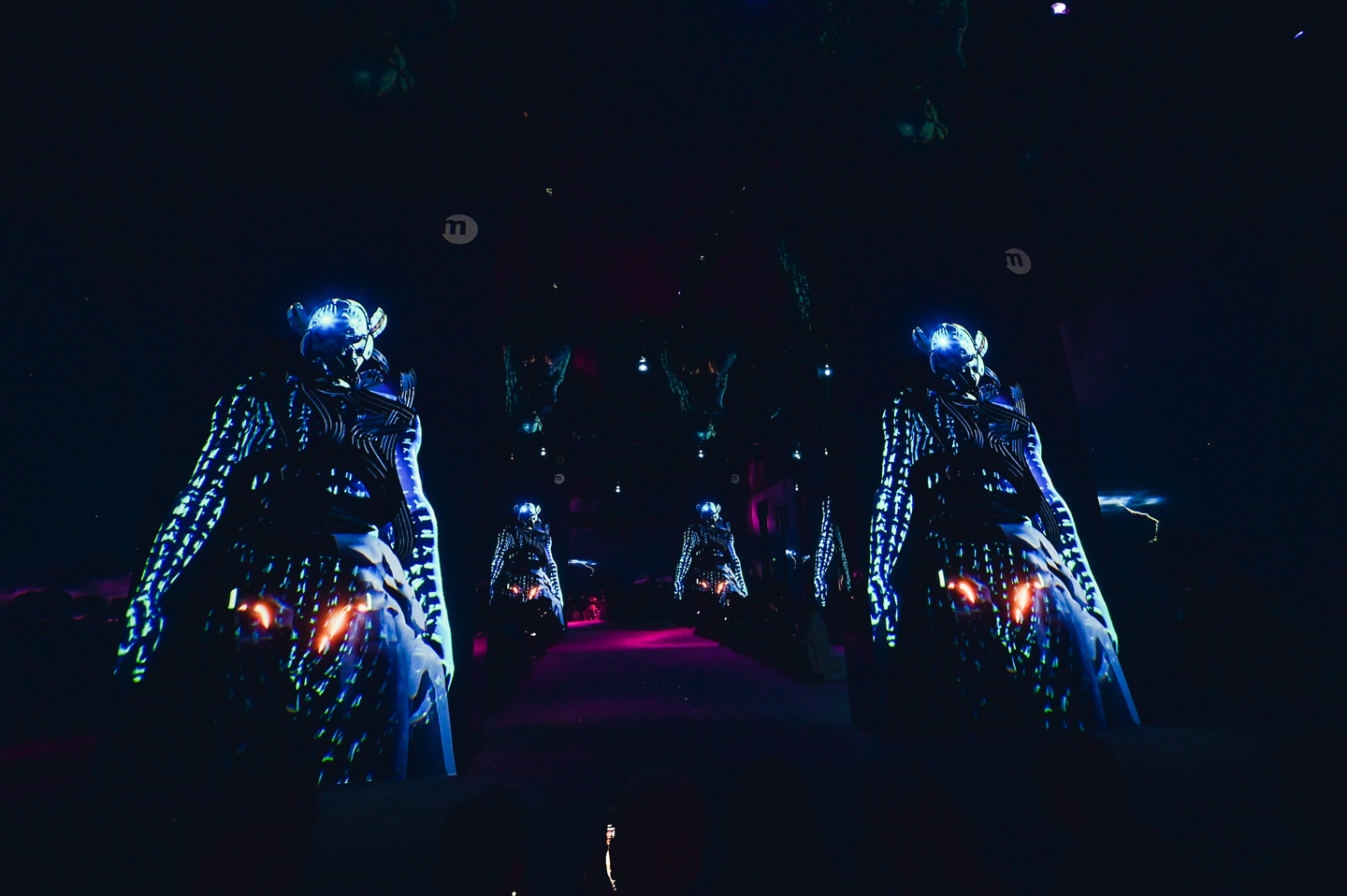 With the 3D CGI (Computer Graphic Imagery) film “ZETA 3022” presented before the “ZETA” 2022 Best Graduate Show, the most innovative runway show was set on the Bund skyline river, inside the futuristic setting of the Temple of Light. There, 36 looks from 12 collections were presented on a physical catwalk, all inspired by the concept of Chemical. “We decided to give them all a common theme in March, but it was a trick because Chemical is not really a theme; it is so open to interpretation and can basically mean anything. A fabric and a virtual garment are both Chemical,” said Kristian Steinberg, Fashion Design Programme Leader at Istituto Marangoni Shanghai. 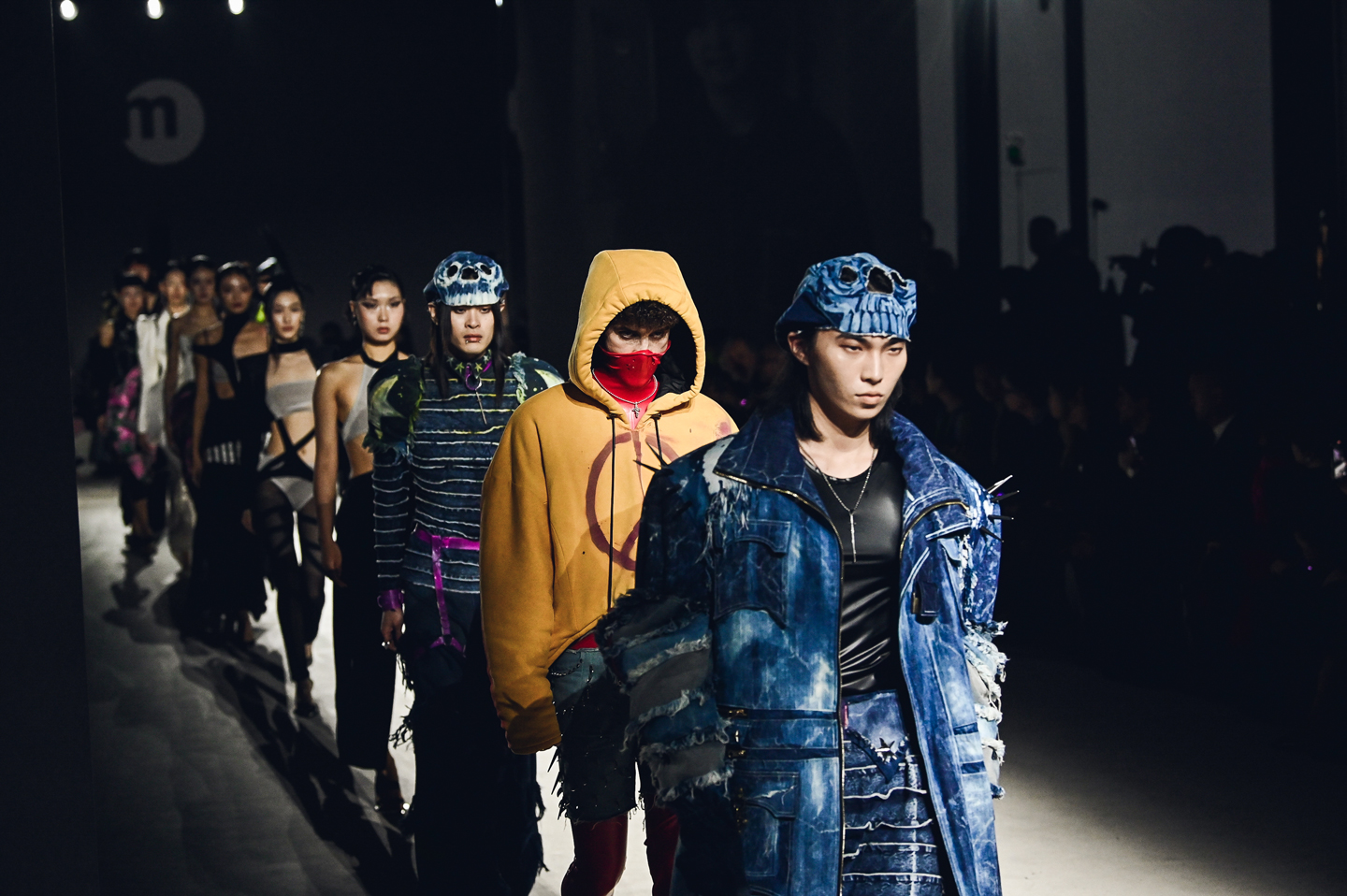 “Stars fuse lighter elements into heavier ones, and when they collapse and explode, they disperse atoms that can make complex matter through the universe. We and everything around us are made from star matter that originated in a distant supernova a long time ago,” continued Steinberg. “Our bodies are covered in sensors that inform our brains about what we see, touch, hear, smell and taste, and to help us decide whether the sensation is good or bad, an emotional response is triggered.”

Kristian Steinberg also considered how we feel emotions about everything we experience, and each feeling triggers a chemical reaction that can make us happy, sad, excited or even anxious. “Fashion designers make products that have a unique relationship to the user,” he said. “They create items that embrace and touch the wearer and become symbiotic with their body. It is a delicate and profound relationship between a person and an object that some describe as a second skin.”

What about the future possibilities? How can clothing augment our experience of the world, or how can it protect us from future hazardous environments? Will clothes allow us to explore places that are hostile to humans or to make us happy when we are sad? “Explore the possibilities and opportunities of future clothing by focusing on the human experience and the environment,” Steinberg suggested to the emerging designers at Istituto Marangoni Shanghai.

Some students came up with an accurate yet surprising creative response. “I enjoy designing real clothes, and I’m not interested in virtual fashion yet, but it’s thanks to CLO 3D that I can really visualise my ideas,” said Istituto Marangoni Shanghai talent Liu Yuijia, one of the only two menswear designers featured on the catwalk. “I need to visualise my ideas immediately, as I studied Fine Arts in high school, and my collection is inspired by the stories my father used to tell me about war zones when I was a child. When I heard that Istituto Marangoni was one of the first schools to embrace digital tools for fashion design, I thought that was a visionary approach.” 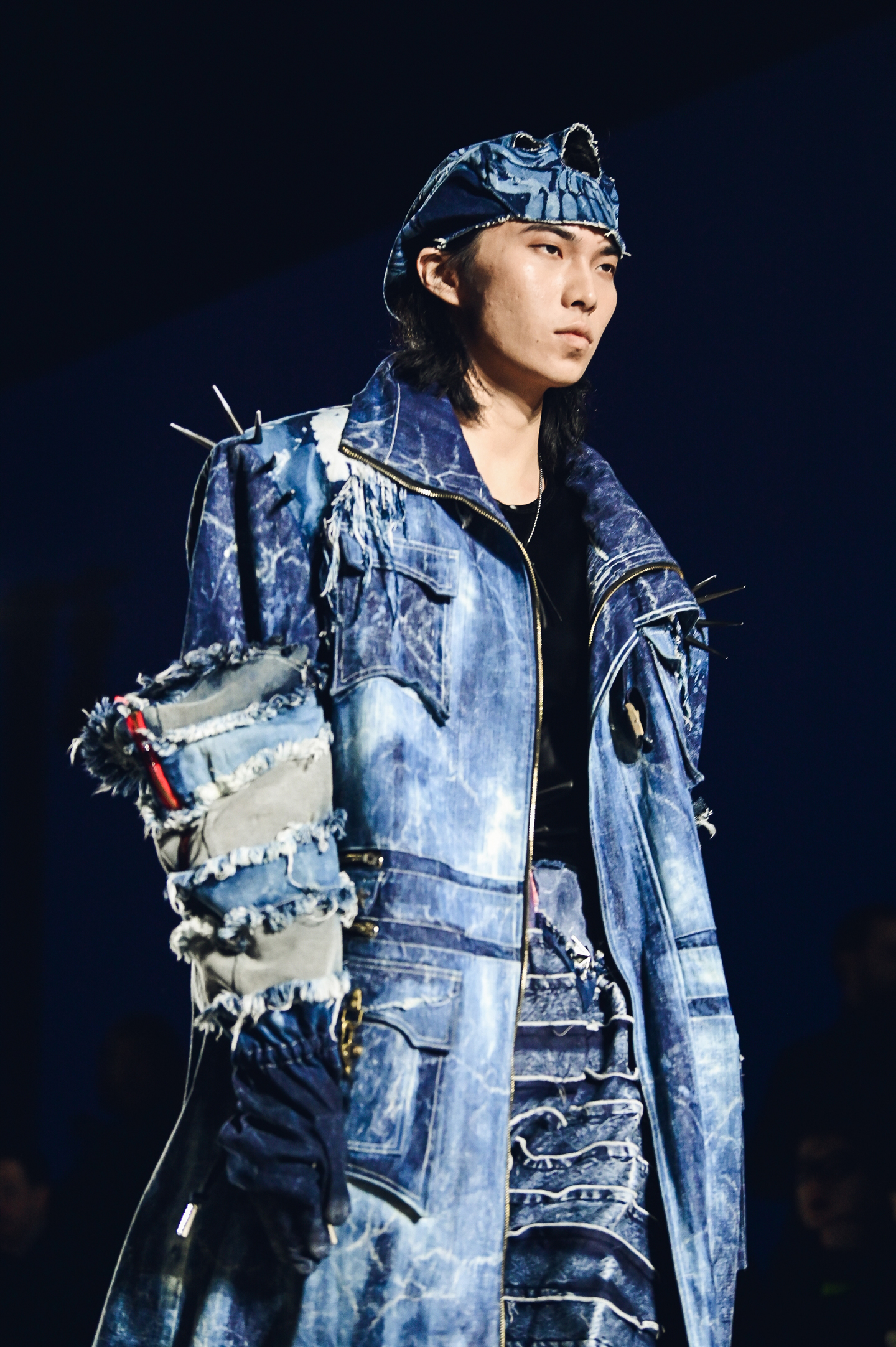 Her creations were joined on the catwalks by pieces by Sun Ziqing, Tang Yishan, Sun Haoyue, Huang Qi, He Sitong, Shen Xueyan, Wu Xinyu, Zhou Bingyi, He Haoliang, Lin Jing and Geng Minmin. Inspired by the four concepts of “The Origin,” “Dystopia,” “Dune”, and “Rebirth,” their collections were presented under names such as “1m2 of Air,” “Imperfect beauty,” “Metamorphose,” and “2Na + 2H2O release”. Viewers were immersed in a fashion journey across time and space.

When it came to nominating the Best Designer of the Year 2022, a jury of tutors and industry insiders awarded Sun Haoyue with her “Degeneration” collection combining randomly generated patterns and sharp geometries. “It’s all about chaos and order,” Sun Haoyue said. “Contradiction is innate in our DNA and finds field and roots in all civilisations.”

Last but not least are the thoughts from the first-year students who took part in the fashion show as backstage dressers. They shared the same enthusiasm with the designer while working under the guidance of Istituto Marangoni Shanghai’s top styling graduates, Pen Yifang and Chen Chuyi, who oversaw all the grooming and accessory concepts for the 36 looks presented on the catwalk. 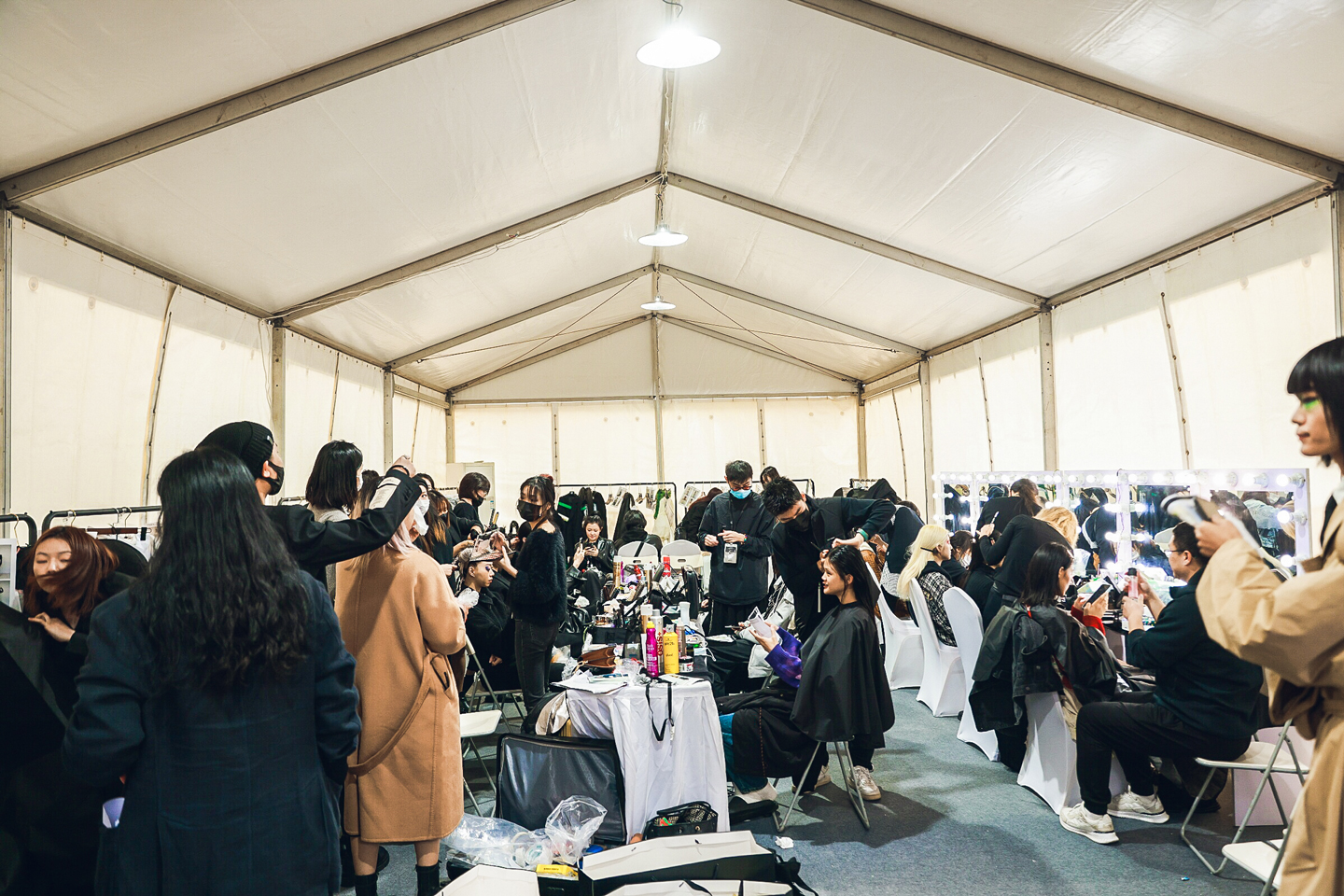 “I feel the greatest joy in fashion styling is connecting with creative people, designers and brands,” said Pen Yifang, a Fashion Styling & Creative Direction graduate. “In this show, I was focused on styling the designers’ ready-to-wear. I was inspired by the fabrics they used, as well as some highlights of their styles, the colours they chose, and many other elements. The goal was to put the icing on the cake to the overall impression of the catwalk. As I worked on the theme of “Rebirth,” I used more natural elements to mark that part of the presentation.” 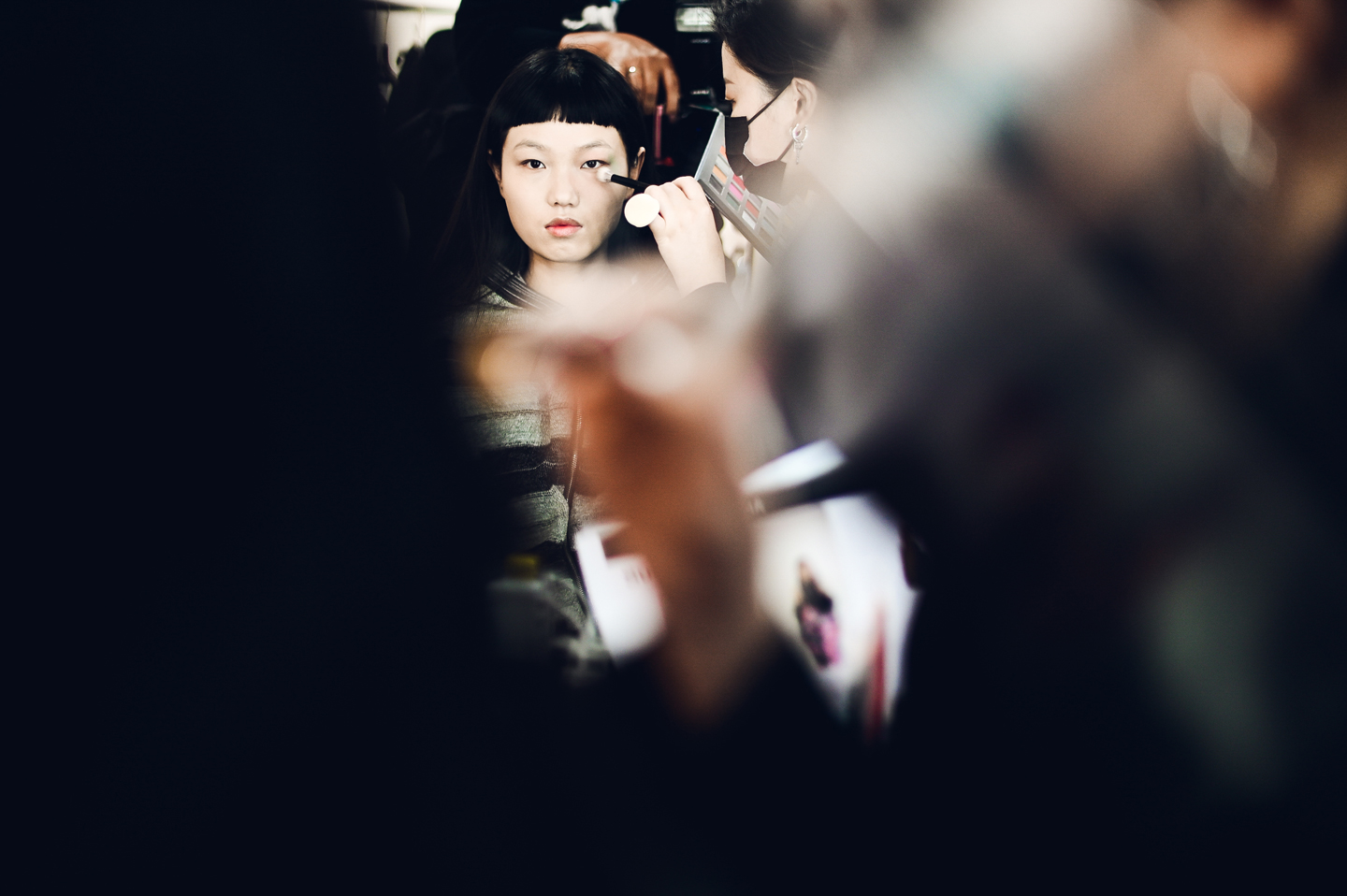 “After attending this fashion show, I began to understand how the fashion industry really works. It made me think a lot and made me love fashion even more,” stated Zhang Xiangyutian, a first-year fashion design student at Istituto Marangoni Shanghai. “I’m so curious to see what lies ahead because I really hope to be selected when my graduation time comes,” Zhang Xiangyutian concluded.