Richard Avedon, the man who brought fashion into fine art

MILAN, ITALY - Milan is both a fashion capital and an international art capital. Until 29 January 2023, the city is hosting the “Richard Avedon: Relationships” exhibition at Palazzo Reale in Piazza del Duomo. The exposition, tracing a career spanning more than 60 years, features one hundred and six images from the collection of the Center for Creative Photography (CCP) in Tucson (USA) and the Richard Avedon Foundation (USA). 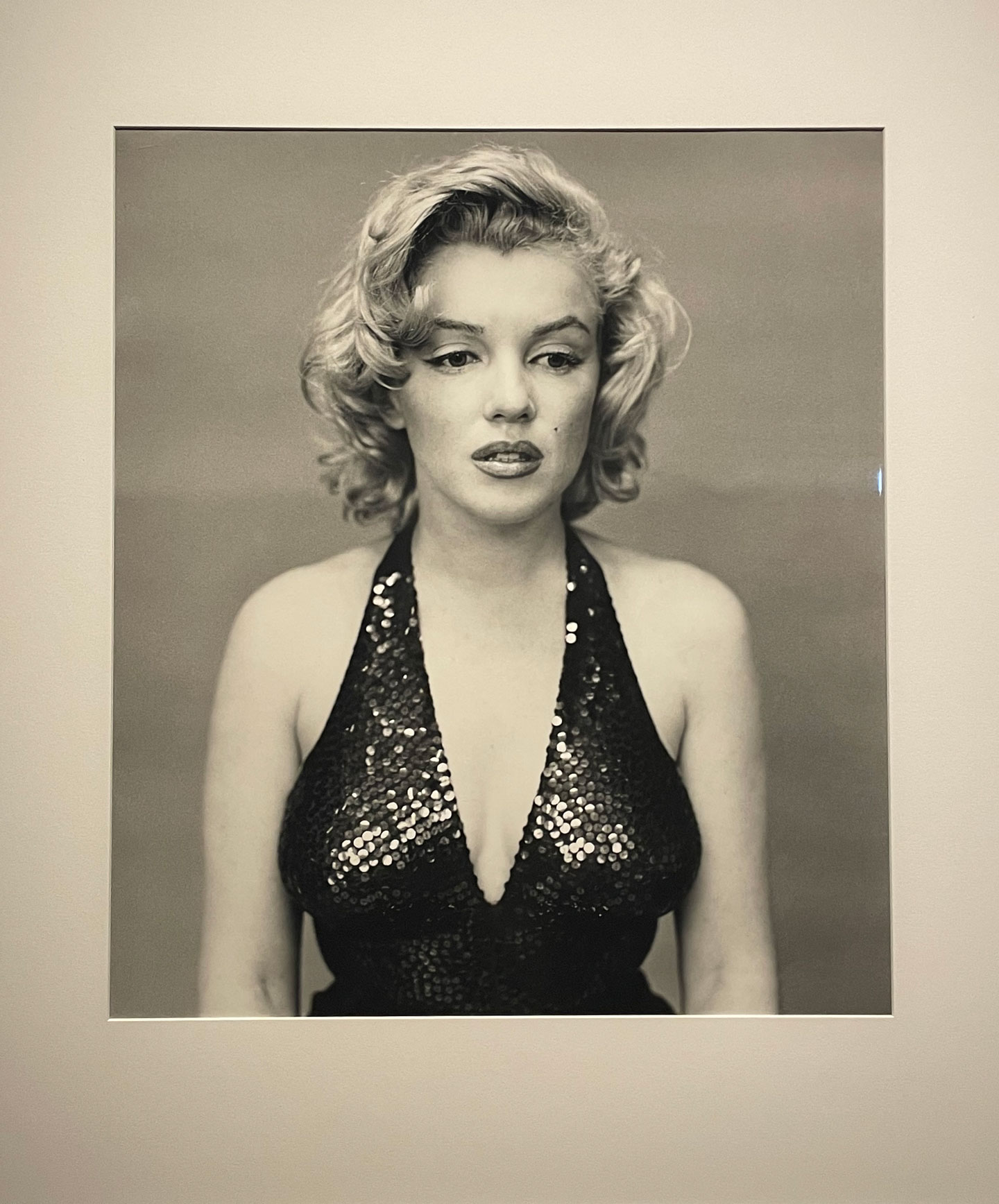 American photographer Richard “Dick” Avedon (New York City, 1923 – San Antonio, Texas, 2004) produced a lifetime of iconic images in fashion and portraiture. During his early years as a photographer, Avedon made his living primarily through work in advertising. However, his real passion was the portrait and his ability to express the essence of subjects. As his notoriety grew, he had the opportunity to meet and photograph celebrities from different disciplines, such as Marilyn Monroe, the Beatles, the British Royal Family, fashion models and many others. Throughout his career, Richard Avedon maintained a unique style that brought a sense of sophistication and authority to his portraits. His approach enhanced his ability to put his subjects at ease in front of the lens, helping him to create true and lasting photographs.

The “Richard Avedon: Relationships” exhibition is curated by Rebecca Senf, Chief Curator of the Center for Creative Photography collection, where Avedon placed an unprecedented number of photographs between 1989 and 2004 (the year he passed away) to represent his expansive body of work. 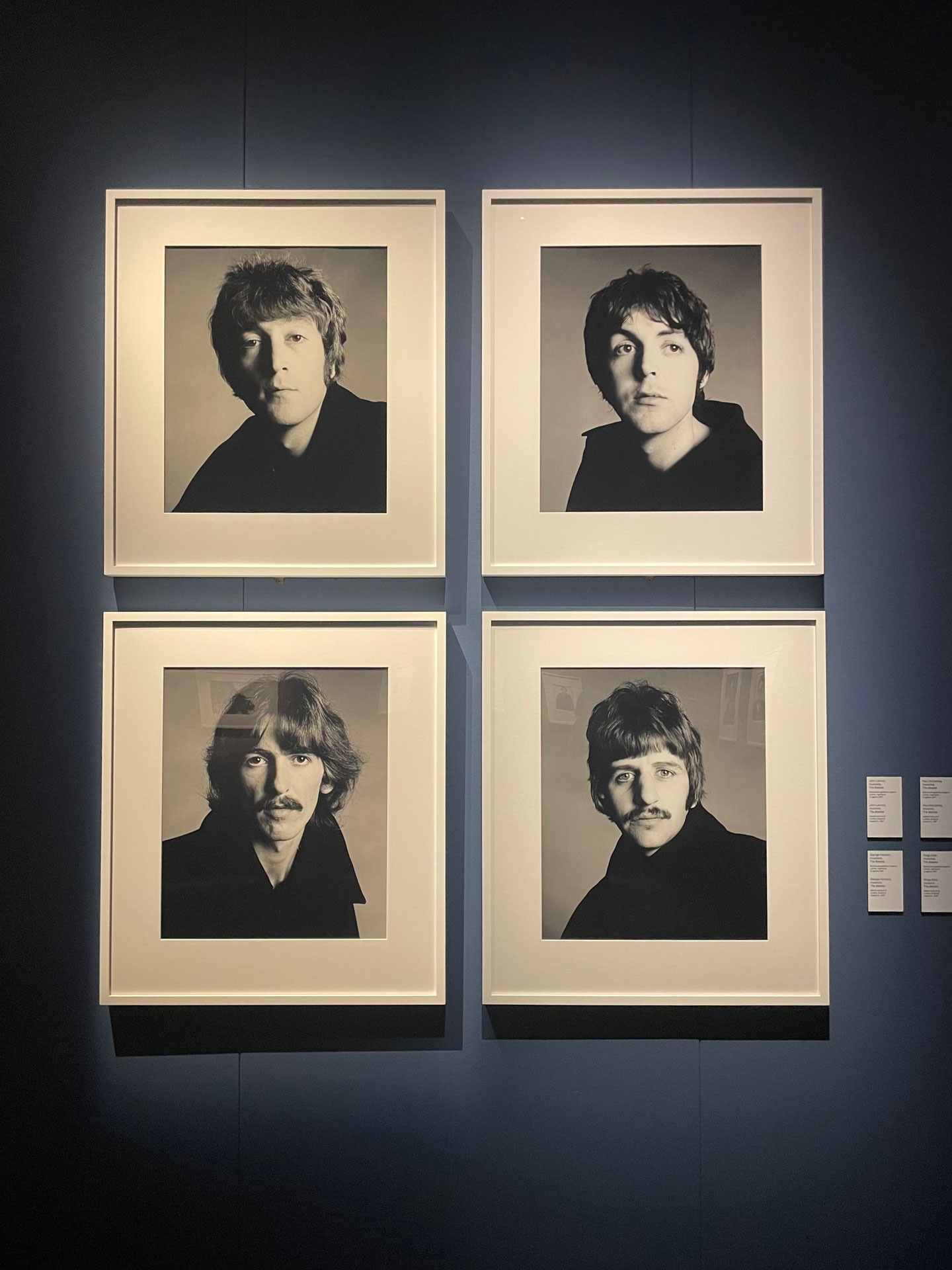 Guiding you through the life of one of the greats of 20th-century photography, the exhibit displays Richard Avedon’s shots from his early and late fashion years, as well as portraits of artists, performers and politicians. With Italian fashion house, Versace as the exhibition’s main partner, the last section is dedicated to the collaboration between Richard Avedon and Gianni Versace. 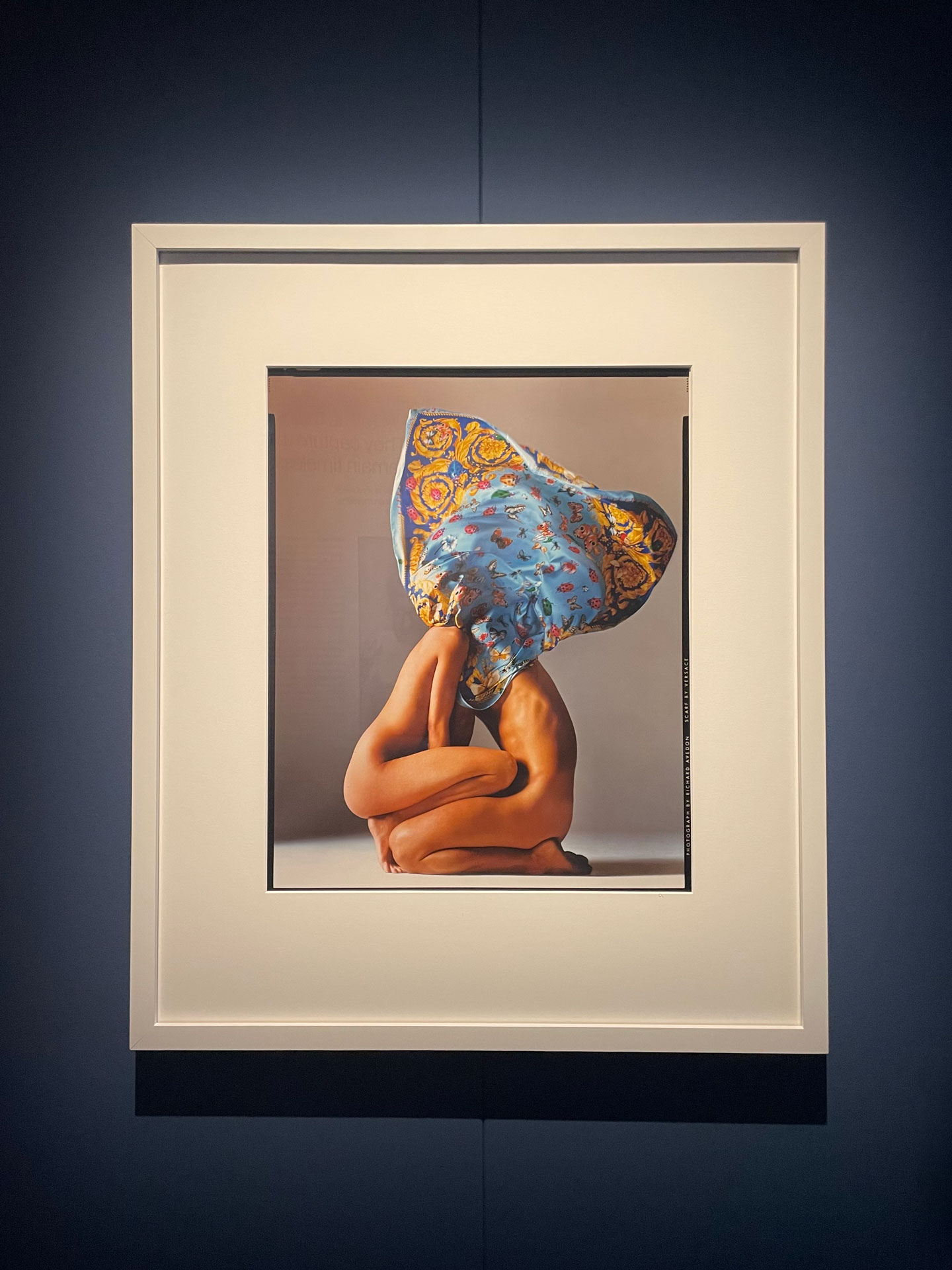 When it comes to the show set up at Palazzo Reale, Richard Avedon’s works are displayed on walls of different colours that make both black and white, and colour works stand out, despite the soft lighting in the various rooms. Avedon’s portraits are perfectly lit thanks to white spotlights strategically placed around the photographs to enhance the beauty and essence of his work. 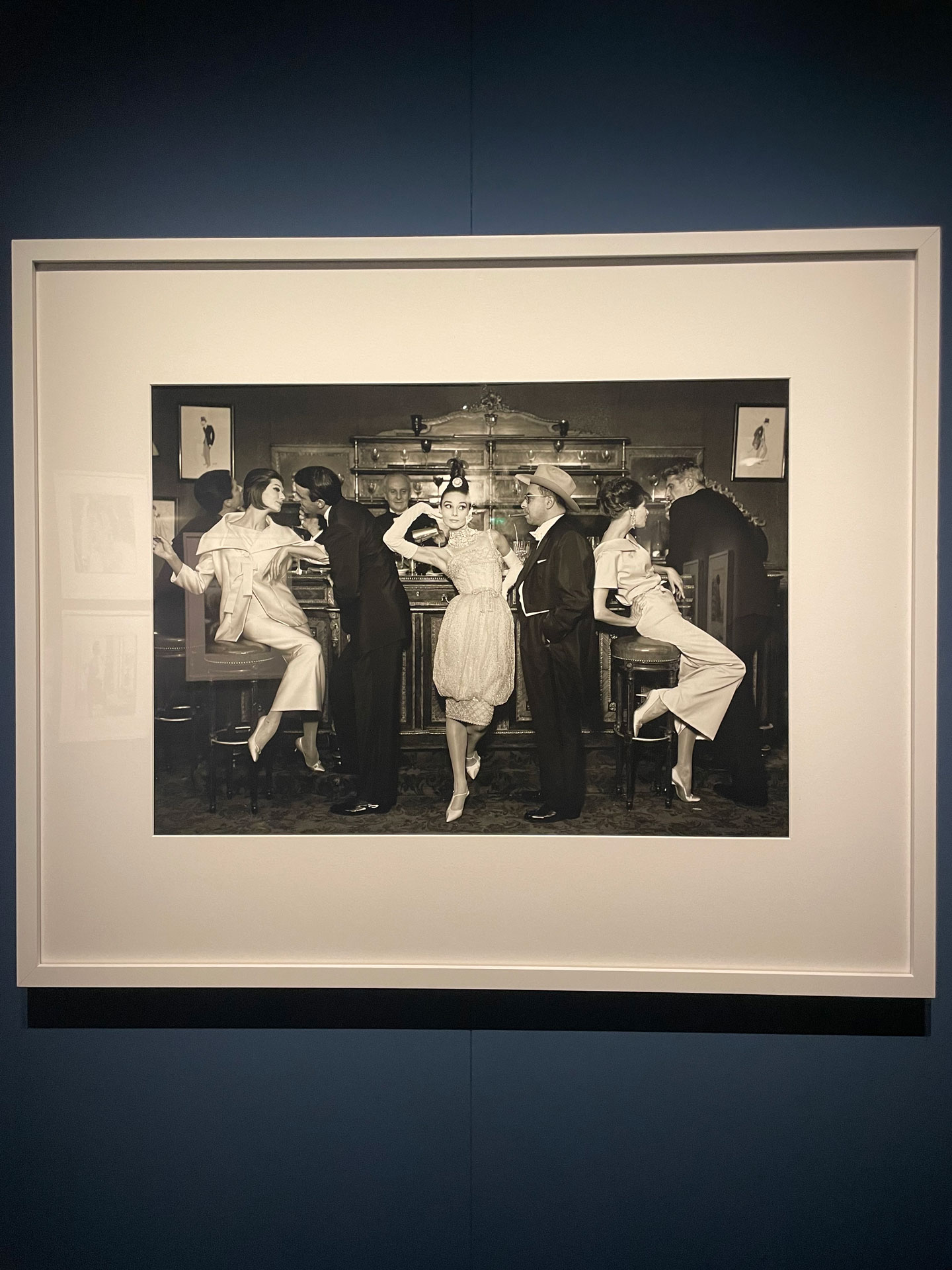 “Richard Avedon: Relationships” explores two main ideas. The first is how multiple photographs of the same subject reveal aspects of Avedon’s process or qualities of their relationship. The second is how portrait and fashion images shift when Avedon includes more people in one frame to convey the relationship the figures have with one another.

The allure of Richard Avedon’s photographs certainly lies in their subjects. Although magazines often asked him to create portraits of celebrities, he was deeply interested in portraying everyday Americans, whose lives he felt were equally worthy of representation. “I am always stimulated by people. Almost never by ideas,” Richard Avedon repeated. 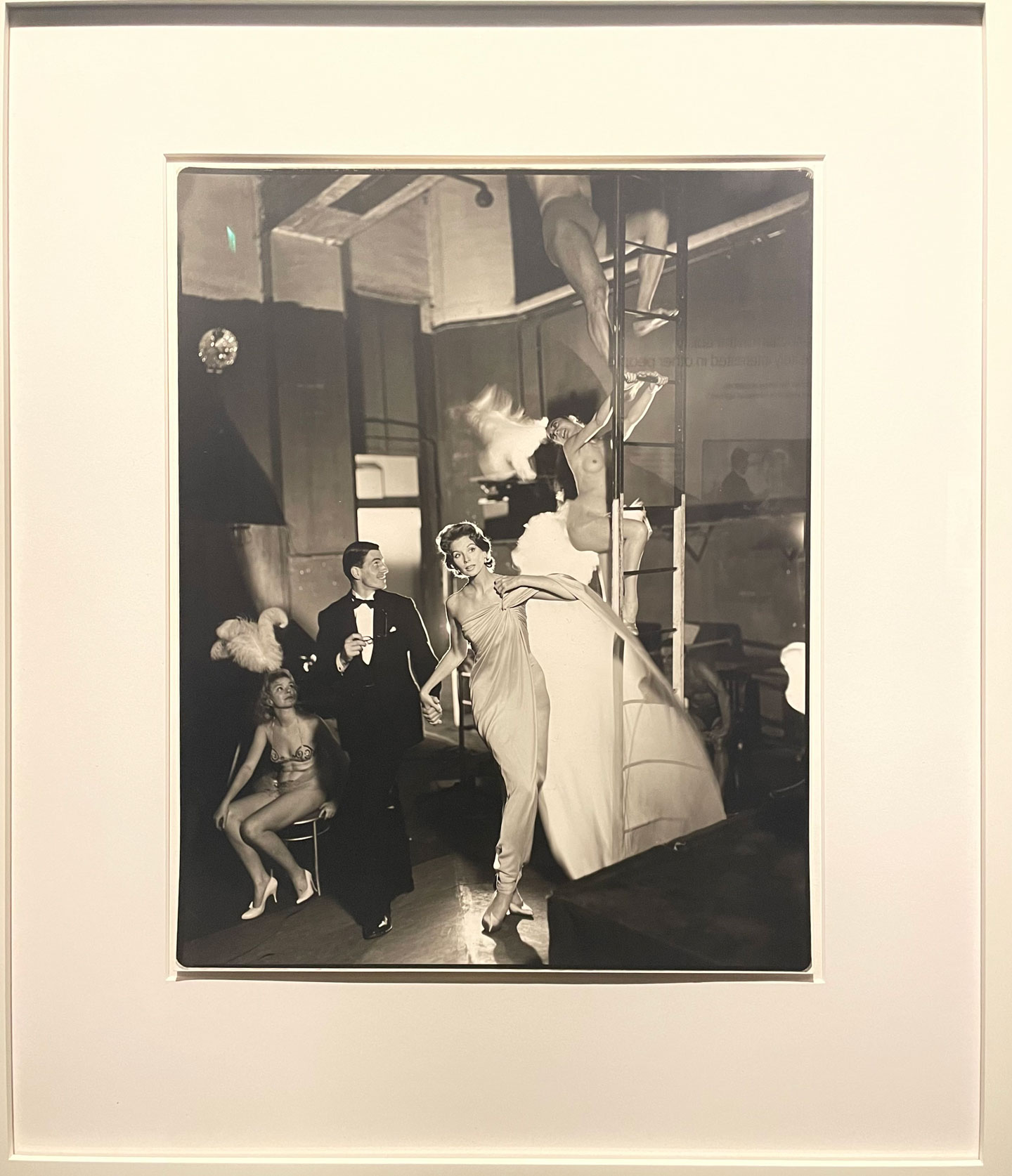 Peculiar is that Richard Avedon constructed a visual narrative expressing the relationship between fine art and fashion, two disciplines with a shared purpose, that of interpreting and being part of contemporary visual culture. 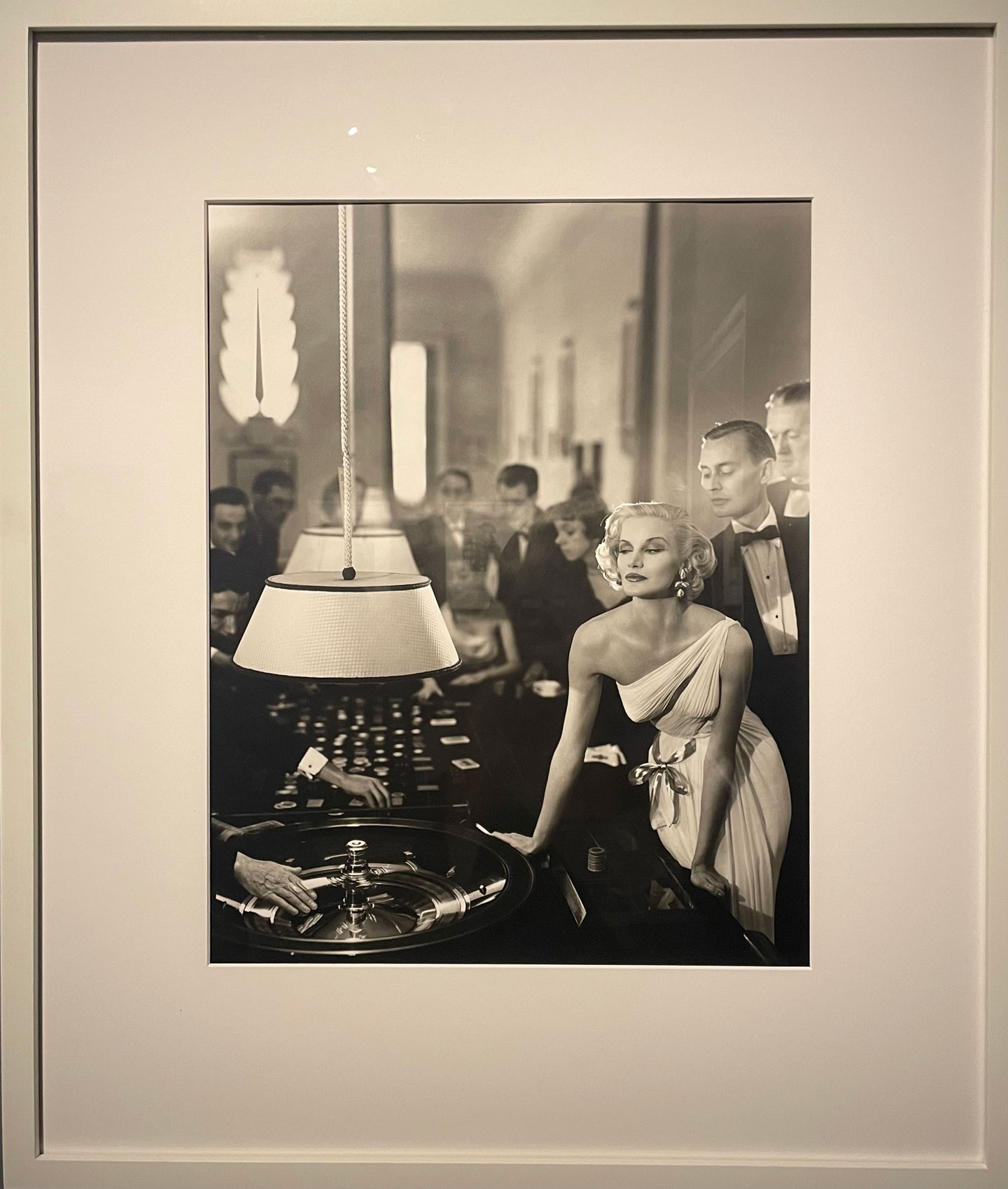 As we know, fashion and art have gone hand in hand throughout history. In 1965, Yves Saint Laurent was inspired by Piet Mondrian’s painting; in 1991, Gianni Versace was inspired by Andy Warhol’s Marilyn Monroe. Richard Avedon did the exact same thing but added his style and original touch to his work. Thanks to his unique creativity, Avedon became the author of a series of legendary fashion photographs, which helped define a new role of the photographer in creating fashion fantasies.

One of Avedon’s most celebrated works is Dovima with Elephants, Evening Dress by Dior, Cirque d’Hiver, Paris 1955, originally appeared in a 14-page story on Parisian fashion published in the September 1955 issue of Harper’s Bazaar (where Avedon was staff photographer from 1946 to 1965). Shot at the Cirque d’Hiver with Dovima (born Dorothy Virginia Margaret Juba) wearing a dress designed for Dior by the then-19-year-old Yves Saint Laurent, this image caught the eye of Gianni Versace.

But let us take a step back to give a better overview. The “Richard Avedon: Relationships” exhibition is divided into ten sections: The Artist, The Premise of the Show, Early Fashion, Actors and Directors, Visual Artists, Performing Artists / Musicians and Writers / Poets, Avedon’s People, Politics, Late Fashion, Versace. However, it is all about the two most distinctive aspects of Avedon’s work: fashion photographs and portraits.

Touring Palazzo Reale, visitors can ideally group Avedon’s fashion shots into two periods of his life and career: before the 1960s, when the models followed precise storytelling along with the location, and his late shots belonging to the second period, in which he focused exclusively on the model and outfits by using minimalist backgrounds and moving poses to emphasise the dynamism of fashion. 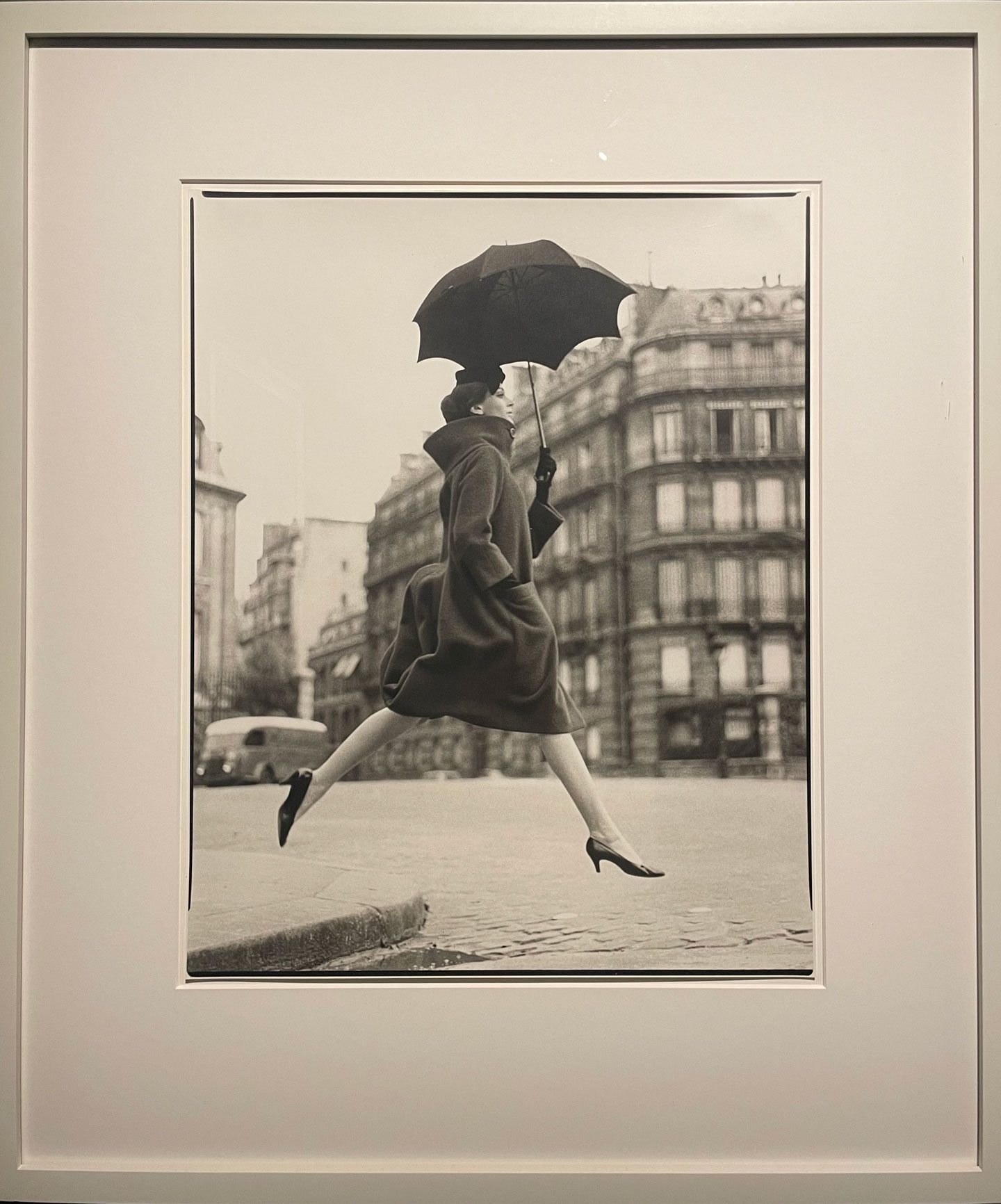 As proof of this, when Richard Avedon shot Carmen (Homage to Munkasci) in 1957 to showcase a couture collection for Harper’s Bazaar, he focused on model Carmen Dell’Orefice in mid-jump by centring her in the frame. Her buoyant mood and graceful leap express a sense of contentment. “I wanted it to be triumphant,” Carmen Dell’Orefice once said. “I wanted to prove that Dick could use me as effectively as he had my predecessors like Dovima and Dorian Leigh.” 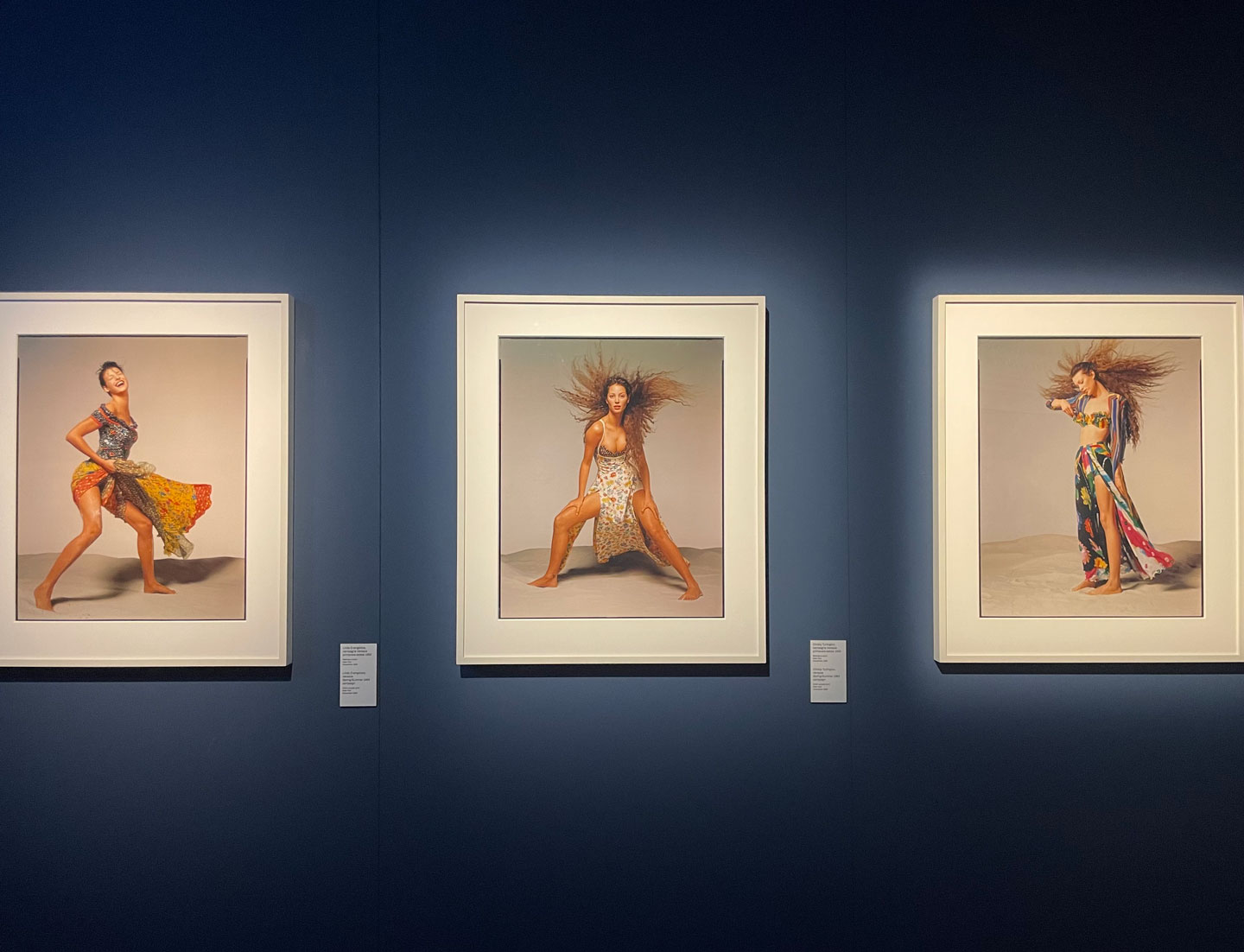 The last room is one of the most charming sections of the exhibition “Richard Avedon: Relationships”, dedicated to the collaboration between Richard Avedon and Gianni Versace. The creative liaison began with the campaign for the spring-summer 1980 collection, which marked the designer’s debut and continued to Donatella Versace’s first spring-summer 1998 collection. One of the highlights of this connection is a shot of Linda Evangelista wearing Versace’s spring-summer 1993, here to prove how photography can make a difference in communicating the avant-garde of fashion. 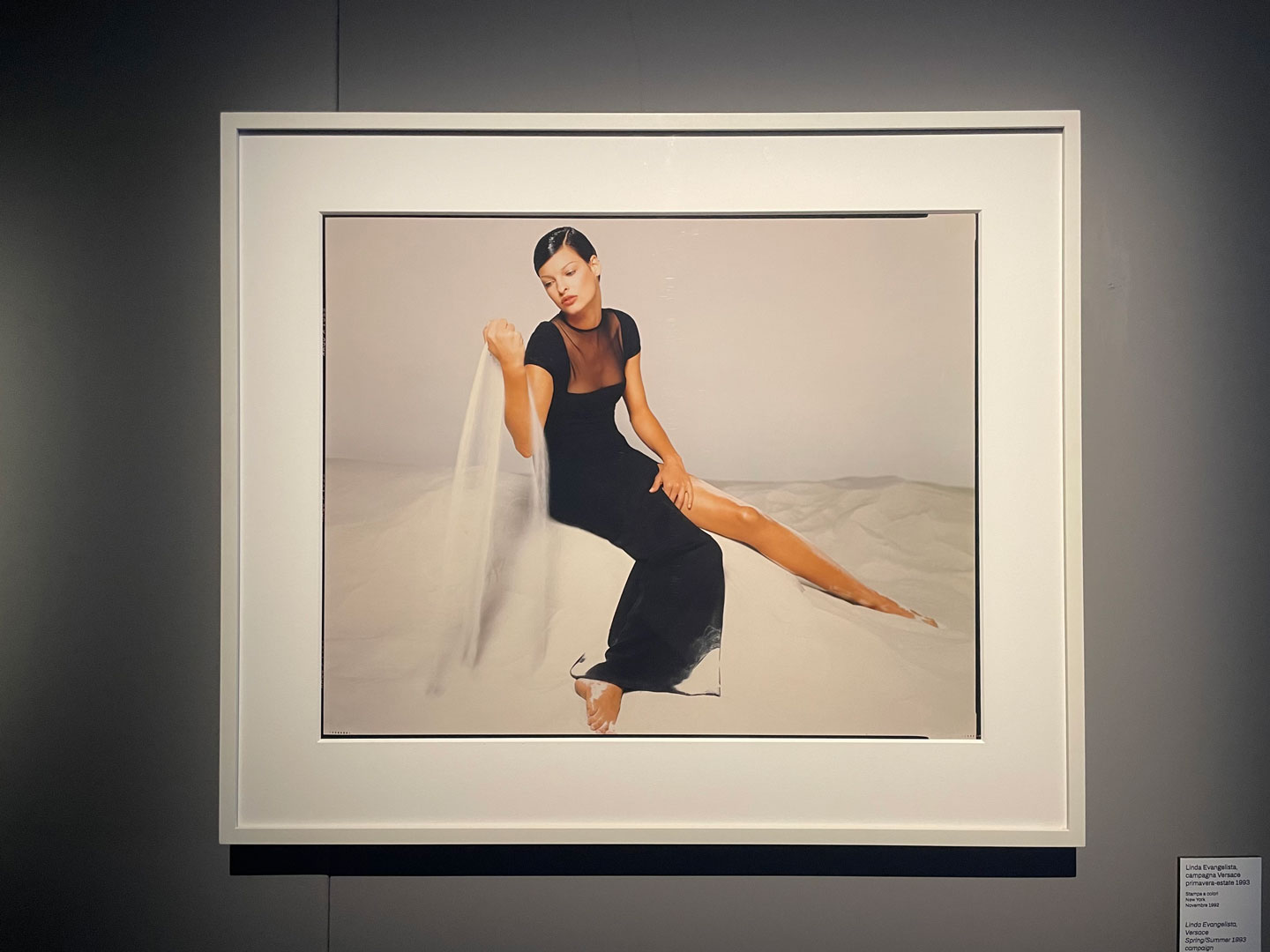 “Looking at Richard Avedon’s images, you can understand the real meaning of the word ‘iconic’,” said Donatella Versace in an interview shown at the exhibition. “To truly understand what it means, you must look at Avedon’s photos.” She added that Gianni and she both intended photography as an art form and thought that no one could celebrate and bring clothes to life better than Richard Avedon. “That’s what artists do,” Donatella said. “It was not just photography; it was art.” 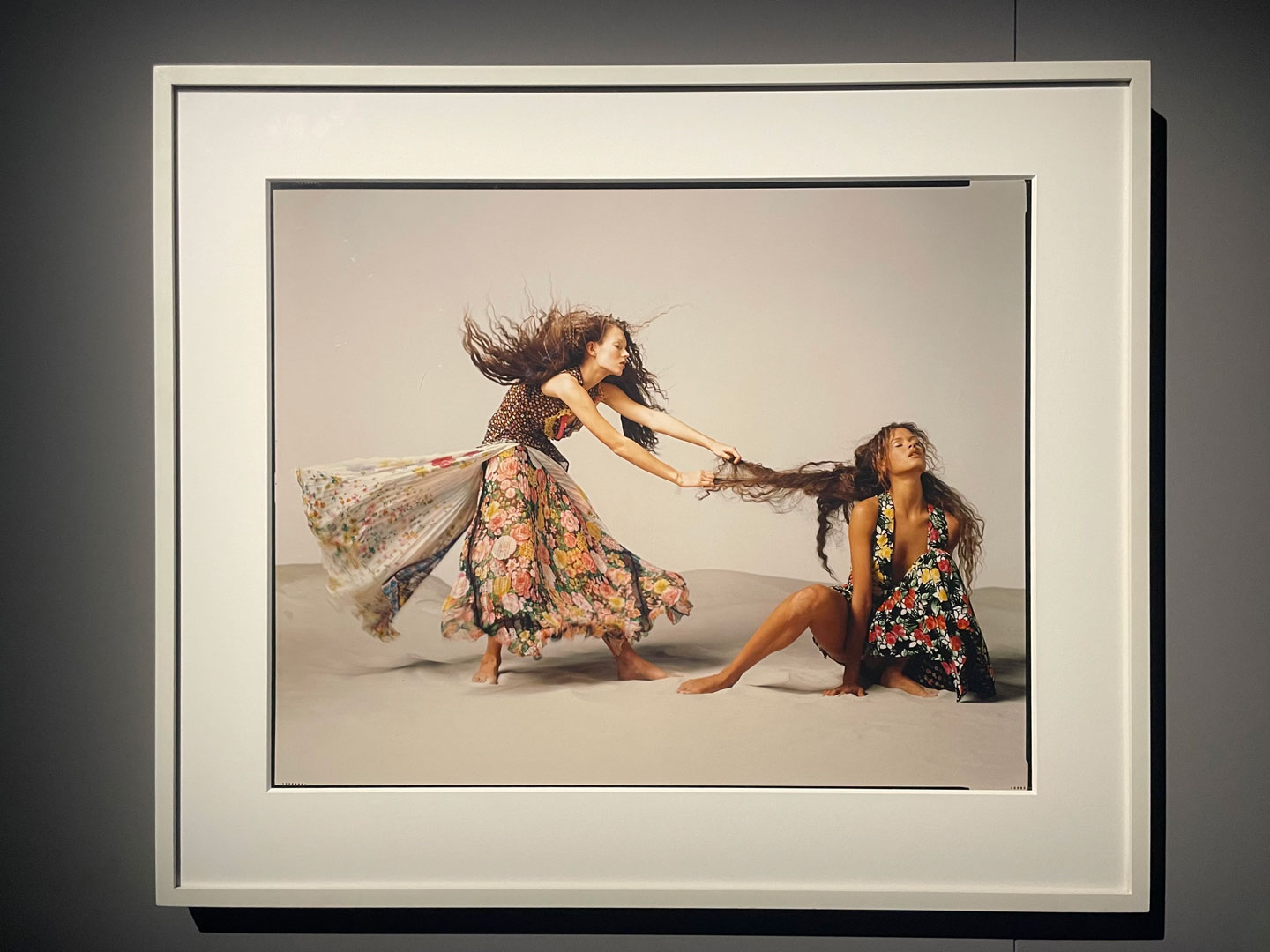 We already knew there was a love affair between fashion and art. Fashion designers have always been intrigued by form and shape, fascinated by colours, and interested in social, historical and cultural references. But if a painting and a photograph have always maintained a kind of static nature, Richard Avedon made photography dynamic with his remarkable style. What makes his works even more incredible is how Avedon romanticised fashion and captured models when they felt most beautiful.